Zen and the art of political campaigning

Reform candidate John Hagelin wishes people would pay attention to his "holistic solutions" and not his ties to the Maharishi. 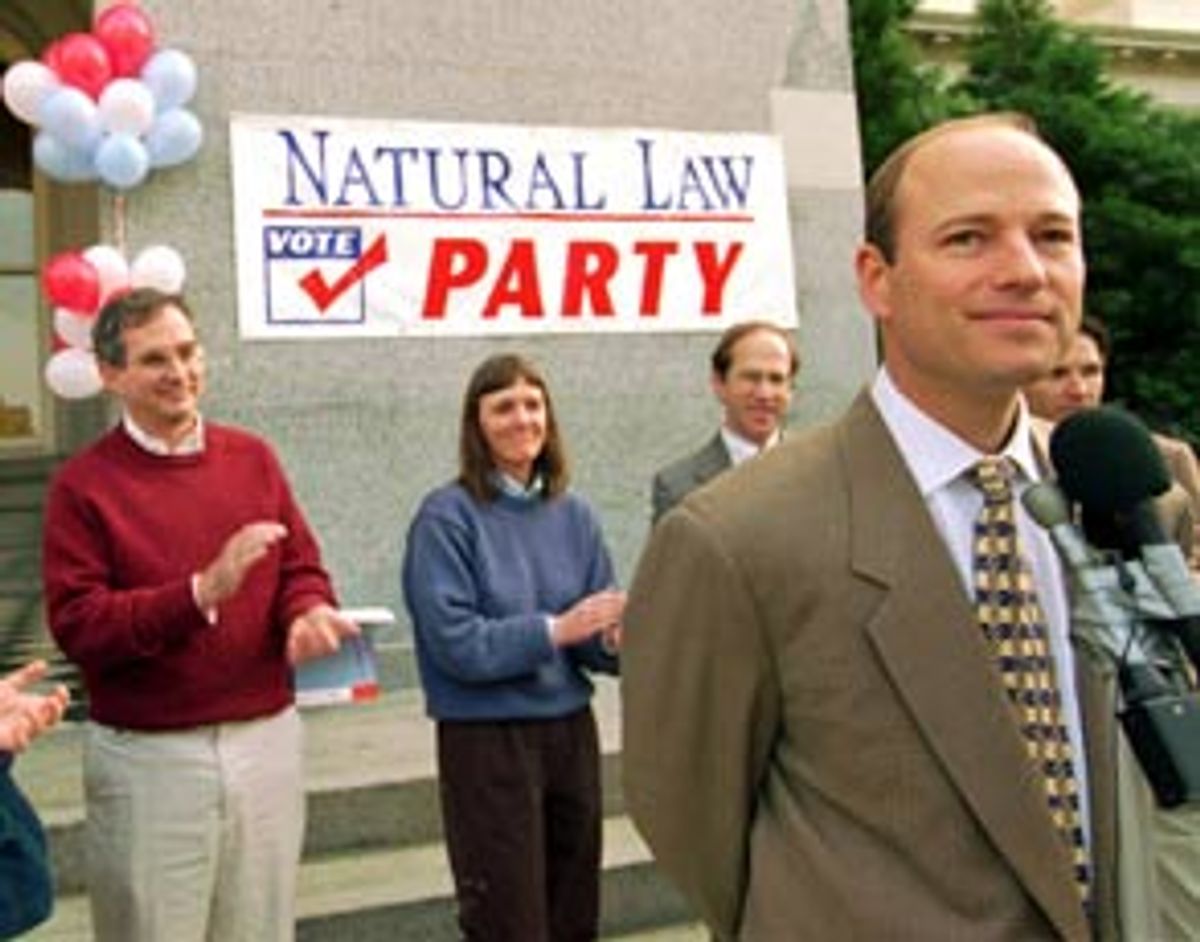 John Hagelin is the one man standing between Pat Buchanan and $12.6 million. At the moment, he is sitting at the center of a table in a booth at the tony St. Francis Hotel in San Francisco, sipping cranberry juice through a straw to wash down his lobster salad. His balding head and round, smooth face give him the immediate look of an amiable guy. He is mild-mannered and soft-spoken and calmly making the case that he is a viable candidate for president of the United States.

But there are plenty of people who are convinced that Hagelin is a grade-A nut job. He is making his third run for the presidency, with the Natural Law Party's nomination in his pocket for the third straight political season. This is his first run for the Reform Party nod. His political opponents, such as Buchanan grass-roots organizer Linda Muller, like to call him a "cult leader," no doubt because he was a faculty member of Maharishi International University until 1999.

The school was named after the Maharishi Mahesh Yogi, perhaps best known for turning the Beatles on to meditation, and allegedly getting them off of LSD, in the 1970s. The Maharishi's acolytes also once included pop guru Deepak Chopra and Hagelin, who in 1990 told Life Magazine that the yogi's legacy "will be far greater than that of Einstein or Gandhi."

But Hagelin's immediate concern is turning Reform Party voters on to his campaign. He is the only opposition on the Reform Party ballot to conservative Pat Buchanan, and the winner of the party's mail-in primary, currently underway and running until August 11, will take control of $12.6 million in federal matching funds.

Of course, most of the attention being paid to Hagelin now is being paid to him not for who he is but for who people want him to be, creating a truly symbiotic political relationship -- the man from Maharishi U. struggling for legitimacy, as a wing of the old-school Reform Party struggling to stop Pat Buchanan.

But first, Hagelin needs to break through the crackpot labels and legitimize himself to voters and the media. He emphasizes his pre-Maharishi educational background -- Dartmouth, Harvard, Stanford -- before trying to explain why he left the confines of Palo Alto, Calif., for Fairfield, Iowa, and MIU. One of his advisors helpfully points out that, while Hagelin does practice meditation, he is actually an Episcopalian.

At the lunch, Hagelin sits with five friends and confidants who have been with him since the genesis of the Natural Law Party. Some act as if they have never seen a reporter before. When one woman makes an innocuous comment about her vegetarianism, another one, worried the comment could be misconstrued, steps in like an older sister to shush her up. The Hagelin crew is downright giddy, watching intently as their friend John is interviewed by phone by the Los Angeles Times, as they each pull at the straws of their fruit drinks in front of them.

Hagelin would much rather talk, of course, about his similarities with the Reform Party than his eccentric past. Mentions of yogic flying or transcendental meditation, both parts of the Maharishi's teachings, cause a minor break in Hagelin's Zen-like expression. He's careful not to get defensive, but clearly uneasy about the possibility of another cookie-cutter story about John Hagelin, political freak show.

"I was attracted to the opportunity to allow time and encourage students to develop the brain physiology through meditation," he says of his decision to leave Stanford for Fairfield. His voice is a sing-songy, breathy voice, almost like a whisper. "It was a terrific educational experiment." Hagelin quickly defends the school's credentials, mentioning its federal grant support and its national accreditation. "It's a really high-quality institution. But its uniqueness is that it bears the name of Maharishi because he was definitely the inspiration to have a university emphasizing excellence in traditional academics coupled with innovative methods like meditation to help boost IQ."

He understands that Maharishi U. will continue to mark him as he begins his campaign in earnest. But he does cling to hope that he can ultimately transcend that label.

"You should have seen the focus in 1992. Then, meditation was so novel. By now, meditation has gone mainstream, 50 million Americans claim to practice it, tens of thousands of doctors prescribe it, the National Institute of Health pours millions and millions of dollars into researching it," he says.

Hagelin says that while his connection to the university, now called the Maharishi University of Management, "is not something I want to duck, I think it gets overemphasized and taken out of context for the sake of capturing a reader's attention."

"But you take your lumps, and you're grateful for the coverage," Hagelin says. "But eventually, you get to tell your own story." In the meantime, the Hagelin campaign's unofficial mantra to off-point questions is the slightly reactive phrase, "That is not what this campaign is about."

Hagelin talks about campaign finance reform, preventive healthcare and cutting taxes. But he also uses flowery phrases, talking about "holistic solutions" and "developing human consciousness" in a way that may go over well in San Francisco or Vermont, but still set off warning bells for most voters. But he is convinced that once voters take a look at what he stands for, they will be supportive.

"The founding principles of the Natural Law Party are fundamentally still the same: restoration of ethical principles to government," he says. "The idea of sustainable solutions, solutions that are in harmony with natural law. Harnessing natural law for soil fertility, preventative medicine, harnessing the natural healing mechanisms that uphold human health, harnessing the laws of nature."

"As a physicist I've dedicated my life to the study of natural law," he says. "I'd like to bring more of that, harnessing the laws of nature in the form of sustainable solutions in government."

The Natural Law Party was conceived in 1992, the same year Ross Perot burst onto the political scene. While Perot was waxing colloquial from underneath his 10-gallon hat, a group of followers of the Maharishi in Fairfield got together to form a political party. Their first presidential nominee was quantum physicist John Hagelin. Until then, Hagelin says, he was "a regular Republican voter, though I was smart enough not to vote the straight party line every time." But in 1992, Hagelin leapt into third-party politics and was quickly tagged as the meditating presidential candidate.

"Fairfield, Iowa, is a meditation town, so a lot of the initial focus of the party was on its origins," Hagelin says. "But even then, the party was never meant to be a single-issue party. It was meant to be a broad-based centrist alternative to the Republicans and Democrats."

Hagelin does still believe that meditation is part of the ultimate solution to solving the world's problems. But he encourages skeptics to look to scientific studies that he says support his theory that meditation is a useful stress-reducing technique, both on an individual and societal level. Recently, he advocated sending meditation experts to Kosovo to help resolve the Balkan conflict.

There is a sort of charm in the naiveti of the Hagelin campaign. His campaign brochures literally show Hagelin's head in the clouds. A photo of a sunrise over a wheat field illustrates Hagelin's pitch for sustainable agriculture. The 12-page pamphlet is peppered with inspirational slogans such as "There are no limits to what we can achieve," as well as the adoption of Perot's slogan, "United We Stand."

He is balanced within the Reform Party by Buchanan, who is serious about building a right-wing political party within the Reform Party, and plays bare-knuckle politics to do so. The ongoing internal maneuvering within the party is nonstop, and is now ready to spill over into the courts. To be sure, Hagelin has plenty of people on "his side" fighting every bit as hard and dirty as Buchanan. Whether Hagelin is clued in to all the details and machinations remains unclear.

"It's unfortunate, but I think it's unavoidable. The nature of any [Buchanan's sister and campaign manager] Bay Buchanan campaign is it's going to be bitter and it's going to be divisive," he says. "I try to stay above the fray as much as possible. I'm not issuing any volleys. I'm just deflecting them and defending the process."

That's good, because a more rabid offense would certainly conflict with his essential political message: Chill out. Everything in the Natural Law Party platform -- from "family values" to abortion or crime prevention -- includes language about stress reduction and harmony. All the more ironic considering he is in the middle of the nastiest internal political fight going.

For leftover Perot loyalists who do not share Buchanan's social agenda, Hagelin is their Obi Wan Kenobi, their final hope. The years since 1992 have shown a slow deterioration for the Perotistas who wanted a party that was mum on social issues and now they find themselves on the verge of what some are calling a hostile takeover by someone who puts social issues on the front burner. In 1992, Perot emerged with a real chance at capturing the White House. Today, the party is struggling for survival.

After trying in vain to draft Perot to run against Buchanan, Reform Party secretary Jim Mangia, a Perot supporter since 1992, is one of those leaders who has turned to Hagelin. Mangia, who is gay, was the focus of a verbal attack he thought was homophobic from one of Buchanan's supporters. He's made it clear that he will go to any length to stop Buchanan.

But sitting at the St. Francis, watching the Natural Law Party crew huddled around the table on a horseshoe-shaped banquet, there is a sense that all of this infighting goes on in an orbit around Hagelin. Perhaps that is only because he is the polar opposite of Buchanan's fire-breathing persona. Or perhaps it's just a prejudice that a quantum physicist from Maharishi U. is not really capable of playing hardball politics. Or maybe it's just the old adage about politics and strange bedfellows that forces people like Mangia, who views Buchanan as a borderline fascist, to turn to strange places to play defense.

When asked what the one major issue for his campaign is, Hagelin quickly picks a no-brainer for an outsider: campaign finance reform. "That really is the linchpin for all these other issues," he said. "Until I achieve that, I cannot expect to have a Congress that would be accountable to the people."

But when asked whether he will come to be known primarily as a campaign finance crusader, Hagelin is apprehensive. Being known as a one-trick pony seems antithetical to who Hagelin is. "I hope they get to know me as the scientist who supports foundational solutions, core solutions to the nation's problems," he says.