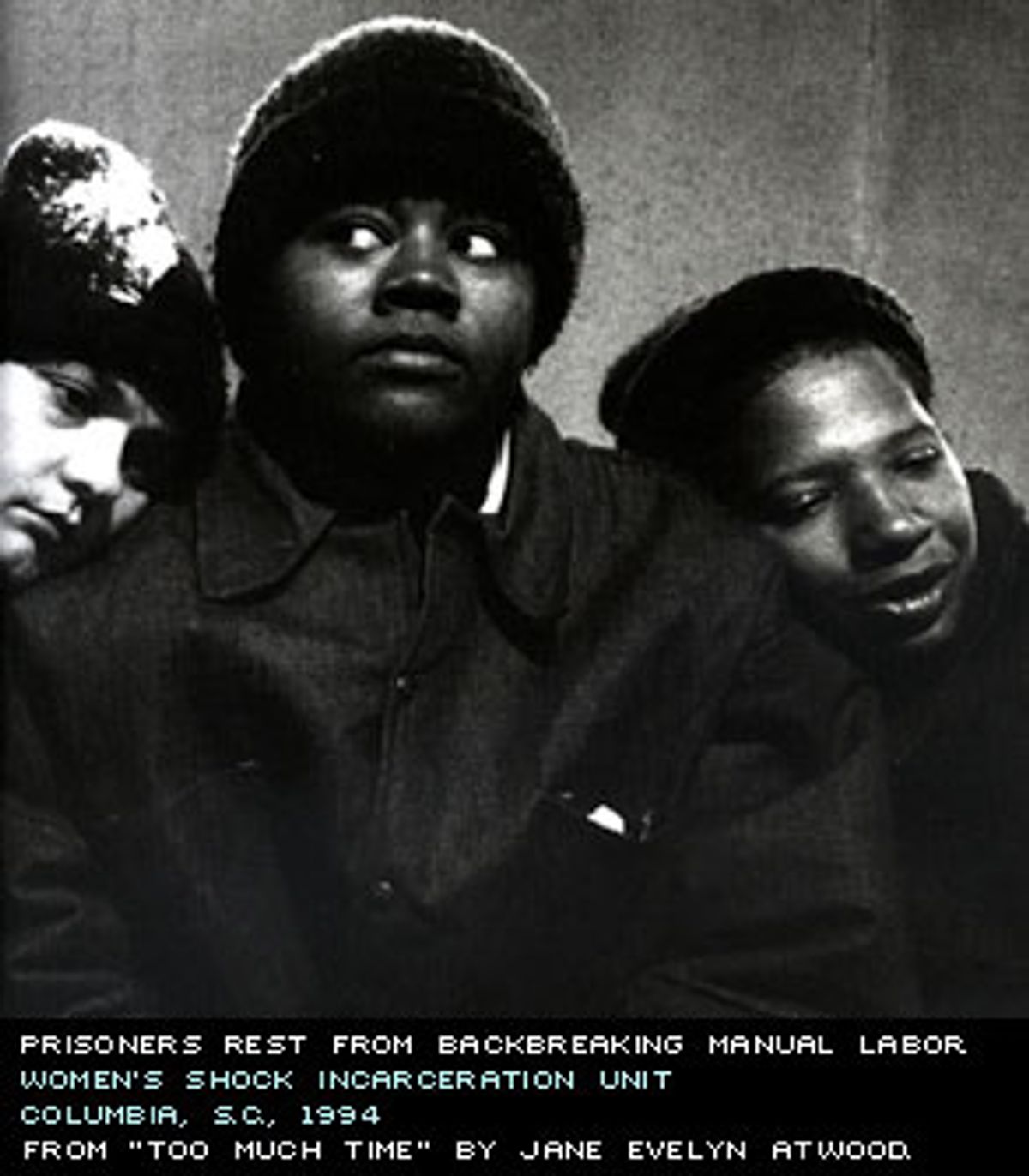 Natasha Gaines came home recently to find an urgent message from one of her mother's lawyers: President Clinton had just commuted the sentences of four women and one man serving long prison terms for conspiracy under mandatory-sentencing drug laws. It was good news, attorney Tracey Hubbard assured Gaines, whose mother, Dorothy, is serving a 19-year sentence in Tallahassee, Fla., for conspiracy to distribute crack cocaine. If Clinton had been moved by these women's stories, perhaps he would grant Dorothy's application for clemency. Maybe her mom would finally be allowed to come home.

But Natasha wasn't sure just how hopeful she should feel. Like the four women pardoned by Clinton, her mother -- like tens of thousands of other women -- was sentenced to prison as a drug "conspirator," guilty of little more than having a man in her life who was involved with drugs. Clinton's decision to commute the five sentences received relatively little attention. There was no White House press conference and no press release.

Unlike his better-publicized grant of clemency to 12 Puerto Rican nationalists last year, which was perceived by some as an effort to win votes for Hillary Rodham Clinton in New York, Clinton's pardon of the drug "conspirators" appeared to have little or no political value as far as the White House was concerned. And political value is something that Dorothy Gaines and her daughter would understand. Political value has a lot to do with why Dorothy is in prison in the first place.

What the White House didn't say when Clinton ordered the release of Amy Pofahl, Serena Nunn, Louise House and Shawndra Mills is just how unremarkable -- and how political -- these women's cases are. This was not a case of a president extending clemency to prisoners whose convictions were reached in error or were uniquely unfair. Their convictions (and prison sentences) were completely routine under the federal conspiracy provisions passed as part of the mandatory-sentencing movement of the late 1980s.

In fact, mandatory sentencing and conspiracy provisions have contributed to a boom in the female prison population that is unprecedented in its scope, and devastating in its impact on children and families. Female prisoners are now the fastest-growing -- and least violent -- segment of the prison population nationwide.

According to a December 1999 report from the General Accounting Office, the number of women in prison has increased fivefold in the past two decades, from 13,400 in 1980 to 84,400 by the end of 1998. Between 1990 and 1997, the number of female inmates serving time for drug offenses nearly doubled; in the federal prison system, a staggering 72 percent of female inmates are serving time for drug offenses. The U.S. Sentencing Commission reports that 1,199 women were sentenced to federal prison on conspiracy charges in 1999, out of a total of 3,001 sentenced for drug trafficking in general. Given the length of the sentences mandated, that means that tens of thousands of women are in federal prison on charges similar to those of Pofahl, Nunn, House and Mills.

In its report, the GAO attributes much of the increase in the female prison population to "tough on crime" measures such as mandatory sentencing. Mark Mauer of the Sentencing Project in Washington agrees; in his recent book, "The Race to Incarcerate," he blames a shift in philosophy about the purpose of incarceration -- from rehabilitation to punishment -- for the move away from indeterminate sentencing (10 to 20 years, 15 to life, etc.) to mandatory minimums.

Rehabilitation, after all, is a mysterious and unpredictable process: Who can say how long it will take? For that reason, says Mauer, a sentence intended to rehabilitate was seen to require some built-in flexibility. Once offenders began to be defined exclusively in terms of their criminal acts, and the function of incarceration came to be seen solely as deterrent and punishment, such flexibility was no longer required. Enter mandatory minimums.

The 1986 Anti-Drug Abuse Act, passed at the height of the crack epidemic and signed by President Reagan just a week before Election Day, established most of the drug-related mandatory sentences currently in effect. The 1988 Omnibus Anti-Drug Act upped the ante, adding mandatory sentences for simple possession of crack cocaine and changing the drug conspiracy penalties so that a co-conspirator faces the same penalties as the person who actually commits the offense.

This is how mandatory sentencing works: If you are found to have possessed or distributed a specific amount of a particular substance, you will serve a legislatively mandated number of years, regardless of the circumstances of your crime, your character or any other mitigating factors. The judge has zero discretion and must impose whatever sentence the legislature requires.

Conspiracy laws represent perhaps the nastiest twist in the mandatory-sentencing statutes. Under mandatory sentencing, people who sell even small quantities of drugs can wind up with brutally long prison sentences. Under conspiracy laws, those who don't sell drugs -- who merely have the bad fortune, or judgment, to be associated with people who do -- can wind up with those same sentences.

The "conspiracies" that lead to these convictions rarely involve overt plotting and scheming to distribute large quantities of drugs. For a woman whose husband or boyfriend is involved in the drug trade, conspiracy may consist of having drugs in the house, taking phone messages from drug associates or driving the husband or boyfriend to the bank where he makes an illicit deposit. In some cases, prosecutors have not been required to prove that a "conspirator" knew she was committing any of these acts; a finding that she should have known what her man was up to has been enough to secure a conviction.

Eric E. Sterling, now president of the Criminal Justice Policy Foundation in Washington, was counsel to the House Committee on the Judiciary from 1979 to 1989, advising the committee on its anti-drug efforts. As such, he had a front-row seat as all this came to pass.

At the time mandatory minimums were enacted, Sterling says, he thought they were a bad idea, but he had no idea just how damaging they would prove to be in practice. Congress' intent in passing the laws, Sterling says, was "to give the Justice Department the tools and the impetus to prosecute the most important drug traffickers."

But the legislation was passed without hearings and Congress made some crucial errors that have allowed today's abuses, Sterling says. Mandatory minimums are based on a rigid schedule of "triggering quantities" of drugs that determine the length of a particular sentence. Many of the quantities are ludicrously low, leading to the prosecution of minor players as major kingpins.

This happened, says Sterling, in part because members of Congress knew very little about drugs, and without the benefit of expert testimony that hearings would have provided, they wound up with a fairly random set of numbers. Another problem, according to Sterling, is that those writing the legislation "didn't speak metric." Says the attorney, "Most members of Congress might have trouble telling you if a milligram is bigger than a kilogram."

When the conspiracy provisions were tacked onto the mandatory-minimum laws two years later, even less attention was paid to their potential impact. "To say that there was congressional intent would be to give too much significance to the way in which it was processed," Sterling says. The provisions attaching the same mandatory minimums to conspiracy as to drug trafficking itself were "characterized as a technical correction," Sterling says, and passed with very little notice. "They have resulted," he adds, "in the additional ensnarement of minor participants in drug offenses and in their being treated as though they were the central kingpins."

While this result may have initially been unintended, Sterling notes, Congress has very little motivation to undo its error. "First of all, the Congress in general is indifferent to claims of injustice and inequity in cases of accused persons," Sterling charges. "Secondly, [conspiracy laws are] a very powerful tool for eliciting testimony and coercing guilty pleas. The final reason is that any vote that would have the effect of lowering penalties for drug offenses runs the risk of being characterized as 'soft on drugs.'"

The fact that four out of the five prisoners whose sentences Clinton commuted were women is no coincidence. While women are actually slightly less likely than men to be sentenced on conspiracy charges, when they are, it is often because they are not involved in a major way (or at all) in the drug trade.

Under mandatory-sentencing laws, the only way a person charged with a drug offense can get a sentence reduction is to help prosecutors build a case against someone else. Many women who wind up serving time on conspiracy charges are doing so because of the testimony of boyfriends or husbands who won sentence reductions for themselves on the basis of this testimony. The less involved a woman actually is, the less she has to offer prosecutors -- and the more likely she is to do serious time.

The women whose sentences Clinton commuted have stories that are as appalling as they are typical. Amy Pofahl didn't know that her businessman husband, Sandy, was a major ecstasy importer until after he was arrested in Germany. When Sandy asked her to help him retrieve hidden drug profits so he could post bail, Amy complied. When Sandy offered testimony against various of his associates, he threw in information about Amy's involvement with his finances. Sandy did four years in prison; Amy was sentenced to 24.

Serena Nunn's story is also typical. At 19, she got involved with the son of a drug dealer. Her role in his drug activities consisted of driving him to an occasional meeting, but because she refused to testify against him, she received a 16-year sentence.

Among the women currently serving decades-long sentences on conspiracy charges are many others with similar tales to tell. According to the advocacy group Families Against Mandatory Minimums, they include: