Memo to Al: Never mind what everyone's trying to tell you. Your ideal running mate is Massachusetts Sen. John Kerry. 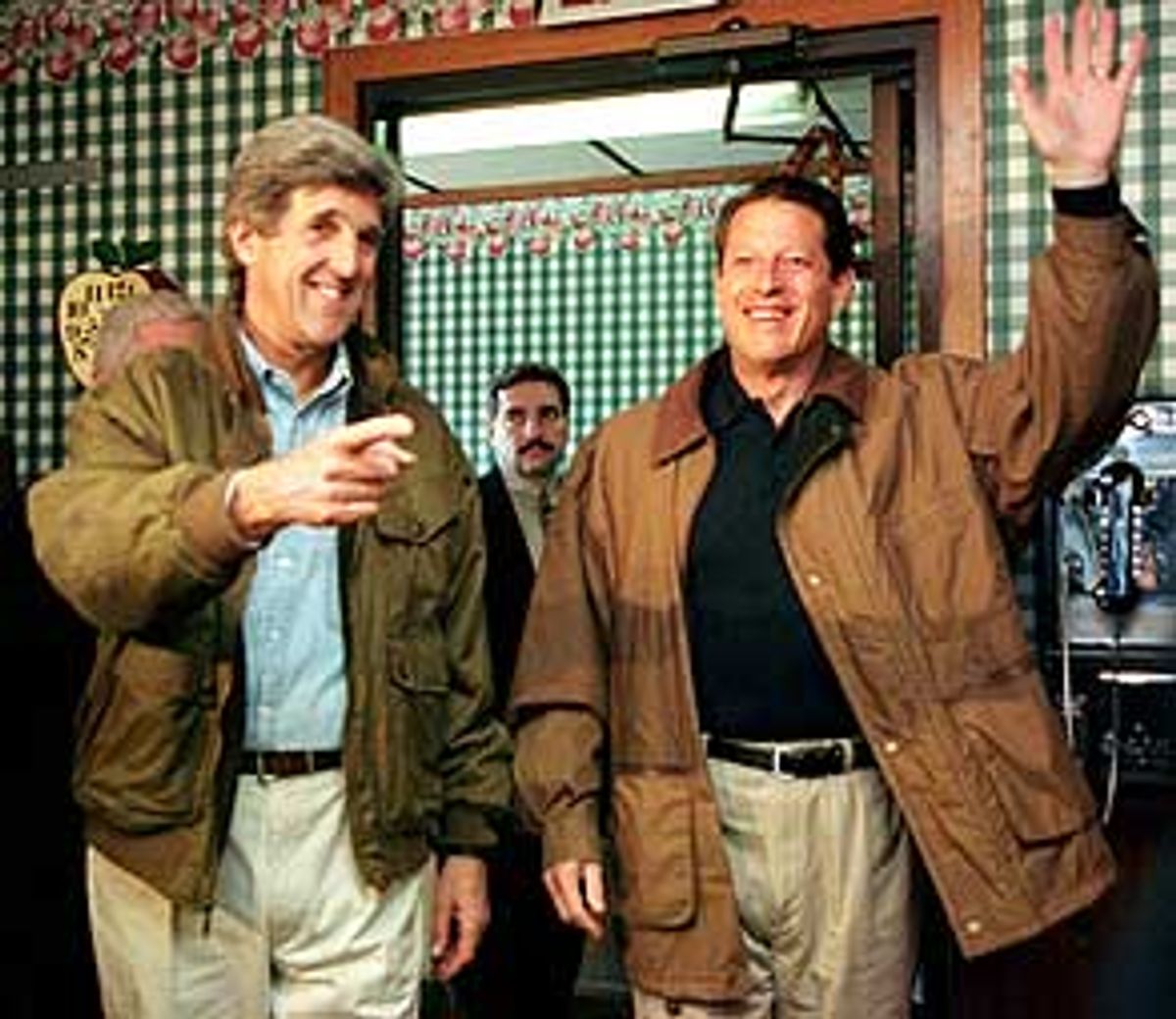 Forget everything you've heard about whom Al Gore should pick for veep. It's not Dick Gephardt, the would-be speaker of the House who took himself out of the running this week, even though his appearance on the ticket might help lock in labor support. It's not Sen. Bob Graham, the avuncular Floridian who might play with Dubya's mind by making him work hard for the Sunshine State, where his brother Jeb is supposed to run the show. It's not Dick Durbin, who could help in Illinois. And it's not Evan Bayh who might help in ... well, just where would he help? Forget the lot of them.

The best person for Gore to pick for veep is Massachusetts Sen. John Kerry.

Kerry isn't exactly a household name. You might even be confusing him with Bob Kerrey, the notoriously anti-Gore Nebraska senator, who's been shooting spitballs at the vice president for a year now. John Kerry is the junior senator from Massachusetts, a Democratic stronghold that would require Gore's running through several White House interns to lose.

So why Kerry? Gore should pick Kerry, in part, because Clinton picked Gore. When Clinton chose Gore in 1992 he broke with almost every rule of vice-presidential selection. Gore offered no regional balance: He came from a neighboring state, Tennessee. He offered no ideological balance: He was close to a carbon copy of Clinton, a border-state New Democrat. At best, he gave Clinton some Washington credibility he lacked. But Gore was a great pick.

What Clinton did was do away with the notion that the vice presidency is a cardboard prop a presidential candidate uses to cover up his own deficiencies. And that was a good thing, because it was outdated thinking from a bygone era when the vice presidency was one of the more inconsequential of government posts.

For better or worse, Bush seems to be sticking very closely to this old-fashioned logic. Almost every possible veep choice the Bush people have mentioned is intended to balance the ticket in one fashion or another. Ticket balancing made more sense in the old-old days when the veep slot was used to appeal to party activists and functionaries more than to voters. In the modern, more image-driven presidential game the balancing model can sometimes leave the nominee telling voters, in essence, "Hey, if you like me, you're just gonna love this guy who's nothing like me." How does that work exactly?

Pundits often note that George Bush was the first sitting vice president to win the White House since 1836. What they seldom mention is that few of them even tried. For most of our history the vice presidency was filled by stand-ins and mediocrities. So long as the president didn't die in office the vice president simply walked off into obscurity when his time was through. Today a veep is a likely successor, or at least a future party nominee. Voters know that, and they see the candidate in that light.

The bottom line is that the nominee and the veep should be a unified team. The veep choice shouldn't balance the message the top guy (or gal) conveys: He or she should reinforce it. That's what made picking Gore a masterstroke: his very similarity to Clinton. It gave the Democratic ticket a coherent and unified message, and it signaled on Clinton's part a confidence about who and what he was. That's exactly what a modern vice-presidential pick should do. And Gore fit the bill.

Here's why Kerry does the same for Gore.

First: ideology. Kerry is a centrist, progressive Democrat in the same way Gore is, in the same way Clinton is: not in a wishy-washy kind of way, but the kind that manages to combine elements of both. Of Bill Clinton's many political gifts, none has been greater than his ability to mold together New Democrat and Old Democrat elements in the same political mix, and do it in a way that doesn't appear forced but, somehow, holds together. Gore doesn't manage the amalgam quite so deftly, but he's the inheritor of that ideological legacy.

Kerry is a similar sort of figure. He is difficult to pigeonhole on either the right or the left of the Democratic Party, but his mix of policy positions works as a unified whole. He's got good liberal credentials, and he's also got good (actually, increasingly good) ties to the New Democrat wing of the party.

Some of this complexity shows through in his biography. Take an example from Kerry's young adulthood: After graduating college Kerry enlisted in the Navy and served as a gunboat officer in the Mekong Delta, earning three Purple Hearts and a number of other medals along the way. Then, after leaving the Navy, he became the leader of Vietnam Veterans Against the War, a key antiwar group. He's unassailable. No one can gainsay his courage or patriotism; yet he's got perfect credentials for anti-war types. For a Democrat, you just can't get a better record than that. Kerry's mix of political views doesn't match that dramatic flair, but for a Democrat in the year 2000 they make for an equally good combination.

Second: temperament. Kerry is intelligent, knowledgeable on policy, attractive and articulate -- like Gore. Also like Gore, he's no glad-hander, or emotion-gusher like Bill Clinton. He's not stiff and wooden exactly, but more cool and perhaps a touch distant. But for Gore's No. 2, that's a good thing. Kerry is a deceptively good campaigner, as he demonstrated when fending off challenger William Weld, then the most popular pol in Massachusetts, in 1996. Like Gore at his best, Kerry oozes experience and seriousness of purpose. And maybe a little unlike Gore, he's got flair.

Third: He just looks the part. And that matters more than you might think. Kerry has the look of a future president, and it's no secret he'd like to be one. Graham could help a bit in Florida. But does anyone think Graham would have any hope or chance of being a president unless Gore puts him on the ticket? Or that the party faithful could get excited about the idea of Graham (who'll turn 64 a couple days after the election) as a future president? Of course not. Graham's an impressive figure, but not a future president, or the equal partner a modern veep candidate should be. Dick Durbin of Illinois? Same thing. He might help a bit in Illinois (and he'd probably be the second-best pick), but he lacks Kerry's punch and style.

Kerry has his shortcomings, as every pol does. His second wife is heir to an almost billion-dollar fortune, and that will get him a little ribbing. Kerry's a bit of blue blood, or as they call them in Massachusetts, a Brahmin. And Kerry's choice won't electrify the press the way someone like Colin Powell would for Bush. But Kerry would be a deceptively strong choice, and voters would warm to him the more they got to know him.

Ask Bush or Gore what's important in a vice-presidential nominee and they'll give the same old tired line about being ready to take over as president at a moment's notice. That's all spin, of course. But there is also a certain truth buried in that old, tired answer. The No. 1 qualification for a modern veep is whether they're really presidential material. Not because the president might die, but because that's what voters really want to see in a veep. And that's why John Kerry's the man for Gore.