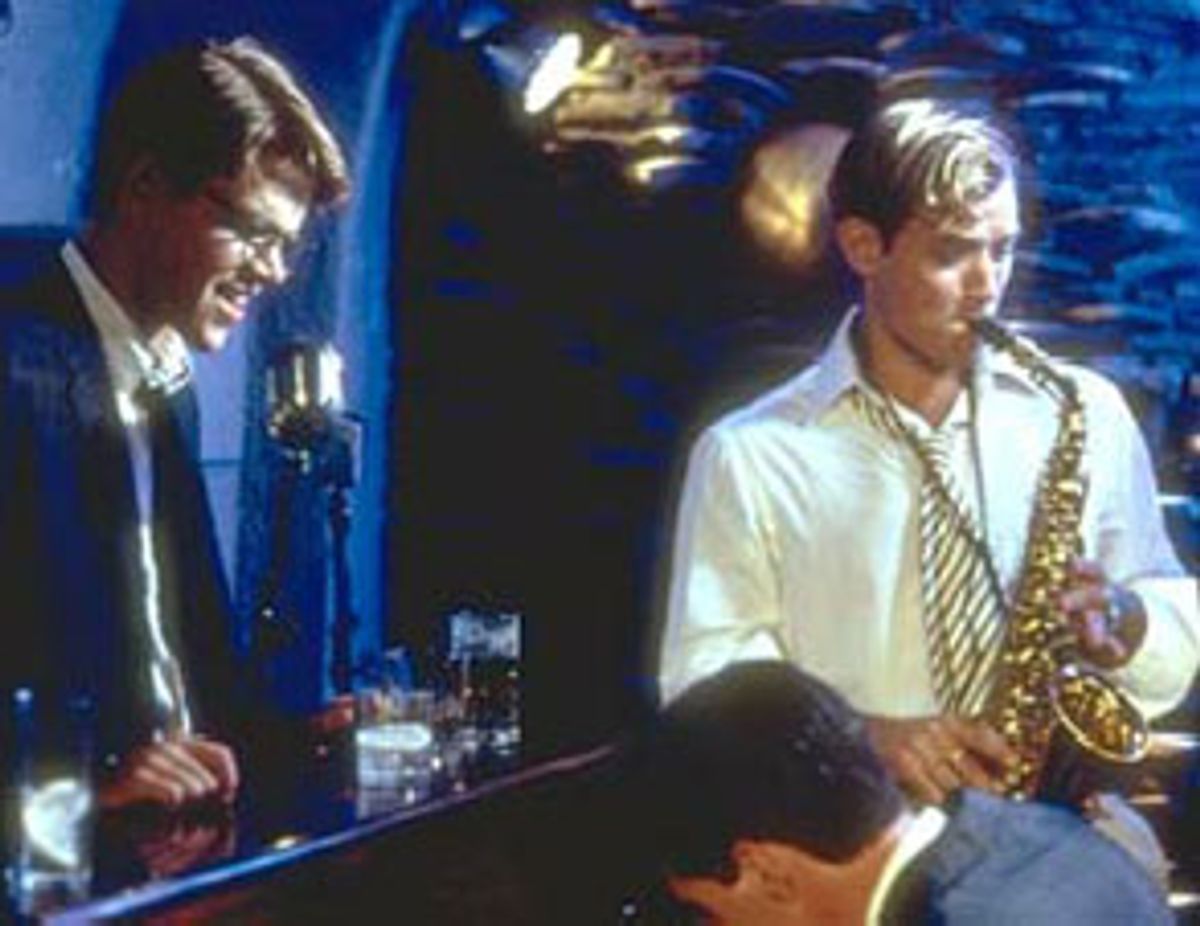 Last year's "The Talented Mr. Ripley" stays with me, and builds. I think that's because its themes of attraction and hostility are so intertwined. So I thought I'd examine one of its key sequences in detail.

Long before he understood, when Tom Ripley was learning jazz so as to be more like Dickie Greenleaf, he played Chet Baker singing "My Funny Valentine" and muttered in his hurry that he didn't know whether it was a man or a woman singing. Now Tom has been initiated, as an "Americano," at Vesuvio, the jazz club in Naples, Italy, and he is so "in" with Marge and Dickie that Marge says, half ironically and half with real uncertainty, that they must make sure to invite Tom on their honeymoon.

Marge is a pointed name for the 1950s, and Gwyneth Paltrow gives her the pale oily look that isn't quite butter. Marge is a writer, she says, but she doesn't see much yet. She doesn't see the malice in Silvana, the local girl, the one Dickie's had already, the one who needs to talk to Dickie. We see it; Tom sees it. But Tom, by now, gets Dickie so well, is so inside the spiteful hedonism, he does deserve him.

You hear Baker's muted, exhausted trumpet over a few "happy" scenes -- Marge buying fruit from Silvana; Dickie playing boccie in the town square; and then Dickie on the Vespa, careening down the hill to Naples, Tom behind him, holding on. "You're breaking my ribs!" squeaks Dickie.

Dickie Greenleaf! What a name! He could be Mr. Money -- all those unused dollar bills -- or Jewish even. He could be some sprite of herb and wildflower in a children's book of fairies. But Dickie's dumb, too. You can't quite get Jude Law's great performance without seeing how slow Mr. Alive is, or noting how little he sees and how much Tom is watching. Dickie's always posing for his own picture, shooting dark, sunburned glances here and there -- such a tough flirt, he'd knock your teeth out if you gave him the wrong look back, or if he understood it. Whereas Tom is still that pale, squashed empty life waiting to pick up warmth from being looked at by Dickie.

Then we're in Naples, at Vesuvio, after hours -- just the small knot of musicians. Tom is singing "My Funny Valentine," doing Chet Baker comprehensively, and Dickie is playing alto sax behind him, the way Lester Young sometimes played behind Billie Holiday. And all at once you face the terrible, banked-up passion in Tom that only wants to be someone, anyone, as he puts together such a tricky summer getting close to Dickie. And then, in the very act of singing about a "funny" -- funny ha-ha or funny peculiar? -- valentine, he's found the part of himself he half dreaded, half hoped for, the hero-worship part, the melancholy gayness, that part of him charmed by the stupid Dickie, the cad, the loudmouth, the prep school thug, the golden Mr. Greenleaf. Even if it means killing him someday when he proves too stupid to be endured.

That was the other thing about Chet Baker -- who knew whether he was dead or alive?