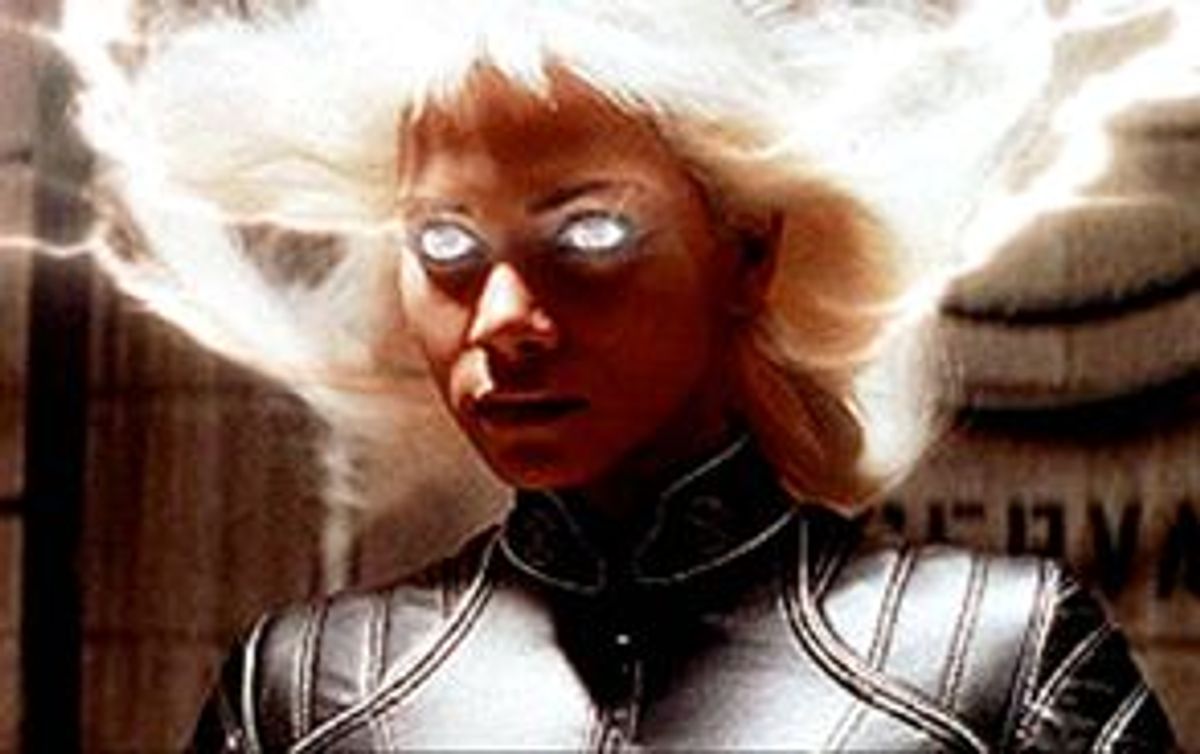 When director Bryan Singer's big-screen take on Marvel Comics' genetically enriched superheroes hit 3,025 megaplexes last weekend, an anxious 20th Century Fox was praying for a hit to save its ass. Things didn't look so good. The summer had started out strong, with "Big Momma's House" scooping up $110 million to date. After that, business had quickly gone south.

Fox's animated fantasy "Titan A.E." crashed and burned; Jim Carrey's schizoid "Me, Myself and Irene" ($80 million to date) is falling well short of the Farrelly Brothers' "There's Something About Mary" ($178 million). And in the middle of everything, Rupert Murdoch summarily axed Fox chairman Bill Mechanic, a man widely considered to be one of the few straight-shooters and genuine risk-takers in the business (quite a compliment in this town).

Based on pre-release tracking studies of potential moviegoers -- Joe Farrell's National Research Group provides the raw data, which the studios then subject to their own analyses -- Fox was cautiously predicting a $30 million to $35 million "X-Men" opening. Cautiously.

Fox had at least demonstrated some fiscal prudence. Singer's movie happens to be a relatively cheap piece of filmmaking. Fox insisted that the director (who made 1998's commercial dud, "Apt Pupil," after a promising start with 1995's "The Usual Suspects") work on a pared-back $75 million budget; its two top stars, Patrick Stewart and Sir Ian McKellen, are hardly high-paid matinee idols.

It turned out to be a good investment. In its first weekend, "X-Men" earned $54.5 million, immediately replacing "Men in Black" (1997) as Hollywood's biggest July opening. Even more impressively, it posted the sixth-biggest three-day opening on the box-office sheets. And since the top five movies that it trails -- ranging from "The Lost World" ($72.1 million) to "Austin Powers 2" ($54.9 million) -- are all sequels, it can boast it's the best-opening non-sequel ever.

So what could have possible fueled such an "X-Men" frenzy?

How about the Net?

Based on comic series created in 1963 by long-time Marvel cartoonists Stan Lee and Jack Kirby, "X-Men" had scooped up a lot of fans over the years. Some of the more hardcore variety eagerly monitored the movie as it moved into production with a proprietary sense of involvement. Vancouver, British Columbia, webmaster Patrick Sauriol's Coming Attractions began stalking the project in '96 -- and the earliest posts from obsessed fans were more flames than plaudits. Reacting to the news that Singer had taken on the job of bringing this unusual brood to the screen, one anonymous poster ranted in '97, "Why the heck are you guys getting so excited about this X-Men film? This is a director who hates comic books ... this film is going to be a true disaster ... take that from someone who has been in the room with the producers, people who are truly without a clue."

Sauriol, who eventually compiled 11 archives and over 100 screen pages of detailed exegesis devoted to the film, claims "X-Men" certainly got more attention from the Internet community than any other movie this summer. "For a long time, people didn't know what to make of it," he says. "The bad rewrites and last-minute reshoots put worry into the minds of a lot of fans. When we broke the costume designs, people were saying, 'Oh, no, it's just a 'Matrix' rip-off.'"

Naturally, Fox executives have likened their own efforts to build a Web presence for the movie to Artisan Films' successful Internet campaign for "The Blair Witch Project." But "Blair Witch" came out of nowhere; with "X-Men," Fox had to find a way to channel all that untamed "X-Men" energy already coursing throughout the Web.

"What we strived to do with 'X-Men,'" explains Jeffrey Godsick, Fox's executive vice president of publicity and promotion, "was launch a new phase for movie Web sites in general. Most sites attract fans for just about two weeks before a movie opens and two weeks afterwards. We wanted to build online communities that would sustain the fans for months."

Last September, the studio triggered a semi-stealth campaign, erecting the Mutant Watch Web site, a virtual parody of a flag-waving political Web site, ostensibly devoted to a campaign by the McCarthyesque Sen. Kelly, the fictional politico played in the movie by Bruce Davison, to protect America's children from the mutant threat. Readers were invited to turn in their mutant friends -- and, even more importantly, to hand over their e-mail addresses to the Fox marketers.

Then, in April, Fox launched its official "X-Men" site. Again, this featured lots of interactive lures: To enter "Xavier's School for Gifted Youngsters," surfers were invited to take an "entrance exam" that would identify their genetic enhancements; different readers were granted access to specific rooms, but if they wanted to explore the whole school site, they needed to trade identities with friends.

"The marketing around the Mutant Watch phenomenon was hip and smart," says Sauriol, though he judged the official site "disappointing. It took too long to watch. It tried to be slick without enough substance."

The studio didn't stop there, though. It also offered materials to existing fan sites like Counting Down, the site that grew up around "Star Wars Episode One: The Phantom Menace." McKellen, who maintains an extensive site of his own, jumped into the act, publishing an on-set diary and providing chatty responses to readers' e-mail queries. "Patrick Stewart squeezed my shoulders once during the first reel, which I took as a compliment," he reported of the movie's premiere on New York's Ellis Island. Fox has now turned its "X-Men" site into a virtual auction house: Wednesday morning, Cyclops' battle uniform had been bid up to $15,260, while Magneto's worn socks could be had for a mere $77.50. Mutants, indeed.

Exactly how much did the Fox sites contribute to the movie's opening? Opinions differ. "If you'd asked me that question before we opened, I wouldn't have been able to tell you," says Godsick. "But they clearly had some impact. In our exit polling, 27 percent of the people we polled said they'd visited the 'X-Men' Web site, and among the self-identified fans, 50 percent had visited the sites. There is no norm for that, but those figures are extremely high."

Of course, it all could have blown up in the studio's face if the movie hadn't delivered. Bad buzz spreads on the Web faster than kudzu. And given that its final post-production crunch delayed the movie's completion, there wasn't much time to get the potential good word out. The first screening of a final print for junketeering press didn't take place until July 6. But like a town crier, the Web leaped into action. Coming Attractions immediately posted three reviews, based on that first screening, and the ecstatic reactions ranged from "one of the BEST movies I've seen in a LONG time" to "this movie is going to be THE HIT of the summer" to "AWESOME!" As Sauriol sums it up, "About a week and a half before the movie opened, opinion on it really changed."

For the moment, the 'X-Men' Web campaign is the new gold standard for effective Internet hype -- even if New Line's elaborate "Lord of the Rings" setup is already nipping at its heels. As for the future, Godsick predicts, "We're looking to try and develop a true long-term and strategic campaign for every movie. It doesn't need to be a movie with a built-in fan base. It's safe to say that next summer, 'The Planet of the Apes' will have a huge Internet presence."

Time to teach monkeys to type.