From Cheney, to Danforth, to Keating, to Cheney: The search for No. 2 is one smartly run circus. 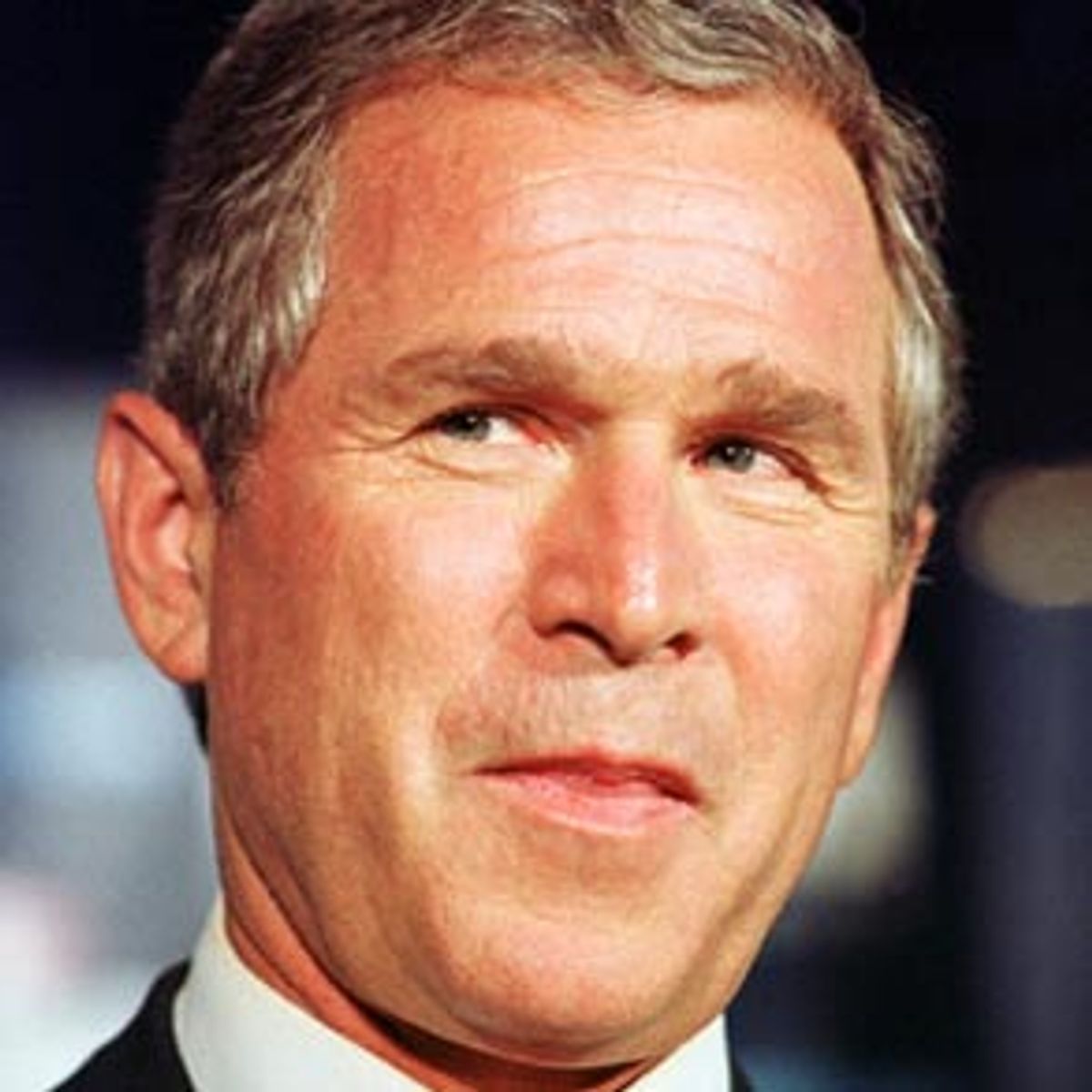 The Bush campaign's game of Vice Presidential Mystery Date is over, after having been masterfully played. Seldom have so many written so much about so little -- with the cumulative effect of keeping Gov. George W. Bush constantly in the news as the man picking his No. 2, even if there's no actual news of determined significance, which would be that someone had actually been selected.

Like Aquaman after going almost an hour without contacting water, editors, bureau chiefs and producers are frenzied for any small drop of information; the latest, a Washington Post "exclusive" on its Web site, that says, according to "a senior Republican source," that Bush had selected Dick Cheney, the former secretary of defense and former Wyoming congressman, "as his likely choice."

The Post story's headline ("Bush settles on Cheney") was as certain as the story itself was qualified, reporting that Bush "could" make the announcement on Tuesday "barring an unforeseen change." The Bush campaign had no comment.

Then the day ended on an even more breathless note, with a statement from Karen Hughes, Bush's communications director:"Governor Bush tonight said he has made his decision on a vice presidential nominee but has not yet notified that individual or told anyone else about his choice."

This protracted guessing game has created such glowingly positive press for Bush that some members of the press have been extra-sensitive to charges that they just helped the Bush campaign through a protracted series of selected leaks, serving to float nominee Cheney as a trial balloon, unlike the ton of bricks that was the announcement of Dan Quayle.

Others believe the press helped the Bush campaign make what White House chief of staff John Podesta -- on ABC's "This Week" -- called "an elaborate head-fake" to draw attention away from Arizona Sen. John McCain, who, it had been reported last week, would be willing to serve as Bush's running mate if asked.

Were the Bushies responsible for changing the subject? The buzz that the man Bush put in charge of the veep search, Cheney, might have picked himself, began on Friday. NBC's Lisa Myers reported that Cheney had changed his voter registration, renewing his Wyoming residency, thus avoiding any potential constitutional problems at next week's GOP convention, since both he and Bush are both Texans, and Cheney has lived in Dallas since 1995. (The Constitution would prohibit electors from Texas to cast their ballots for a ticket featuring two candidates who "inhabited" Texas.) On Sunday's "Meet the Press," host Tim Russert called in Myers to refute "the political folks saying, 'Well, the Bush people put out the Cheney-going-to-Wyoming story ... because it would step on" the McCain buzz.

Myers said that she "did not have any tip of any kind from the Bush campaign." So what happened? An oddly detailed -- and somewhat defensive -- explanation followed:

"I was sitting in my office thinking, 'Where can we find some kind of footprints on what Bush is up to?'" Myers said. "And I checked with our colleague, [former Pentagon spokesman and Wyoming resident] Pete Williams, who I knew had checked on Dick Cheney's voter registration earlier in the week, and he said, 'As of Tuesday, Cheney was not registered to vote in Wyoming.' So he gave me the number of the Teton County clerk's office, so ... I call them up and I get very a nice woman by the name of Sharon Nethercutt, and I said, 'Is Richard Cheney registered to vote there?' And she says, 'Yes.' And I said 'When did he register?' And she said, 'Today.' And so what she said was that he walked in that morning, he filled out the card withdrawing his registration from Texas, moving it to Wyoming."

But this could also be a head-fake. The whole registration-change story hinges on the fact that last Friday was the deadline for Wyoming residents to register to vote -- but that deadline is only true for those who want to register to vote in the state's Aug. 22 primary, and not for the November election. According to Jim Mitchell, project administrator for the Secretary of State of Wyoming, Wyoming residents can register to vote for the general election on Election Day itself. If they want to vote by absentee ballot, they have until 30 days before the election.

Further, even with Cheney changing his voter registration, he still clearly "inhabits" his home in Dallas.

Thus, it's questionable how much of a deadline Friday was.

Still, it stepped on the McCain story -- which the Bushies clearly desired.

From the Bush campaign's perspective, McCain just wont stay out of the limelight. That's not entirely his doing; a Stanford poll from late June indicated that a Bush ticket with either McCain or Retired Joint Chiefs Chairman Gen. Colin Powell would beat any Gore ticket with around 60 percent of the vote. With the one exception of Elizabeth Dole, who also fared well in the poll, no other running mate brought Democrats and Independents into the fold. How could any veep nominee compete?

On Thursday, bearing such a result in mind, two Republican congressmen -- Reps. Lindsey Graham of South Carolina, one of the few Members of the House who endorsed McCain for president, and Tom Davis of Virginia, head of the National Republican Congressional Committee -- circulated a petition to be sent to the Bush campaign, pushing for McCain to be on the ticket.

How did that all get started? On Tuesday, Pennsylvania Gov. Tom Ridge told Graham that McCain had seemed amenable to the idea in a recent conversation -- and Graham ran with it. Additionally, on Wednesday, in his semi-regular meeting with Davis on which House candidates McCain should campaign for, McCain mentioned that Powell, Elizabeth Dole, and he did well in the Stanford poll. Thus Davis, too, encouraged the re-entry of his name into the hat.

Regardless, worried about narrowing polls, 60 Republican Congressmen signed the letter, pushing for McCain, and Graham faxed it to Bush HQ. According to one Republican source, however, almost 90 GOP Members had actually signed the petition, until Reps. Chris Cox, R-Calif., and John Kasich, R-Ohio -- at the behest of the Bush campaign -- had some Members remove their names.

Bush and his team were reportedly displeased with the letter.

"It didn't help the team," one Republican official says, adding that the Bush campaign is reportedly not returning phone calls from the NRCC. Soon enough -- surprise surprise -- Cheney's bubble popped up on the media surface.

Intentionally or not, in dragging out the speculative process, playing the press corps like so many un-TILT-able pinball machines, the Bushies have achieved a barrage of almost uniformly positive stories that accomplish a great deal image-wise, associating Bush with various Serious and Important Men. Gore campaign officials, meanwhile, sniped that the Bush campaign has demeaned a serious process. "It's almost like carnival atmosphere," Gore spokesman Chris Lehane said of the Bush veepstakes. "It all covers up the fact that their campaign has been floundering in terms of any message. For four weeks now the only positive press that they have generated has been about their vice presidential selection process."

As I sit in my Austin hotel writing this very sentence at noon on Monday, CNN's Wolf Blitzer has just cut to Jonathan Karl who's repeating some of the reasons why the chattering class continues to regard Cheney as da man. Namely, Monday's Washington Post reported that Cheney told board members of the Halliburton Co., where he's served as chairman and CEO since 1995, that "it was virtually certain" that he would be picked, according to one unnamed board member.

Understandably concerned about Cheney's three heart attacks, Bush had one of Cheney's doctors consult with a Houston cardiac surgeon and Bush family friend -- Dr. Denton Cooley -- who somehow felt no compunction in telling the New York Times all about those hush-hush consultations.

RING! My bureau chief is on the phone: Dan Rather on CBS Radio just reported that two sources "close in on the negotiations" told him that both Bush and his pop, former President George Bush, have been in contact with Colin Powell -- whom Cheney named to be Joint Chiefs chairman, incidentally -- about taking the job. Reportedly, Powell's wife Alma is no longer objecting to his being named to a national ticket, which you might recall was the main problem all along. (Regardless, Powell soon put out a statement announcing that he is still not interested.)

Another possibility seems to be Episcopal minister and former Missouri Sen. Jack Danforth, another Serious and Important Man who brought the world Clarence Thomas -- and who, ABC News reported, secretly met with Bush and Cheney last week. But Danforth went on "Fox News Sunday" and said he didn't want the job.

Or was that a head fake too? The Drudge Report insists that "Oklahoma Gov. Frank Keating has cleared his schedule and cancelled meetings set for Tuesday." A-hah!

Who knows? They're all possibilities, though Bush has promised fellow Republicans that when he names his running mate "your eyes will light up with excitement" -- do any of these guys achieve such lighting? As of Sunday night he had not made up his mind, according to spokeswoman Mindy Tucker. So are all these stories just hardworking reporters earning their keep? Or is someone at Bush HQ doing some whispering? Why would a Bush family physician talk to any reporter about a private medical consultation unless he'd been told it was OK, as a way of either further head-faking, or perhaps to get the Cheney-heart-problem story out and over?

Such a media strategy -- if, in fact, one exists -- has successfully earned news stories about nothing much concrete, really, since nothing will actually be decided until it's actually decided. (Which will be, again, who knows? Maybe Tuesday, they say.)

But, more concretely, they certainly have inflated Bush's public persona, enhancing the "gravitas" -- to steal the clichi of the moment -- of the man who has been known to flash reporters a mouth full of semi-chewed Chee-tos.

And, in addition to projecting image after image of Bush standing handsomely alongside various Serious and Important Men in your living room, the stories have replaced those about Vice President Al Gore's only remotely successful salvo against Bush as of late, that of Bush's mixed record as governor of the Lone Star State -- a record that has much for Bush to laud and also much for Gore to deride.

All of this despite the fact that all of these stories will all be made irrelevant soon.

"I don't know who's steering" the press coverage, says a Republican official. "Somebody's doing it. I don't remember it being quite this weird" in the past.

Whatever. I'm going to order room service. I'll get back to you when I have something to report.