The deadly price of luxury

The Concorde's fatal crash over Paris could mark the end of supersonic travel. 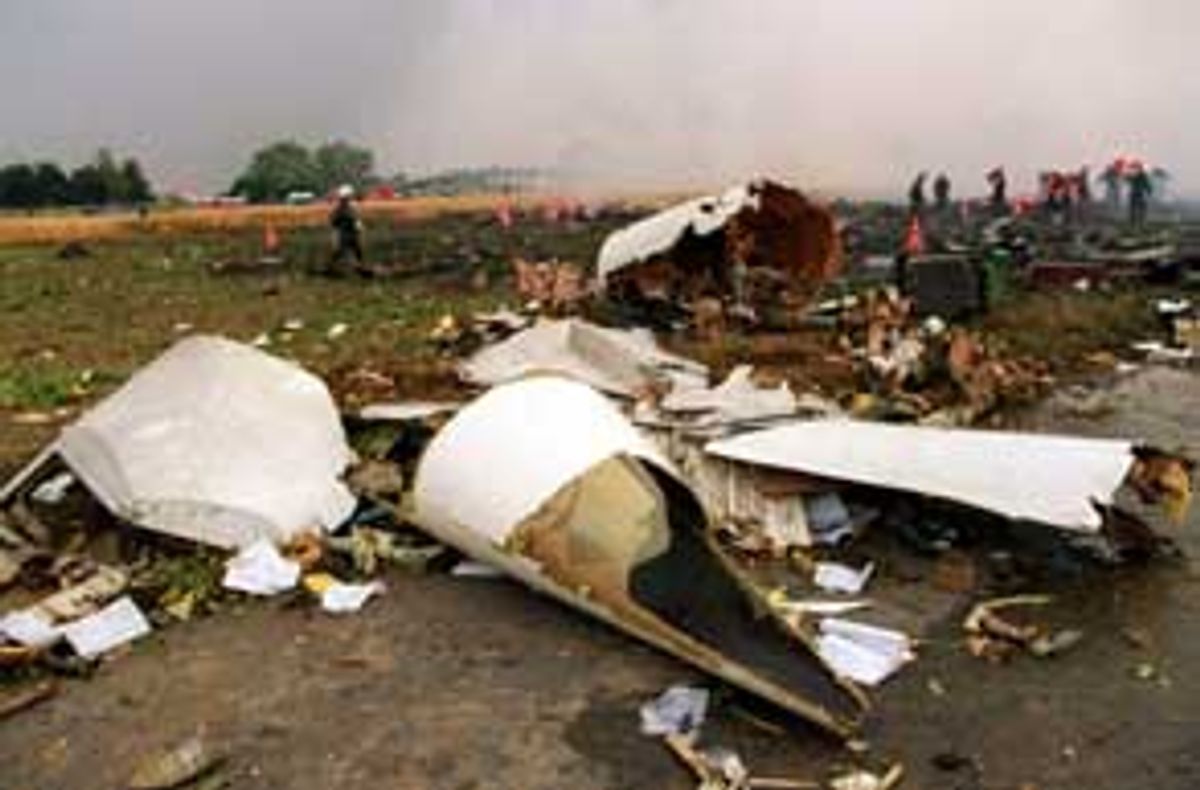 Beyond the tragic loss of life -- 100 German passengers dead en route to their vacation, plus nine crewmembers and four people on the ground -- Tuesday's horrific Air France disaster may forever destroy the cachet once held by the world's fastest passenger plane.

Flying the Concorde used to represent the epitome of luxury. Its passengers were willing to pay a ridiculously high price to sip champagne beside fellow jet-setters while whisking across the Atlantic. Now, those sleek (if rapidly aging) planes seem more dangerous than decadent.

As a result of the Paris crash, France's transport minister has called for the grounding of Air France's five remaining Concordes. British Airways, which owns the other seven Concordes, canceled its two remaining Concorde flights Tuesday evening. Has the Concorde's three-decade run as the hot rod of the skies come to an end?

"The Concorde may now be dead as a commercial product," says Joe Brancatelli, columnist for biztravel.com, a Web site that covers the airline industry. "It's a 30-year-old plane that's mostly been eye candy; it's the aviation equivalent of a gull-wing Mercedes. But this crash could make it commercially unviable to continue flying."

Deluxe travel operator Intrav hasn't canceled its around-the-world chartered Concorde trips this fall, which cost $62,000 per person. But spokesperson Liz McQuinn says the St. Louis company has lots of questions to ask Air France. "We're going to do whatever we need to do for our customers. We wouldn't do anything knowingly to put our passengers in jeopardy."

Both Air France and British Airways -- the only airlines to fly Concordes -- claim they make a profit from their supersonic services. After all, plenty of business and leisure travelers are still willing to shell out $9,000 for the speedy trip from New York to Paris on an aircraft where pampering knows no limits.

But unless the airlines pay a considerable sum to restore their Concordes for the long term, the fleet could be grounded within the decade. Air France officials have said in the past that their fleet is fit to fly until 2007. But now, with the jets under intense scrutiny, the deadline could come much sooner. Although French authorities will lead the investigation into today's crash, the U.S. National Transportation Safety Board announced that a U.S. investigator would take part in the probe as an observer because the Concorde regularly serves the United States. (In a weird twist of fate, British Airways grounded one of the jets on Monday; the cracks in its wings had grown too large. Air France also said it discovered cracks in the wings of four of its six Concordes.)

To be fair, this was the Concorde's first fatal crash since its debut in 1969 -- a stellar record by airline standards. But after a glimpse of Tuesday's shocking crash-scene images, travelers may rethink those extra few hours in a regular first-class cabin.

Despite its lofty price, consumers have always had a fascination with the plane that uses Rolls Royce engines. Since the Concorde's debut, it has attracted executives, rock stars and rich voyeurs who marveled that they could travel from Europe to New York in three hours, at a speed of Mach 2 (1,370 miles per hour).

The airlines certainly took full advantage of the jet's near-mystical lure. Earlier this spring, Air France made a splash when it transported Victoria's Secret supermodels to the French Riviera for the Cannes International Film Festival. In a press release, the airline revealed that champagne and caviar was served on the flight, and that part of the plane itself was painted pink, displaying the lingerie company's logo.

"This is a highly visible, sexy airplane, where you're treated like a demigod," Brancatelli says, adding that British Airways considers the Concorde its "jewel in the crown." "Who can deny the power of telling your business associate that you'll be on the next Concorde?"

Still, Brancatelli believes the Concorde is not commercially viable as a long-term business. For one thing, he says, the routes are limited. For instance, the aircraft can't fly from New York to Los Angeles for environmental reasons, which strands important West Coast passengers.

The Concorde is also prohibitively expensive to maintain. (Ask any Rolls Royce owner how much it costs to change the hubcaps.) The airlines could very well decide it's not worth their investment to keep the jets in the air. They may have to make a decision soon, now that the safety of the Concorde is of concern.

In some respects, it's amazing the airlines haven't done something sooner. Lovers of the Concord's unique brand of luxury may be amazed to discover that they may have been flying occasionally on a broken heap.

The Civil Aviation Authority in London logged 130 incidents associated with the Concorde between August 1998 and July 1999, according to that city's Independent newspaper. The only major scare involving a Concorde came in 1979, when a bad landing blew out a plane's tires. The incident led to a design modification. The other incidents ranged from repeated warnings of smoke in the air conditioners to problems with hydraulics and engines. In October 1998, nearly half of the lower rudder of one plane fell into the Atlantic. In late January, a British Airways Concorde made an emergency landing after an engine failed seven miles from its London destination. The next day, all four engines on another Concorde were found to be faulty.

Although every commercial aircraft generates "incidents," some believe there have long been warning signs that the jets may be deteriorating faster than the airlines are admitting.

The Concorde's history has been cloaked in turbulence since it first took off in 1969. It was jointly manufactured by France's Aerospatiale and British Aerospace, but as costs mounted and environmental concerns were raised, both governments considered scrapping the project. Some estimate that the Concorde has cost British and French taxpayers about $34 billion.

Since governments no longer are willing to foot the bill of such pricey projects, no new Concordes are being built. The future lies in superjumbos such as the Airbus A3XX, which will carry more than 600 passengers. Despite the world's longtime fascination with the supersonic Concorde, its presence may come to a swift end.

Which will be no consolation to those German travelers.