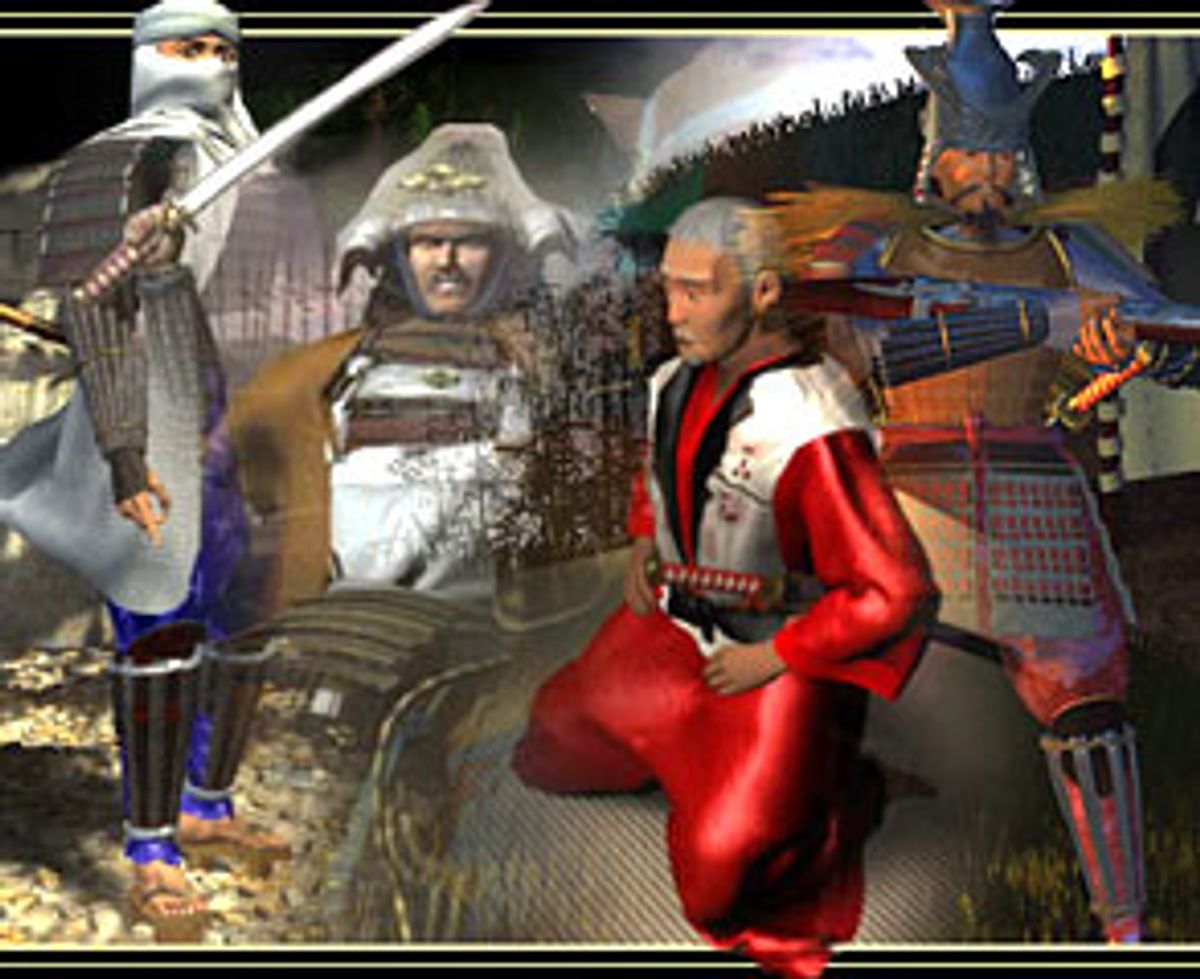 Now I know how Kambei Shimada felt when his battle plans went awry.

But unlike Shimada, the calm tactical genius from "The Seven Samurai," I'm not lucky enough to at least have Toshiro Mifune giggling and going uncontrollably hog wild on bandits with his 7-foot no-dachi sword. In my riverside battle from Shogun: Total War, the new strategy game from Electronic Arts, I'm stuck with a squad of unworthy samurai archers -- men with no honor.

The archers are supposed to hold a key bridge long enough for my main forces to cross another bridge, then swoop upon the enemy's right flank to devastating effect. Instead, the enemy's heavy cavalry are thundering down on my archers, fast -- but rather than holding, my archers are wheeling around and fleeing the bridge altogether. Clear of the bridge, they keep running, up the nearby foothills; presumably returning to their farms, or joining the ranks of ronin -- the masterless samurai.

If my grievous lack of face seems inordinately keen -- and it is -- it's because Shogun isn't a typical real-time strategy (RTS) war game, with touches of Japanese history merely sprinkled about for flavor. Shogun's designers have imbued every aspect of the game interface with the sensibility of ancient Japan, arguably the most aesthetically elegant in world history.

Information windows incorporate traditional wood prints of warfare. Even the strategic troop icons evoke the small, colorful cards from hana fuda, the Japanese gin rummy. On the battlefields, this realization of feudal Japan is breathtaking. As if the wood print master Hokusai himself were their visual advisor, the game's battles are evocatively staged, sometimes on lush, steep hillsides, sometimes in the midst of swirling fog or driving rain. Flurries of men in ornate armor clash, accompanied by a thunderous soundtrack of taiko drums, shakuhatchi flutes and Japanese battle chants. In some battles, the fields are arrayed with thousands of soldiers, all individuated and displayed within the same frame.

This unity of mise-en-schne contrasts starkly with most historically based RTS games, such as Microsoft's Age of Empires, in which the "history" mostly seems like costume and props; a kind of grade school diorama overlay imposed on a genre first created in Peter Molyneux's Powermonger, and then expanded in Sid Meier's Civilization and Blizzard's Warcraft.

What Mike Simpson and his development team have done is remodel an entire culturally unique era in the form of a computer strategy game -- and at the same time, re-conceive that genre as a fully cinematic experience. From a Westerner's perspective the effect is like being placed within the color-saturated world of Akira Kurosawa's "Ran." Or rather, in the role of a character who'd comfortably fit within that film. And while your daimyo (clan leader) doesn't endure King Lear-like domestic strife, his struggle to unite the nation is just as savage.

Shogun has some problems -- there are a few unsatisfying gameplay idiosyncrasies and seamless play requires a high-powered computer. But as an experience, Shogun succeeds as something much more ambitious than a compelling strategy game: It shows how a medium besides film can evoke the experience of war -- and the kind of artistry someone like Kurosawa brought to it. Who knows? For historically minded dramatists, games may even turn out to be a superior medium to film.

The prospect of strategy games supplanting their movie analogs couldn't come sooner, because it looks like the glory days of great war films are long past. Costs have grown too high and the production process has become too corporatized. The film industry shows little patience for the historical accuracy or conceptual breadth inherent in a computer game like Shogun. Perhaps aspiring filmmakers who'd attempt Kurosawan heights would do better to switch mediums now.

In Shogun, you take the role of Kurosawa himself, moving over the battlefields with a distanced perspective that distinctly evokes his serene, cinematic gaze. (You can even toggle the in-game voices to be Japanese-only, with English subtitles, and choose a letter-box, widescreen display -- computer game as Criterion Collection DVD.) The upcoming theatrical re-release of "Ran" makes the comparison between the two mediums even more inviting.

One could argue that Shogun actually compares well with two of Kurosawa's best historical films. It captures the sense of lucid strategizing from "The Seven Samurai," where we're able to follow the logic of Kambei's every field tactic -- only here, you're in charge of that strategy. At the same time, the game also has the dreamlike quality of "Ran's" chaotic battle scenes -- only this time, you're not a passive witness to them, but a fully active participant.

None of this is to say the game only works as an interactive version of a Kurosawa movie. As a strategy game, it also features some fairly impressive innovations.

Shogun employs the resource-management aspects of games like Warcraft and Starcraft, in which building castles and training facilities are crucial to victory. (Which, unfortunately, tends to reduce the genre's tactics to effective industrial policy.) Cunningly, Shogun separates the resource-management element, making it a discrete, turn-based component, while confining the real-time action to the battlefield.

Construction needs extend way beyond building armories and barracks, too: erecting a geisha house, for example, enables you to train kimono-wearing master assassins; constructing a temple allows you to recruit fanatical Buddhist warriors. It's startling to have a culture's basic facets defined strictly according to their strategic utility in wartime. (Then again, perhaps that's also the truest way to perceive them.)

The artificial intelligence for your soldiers and their enemies is similarly ambitious, with each individual on the field an autonomous agent. Commit a successful maneuver, and your opponents will retreat to a hill and regroup. You can see them there on the horizon reorganizing and hear them shouting commands, their armor clanking and horses snorting. The effect is eerie.

And befitting its setting, the honor ranking of commanding generals (determined by previous victories/losses) is of preeminent value: Even with the strategic advantage, the soldiers under a disreputable general bereft of face will scatter at the first sign of resistance -- while the vastly outnumbered samurai of a legendary daimyo will bravely stand and fight to the last man.

To be sure, Shogun is not without faults. The resource-management strategic map, while elegant and intuitive, can also be annoyingly arbitrary. With only a handful of unclaimed provinces keeping me from victory, for instance, I was casually informed that my daimyo had died of old age, and left heirless; with that, the game abruptly ended. Without an interface to increase my stable of concubines, let alone my attempted copulation rate, that hardly seemed fair.

The groundbreaking combat interface is not flawless, either: while the visuals are admirably detailed, it brooks little player mobility outside its reference frame. You're unable to jump to places very far outside your current viewing frame. So when reinforcements arrive, for example, you need to squint and poke about for them somewhere behind hills and forests way off in the distance.

Above all, one wishes the design also accommodated Kurosawa's renowned sense of shifting perspective from "Ran," where the viewer first watches the battle from a godlike, abstracted distance -- only to suddenly plunge straight into its center, amid the screaming and the horrific gore.

But even without that sense of contrast, which would truly put Shogun into the realm of the profound, the game offers enough to demonstrate how far the medium of PC gaming has come. The best games are now powerful enough to compete on ground previously occupied only by film.

Perhaps it will require a Kurosawa of game designers to fully expand on the potential suggested here. For now, though, it's enough that it convincingly transforms you into an ambitious daimyo, seeking the title of Shogun. And to feel the thrill of uniting a heartbreakingly beautiful island against the treachery of neighbors and would-be exploiters from abroad.

At the moment, though, I've only a few provinces remaining on the southern tip of the island, and a rival daimyo is marshaling massive forces at my borders. So I'm tempted by the Portuguese trader who marches into my palace, offering to sell me muskets from the barbarian West -- but only if I'll first convert to Christianity.

Firearms would drive my foe's armies from my provinces in clouds of gunsmoke, true. But it would also mean an alliance with this arrogant foreigner, with his patronizing half-bows and his odd religion. To decline is suicide, but to accept is even worse.

So I refuse, and the uncouth gaijin stomps out. Asked for his counsel, my nearby advisor bows. "A true warrior prefers to die with honor, rather than live with shame," he observes with sage approval.

His compliment turns out to be a Delphic backhand, though. Within a few turns, I'm face up on a funeral pyre, honorably roasting like a charcoal briquette. In this realm, at least, dying with honor only means a longer reload time.