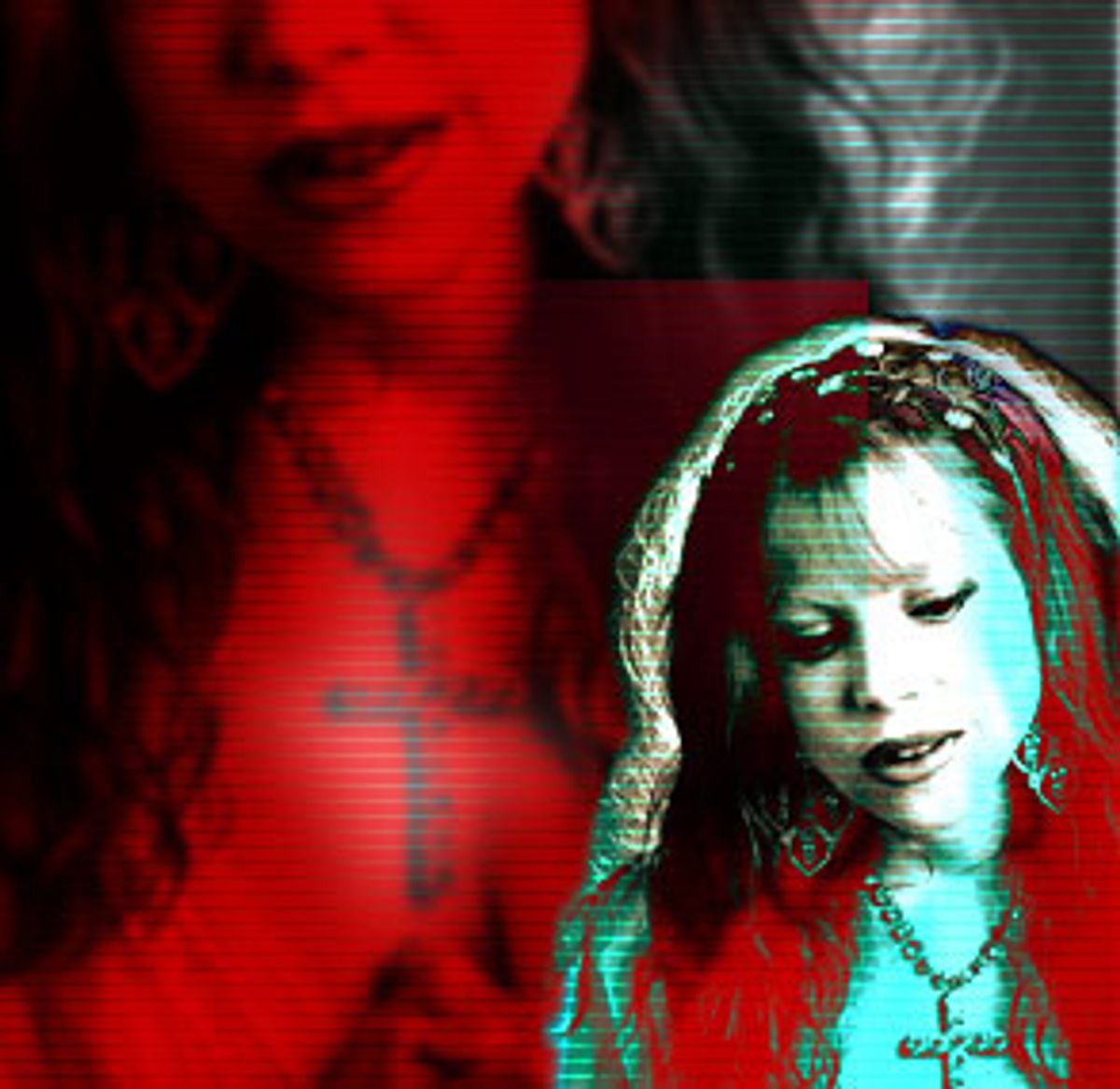 Like a true queen of country, Tammy Faye Starlite fairly floats down the aisle on her way to the stage. Clutching the train of her white wedding dress in one hand, she seems propelled by the sinuous strains of a pedal steel guitar. Her regal posture and virginal gown recall the stage shows of Loretta Lynn, one of Tammy's musical idols and inspirations.

The choreographed entrance is as much a part of country lore as the waltz, the shuffle or the two-step. But this night, in a small downstairs lounge of New York's Knitting Factory, the slender woman wearing bleached-blond tresses and too much body glitter has anything but sycophantic fantasies in mind. Tammy Faye Starlite has come to skewer country music, to kill the thing she loves, to take all those ballads of pious, overworked women with too many babies and drunken philandering husbands and twist them into sometimes-pornographic satire.

Tammy Faye Starlite -- named for the television evangelist's wife, Tammy Faye Bakker -- is a nasty girl. In the course of the evening she will peel off her elbow gloves and strip to a chemise so skimpy it brings a blush to her own husband's cheeks. But by that time the faint of heart will have fled. Propriety seldom survives into the second verse of a Starlite song. Her lyrics begin with characters found in all country songs: simple men or women on a bad drunk, in a bad marriage or strung out on divorce or unrequited love. But family values soon turn to incest and the love of God gets downright carnal. Her band, the Angels of Mercy, lay down the sure rhythms and artful guitar fills that country fans love. But anyone who takes the genre too seriously is certain to be burned.

Tammy Faye Starlite is the creation of Tammy Lang, a 33-year-old Jewish actress with a long list of soap opera credits, a creative writing degree from NYU, 12 years of yeshiva schooling and a lifelong obsession with country ballads.

In 1994 she and her husband, James Oakes (Jimmy Jay to her fans), began developing the Tammy Faye character for an off-off-Broadway play, "Father Sullivan and the Country Singer," in which Tammy Faye meets Oakes' drunken gay Irish priest at St. Patsy's Cathedral (as in Patsy Cline). At the time, Lang was reacting to the rise of the new right -- the ascendance of Newt Gingrich in Washington, the Oklahoma City bombing and the publication of the "Turner Diaries." Raised in a left-wing family on the Upper West Side (her mother attended the Knitting Factory show), she turned to songs about white supremacy and race hatred. She decided to "combat evil by embodying it."

Tammy Faye Starlite has since evolved from a political character into a straight country satirist, a stage presence into an act that has played smaller clubs around New York. Eventually she put together the Angels of Mercy and cut the CD "On My Knees." The title refers to more than reverence; in "If You're Comin' Down Sweet Jesus," Starlite proclaims her readiness to receive the Lord. As she departs from the politically outrageous numbers of the early years, she sticks with the stock characters sung by the great women of country music, a source of inspiration that may never dry up.

"I guess the country music female singer is just fun to play," Tammy says. "I do love to act, and the Loretta Lynn, Tammy Wynette and Patsy Cline template is just so rich. They're like Shakespearean protagonists -- valiant, gifted and larger-than-life, but cursed with a tragic flaw that brings them to the depths of despair and degradation and drugs and debauchery -- all that juicy stuff. It's like getting to play Blanche DuBois from 'A Streetcar Named Desire.'"

Starlite draws much from Lynn, the "coal miner's daughter" and onetime belle of Nashville. In 1971, Lynn had a hit with Shel Silverstein's comic song "One's on the Way," a cutesy number about a harried Topeka, Kan., housewife who doesn't have time for celebrity news. How could she care about the luxurious lives of Liz Taylor and Raquel Welch? Her kids are crying and she's got yet another child on the way. Starlite sets her response to the song during 1970s feminism. She is, she says in the introduction, the third of 16 children. Her mother had all of the kids between the ages of 15 and 25. She always had "one on her and one in her." Corrupted by "that little Jewish dwarf, Andrea Dworkin," the third daughter suggests that Mom have an abortion. Mama sets her daughter straight with the anti-abortion anthem: "God Has Lodged a Tenant in My Uterus."

Incest is another favorite theme: Lang loves country star and songwriter Holly Dunn's song, "Daddy's Hands," but she couldn't resist adding a verse about daddy sneaking into the bedroom at night. She wrote "Moonshiner's Child," another incest song, and introduces it as her answer to "Coal Miner's Daughter." Least likely of all to get radio play is her take on Deana Carter's 1996 hit, "Did I Shave My Legs for This?" Tammy says she "just kind of stole the title" and asked her guitar player, Mark McCarran, to write a new melody for her original lyrics. The result is another type of ballad: "Did I Shave My Vagina for This?"

"I did like [Carter's] song a lot," Lang said. "So, generally the stuff that I do comes from stuff that I actually like."

Not everyone appreciates Starlite's work. In Nashville, Tenn., for the first time several years ago, Starlite took her songs to one of Music City's most famous venues. "At the Bluebird Cafe, you know, the legendary Bluebird, I went up there on open mike with a guitar player and I did 'Moonshiner's Child,' my happy incest song." The club turned off her mike, but Starlite did not surrender the stage. "I did a song that I wrote called 'Ride the Cotton Pony,' uh, which is about going down on your girlfriend when she's menstruating."

"I also have an extreme love of shock," Starlite admits. "In the late '80s and early '90s, I just loved listening to Howard Stern. That was when he was really good. Now he's just all about titties. Everything he did was to antagonize. I knew that he wasn't a racist and I knew that he, you know, maybe he's a misogynist, but it was so funny. He'd say things and it was like that roller coaster, when you go down, you know. Wow, that's a cool feeling."

In that spirit, she sometimes does a song about Ricky Skaggs, a great guitarist and mandolin player whose wife caught him in bed with his male drummer. "My Friend Ricky" might never have been written if Skaggs were less "sanctimonious and Christian," as Starlite puts it -- or if Nashville were less homophobic. "He's a big old queen," she says. "In the song, I tell the story about Ricky and then I name all of them in Nashville, you know, who are closeted. I'm country music's Hedda Hopper."

Is there anything sacred? Anything that Starlite will not make fun of? "I'd like to say nothing," she says cautiously. In most cases, she will only cut a number if audience reactions are severely negative. For instance, she was dumped from a bill at NYU after she played "Angels Are Hard to Find" -- a racist song from "Father Sullivan" -- at the Fez, a downtown club in New York. (Lang is creating another character, Crystal Night -- as in Kristallnacht -- who will revisit her harshest songs. The character is married to a Klan member. Her theme song: "He's Lynching and I'm Lonely.") "I don't like to gratuitously use words like 'nigger' or 'faggot,'" says Starlite. "I'll say 'kike' because I'm a Jew. But I don't really want to be harsh to people who are not in power -- like people who are not white male Protestants."

Starlite is starting to receive better receptions in Nashville. She says that she has been recognized in record stores, and that at her shows some cowboys in the back yell for her to "play that uterus song again." Her shows have received good reviews from L.A. to New Orleans and even Nashville. Yet Starlite cannot resist antagonizing mainstream country culture. "I loved that dichotomy between, you know, the upstanding family-values Christians and then the drug-taking, philandering, wife-killing reality of it all."

How seriously does the country scene take Tammy Faye Starlite? One measure is the quality of musicians she attracts. Ken Coomer from Wilco was slated to play last month's tour of six Southern states, but had to drop out after the Nashville shows. His replacements were Jimmy Lester from the Straight Jackets and Will Rigby, a New Yorker who moved to Nashville to play with Steve Earle.

Tammy Lang does not live by country music alone. She is currently playing a gun moll in "Pooty Tang" a film written and directed by Louis C.K., who invented the main character for "The Chris Rock Show." She's also playing Mick Jagger in a Rolling Stones cover group called the Mike Hunt Band. The band plays smaller clubs around New York and usually plays an entire Stones album in the round. (They're booked to play "Get Your Ya-Ya's Out" at the Lakeside Lounge this Saturday.) Last week their version of "Let It Bleed" dumbfounded an audience at Maxwell's in Hoboken, N.J., who had come to see Spacehog, the night's headliner.

"I just get up there and assume that I am Mick Jagger," Lang says. And, not surprisingly her Jagger is, well, shocking. She introduces the band by name, famous sexual peccadilloes, drug overdoses and criminal prosecutions. On stage she strips to bra and panties during "Monkey Man" ("I love this song. It shows what a buffoon I am.") and taunts her audience with sexual gestures and come-ons.

Tammy Lang as Tammy Faye Starlite, Mick Jagger and Crystal Night. Will there come a time when Lang sings her own songs? Until creative difference split them up, Tammy and Kramer (of Shockabilly and Shimmy Disc fame) had a joint project in 1997 and 1998. "Our band was Glen or Glenda and I did love those songs," she says. "We had some great shows, and I got to just sing, which was kind of a nice respite."