An excerpt from "Exhibitions: Tales of Sex in the City" 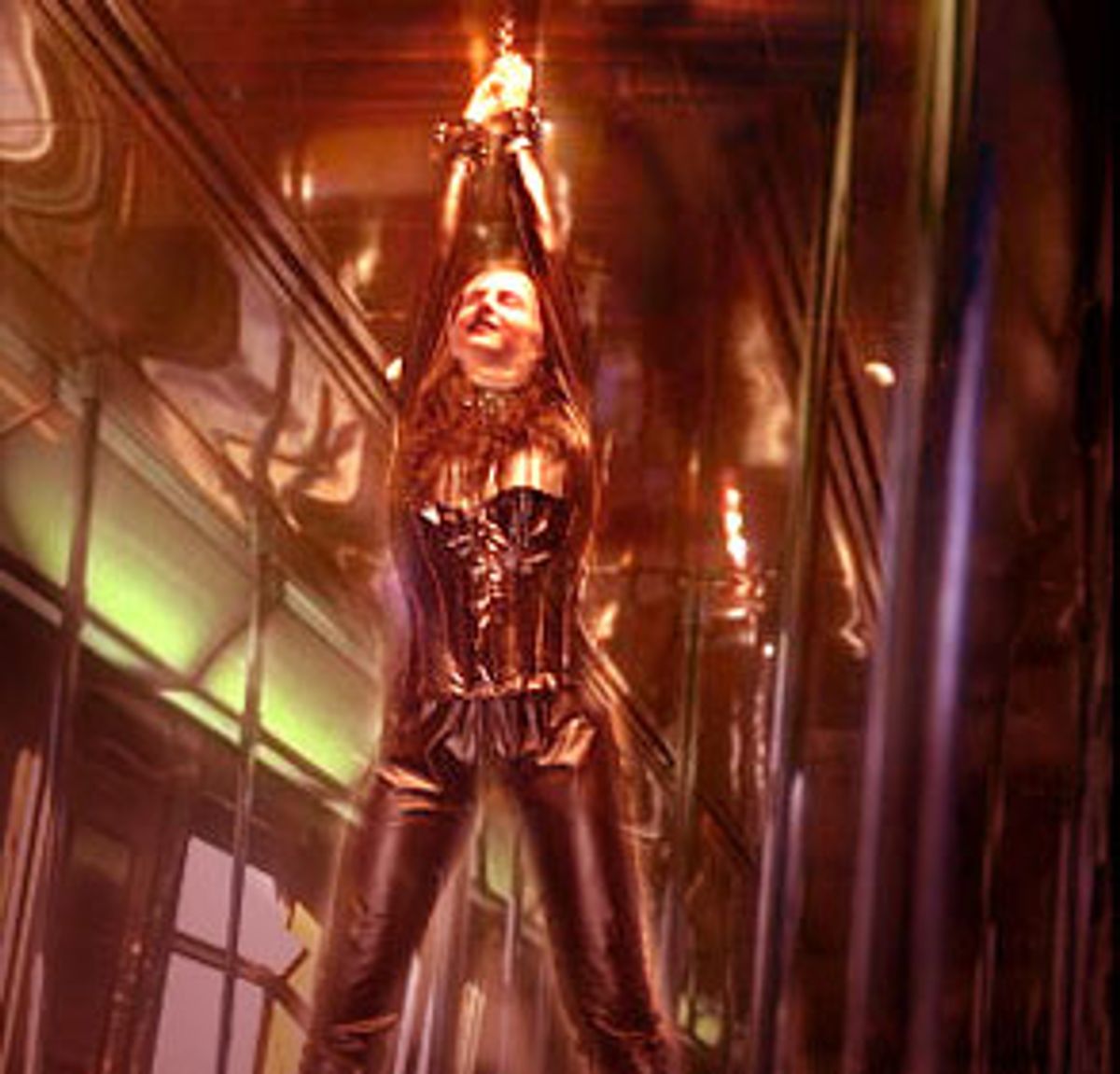 Well, I'd say we were drunk except that neither of us drinks, but we'd drunk enough lattes to send us into the next galaxy. My skin was tingling, and Joe kept picking up my hand and dropping it, each time dragging a finger across my palm.

He was young and tattooed and shaved and pierced, and I was about ten years older. "Vanilla skin," he called me. But he wouldn't tell me his last name, or what he did, so I told him, no way would I take him home with me. I was that kind of girl, but I wasn't that kind of girl.

"So let me ride the train home with you, at least," he said. "Let me make you feel safe."

I didn't feel safe around him. He had pale skin and deep blue eyes, and the slightest hint of a brogue. The tattoos were mostly Celtic designs, and his pale scalp stubble hinted that when it grew, he had dark air. Black Irish, I thought.

It was 2 a.m. on a Sunday night, and we boarded the train at Broadway-Lafayette. Both dressed for city combat: white t-shirts, black jeans, heavy boots.

And we entered an empty car, empty but for the trash blowing around.

And as we approached a seat, he said, "So you won't fuck me at your place, Nell?"

"Not without further particulars," I replied.

At this point we were kissing and sucking each other's fingers, sticky with the coffee we'd downed. We'd both been bad drinkers once, but now coffee and sex were the drugs of choice.

"Not in your house," he said again, and grabbed my shoulders from behind, licked my neck. I would have told him anything right then, but then he quickly slid his hands down my arms and grabbed my wrists. He pulled my arms overhead, and kept both wrists trapped in one meaty hand.

With the other, he pulled out a set of handcuffs. They jangled so loud. Just at that point, the doors flew open. Last stop in Manhattan.

"You can get off now, if you'd like," Joe said, and loosened the pressure on my hands just a bit.

But I shook my head. Let's see where this goes, I thought.

"You could take me home to your bed," he hissed, and shook the handcuffs.

"No," I said, and Joe flipped open the cuffs and slammed them on my wrists, carefully suspending me from the overhead pole. I was still facing away from him, but I could see everything he was doing in the smudged subway window. My feet barely touched the floor.

We were underground, in a tunnel beneath the East River.

Then he yanked my shirt up and exposed my bra, shoving a hand into the soft, sweaty cotton. He came around so he was facing me and pulled my breast to his mouth. The cuffs hurt my wrists, but they seemed to build the sensation in my nipple. I was moaning. Joe was silent. His tongue was long and pink, and I could smell smoke on his skin. He lapped at my breast like a baby. His jeans bulged. I tried to move closer, get more of his mouth on my tit, but he backed away. And again, he moved behind me.

First stop in Brooklyn, York Street, the ghost town stop. Still, I looked over my shoulder to see if anyone was entering. For a moment, I had a flash that Joe would make whoever entered the car join our handcuff party. I felt ashamed. And very hot.

"I get off in six stops," I said, suddenly angry.

Joe unbuttoned my jeans and yanked them to the floor, where they lay in a heap around my feet. I felt doubly trapped, a cloth bond around my legs, a metal one around my wrists. I was still wearing underwear, stupid white cotton briefs, because while I always wanted sex, I never believed I'd get it on the first date.

"Practical panties," Joe said, and ground himself into my back. I could feel his erection looking for a place to rest, and as he slid around my ass, it fit perfectly in my ass crack. I could hear Joe unzip and in the window I saw his cock rise in the air, bobbing. Sweat dripped off his face and onto my back. I heard him reach in a back pocket, and that familiar metallic sound, ripping, stretching.

"Next time," he growled, as he rolled it over his cock, "you'll put it on with your mouth."

"What makes you think there'll be a next time?" I snapped. Then he spanked me once, and I moaned.

"Don't pretend with me, Nell."

And then he stuck his hand in my panties and ripped them off. They fell in a heap, too. And before I could object, he had one hand dithering my clit, the other stroking my ass crack.

"You really have to get home?" he murmured into my hair.

"All right," he sighed. Then he grabbed my breasts and plunged his cock deep into me.

Suddenly we were one with the train's rhythm, just as it rose above the ground, into the sparkling Brooklyn sky. His cock was the right size for me, and he kept hitting my G spot like he had a map. When I tried to back into him, he would hold me still.

As could anyone who was in the station. A few sleepy partiers gaped at the next stop, but they didn't get in. One man actually did a double take: a rarity in New York.

And all the while, the heat was rising in me, and Joe's cock was pulsing. His hands pinched my nipples, as if trying to pull the orgasm out of me.

"I feel so embarrassed," I said.

Now Joe was groaning, and he was very close. His hand drifted to my face, and I nipped his fingers with my mouth, drawing them in, sucking them, and he came closer. One and a half stops to my destination.

"You're my fuckdoll, and you'll do anything I tell you," said Joe. Tell me what you are."

"I'm your fuckdoll and I'll do anything you say."

"Say the words right, or I'll pull out and leave you in the train."

Words were just words, I thought. And I needed that orgasm. Still ...

Then he said it.

So he needed it, too.

"I'm your fuckdoll," I said slowly, and Joe pumped me with every word, and I was seconds from going over the edge. "And I'll do anything you tell me."

And then we came together, bent, standing, convulsing, seeing ourselves in the glass, panting, coming some more. As soon as we stopped quivering, Joe moved quickly to unchain me and zip himself up. My arms ached, my mouth was dry, and I could have done it the rest of the night.

Joe yanked my pants up and picked up my ripped panties from the floor.

"Joe needs Fuckdoll's number," he said in a sweet pleading voice, and so I wrote it, quickly, on the soiled and sweaty cotton. It didn't occur to me to do otherwise.

The doors of the subway train parted, and we kissed, Joe nipping my mouth, just a little.

He grabbed me by the shoulders and propelled me out of the train.

"You gave me what I wanted, now I'll give you what you really want," Joe said. I turned to face him.

"My last name's O'Riley," he smirked. Then the doors closed again. And he was gone.

Nell Carberry is a contributor to the collection "Exhibitions: Tales of Sex in the City" edited by Michele Davidson.