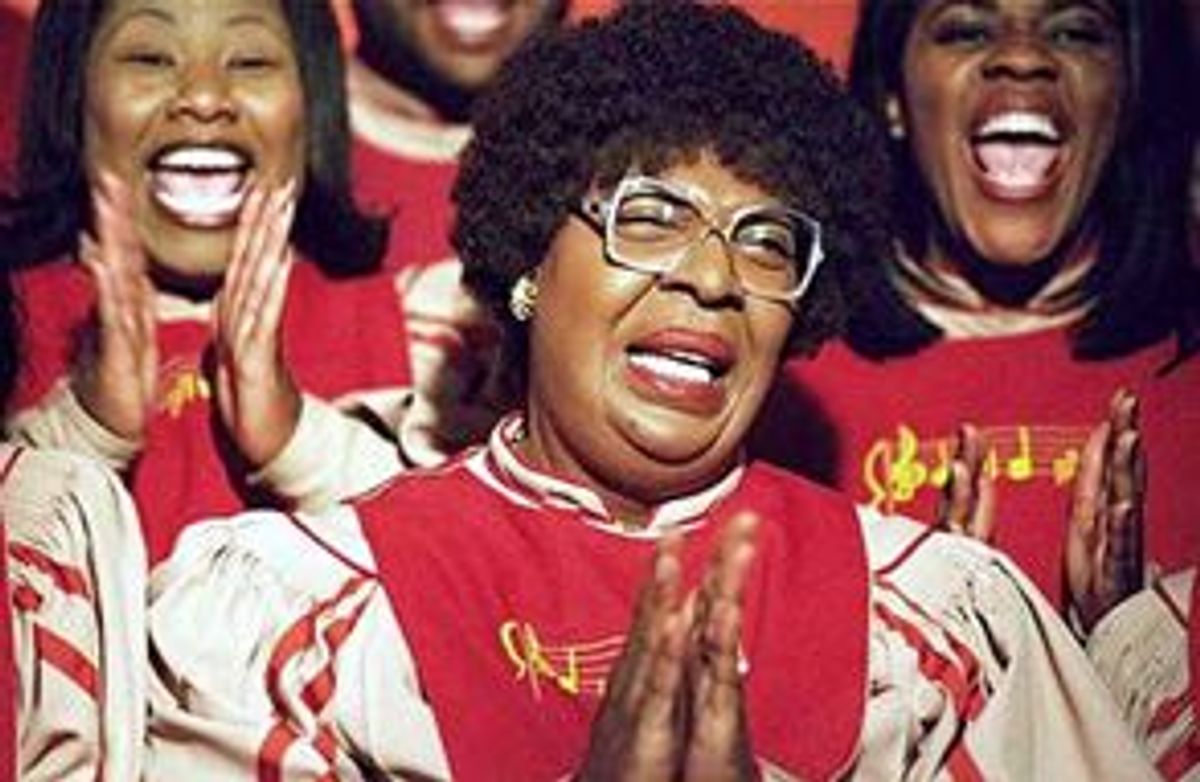 Put a black man in a dress and watch the grosses go through the roof.

That's what Universal Pictures is banking on this weekend as Eddie Murphy's "Nutty Professor II: The Klumps" opens nationwide. Impersonating six characters, Murphy doesn't just slip into a frock -- he straps on bras, girdles and droopy nylons. And that, the studio hopes, will ensure a $25 million to $30 million weekend gross and a shot at the $129 million domestic haul of Murphy's original "Nutty Professor."

White guys like John Travolta ("Battlefield Earth") and Robert De Niro ("The Adventures of Rocky and Bullwinkle") may be sinking this summer, but black talent is thriving.

The sleeper hit of the season is Dimension Films' "Scary Movie," a lecherous, R-rated deconstruction of its own "Scream" series that opened to a record-shattering $42 million; it may eventually gross $140 million or more. The film, which belongs to director Keenen Ivory Wayans, along with his screenwriter/actor brothers Shawn and Marlon, has become the biggest hit, by far, by any black director in history. The fact that it isn't a "black" movie per se -- the cast is integrated, but its gross-out humor is aimed at slasher-movie tropes, not racial issues -- makes it even more of a landmark achievement, albeit a low-rent one.

Earlier this summer, Martin Lawrence -- until now, the poor man's Eddie Murphy (they worked together in last year's prison comedy "Life") -- did a little cross-dressing of his own. The result, "Big Momma's House," was a surprise hit for 20th Century Fox. Fox expected Jim Carrey's "Me, Myself and Irene" to walk off with cash. Instead, the $51 million "Irene" looks as if it will stall at about $90 million while Lawrence's $30 million "Momma" coasts to a highly profitable $115 million.

For African-American Hollywood, 2000 is turning out to be a breakthrough year. When the box-office dust settles, Hollywood will be hard-pressed to continue consigning black performers and directors to what the industry euphemistically refers to as "urban moviegoers."

How bad was that ghetto? Before Wayans, only a handful of black directors had ever been allowed to helm major projects that didn't deal specifically with African-American themes. The most notable exceptions: Actor-turned-director Forest Whitaker, who scored a hit with '95's "Waiting to Exhale," was entrusted with the white-bread Sandra Bullock romance "Hope Floats" in '98; that same year, F. Gary Gray notched a modest success with the by-the-book thriller "The Negotiator," starring Kevin Spacey and Samuel L. Jackson. Now Wayans has leapfrogged over all of them, landing in a position to lay claim to any material -- or, at least, any broad comedy material -- he wants.

Blacks have been generating cash this summer in other genres as well: John Singleton has racked up a solid $68 million to date with his recycling of "Shaft." On those oversize IMAX screens, "Michael Jordan to the Max" has slam-dunked $8 million in just 80 days -- by contrast, "Siegfried & Roy" has collected only half as much after nearly a year on the IMAX circuit.

And replaying a symbiotic relationship as ingrained in American culture as Huck Finn and his rafting buddy Jim, almost every blockbuster success out there features at least one black supporting player as a sidekick: Ving Rhames guides Tom Cruise through his paces in "M:i-2." Though some critics made a fuss about Cruise's interracial romance with Thandie Newton, the movie itself treated it as a nonissue, and the movie's huge audience apparently agreed. Djimon Hounsou of "Armistad" protected Russell Crowe's flank in "Gladiator." And the crew of "The Perfect Storm" drafted a black sailor (Allen Payne), even if the producers couldn't figure what to do with him besides dump him in the drink.

All of which suggests that moviegoers, if not exactly colorblind, are a lot more inclusive than Hollywood generally gives them credit for. Sadly, when the studios turn out specifically black-themed movies -- and pitch them primarily to that "urban" audience -- they quickly hit a wall. This spring, the New Line romance "Love & Basketball" sputtered out after collecting just $27 million; and last year, Universal's buppie drama "The Best Man" stalled out at $34 million. If a movie appears to be about blacks, its appeal is limited; but if marketing forces can convince moviegoers that it's about something else -- like, say, funny cop goes undercover -- its black milieu doesn't necessarily get in the way of its finding a larger audience.

"The business is always worrying that if you do a black movie, it won't break out, but if you make something with mass appeal, it will," contends "Big Momma's House" co-producer David Higgins. When African-American screenwriter Darryl Quarles first pitched the project, he argued that the movie's gimmick wasn't drag, per se, but rather its setting in a matriarchal society in which big mommas rule. That apparently resonated with a seemingly unlikely demographic alliance. "In terms of our audience polling," explains Higgins, "we knew Martin had a strong following in the African-American community. But the next tier group that really responded to it were women from 45 to 60, regardless of race. And the added element that surprised us were pre-teenagers from 8 to 12. It became a bit more of a family movie than we originally expected."

Of course, one strong summer doesn't guarantee that black filmmakers couldn't find themselves consigned just as quickly back to their traditional ghetto. Murphy himself suffered through a cold streak in the early '90s, which didn't end until he stumbled into "The Nutty Professor" and then "Doctor Dolittle." And Hollywood appears in no rush to offer him more-serious roles (as it has for Carrey and Robin Williams), although his gift for mimicry suggests a broad range he has yet to fully tap.

Still, for now, the success of "Scary Movie" and "Big Momma" and the likely triumph of Eddie Murphy make for the sort of black movies Hollywood really likes -- those with grosses and nets squarely in the black.