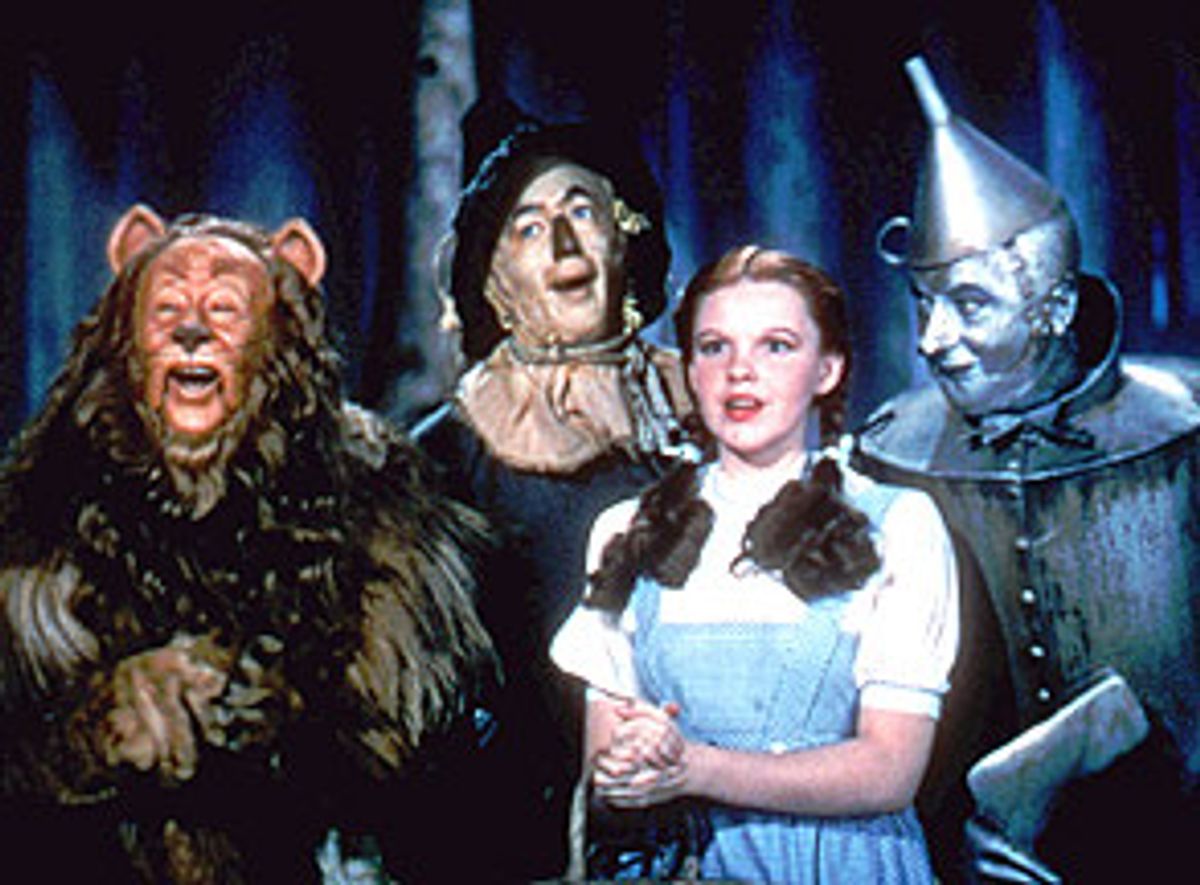 But Jerry Maren, the original Lollipop Kid, says that reports of the Munchkins' debauchery were greatly exaggerated. In fact, he recently told a roomful of fans, the misadventures of fewer than a dozen wild-and-crazy actors unfairly sullied the reputation of all 124 Munchkins. You'd have learned all kinds of things like that if you'd attended the International Wizard of Oz Club's special centennial celebration at Indiana University in Bloomington last weekend.

At the "Meet a Munchkin" panel, for example, Maren, now in his 80s and sporting a salt-and-pepper beard, noted that he and his fellow little people on the set made $50 a week (less than half of Toto's pay) during the making of the classic film. "How could you get drunk on $50 a week?" groused Maren, who presumably made more for his appearance much later in the "Yada Yada" episode of "Seinfeld."

And while we're at it: Despite a persistent urban legend, there is no dead Munchkin hanging from a tree in the forest where Dorothy, the Scarecrow and the Tin Woodsman first traipse off together. (Nor is there a dead stagehand, a despondent actor or, in the story's latest incarnation, a dead Munchkin wrapped in aluminum foil hanging from a tree.) "Can you imagine that happening with 124 midgets looking?" scoffed Maren, who wrapped up his remarks with a demonstration of how he hefted the oversize lollipop from his shoulder and handed it to Dorothy -- a reprise that earned him a standing ovation.

I'd come to Bloomington hoping to learn why L. Frank Baum's classic children's book still retains such a hold on the American imagination exactly 100 years after its publication. I also wanted to find out what had impelled nearly 400 fans from around the world to converge for four days of festivities that included the panel featuring four of the 11 remaining Munchkins.

Other events included a session examining Oz's unique attraction for gay men, lectures by Baum descendants, a Sunday morning Oz-themed Christian worship service led by a Methodist pastor and self-described minister of the "g-Oz-pel" and a multimedia presentation about a planned $860 million Oz theme park in (where else?) Kansas.

Luring participants from as far away as Tokyo, Tel Aviv and Moscow -- the "Oz" story is wildly popular in Russia -- the conference threw together an oddly eclectic mix of people, from pointy-headed academics to collectors hot on the trail of "Oz" memorabilia.

Scholars in attendance included Pulitzer Prize-winning novelist Alison Lurie, who lectured on "Oz and the New Woman" -- Baum's mother-in-law, it turns out, was noted suffragist Matilda Joslyn Gage -- and Michael Patrick Hearn, an authority on children's literature. Hearn noted that many serious writers have acknowledged the influence of "Oz" on their work, including Eudora Welty, Ray Bradbury, Robert Heinlein and Gore Vidal, who, when asked to name his three greatest literary influences, replied "Montaigne, Petronius and L. Frank Baum." Salman Rushdie has also acknowledged an intellectual debt to "Oz," even if he also once memorably characterized Toto as "that little yapping hairpiece of a creature, that meddlesome rug, that turbulent toupee."

At the other end of the spectrum were the "Ozzies" for whom true fandom means collecting tchotchkes and gewgaws and kitsch (oh my!). In fact, it was hard to turn around without running into "Oz" memorabilia or people scrambling to find more of it -- everything from "If I Only Had a Brain" T-shirts to 1940s Oz-themed peanut butter cans to a newly authorized pillbox featuring Dorothy and Toto. (A Judy Garland pillbox? Hello?)

"Almost everybody goes through the same thing," explained Richard Rutter, a California professor of orthodontics who has been collecting for 25 years. "The first thing you want to do is get all 40 books" in the "Oz" canon, which includes Baum's work as well faithful sequels by other authors. "Then you realize one of your books looks a little ragged around the edges, so you want a better copy," he told me. One thing leads to another, and before long, you're hooked.

Since Rutter had just wowed a crowd with a 320-slide presentation of his Scarecrow memorabilia, I figured he knew what he was talking about. In fact, he recently added an extra room to his home (complete with a yellow brick road, of course) to accommodate his 1,600 "Oz" books and magazine articles, in addition to plates, figurines, nutcrackers, glasses, ornaments and mugs.

In hopes of better understanding the addictive pull of "Oz" memorabilia, I slipped into one of the officially scheduled "Show and Tell" sessions, where devotees gathered to share their treasures. One man lovingly held up an elaborate domed Oz scene that his grandmother had sculpted from tiny bits of modeling clay. Oohs and ahs all around. "If there's ever a fire in my house, or a tornado, this is the first thing I'll grab," he said.

The next presenter stood up, then, with a flourish, whipped out a photocopy she'd made of the birth certificate of Margaret Hamilton, the movie's wicked witch. "I have more copies that I'm selling for a dollar!" she announced, then unloaded several right away.

A 13-year-old named Jimmy held up a can of Baum's Castorine he'd scored on eBay. The round red can, he told envious adults, contained a type of axle grease that Baum had invented and sold before he began writing books. (In fact, Baum's checkered career included stints as a traveling salesman, chicken breeder, baseball team manager and publisher of a magazine for window dressers.)

The next day I attended a multimedia presentation by Dan Mapes, chief technology officer of the Oz Entertainment Co., which is spearheading an effort to break ground later this year for a massive Oz theme park in Kansas. To be located on 9,000 acres outside Kansas City, it will be at least as ambitious and technologically state-of-the-art as Disneyland.

Visitors will enter via a "tornado ride," in which they'll buckle themselves into chairs in Auntie Em's farmhouse and then be tossed about while computer-generated cows and bicycles go flying by. After "landing" with a thud, they'll open the front door to see a faithful replica of Munchkinland, and follow the proverbial road through cornfields, forests and poppies to reach the Emerald City.

"If you're an Oz fan, this is going to be the Vatican," gushed Mapes before he showed off an animated fly-through of the park. (I later discovered that the project has faced organized resistance from a Kansas citizens group called Taxpayers Opposed To Oz, or TOTO, but I digress.)

After Mapes' whiz-bang presentation, an enthusiastic woman piped up with the question apparently on everybody's mind: "Is there going to be a gift shop?" I also dropped by the session called "The Appeal of 'Oz' for Gay Men." According to presenter Dee Michel, this was apparently something of a milestone: the first time the G-word had appeared in the national club's official program.

Michel, a consultant who has taught library cataloging at the University of Wisconsin, said that although it's rarely discussed openly, he surmises that gay men make up considerably more than 10 percent of the club's membership.

In fact, this session's standing-room-only crowd included a large lavender contingent, as well as others like the grandmotherly Ozzie from New Jersey who sat down next to me. "I want to understand what this whole gay thing is about," she said pleasantly. By the end of Michel's talk about gay role models in "Oz" -- the lion "born to be a sissy" and the tin woodsman ("not gay, but certainly not a macho man") -- she'd had several "Aha!" experiences.

Among other things, she heard that gay appropriation of such elements as rainbow iconography and "Friend of Dorothy" code phrases probably amounts to more than simple diva worship. As Michel observed, "Judy Garland made lots of movies, but nobody runs around naming bars after 'Meet Me in St. Louis.'"

Michel also suggested that the Land of Oz holds a special allure for those who are different because it is, as one writer put it, a place that's "fiercely tolerant of the outlandish" and a "community of eccentrics."

Indeed, one of the striking things about the Oz phenomenon is the very different people it brings together, whether out of a shared love for the books, the movie or both. "Oz is too universal to belong to any one group," John Fricke, author of "100 Years of Oz," told me. "You can say 'Scarlett O'Hara' or 'Rosebud' to anybody under 30, and they won't know what you're talking about. Show a picture of Madonna to most people over 50, and they won't know who she is. But show a picture of Dorothy to anybody over 18 months, and you've immediately started a conversation."

Kenneth Reckford, a longtime classics professor at the University of North Carolina, had taken time out from translating Greek to attend the convention with his grown daughter and present a talk on images of children and childish adults in "Oz." Although he usually lectures on the likes of Aristophanes, here he clearly relished talking about Flutterbudgets, Jack Pumpkinhead and Tik-Tok. Afterward, he too remarked on the way that the "spiritual citizens of Oz" constitute such a disparate collection of people.

"They're all over the country, conservative and liberal, 'respectable' and hippie, straight and gay. There's a tremendous variety of people in the club, people who wouldn't normally be friends but who are all brought together by the love of this wonderful place."

It would be tempting to try to pick out the looniest tunes here, to look for those who tend to obsess, Trekkie-like, over the finer points of Ozian cartography or the relative merits of Winkies and Quadlings. But the truth is that I really didn't run into much of that. Mostly I kept running into lovers of literature, teachers, librarians, editors, husbands good-naturedly going along with a wife's passion for the "Oz" books, wives gamely indulging a husband's collecting, parents eager to introduce their children to books they'd loved as kids themselves and boomers happy to be sharing the festivities with an aging parent.

(One such pair was Tulsa, Okla., travel agent Susan Hall and her 75-year-old mother, Shirley, who won this year's costume contest for her portrayal of a Scalawagon, a kind of self-driving Oz taxi. This involved slicing out the bottom of a purple and orange play tent, then fitting it over Shirley's wheelchair in a way that let her slowly tool around the ballroom while wearing a plastic bowl on her head. "I run on Flabbergas," the white-haired woman kept explaining to bystanders.)

In a summer when millions of Americans are zoning out in front of reality shows to watch "When Bad Things Happen to Boring People," there's something undeniably sweet about a gathering devoted to this homegrown American fairy tale that extols the virtues of, in Reckford's words, "gentleness, humor, kindness and justice."

Not only that, there's a refreshing lack of self-consciousness about the way that, as Fricke put it, "'Oz' fans aren't afraid to wear their hearts on their sleeves."

And there is something heartening about the fact that, for hundreds of such fans, those four days away from home only served to confirm that, hey, come to think of it, there's no place like Oz -- with the possible exception of an "Oz" convention.