"Girl on the Bridge"

A knife thrower, a beautiful assistant and a couple who just can't lose -- this lovely French film takes wing on giddy, reckless faith. 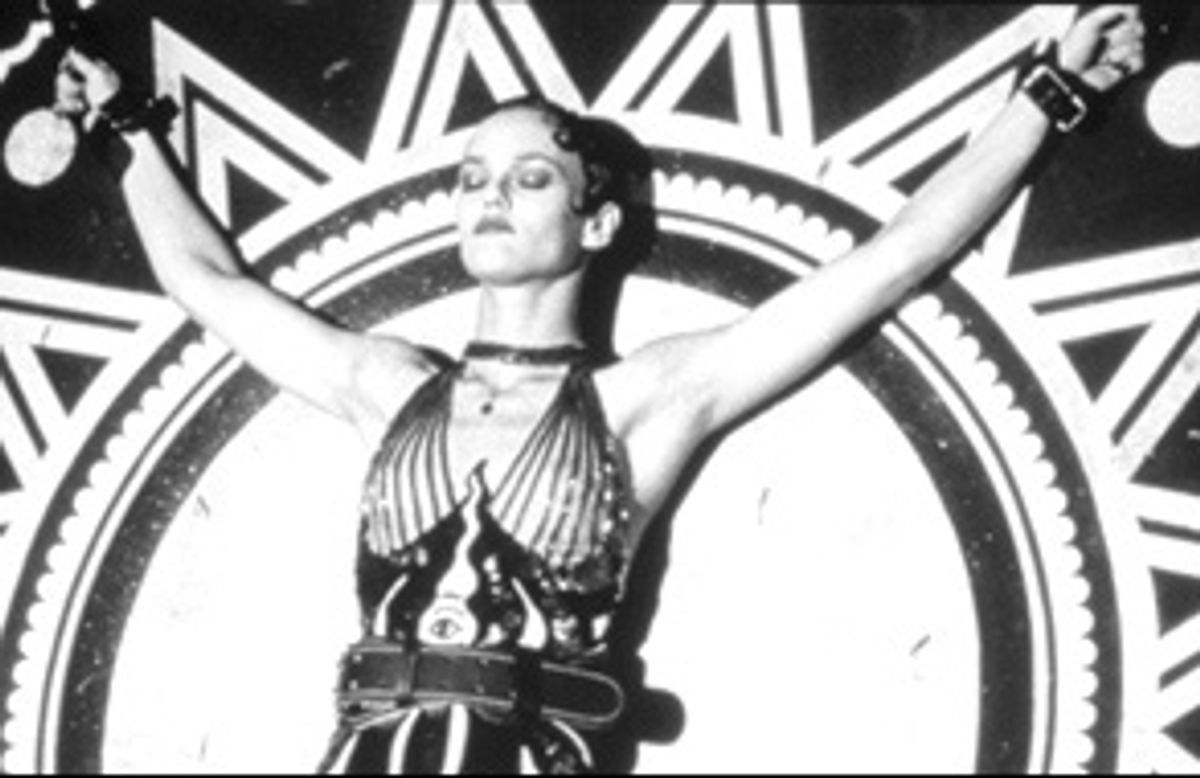 The French film "Girl on the Bridge" is a romantic daydream of a movie put together by a group of sharp, witty fantasists. Director Patrice Leconte ("Monsieur Hire," "Ridicule"), screenwriter Serge Frydman, cinematographer Jean-Marie Dreujou and stars Daniel Auteuil and Vanessa Paradis all work together to realize the sweetly silly joke at the heart of the picture: the way people in love want to live life as if it were a movie. Who hasn't surrendered to a first kiss, only to hear swelling music and imagine the smooch in a huge, screen-filling close-up?

Longing is often as funny as it is tragic, and "Girl on the Bridge" takes wing on the giddy, reckless faith that romantics give themselves over to. This is a movie that both jokes about and believes in the notion that there's a soul mate out there for each of us, and that once we find that person we can weather the pennies from heaven as well as the storms.

Auteuil plays Gabor, a professional knife thrower whose unshaven mug and rumpled pinstriped suit jacket reveal everything about his perilous state. One shave could make all the difference between his cleaning up into a success or his becoming an even more disheveled down-and-outer. One cold night he plucks Adele (Paradis) from the frigid waters beneath a Paris bridge and persuades her that if she's suicidal, she might as well become his assistant. Her problem is that she has been flitting from man to man. Convinced that each will turn out to be her Mr. Right, she goes off with one after another, to inevitable disappointment. She has lost faith that anything good will ever happen to her.

Despite his own lousy fortune, Gabor tells Adele that good luck is something you have to go out and make. What neither of them counts on is the mathematics of attraction in which two negatives add up to a positive. Together, their individual bad luck turns into unbeatable good luck as long as they remain a team. Life becomes a whirlwind of successful engagements and even more successful nights in the casinos, where Gabor and Adele can intuit winning roulette numbers. They're so in tune that they even speak to each other telepathically -- they're like the X-Men of love. When Gabor is unable to hail a cab, the pair simply purchases a raffle ticket and drives off in a new sports car. The stakes keep rising onstage (Gabor tosses knives at Adele while she's hidden behind a white curtain or spinning on what looks like a giant roulette wheel) and off (with their boodle increasing nightly at the casinos).

Had Leconte and Frydman taken this slip of a conceit seriously they might have wound up with one of those leaden disasters (like "One From the Heart" or Lios Carax's "The Lovers on the Bridge") in which whimsy strives to pass for profundity. By treating "Girl on the Bridge" as a confection, and depicting their hero and heroine (lovers in spirit if not in body) as addled dreamers, they allow us to indulge in the movie's lush-life romance without feeling foolish.

A tone of affectionate parody hovers over the film. This is a movie in which an abandoned woman (Catherine Lascault, who has a tangy mournfulness) pours out her heartbreak in the purple prose of romance novels, in which a man declares to a woman he has just met, "I'm about to faint with desire for you," in which lovers who meet on an ocean liner are so thunderstruck they set out to sea in a lifeboat. And when was the last time you saw a movie featuring capped and uniformed bellhops laden with the fruits of an afternoon shopping spree? "Girl on the Bridge" plays as if Leconte had set out to pay homage to the doomed romantic fatalism of '30s French melodramas and veered off into the American screwball comedies of the same era. The tone remains ticklishly unstable: At any moment, the movie could offer the euphoria of romantic triumph or the even more cushy euphoria of romantic heartache.

Shot in sumptuous black-and-white by Dreujou, "Girl on the Bridge" might just be the most beautiful-looking movie of the year. Leconte and Dreujou have made the look of the film so silvery-lush that they even pull off showing us a rainbow in black-and-white. Among its other delights, the film is also the swankiest travel brochure the movies have offered in years. Capturing the globe-hopping spirit of '30s comedies and musicals, Leconte, in little more than 90 minutes, whisks us from Paris to Monaco to San Remo to Istanbul to Athens. When Gabor takes Adele on a whirlwind Monaco shopping spree (set to Benny Goodman's great arrangement of Louis Prima's "Sing, Sing, Sing" -- and perhaps a homage to the shopping spree Rudy Vallee treats Claudette Colbert to in "The Palm Beach Story"), it's as if all our fantasies of living the pampered life were being fulfilled at once.

The way Leconte uses Paradis in that sequence -- she vamps it up and twitches her bottom as she models one chic ensemble after another -- recalls Howard Hawks' defense of allowing Ricky Nelson to sing a song in "Rio Bravo": "When you've got some talent, your job is to use it. Because you're making pictures of the personality." Paradis' personality shines through here. Though she has worked as an actress and a model, she's best known (in France, at least) as a pop singer. (I've enjoyed the albums she did with Serge Gainsbourg and the lone American disc she made with Lenny Kravitz, a Cracker Jack prize of candy pop.) "The audience must fall in love with you," Gabor tells Adele. No problem. "Girl on the Bridge" is a cockeyed poem of adoration for Paradis' gamin presence. When Gabor has Adele's hair cut to a head-hugging shag, Paradis is as fetching as Brigitte Bardot was done up in boy's clothes in the first scenes of Louis Malle's "Viva Maria!" Paradis looks like a kid whenever her face breaks into its gap-toothed grin or when she does a little shimmy after striking it rich at the slots.

The moviegoer becomes very aware of Paradis' body here, the contradictions of her broad shoulders and slender waist, the contrast of her enormous eyes and full lips and the planes and hollows of her high cheekbones, her swan's neck revealed by that short coif. If her presence didn't radiate physical fragility, there'd be nothing at stake as she (and we) hold our breath waiting for Gabor's knives to strike their target.

Paradis is a guilelessly charming comic as well. When some new prospect catches her eye, the look on her face as she wafts into his orbit expresses both amazement that someone desires her and an "Oh, what the hell" willingness to play romantic roulette one more time. Too sweet to be carnal, Paradis' performance captures the comic poetry of naughty innocence.

Though Auteuil gets top billing, he's really the setting in which Paradis, the movie's jewel, can shine, and he accepts the assignment with becoming, self-effacing grace. Auteuil's specialty has been middle-aged angst (nowhere better than in Andri Tichini's "My Favorite Season"), the mode he's parodying here. Gabor is a cartoon of wide-eyed obsession, but a cartoon with soul. Auteuil glides from one romantic comedy archetype to another, trying each on to see it how it fits. From moment to moment, he's an ardent lover, a charming con man, a suave gambler and sometimes all three at once. He sets a tone that might be summed up by the name of an album by great jazz saxophonist Ben Webster -- "Atmosphere for Lovers and Thieves."

At the heart of the movie are the scenes where Gabor practices his knife throwing on Adele and she writhes erotically as the flying daggers land millimeters away from her. Gabor's renewed professional prowess with Adele is, of course, a metaphor for sex, but one that's both funny ("Past the age of 40, knife throwing becomes erratic," he tells her) and genuinely erotic. Adele confesses that being Gabor's target allows her to feel simultaneously the greatest pleasure and the greatest danger. That's the movie's vision of what romance should be, the key to both how "Girl on the Bridge" honors its antecedents and why it feels so refreshing right now.

In the past 10 years in American romantic comedies, finding your soul mate has become less a passport to bumpy, exhilarating adventure than an insurance policy guaranteeing smooth, cozy domesticity. The danger of attraction, the sense that love means forever meeting the tests thrown in your way, has all but disappeared. This delicious trifle exudes the risky spirit that American romantic comedies will have to rediscover if they are ever to recapture their glory days. It's a movie where nicks are the merit badges of love.