You people make me sick. 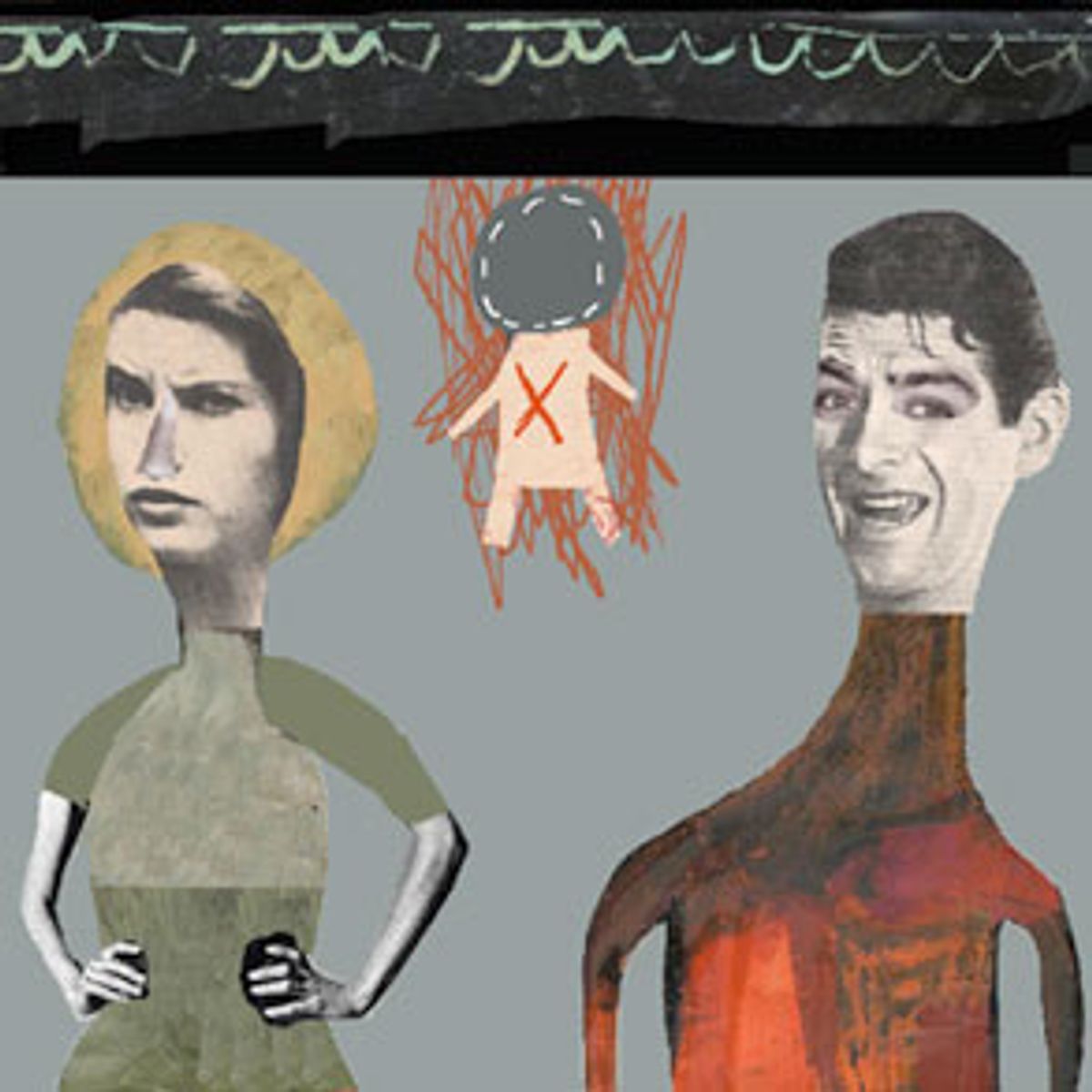 Meet the latest addition to our national roster of victim groups: People without children.

The revolt of the "child-free" has been getting quite a bit of attention, due mainly to the publication of "The Baby Boon: How Family-Friendly America Cheats the Childless" by journalist Elinor Burkett, a manifesto of sorts for this fledgling movement. The premier organization of the "child-free," called No Kidding!, has grown from two chapters to 47 in five years. Most recently, the anti-child/anti-parent backlash is the subject of a long cover story by Lisa Belkin in last Sunday's New York Times Magazine.

The angry nonparents believe they are being treated as second-class citizens in a "procreation-obsessed" America. They feel shafted by the tax code, with all the dependent deductions and child-care credits, and by working-parent benefits such as family leave and on-site day care. They gripe about a lot of things: having to pick up the slack for "child-burdened" co-workers; enduring the noise of squalling kids in restaurants; the unfair privilege of parking spaces reserved for pregnant women and parents with babies or toddlers; inappropriate questioning of their choice not to have children.

Belkin, a mother of two, does her best to be understanding and concludes that parenthood is a great divide: The world looks very different through the eyes of people who have children than it does through the eyes of those who do not. In other words, it's all a matter of which side of the white picket fence you're on. But I'm not so sure.

I have no children; at 37, I don't know if I ever will. While I never made a conscious choice to forgo motherhood, it has never been a top priority for me. However, to the champions of the "child-free," I have this to say:

You people make me sick.

Not that these rebels don't make a few valid points. I share their irritation at the tendency in recent years to frame nearly all political issues, from gun control to foreign policy, in terms of "the children" -- not because it makes me feel left out of the national dialogue, but because it's shamelessly manipulative and an insult to our intelligence.

And I agree that it's ridiculous to demand that women, or men, should have the "right" to devote a lot of time to their children without making any career sacrifices.

But it's equally ridiculous to demand that people who choose not to have kids should have the "right" never to be inconvenienced by the presence of parents and children in this world.

To some extent, this squabbling reflects the peril of looking to the state to distribute wealth: Every group starts clamoring for a cut of the pork. But it's far from clear that parents hog a disproportionate share of subsidies. Conservatives argue that the tax code is actually stacked against families with children, especially "traditional" sole-earner ones; pro-family liberals such as Sylvia Ann Hewlett point out that over the past 30 years, the standard dependent deduction has decreased as a percentage of total income.

What's more, many grievances of the "child-free" are directed at benefits that private companies voluntarily provide to employees or customers. (The unpaid leave employers are required to grant under the Family and Medical Leave Act is actually more inclusive toward nonparents than many private programs: It is available for any family need, child-related or not.)

If a company wants to offer flextime to non-parents as well as parents, or allow personal leave for non-family as well as family reasons, fine. If it gives time off to new parents but not to single folks who want to train for a marathon or take a class in watercolor painting -- well, frankly, that doesn't strike me as a monstrous injustice.

Burkett argues that parental perks amount to extra compensation and thus violate the hallowed feminist principle of equal pay for equal work, taking us back to the dark days when men were openly paid more than women because they had families to support. Ironically, she concludes that in most families with children, one parent (guess which one) should stay at home or work only part-time, because women's attempts to balance work and motherhood end up unfairly shifting the burden to childless co-workers.

But a return to stay-at-home motherhood as a norm would end up creating new pressure for a "family wage" that would keep single-earner families from falling too far behind, and we'd be right back where we started.

In addition to carping about the alleged economic privileges bestowed on parents, the fighters for the child-free are forever whining about other people's children intruding on their lifestyle. Sure, I can think of a few times when a small child started wailing or acting up in a restaurant, at a concert or at a lecture (and, almost without exception, was quickly taken outside by mom or dad). But I can think just as easily of restaurant meals ruined by the braying laughter of a group of adults at the next table, and of train trips on which my plans to take a nap were foiled by someone's loud conversation on a cellphone.

I can also say that my own residential environment became much more pleasant when the couple in the condo unit next door defected from the ranks of the child-free. They used to have raucous parties that lasted into the wee hours. The husband played drums in a rock band and spent hours every day practicing in the basement; quite a few times, he also had the band over for rehearsals. All of that came to an end when the first of their two children was born. (The guy still plays his drums, but on rare occasions and much more softly.) The kiddie parties and family gatherings they sometimes have on weekends are much less loud than the parties they used to have before.

Of course, this is purely anecdotal. But generally, parents tend to behave more responsibly than nonparents in ways that enhance the overall quality of life. They're less likely, for instance, to drive recklessly.

For all the "perks" -- which millions of parents, particularly small-business employees, do not have, and of which many others don't avail themselves -- it is fairly self-evident that life is generally much harder for people with young children.

Compared to their "child-free" peers, parents have less time, less freedom and less disposable income. Working mothers, and fathers who are hands-on caregivers, nearly always lose out on pay and promotions. One study of men and women with MBA degrees in the early 1990s found that while the childless women, single and married, earned only about 4 percent less than the men, the wage gap for mothers grew to more than 20 percent.

Unlike some feminists, I don't believe that these disparities are necessarily unfair -- life is all about trade-offs -- or that the primary responsibility for raising children should be shifted to "the village." Parenthood certainly has great rewards as well as hardships. But there's nothing wrong with some societal recognition of the sacrifices parents make, or some societal effort to make things easier for those who have undertaken this difficult job.

Nonsense, scoff the "child-free" militants: These people made the choice to have children; why is that anyone else's problem? Why, they cry, should I give up anything just because you decided to reproduce?

Try this: Because if no one made the choice to reproduce, none of us would have a future.

On the practical side, do the "child-free" ever pause to think about who will pay their Social Security -- or, even in a privatized system of retirement benefits, what will happen to their investments if a critical shortage of workers sends the economy down the drain? On a more metaphysical note, one of the things that makes us human is our ability to look beyond the moment, including beyond our own lifetime.

Whether or not I ever have children of my own, I am grateful to the women and men who are bringing up the next generation. I don't mind if they get some extra breaks and extra respect. I have no problem with a cultural consensus that regards parenthood as a worthy endeavor and even as a social norm.

No, people who choose not to follow this norm should not be stigmatized or hassled with rude questions. But if you're upset when a well-meaning relative or co-worker tells you it's not too late for you to have kids, or asks if you regret not having any, get over it.

What I find truly infuriating about the "child-free" advocates is their smug in-your-face insistence that there is nothing special about childbearing and child-rearing (heck, why should it be special? It's only about the survival of the human race!), that parenthood is no different from any other expensive hobby like, say, collecting antique dollhouses. It's not just parents they're disparaging, it's the very notion that our connection to future generations matters.

Some of my libertarian friends may think that I'm on a slippery slope in embracing the idea that an individual matters only for her service to society or humanity, not as an end in herself. I'm all for individualism, and I usually wince when people like Hewlett use the term as a pejorative. But let's face it, the issue of reproduction does reveal the limits of individualism. Besides, the mentality of the "child-free" movement goes way beyond individualism; it's sheer narcissism.

Reading Belkin's article and other writings on the subject, I kept wondering: Are these people deliberately trying to sound so obnoxious? There's the 36-year-old man who brags to a Philadelphia Inquirer reporter that he often parks in spaces reserved for expectant mothers and parents with small children: "I'm smart enough not to have children, so I feel I deserve the privilege. Besides, women who have just had children are usually complaining about putting on weight, so they could use the exercise." There is the 37-year-old woman who complains to Burkett that she is tired of working longer hours when co-workers with children get time off for family emergencies: "We are punished for not squirting out spawn."

It's funny that the champions of the "child-free" lifestyle keep insisting that they are not anti-child or anti-parent, and then deride parents as "breeders" and childbearing as "popping a scrog." ("Scrogs" is the epithet of choice for children, along with "crib lizards" and "anklebiters.") Do they realize that they're talking about their own parents, too? And do they realize that this is not a good way to win sympathy for a controversial cause? Supporters of initiatives to abolish affirmative action do not, after all, go around using racial slurs.

An even bigger irony is that so many of these folks who feel victimized by other people's brats sound so much like overgrown brats themselves, stamping their feet and crying, "No fair!" If you ask me, I'd much rather be surrounded by a bunch of crying little babies than by a bunch of whining big babies. The little babies will grow up some day. The big ones, as far as I can tell, never will.