The renaissance of coasters is a bonanza for the amusement park business. 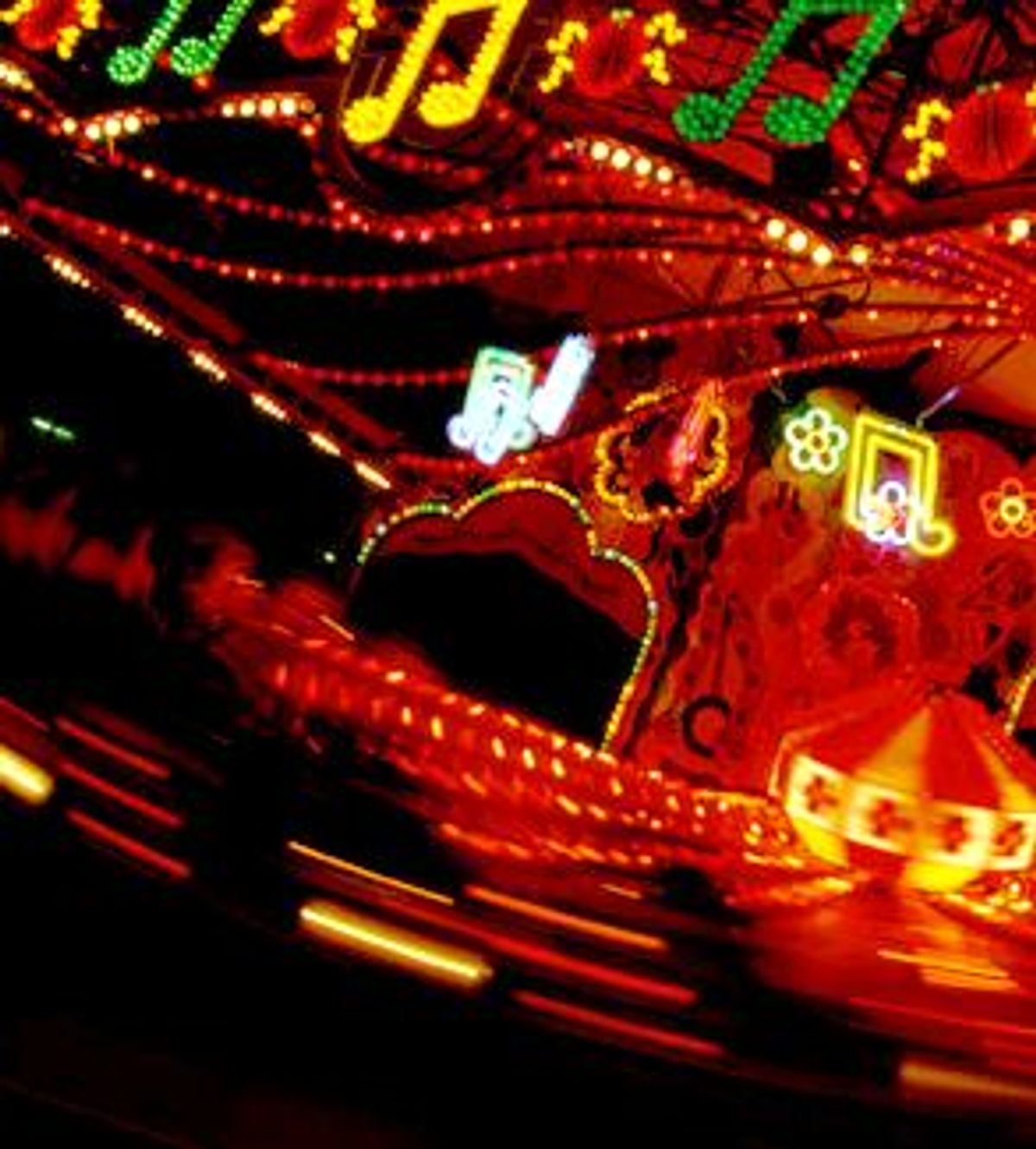 Your heart starts thumping as the floor disappears.

Strapped into Medusa, the newest roller coaster at Six Flags Great Adventure in Jackson, N.J., riders gulp as their cars leave the platform and ascend the 145-foot peak, their feet dangling over the amusement park. From there, it's a blur of wild corkscrews, insanely tight cobra rolls and seven separate inversions at top speeds of 61 mph. What's particularly amazing is how smooth Medusa is. Unlike earlier corkscrew coasters there's no jarring shoulder pain as you roll through the turns. Just sheer, seamless terror.

Not long ago, the unveiling of a ride as wild as Medusa would have been the talk of the coaster circuit, with the host park basking in the glow for summers to come. But when the yellow midway monster debuted last year, Medusa turned out to be just one of 60 new roller coasters to open for business in North America.

The roller coaster industry is experiencing a boom. Some 55 new rides have opened this year, including the $7 million Son of Beast at Paramount's Kings Island outside Cincinnati, the tallest, fastest (and only looping) wooden coaster in America.

Disney may have perfected the theme park business (Disney World's annual operating profits are a staggering $1 billion), but it's the regional, summer-only parks, those bastions of Little League day trips and tristate family reunions, that are still synonymous with the scream machines. Until recently Disney refused to call its speed rides "coasters," opting instead for "thrill attractions." But it's coasters indeed that are fueling business for major players such as Cedar Fair, which owns five parks, including its flagship Cedar Point, and Six Flags (formerly Premier Parks), which operates 34 parks.

"It's a great business," says Peter Swan, securities analyst for Pacific Growth Equities. "Each park owns little monopolies in their specific regions. Except for Los Angles and Florida, you're pretty much left to yourself." And in the amusement park business local competition isn't much of an issue. "Because it's so hard to find 150 acres, and the zoning is so tough, very few new parks are being built."

Consider what happened in 1997, when Six Flags announced it was teaming up with the Mashantucket Pequot Indian tribe to build a 200-acre amusement park in North Stonington, Conn. Local opposition was so strong, Six Flags took its search to East Hartford, and then to nearby Rhode Island. In the end, the company simply purchased an existing park in Agawam, Mass.

Dan Poole, vice president of equity research, who follows Cedar Fair for NatCity Investments, notes the parks do well during economic boom times, but that they weather recessions, too. "If you can't afford the big vacation to Florida, you pack up the kids and spend a weekend at Cedar Point."

"They generate a large amount of cash flow and the margins are stellar," adds Swan. "It's not as sexy as the latest telecom play, so it doesn't get that much attention. But it's a good, patient, long-term investment."

Just ask Time Warner. In the early '90s the entertainment giant purchased Six Flags for $120 million, along with the assumption of $550 million in debt. In '98 Time Warner sold its stake in Six Flags, known as a coaster haven, to Premier Parks for $1 billion.

Park operators like Time Warner can thank coasters for adding marquee value to their parks. "Bigger, better, faster rides drive the gate," says Tim O'Brien, editor of Amusement Business magazine. "You can put in a new Broadway show and make an investment in more kiddyland rides, but what really drives business is the roller coasters."

Time Warner just received a rude reminder of how important coasters are to the parks business. Earlier this month a Georgia court of appeals upheld a $454 million verdict against the company. The suit was filed when Six Flags investors accused the media giant of trying to deflate Six Flags Over Georgia's value before selling it to Premier. The central charge: Time Warner delayed installing a new Batman coaster ride.

Six Flags Over Georgia eventually got its new coaster, as has virtually every park in the country. "This rivals one of the all-time booms," says Dave Escalante, public relations director for American Coaster Enthusiasts. Some are calling this high-tech, steel-driven coaster boom the second golden age of coasters, rivaling the boom of the early 1900s when 1,500 amusement parks were operating in America, nearly all of them boasting a wooden coaster. (American amusement parks bottomed out right after World War II, and it wasn't until Walt Disney unveiled his Florida family vacation destination that they began to rebound.) "People are fascinated right now. They like to play out their fears, to see how far they can go. It's really an accomplishment to go through that, to say I just rode the fastest coaster in the world. And for families it's something to do together."

With so much coaster competition, parks are scrambling to keep up with new construction. Medusa may have been a hit last summer, but this season there's a new kid on the block that's leaving riders speechless: Millennium Force at America's unofficial coaster mecca, Cedar Point in Sandusky, Ohio. Rising 310 feet above Lake Erie and capable of a peak speed of 92 mph, the so-called giga-coaster -- which cost $25 million to build -- breaks all the records: tallest, fastest, wildest.

"I can't think of any words that would do justice to what riding that thing is all about," says analyst Poole. "It's pretty awesome." (Next month, the 318-foot-high and 95-mph fast Steel Dragon 2000 debuts in Japan.)

The major amusement parks need those coaster boosts for business. For instance, attendance at Knott's Berry Farm in Buena Park, Calif., was up 6 percent last year according to Amusement Business, thanks mostly to its new wooden coaster. On the flip side, Cedar Point's attendance fell in '99, a year when it debuted no new major attractions.

This year Cedar Point's Millennium Force is expected to host 3 million riders, while the park's attendance stands around the 3.3 million mark. (Lots of fans will ride Millennium more than once.) But with its $25 million price tag, does Millennium make for a smart investment? While it's impossible to tell how many people visit Cedar Point for Millennium, or any other specific ride, "traditionally these rides pay for themselves in one season," sways Swan. "Millennium may take two seasons because it's very expensive. By the third quarter we'll see whether or not this thing is going to pay off. My guess is it's helping attendance, maybe a 6 or 7 percent increase this year. But you never know, it could be cloudy, crummy weather in Ohio."

Highlighting that inherent risk, last Monday Cedar Fair president and CEO Richard Kinzel told analysts to expect lower-than-expected earnings for the second quarter. "Comments regarding the new rides we introduced for the 2000 season have been extremely favorable, but we have't yet seen the expected impact on attendance," said Kinzel, who blamed "cool and rainy weather," for the soft showing. "It's a rough, a whimsical business," notes O'Brien at Amusement Business. "Mother nature is boss." Meanwhile, highly leveraged Six Flags has its concerns, too, as its stock continues to slide downward this season.

Regardless of this season's attendance outcome at Cedar Point, Millennium's hype already allowed Cedar Point to boost the summer admission by $5, to $38. So even if the park's business is flat, that will mean roughly $16 million more in gate fees. "People aren't calling about admission fees," says O'Brien. "It's more like, 'What have you got that's new this year?'" Taking their cue from Disney's aggressive pricing, parks are not shy about raising rates. Six Flags Great Adventure's adult admission is a hefty $44. Add tax and mandatory on-site parking and it suddenly costs $54 for one adult to visit.

But the take at the gate is only half the game for amusement parks. From the moment visitors walk into Six Flags Great Adventure they're bombarded not only with Backstreet Boys and Britney Spears songs shooting from every corner of the park but with ways to spend more money: $9 group photos, make-your-own $15 karaoke video, $2 arcade games, $4 pretzels, $5 laser tag games. On average, the post-admission, per capita spending at big summer parks is $30 per person. Last year, Cedar Fair took in $217 million in admissions, and $184 million in food, merchandise and games. According to Six Flags' annual report, the company earned $500 million in admissions and $426 million in food, merchandise and other in-park expenses.

That's why parks are so generous with season passes ($75 for the entire summer at Six Flags Great Adventure) and midweek two-for-one promotions. Once visitors set foot in the park, the money continues to flow.

Unless, of course, they're stuck in one of those long, snaking lines from hell that riders must endure for the most popular coasters. When Millennium Force first opened, Cedar Point fans were experiencing three-hour, even four-hour, waits. That despite the fact the ride can handle an amazing 1,800 passengers per hour, thanks to three cars running simultaneously. Truth is, park operators hate lines just as much as riders for a very simple reason: "Those wallets are stuck in people's pockets," says Poole at NatCity. In other words, visitors can't buy T-shirts or taffy or balloons if they're captured in line for half the afternoon.

In order to free up those wallets, Cedar Point has instituted its version of Disney's FastPass tickets, which assigns a specific time for visitors to get in line for the blockbuster rides and thus cuts down the waiting time. "It helps customer satisfaction and increases incremental revenues," says Swan.