Hip Sci Fi Channel psychic John Edward puts new life in the talk show genre -- even if his guests are dead. Plus: VH1's "The List." 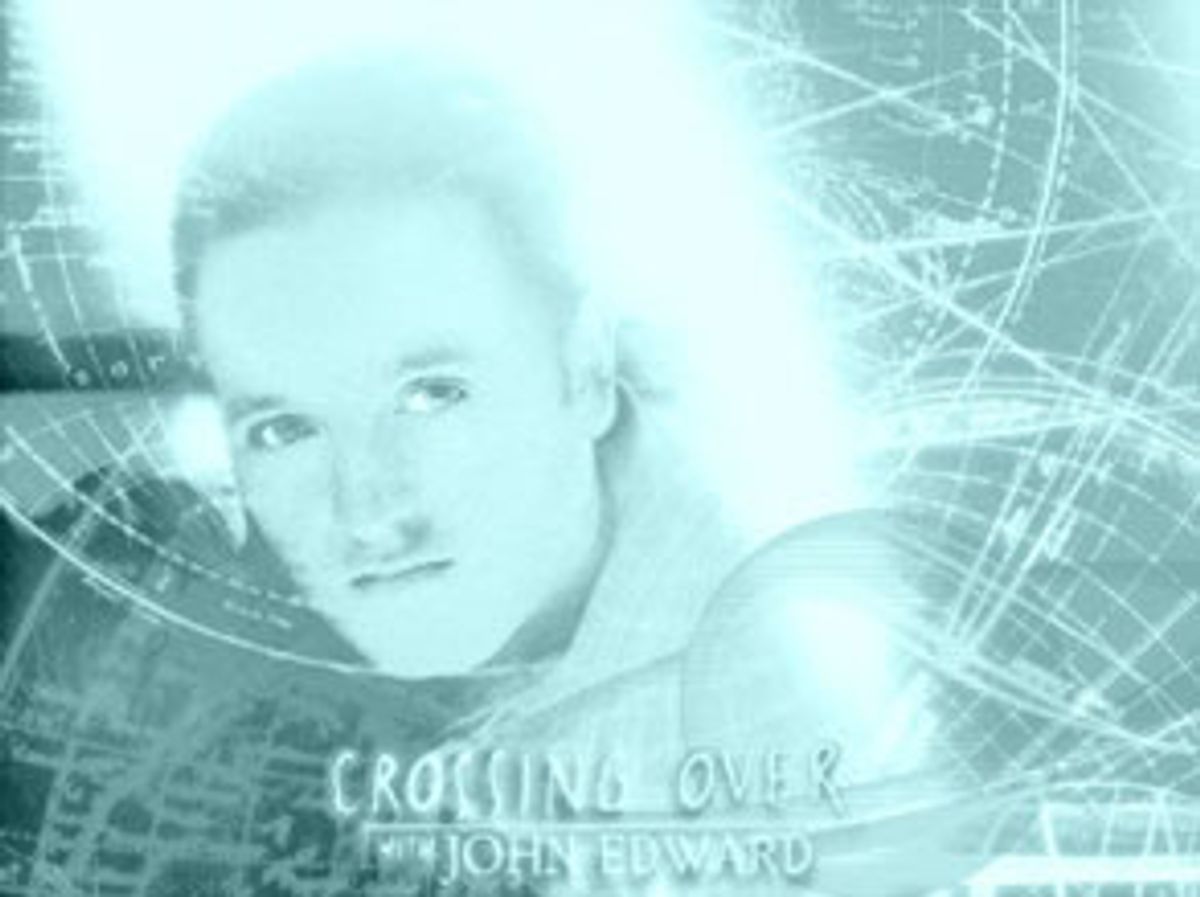 Pity the poor talk show. Once the reality genre of choice, it has been brushed aside by viewers looking for a higher class of voyeuristic kicks. "Survivor" and "Big Brother" stopped Springer-mania dead in its tracks, and the celebrity talk show is in wobbly shape, too; downwardly mobile stars (Roseanne, Martin Short, ex-"Cosby" kid Tempestt Bledsoe) used to line up every fall hoping to be the next Oprah, Rosie or Ricki, but the slate is empty this year. Even Donny and Marie just got canceled.

It seems that the only way to launch a successful talk show lately is to disguise it as something else. ABC's "The View" is a talk show in "debate" clothes, like an all-girl version of "Politically Incorrect." Jon Stewart's "Daily Show" is a talk show disguised as sketch comedy. MTV's "Total Request Live" is a talk show disguised as a countdown, with Britney Spears and 'N Sync dropping by the studio to hype their latest videos. But as far as talk show gimmicks go, it's hard to beat the Sci Fi Channel's new series "Crossing Over With John Edward" -- because Edward's guests are dead.

Edward, 30, is a medium, you see, which means he receives messages from people who have "crossed over." He's just like the kid in "The Sixth Sense," except he's having fun. The immensely likable Edward looks like a beefier John Cusack and dresses casual-Friday-like in jeans, biker boots, T-shirts and suit jackets; he has a rapid-fire way of talking and a homey Lawng Island accent. On his half-hour show, which airs Sundays through Thursdays at 11 p.m. (8 p.m. Pacific time), there's no crystal-ball gazing, turbans or Carnac the Magnificent flourishes. Edward stands inside a semicircle of audience members who are seated on bleachers; he closes his eyes for just a minute and then springs into action, energetically rattling off images he appears to be seeing in his mind's eye.

"I'm being pulled over here," Edward might say. "Who over here has the 'J' connection? Jane, Joan, Jenny? You? June? OK. They're showing me an older male figure. Has your father passed? Was it from a heart attack, because I'm feeling a heaviness in the chest." And then the messages -- usually acknowledgments of recent family events and reassurances that the deceased is floating around in the ether with other dead relatives and friends -- start coming. I know what you're thinking ("Crackpot!"), but bear with me. I'm generally to the right of Scully when it comes to these things, but after watching Edward for a couple of weeks, I seem to have gone a little Mulder.

Edward's readings are intriguingly specific. He'll know names (or, rather, the sound of names), the manner in which people died and odd, sometimes incredibly mundane details from their lives. On recent shows, he correctly divined that one now-deceased woman had worked in costume at Disney World, which he sensed by a "fuzzy" feeling; another had found a mouse in her house and given it a name; and a now-deceased man used to have a habit of absent-mindedly leaving stores with items he hadn't paid for.

Then there's the really weird stuff, like how Edward received an image of one audience member's two dead dogs and a donkey she'd had as a child. ("This is so weird, because they're showing me a picture of Eeyore. Do you have, like, a donkey?") The baffled woman had come to the show to connect with dead humans, but only her pets' spirits came through. Or how he sat down for a one-on-one reading with one person and admitted that he just couldn't "connect" to him, and suddenly started getting messages from the dead relatives of a nearby cameraman.

I suppose it's possible that it's all a big hoax, that the audience members are plants who've been interviewed ahead of time. Or it could simply be that Edward asks leading questions of people who are still raw with grief, and that he's very good at sensing when he's hitting a nerve. All of the spirits who come through, according to Edward, are watching over the living. Who wouldn't want to hear that? Who wouldn't want to have their childhood notions of heaven validated?

In a lengthy 1997 Newsday article, reporter William B. Falk set out to debunk Edward, interviewing noted skeptics like James Randi, bringing in people for Edward to read, even sitting for a reading himself; he ended up unable to conclusively attribute Edward's accuracy to trickery, and moreover, Edward really freaked him out. In the same article, Edward's family talked about the eerie talent he had exhibited at an early age; they say he knew of family history that happened long before his birth and could predict things that eventually came to pass. Nobody made a big deal about his seeming psychic abilities, though, and Edward eventually graduated from Long Island University and embarked on a career in healthcare administration. But the messages kept coming (clergy started to send grieving parishioners to Edward for comfort), and he soon became a local legend. Edward's book "One Last Time," in which he explains his theory of messages from the afterlife, reached No. 1 on the Los Angeles Times bestseller list in November 1999, a year after it was published.

In interviews, Edward has described his sense of knowing when a deceased person's spirit is trying to contact him as a "prickly sensation on the back of the neck -- like in 'The Sixth Sense.'" The deceased communicate with him, he says, in symbols, numbers, pictures and feelings that he must decipher. He often goes through an elaborate game with the dead person's relatives, stubbornly repeating the same cryptic message over and over until it clicks. "I could very easily just go, 'He wants me to tell Mom he says hi,'" Edward tells an audience member after a particularly balky translation. "But I don't feel comfortable doing that because if I were sitting there I wouldn't believe me." And here's the goofy part: Often, the messages come to him as images from old TV shows ("Who had the house like the one on 'The Brady Bunch'?" he'll ask) -- the deceased are apparently fitting their messages into his frame of reference. Which is kind of reassuring, I suppose: The afterlife is one long, pleasant Nick at Nite marathon.

Hogwash? Maybe. But what if Edward is for real, and he's exchanging some kind of mental energy with the departed? He certainly doesn't come off as a rank huckster -- we're not talking the Psychic Friends here. There's something about the guy's sweetness and easygoing manner that sticks with you. You want to believe that he's using his superpowers for good, not evil; he reminds viewers at the end of each show to "communicate, appreciate and validate" in this life so you "never have to come to someone like me" with unfinished business when it's too late. Could Edward's no-hucksterism be the sleekest hucksterism of all?

At any rate, the guy is too good a host for the cheesy infomercial look of "Crossing Over." He's charismatic and sympathetic, he can converse with anybody (dead or alive) and he relaxes people with his down-to-earth affability. Whatever you think of Edward, it's a kick watching him work; with the right format, he could do for the paranormal what Emeril Lagasse has done for cooking. So why not give Edward a more professional-looking gig. Hey, why not put him in charge of another talk show that hasn't lived up to its potential, VH1's "The List"?

Modeled after "Politically Incorrect," the nightly "List" is a wasted opportunity that leaves me depressed every time I have the misfortune of surfing into it. On "The List," four B-list celebrity panelists (inexplicably, somebody from "That '70s Show" is on every time I tune in) and a host (George Wendt! Lars Ulrich!) "debate" musical topics like "The Greatest Beach Song of All Time" and "The Greatest Video of All Time." As on "Politically Incorrect," there is no real debate, only shouting and one-upmanship, and things degenerate pretty quickly into taunts about panelists' alleged sexual preferences.

Now, as any music lover knows, screaming matches about Top 10 lists can be pretty damn entertaining, if done right. (See "High Fidelity.") But "The List" is clueless. Occasionally, somebody who actually knows something about pop music is mistakenly booked on the show and the results are kind of like the 1988 presidential election -- the guy with the brain is doomed to abject defeat. On one recent show, the topic was "Greatest Rock and Roll Hellraisers," and actor W. Earl Brown (who played Meat Loaf in the VH1 biopic) impeccably chose Jerry Lee Lewis. But he was shouted down by host Ashton Kutcher of "That '70s Show" (Ashton Kutcher!) and some stand-up comedian I've never heard of. Their argument: Jerry Lee Lewis couldn't be a rock 'n' roll hell-raiser because he played the piano.

As a TV version of a sacred music-geek pastime, "The List" is so not worthy. To do it right would require filling the panel with fussy, obsessive critics, cranks and collectors (Greil Marcus, Nick Hornby, Elvis Costello and Dave Marsh all leap to mind), and you know that ain't gonna happen. So why not take two so-so talk shows and merge them into one spectacular hybrid that unlocks the potential of both? I say, make Edward permanent host of "The List" and set him up with a panel of relatives and friends of dead rock legends. "Who has an 'L' or an 'EL' connection? You, Lisa Marie? OK. They're showing me an older male figure. Was this person a king, 'cause they're showing me a crown? And a TV with a hole in it. I'm getting the sense that there was an issue with someone throwing something at the TV or shooting it ... He's showing me peanut butter and bananas. He wants everyone to know he's OK, he's with Gloria, Glynis -- Gladys! -- and his No. 1 pick for best girl group of all time is the Supremes."