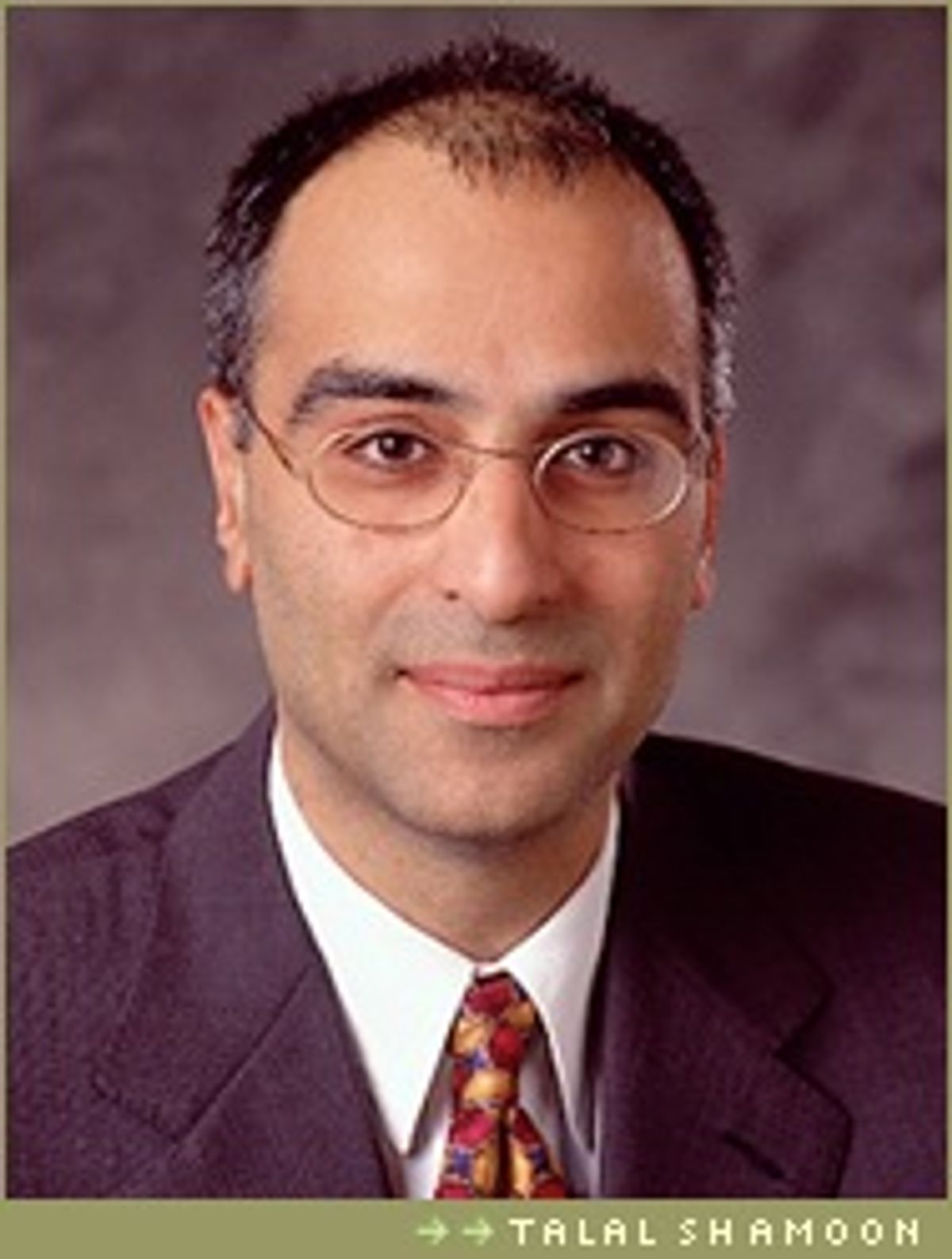 Talal Shamoon is in the digital music world but has yet to be sucked into one of its heated legal battles. While Napster, Scour and other file-swapping services exchange courtroom blows with the record labels, Shamoon remains on the sidelines, working to create a system that he thinks users, recording artists and the record labels will all choose not because they have to, but because it's better.

To achieve this, Shamoon juggles two jobs. He chairs the Perimeter Technologies Working Group at the Secure Digital Music Initiative (SDMI), -- an association of 180 music and technology companies that seeks to "develop open technology specifications that protect the playing, storing and distributing of digital music such that a new market for digital music may emerge." And he is an executive vice president at InterTrust Technologies, a digital rights management company that helps clients like Universal Music Group and BMG Music decide how and when to distribute their content online. Basically, Shamoon is using his dual roles to find a way for record companies to gain control of digital music and stamp out piracy.

It's a task for which he is uniquely qualified. His doctoral thesis at Cornell focused on audio compression and at the NEC Research Institute, where he worked until joining InterTrust in 1997, Shamoon was one of the original four scientists who developed watermarking -- a way to lace digital content with invisible copyright information that can then be used to limit access. The record industry is hoping that watermarking will give it back the keys to its content kingdom, but Shamoon says protection is only part of the problem.

Last week, as Napster battled the recording industry in court, millions of songs were being traded free online, and other peer-to-peer technologies like Gnutella started drawing crowds. If widespread music-sharing continues -- if the genie is already out of the bottle -- can record companies really expect consumers to cross over to their own SDMI standards?

Well, the genie's not really out of the bottle. This is one of my big problems with the way people analyze this market. If you see it as a war between pirates and content creators, then it's under a completely different light than how I think it should be seen. Really, these are market conditions that have caused a black market to emerge. People are copying music because they feel somewhat disenfranchised with the options they have at their disposal in the digital space. It's up to the content industry to create value in the digital arena and they've made phenomenal steps in that direction.

So the way you stop people from ripping music and using things like Napster is you basically put music out there in protected format and you make it a good, quality experience. And there are steps being taken in these directions.

And SDMI is one of them?

Yes. SDMI is a standards body which is sort of intent on finding ways for open MP3s to cohabit with protected music. What SDMI serves to do is create a parameter between the open world and this new protected world at least in order to buy the protected world a little bit of space while people fill it with music.

How do the members of SDMI plan to do this?

The specification that's been written so far speaks to two things. One is a set of good housekeeping tips on how to keep protected music protected. So it's not a specific technology. All the specification says is, "if you download a song to a PC it should be protected; if you transfer it to a portable device, the wire along which it travels should be protected and the portable device itself should keep it protected." How you do that is up to you as long as you conform to these rules.

The other part of SDMI is more specific. It talks about screening technology, which at this point uses a specific set of algorithms from a company called Verance. The goal of the screening technology is to solve the following problem: You have an SDMI portable device that plays protected music. You want to let people transfer MP3s they've ripped to that portable device. You don't want to let them transfer MP3s they've gotten from somebody else who's ripped them, i.e. from something like Napster. And what you want is technology that basically examines an open MP3 file that's being transferred to a portable device and decides whether or not it should be admitted to the portable device.

So in order to do that, there's a call for technology from different parties to provide that screening system. We're about a third of the way there. Today, in deployment, we have an algorithm by Verance that's sitting there dormant waiting to be activated.

How does it work?

It's watermarking, which uses a set of techniques to hide a message in a signal. Usually what you do is place a message in part of a signal that makes it inaudible but very hard to remove. There's an assortment of tricks for doing that. That's the essence of watermarking.

And the message can say anything you want it to. Usually they're short messages that say one of two things. The SDMI phase one message says either we're in phase one or phase two has started. If it says phase two has started, then a trigger piece of software tells the user that they need an upgrade. This upgrade implements the phase two screening technology, which looks for misappropriated content and then blocks it from being transferred, or just decides the content isn't misappropriated and lets it through.

Phase two technology hasn't been chosen yet. So all we have in place is the technology for the trigger. And music companies -- all of the majors have made noise about it -- are saying that they'll be shipping content with trigger capacity in it over the next month or two.

But this watermarking won't do anything for the millions of songs that are already available online as MP3s ...

Are there any plans to try and put these under the SDMI umbrella?

No. I would be amazed to see technology that could do that. That's sort of like calling the missiles back.

Then how could the music industry counter something like Gnutella, which can offer access to songs without watermarking -- and for free?

Well, there are two ways to do it. One is you create value; the other is you go after the pirates and try and shut them down. They're doing both. The RIAA is doing a great job in court -- going after people who, under the law are actually pilfering music, and shutting them down. The Napster ruling is yet another step in that direction.

Do I think that Gnutella will move in where Napster stopped? I personally don't, the reason being that Gnutella requires you to set up a direct connection with an individual you've never met. So where the dangers surrounding Napster, regarding viruses and child molesters, were moderately nebulous, they're going to be very severe with Gnutella.

I don't think that's the way people build communities on the Internet. People build communities through a sense of space. Napster very much defines a locus that you go to in electronic space and in that sense it's very potent -- either positively or negatively. If Napster went out and got some digital rights management systems, I think they could rehabilitate themselves.

Of course, since you happen to work for a company that sells digital rights management systems, InterTrust. It sounds like you're offering to help. Has Napster spoken to you about this?

I can't comment on open business developments, but we've spoken to just about everyone who's touched a music signal, so ...

OK, then why don't you tell me what InterTrust could do for Napster.

InterTrust provides a digital rights management platform for protection and management of information. It's being used very heavily by certain parties in the music industry. The idea is that we're a trusted platform that gives people one-stop shopping for protecting and managing content. The way it works is, you take music for example, and associate it with rules that spell out things like business models, usage information, privacy information and so on, and you send it out with the music.

Our platform talks to players that are written by partner companies like RealNetworks through Universal Music Group and now Winamp through America Online, which serves up music to consumers. So we sell platform technology for electronic commerce.

How much leeway is there with InterTrust? Can labels give music away if they want to?

The Intertrust platform is fully programmable. It's really up to, say, AOL and the record labels how they want to configure it. I can't comment specifically on how the specific partners have decided to build it up but it's very, very flexible.

You can do things like super-distribution, for example, where you can e-mail the song and say, "If you get 10 of your best friends to buy it, I'll give you free tickets to the Britney Spears concert next month." So you get on AOL and you e-mail the thing to 50 of your best friends and so on. And with InterTrust you can go down as many levels as you want, so they can e-mail it to 50 of their best friends, turning the consumer into a distributor of sorts. We think offers like that are going to be very compelling.

In the long run, where do you see the music market going? How will the next generation get its music?

SDMI will establish the ground rules, the common denominator that people will build to. Beyond that I think the music companies are going to start teaming with codec manufacturers, teaming with rights management providers and ultimately delivering electronic music distribution to the consumer. Then, there's basically going to be a fight where the marketplace will decide what the best value proposition is. Remember, this is a very standards-oriented business. There is one CD out there and it works in one very predictable and deterministic way, and I think at the end of the day, something like that will prevail.

Now, there's a lot of twiddles there because computers allow you to do a lot more stuff than consumer electronics devices, but that's basically where we'll stand. CDs are what they are, people will be putting them out for a while. There will also be new music available in protected formats, some of which will be available only in protected format, and what I think you'll see is a behavior shift among consumers, more than anything else.

No one has suffered phenomenal losses from any of what's gone on so far. We're still in a very nascent part of the space. I think what will happen is that there will be a period where protected music will cohabit with CDs. People will rip CDs for a while. But if people [in the music industry] do their job right, the incentive to rip CDs en masse will go away. Then the industry will adopt a common encrypted format and CDs will go away the way LPs went away.