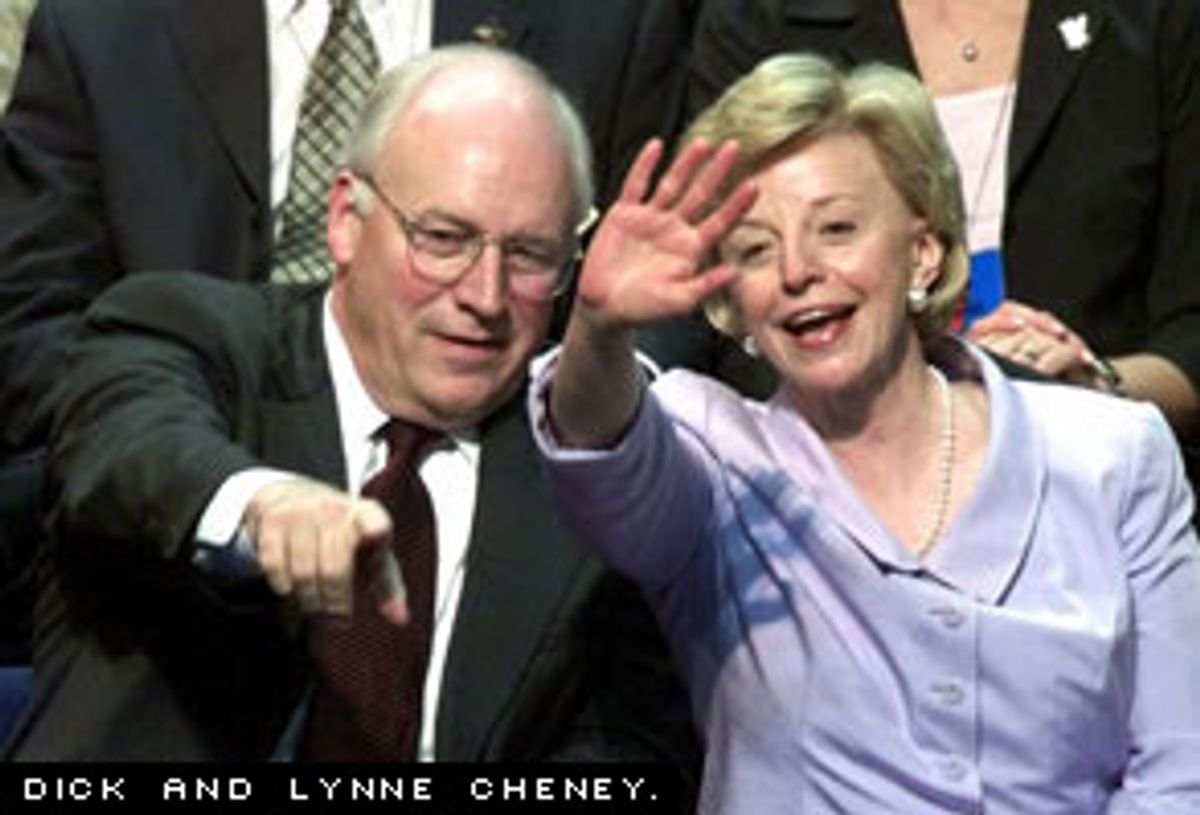 Lynne Cheney's discomfort with the media's interest in her lesbian daughter Mary, televised nationally over the weekend, threatens to ignite the first firestorm of the so-far superbly scripted Republican convention.

On Sunday, when ABC's Cokie Roberts started to ask the GOP vice presidential nominee's wife about having a daughter who has "declared she's openly gay," an irate Lynne Cheney shot back: "Mary has never declared such a thing." Cheney then blasted the media for its interest in the story, and chided Roberts: "I'm surprised, Cokie, that even you would want to bring it up on this program."

"I have two wonderful daughters. I love them very much. They are bright; they are hard-working; they are decent. And I simply am not going to talk about their personal lives," Cheney told Roberts.

Nationally, many gay leaders were alarmed by Lynne Cheney's remarks. The distaste implied by her use of the term "such a thing" to describe her daughter Mary's sexuality didn't come across as ringing acceptance. And some see it as an attempt to force Mary Cheney -- who has in fact publicly "declared" herself a lesbian, and has worked as the gay and lesbian corporate relations manager for Coors Brewing Co. -- back into the closet, at least on the campaign trail.

The controversy could bubble over this week, since friends of Mary Cheney say she's planning to bring her life partner, the woman she shares a house with in Conifer, Colo., to the Republican convention. She has reportedly postponed plans to attend business school this fall in order to campaign with her father, former Defense Secretary Dick Cheney.

Gay leaders wasted no time blasting Lynne Cheney's remarks to Roberts. "They were horrible," said Human Rights Campaign spokesman David Smith. "She said she is proud of both her daughters, but there was definitely a sense this was one aspect of who her daughter is that she was not proud of. That came through loud and clear."

"The fact that [Mary] is lesbian is not a private matter," he continued. "It was part of her job. She reached out to the gay and lesbian community for a major U.S. corporation. She was on the cutting edge of changing how a corporation reaches out to gay and lesbian customers."

Cheney herself told a lesbian magazine that she went to work for Coors "because I knew several other lesbians who were very happy here." Friends and colleagues say she has declared her sexuality in public on many occasions.

Denver colleagues laughed at the assertion that Mary has never "declared" her sexuality. "Of course she did," said Jim McNulty, co-founder of the organization that puts on the popular Aspen Gay Ski Week, which Coors has supported throughout Mary Cheney's tenure. "Did she tell me she was a lesbian? She said, 'This is my life partner.' That's exactly how she put it. They kissed and hugged, which is wonderful."

"It's been widely known for a long time that she's gay and not shy about it," says Elizabeth Birch, HRC executive director, interviewed Monday in Philadelphia where she attended a luncheon to honor gay Republicans. "I think she's between a rock and a hard place. The issue now will be whether she's locked in the vault -- literally or figuratively," Birch offered.

Friends of Cheney say they're "pretty sure" her girlfriend plans to join her at the Republican convention some time this week, and that Cheney wants the emotional support. "If I were in that vortex in Philadelphia, I'd want her to be there," said one close friend. "And I think if [the girlfriend] has it in her power to be there, she'll be there."

But he cautioned that the girlfriend's identity might remain hidden through the festivities. "There are ways of staying out of sight," he said, though he noted she "doesn't expect to remain private forever," he said. Salon and other news organizations know at least the first name of Cheney's girlfriend, and a photo of the pair is in circulation, but to date her identity has not been revealed in order to protect her privacy.

Some of Mary Cheney's friends agree with gay leaders' take that Lynne Cheney was attempting to shut down the sexuality story by shaming the press out of discussing "private" family matters. "She was trying to divide the world into those who get to ask personal questions about their family, and those who don't," a friend of Mary's said. "She looks like she thinks she has found a way to build an iron cage around the gay canary."

Friends say Mary Cheney came out to her parents at some point in her 20s, and that her father seemed to take it better than her mother. Father and daughter are known to travel together, enjoying hunting and fishing, but Mary Cheney is said to be less close to her mother.

The Mary Cheney imbroglio threatens to upset the GOP's plans to project a new, big-tent image to the nation in Philadelphia. The party is trying to use the convention to show a different face to the country, scheduling Republican women, blacks, Latinos and gays to make prime-time speeches all week long. Rep. Jim Kolbe of Arizona is expected to be the first open gay ever to address the GOP convention on Tuesday night -- though he'll be talking about trade issues, not gay rights.

On Monday, Kolbe and Republican strategist Mary Matalin addressed a luncheon held to honor gay Republicans. Guests were divided on the question of how the GOP is handling both Mary Cheney's sexuality, and the larger issue of gay rights.

Birch believes both the Cheney family and the Republican Party are at a crossroads on gay issues. "There are four daughters between two families [the Cheneys and the Bushes] and only one is positioned to be left behind by public policy in the U.S."

Bush's positions on gay issues, Birch argues, have been "negative at worst and muddled at best. If this is going to be an affirmation party," as Bush has been promoting all week, "how [Cheney] is treated will be very important."

Birch and others pointed to the anti-gay language in the platform the GOP adopted this week. Although platform chairman Wisconsin Gov. Tommy Thompson tried to remove the language, he was overruled, and the Bush-Cheney camp was perceived as spending little or no political capital to back him up.

"It's an extraordinarily hostile gesture, reaching back to the dinosaur age," Birch said. "We commend Tommy Thompson for his efforts, but it doesn't bode well for the party if they're trying to usher in an era of compassionate conservatism."

But Carl Schmid, who was part of the "Austin 12" group of gays who met with Bush in Texas in April, defended the Bush campaign's relationship with gays. "He was the first Republican nominee to meet with a gay group. He didn't have to come out with us to meet the press, but he did."

And Rich Tafel, head of the Log Cabin Republicans, doesn't believe Lynne Cheney is trying to closet her lesbian daughter.

"Lynne Cheney," Tafel says, "is very afraid that that will become the story. My sense is that Mary Cheney is going to campaign with her father." Tafel thinks the fact that the GOP nominee has a lesbian daughter is "huge. For over a decade, our opposition has called themselves a 'family values' coalition. Now gays and lesbians have families, too. If [Dick] Cheney loves his lesbian daughter and she loves him back, that will singlehandedly destroy the hateful rhetoric" represented in the platform, Tafel believes.

Christian conservatives, Tafel claims, have been silent about Mary Cheney, which he sees as proof that the Texas governor has "frozen out" some of the right-wing elements of his party. Over the weekend, Jerry Falwell did describe Cheney as "errant" in a newsletter, but so far the ultra-right has been silent on the issue.

But Birch believes the early response to Mary Cheney -- including her mother's nationally televised evasion on ABC -- "are not good signs of where the Republican Party is going." Gays still have a "Mount Everest to climb in the GOP," she contends, adding flatly: "There is no reason for gays to vote for Bush."