There's plenty of love for Mary Matalin, George P. and Laura Bush inside the GOP Convention -- but it isn't spreading to the streets. 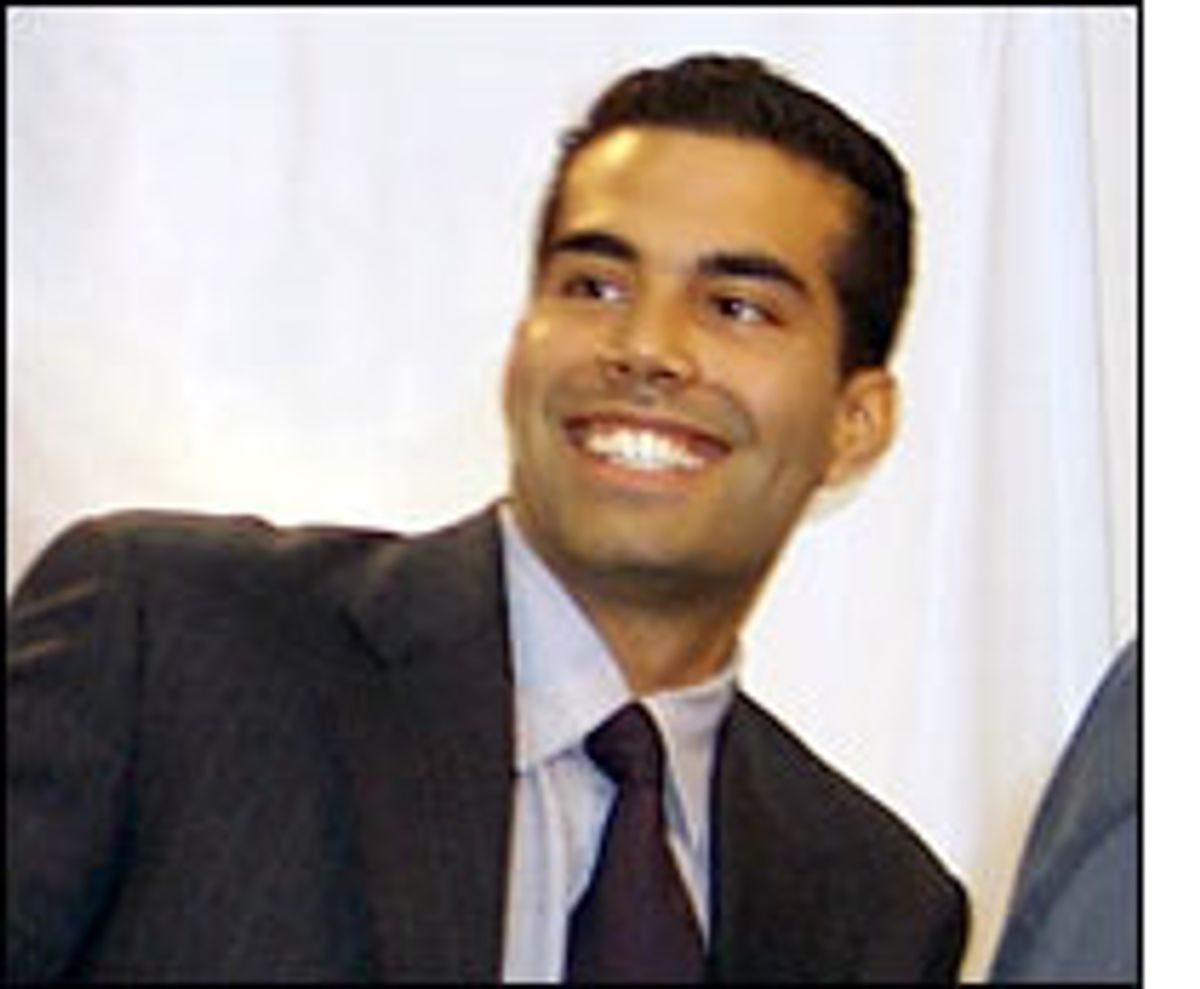 After a quiet early start to the Republican Convention, a barrage of protests shut down parts of Philadelphia Tuesday, with police and demonstrators battling for control in the streets, resulting in hundreds of arrests. The blame game has already started, with American Civil Liberties Union representatives pointing the finger at police for brass-knuckle tactics, and the police saying belligerent protesters are at fault.

From Salon's Philly notebook:
The appearance of George P. Bush, the yummy young nephew of the Republican's presidential nominee, caused a minor stampede in one media tent at the Republican Convention Tuesday. The GOP's youth chairman got a rock star welcome from the press when he sat down for a five-minute interview with Michael Collazo of the Latin OnLine News Network. But it seemed only Collazo was interested in what George P. had to say. Anyone trying to overhear snippets of the interview was thwarted by the jostling of the political paparazzi.

After George P. and his entourage left the set of Media Bureau Networks, the outfit that broadcast the interview, journalists started plying Collazo for details. "It's not the first thing we've done," he said, "but I guess it'll be the first thing someone pays attention to." (Alicia Montgomery)

It's a scene recalling Looney Tunes' Sam the sheepdog and Ralph, those wily enemies during the day and amiable acquaintances off the clock: As Oliver North gets off the golf cart that's taken him to the First Union Center for the convention, he passes lefty-gadfly Al Franken, preparing to leave the premises on said golf cart.

Sharp-tongued CNN "Crossfire" host Mary Matalin showed probably the most compassionate face of compassionate conservatism this week in her appearance at a swanky luncheon honoring gay Republicans Monday on the 50th-floor Top of the Tower restaurant. Unlike other media celebutantes ferried around Philadelphia with sycophantic handlers in tow, Matalin came to the event literally carrying her own baggage. It took a moment for her to pack into a crowded elevator leaving the event, with her small (log) cabin-friendly luggage. But her adoring audience quickly made room as she cried out, "I'm Xena, Xena" and made room for herself.

In the elevator, one man said, "Mary, you're fabulous. We appreciate what you're doing for us." Apparently responding to the GOP's anti-gay platform language, Matalin said, "I just don't understand it."

A reporter asked, "Now that we're leaving, how about a quick show of hands of those who really plan on voting for Bush in November."

Only about half the approximately 15 people in the elevator raised their hands. Matalin, however, did dutifully raise hers. (Daryl Lindsey)

Powell bashes GOP -- and they love it
He turned down a chance to be vice president, but after retired Gen. Colin Powell's speech to the GOP Convention, he could get a spot as party whip. The Washington Post reports that, even as he praised George W. Bush's attempts at inclusion, Powell scolded the Republicans for giving blacks back-of-the-bus treatment. "The party must follow Governor Bush's lead and reach out to minority communities and particularly the African-American community -- and not just during an election year campaign," Powell intoned. He also criticized those who "miss no opportunity to roundly and loudly condemn affirmative action" but stay quiet about "affirmative action for lobbyists." Despite the tough love, the Republicans cheered loud, lustily and long for Powell.

Lady Laura speaks up
We knew she could do it. Laura Bush also wowed the crowd at the opening night of the Republican Convention, holding her own as a warm-up to Powell's thunderous close. USA Today reports that the former school librarian spoke loud and clear in support of her husband's candidacy, declaring that he would bring high moral standards and consistency to the White House. "His core principles will not change with the winds of polls or politics or fame or fortune or misfortune," she said of her husband. "He shares credit and he doesn't cast blame. He sets a tone that's positive and constructive, a tone that's very different from the bitterness and the division that too often characterize Washington, D.C." Bush also said her husband had a much greater claim on the education issue than Al Gore did. "George's opponent has been visiting schools lately. And sometimes when he does, he spends the night before at the home of a teacher," Bush said. "Well, George spends every night with a teacher."

A loud cheer for a silent partner
Many Republicans feel that Laura Bush has a lot to teach about being the right kind of first lady. Kate O'Beirne of the National Review heaps praise on her, and has particular admiration for the then-Laura Welch's getting her fianci to promise that she would never have to make a political speech on his behalf. "George Bush made that promise to Laura Welch because the 30-year old school librarian he fell for had no interest in politics, or politicians," O'Beirne writes. "It will be a refreshingly reluctant political spouse at the podium." Not content to take only Hillary Rodham Clinton to task, O'Beirne lumps Tipper Gore into the overreaching wife category, and said a Laura first-ladyship would be a refreshing change. O'Beirne concludes, "Her audience ... should welcome the unassuming normalcy of a wife and mother who prefers a private life to the public spotlight, and who reads books rather than writes them."

An inconvenient woman
Meanwhile, that no-good, book-writing Hillary Clinton was at it again, calling the GOP Convention -- and its inclusion theme -- a cynical sham. According to the New York Post, the Senate candidate ripped the Republicans for their "well-scripted show" and "hollow rhetoric" in a speech before the National Urban League. Clinton said that the Republicans spoke up for racial tolerance while the TV cameras rolled, but "We need to ask, what will you do when the cameras go away? And what did you do before the cameras arrived?" The first lady also took a shot at her opponent, Long Island Rep. Rick Lazio. "He goes around calling himself mainstream," she said. "His bus is mainstream. I guess his service as a deputy whip to [former House speaker] Newt Gingrich is now considered mainstream." Lazio campaign spokesman Michael Marr suggested that the first lady reconsider her strategy. "You'd think she'd figure out by now that New Yorkers are rejecting the constant negativity of her campaign," he said.

Remarks rile Poppa Bush
Hillary isn't the only Clinton Republicans are sick of hearing from. Reuters reports that the elder George Bush wants the president to stop picking on his boy, or else! The former president was especially ruffled by Clinton's recent comments that implied that the Texas governor was a daddy's boy. "Near as I can tell, the message of the Bush campaign is just that, 'I mean how bad could I be? I've been governor of Texas, my daddy was president. I own a baseball team. They like me down there,'" Clinton said. Former president Bush shot back that, though he had previously refrained from discussing the Monica Lewinsky scandal, continued Clinton barbs might inspire him to "get off the reservation." "I'm going to wait a month," Bush said. "If he continues that, I'm going to tell the nation what I think about him as a human being and person."