Helen Wolf runs one of the few remaining sex shops in Giuliani's Manhattan, where her grandmotherly advice is to have fun. 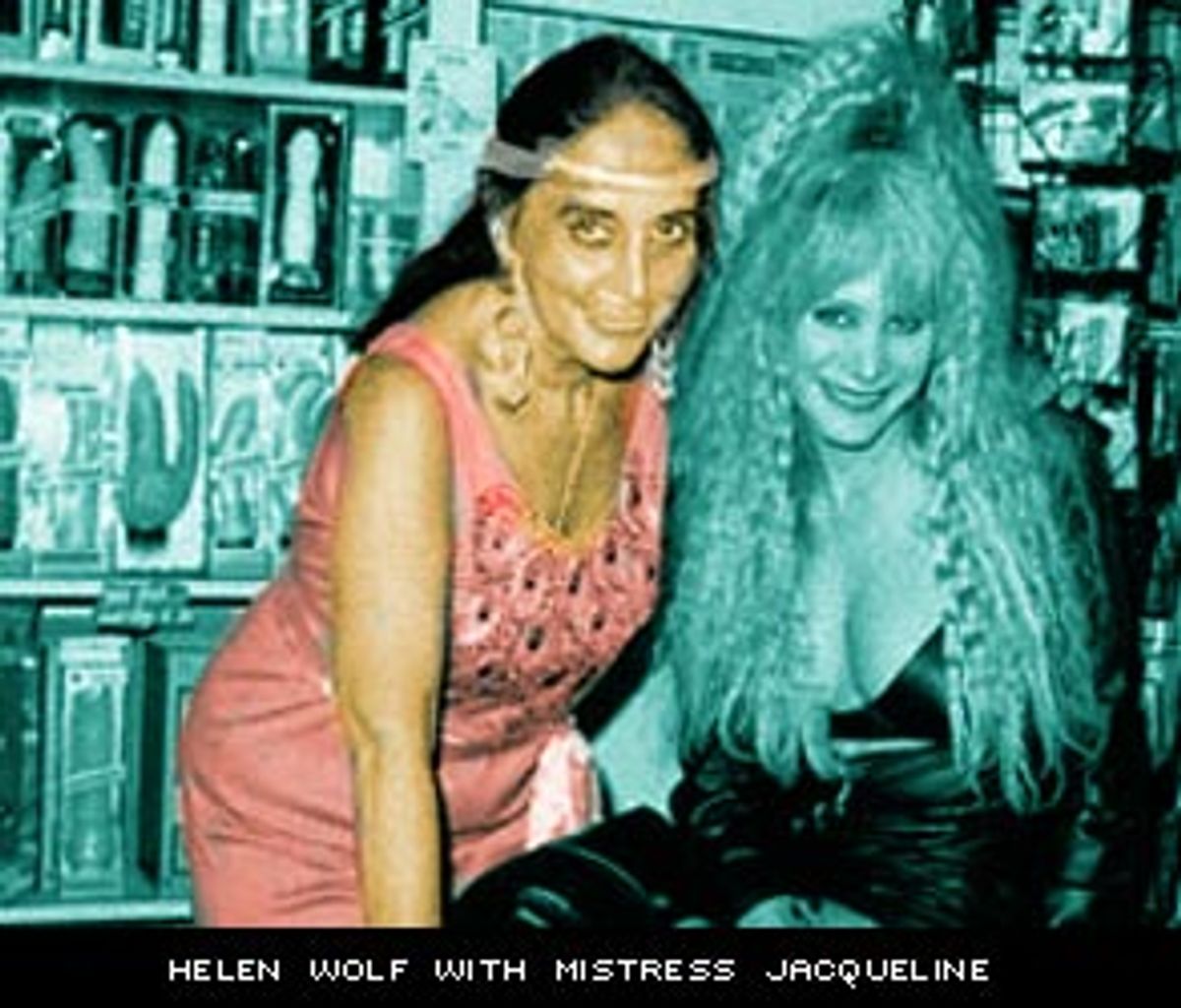 Helen Wolf, a sweet-smiling grandmother, leans over the cash register to show a well-coiffed woman in her 30s how to attach a black dildo to a leather harness. The woman is noticeably more comfortable than when she first walked in moments ago. Nervously surveying the store after entering, the woman approached Wolf and announced, "I need help and I'm so glad you're females here." In just a few minutes, Wolf puts the woman at ease and counsels her on the items she is seeking. Wolf then wraps up the woman's purchase and slips in a free packet of passion fruit-flavored lubricant. As she is leaving, the woman turns to Wolf and says, "This was a pleasure. I will definitely come again."

Come Again is also favored by fetishists because of its wide assortment of bondage and S/M related items, such as leather masks, wrist and ankle cuffs, and various instruments of discipline.

"We have something for everyone," says Wolf. "Except the mayor. We have a mayor that does not believe in sex."

Wolf's dislike for the mayor stems from his "quality of life" campaign which included ridding the city of its strip clubs and sex shops, her very livelihood. Come Again was not affected by the zoning ordinance the mayor used to "clean up New York," but 85 percent of the city's adult businesses were shut down, according to the Times Square Business Improvement District Council.

Fighting to overturn the zoning ordinance along with the ACLU, Feminists for Free Expression and other adult business owners, Wolf pleaded for First Amendment protection at court hearings, community board meetings and to the press. Nevertheless, in February 1998, the New York State Court of Appeals declared the zoning law constitutional. In a press conference on February 24 that year, Mayor Giuliani stated, "This is a major victory for the quality of life of people all across the city, because it will allow people to restore and maintain their neighborhoods, and protect generations of New Yorkers against future encroachment from sex shops and the destabilization they cause."

There are fewer than 20 sex shops and strip clubs operating in New York today. Wolf's shop survived because Come Again, located on East 53rd Street, off First Avenue, is more than 500 feet away from a school or church, thereby falling out of the scope of the zoning ordinance. Also, many of the items in her store are considered novelties and not "sex toys."

Contrary to Giuliani rhetoric, Come Again has so far not "destabilized" its neighborhood, which is in Manhattan's Community Board District 6. According to Carol Pieper, district manager of the community board, there has never been a complaint launched against Wolf's shop. Kevin Ortiz of the Department of Consumer Affairs adds, "Helen runs a quiet shop and she behaves."

Wolf credits the good relationship she has with her neighbors to the relatively demure facade of her shop. There are no garish neon X's flashing in the two small windows that face the living rooms of the apartment complex across the street. A few greeting cards, feather boas and some lacy lingerie are all a passerby will glimpse of Wolf's storefront. Wolf has made a conscious decision to stay out of the way of the mayor and his Office of Midtown Enforcement, an agency that ensures continued compliance with the zoning ordinance.

"I never really had a problem until the Giuliani administration," says Wolf. She sighs and adds, "This city has become less and less sexy."

Although the city's sex appeal may be dwindling, business is up, according to Wolf. She credits the rise in sales to the increased interest in women's sexuality, and not to the current lack of competition in the city, although she says that doesn't hurt business.

"Women have always known that orgasms are important; they're just talking about it more now," says Wolf. "Wait here, let me prove it to you."

She walks behind the counter and pulls out a worn, tan leather case that resembles her skin. As she struggles to lift the case, her muscles tighten under her translucent flesh. Despite her youthful energy, she could very well qualify for Social Security, although she will never tell her age. Wolf opens the case to reveal a mechanical device that resembles a blow dryer with a steel top and plastic handle. She slowly removes the device, leaving the rubbery attachments and thick black coil in the case.

"It's very, very heavy," says Wolf. She laughs and adds, "You could really develop muscles using this thing."

"See here, it promises vigor, health, and beauty," she says and smiles.

Full of ideas on sex and human relations, Wolf says that most of her insight into the subject was gained by talking with customers and not through any formal sex education.

Growing up in the Bronx in an ultra-strict household, Wolf was a virgin when she married her ex-husband. After 18 years of marriage, Wolf says she still knew very little about sex. Following her divorce, she took a sales position at Eve's Garden, one of the first sex shops in New York for women only. She saw it as a rebellious act. She educated herself on the various merchandise, listened to the needs of the customers and started taking notes. Wolf says the store began experiencing financial trouble and she attributed it to the women-only policy. "The problem was that, at that time, women didn't make enough money to spend on sex toys," she says. "They barely had enough money to get by, so women-only stores were not profitable. I felt that you could still create a women-friendly environment and cater to men. And so I opened Come Again."

The store was not Wolf's first business venture, however. In 1974-'75, Helen ran two swingers clubs in the city. One was located in the basement of a brownstone, complete with pool and sauna. It was an upscale establishment yet she made little money, so she gave up the swinging scene. But by that time, Wolf had established her name in New York's small but close-knit sex industry.

Today, Wolf continues to be a well-known member of the industry, as well as an advocate. Abby Ehmann, editor of Extreme Fetish Magazine and a board member of Feminists for Free Expression, describes Wolf as "eccentric" but an important and vocal member of New York's sex community.

In addition to battling Giuliani over the closing of the city's adult stores and clubs, she has worked with Prostitutes of New York (PONY), an organization that advocates for sex workers. She is also a champion of safe sex and frequently dispenses condoms, lubricant and advice at sex conventions, workshops and to her customers.

When asked for pearls of wisdom on sex, Wolf says, "I tell people the same thing I told my two daughters when they were growing up: Use protection and do it because you want to do it. And of course, have fun."

Marisa Kakoulas is a New York writer and attorney. She recently completed her tour of duty at Columbia Graduate School of Journalism.