Why now, after 34 years, is Brian Wilson revisiting "Pet Sounds"? 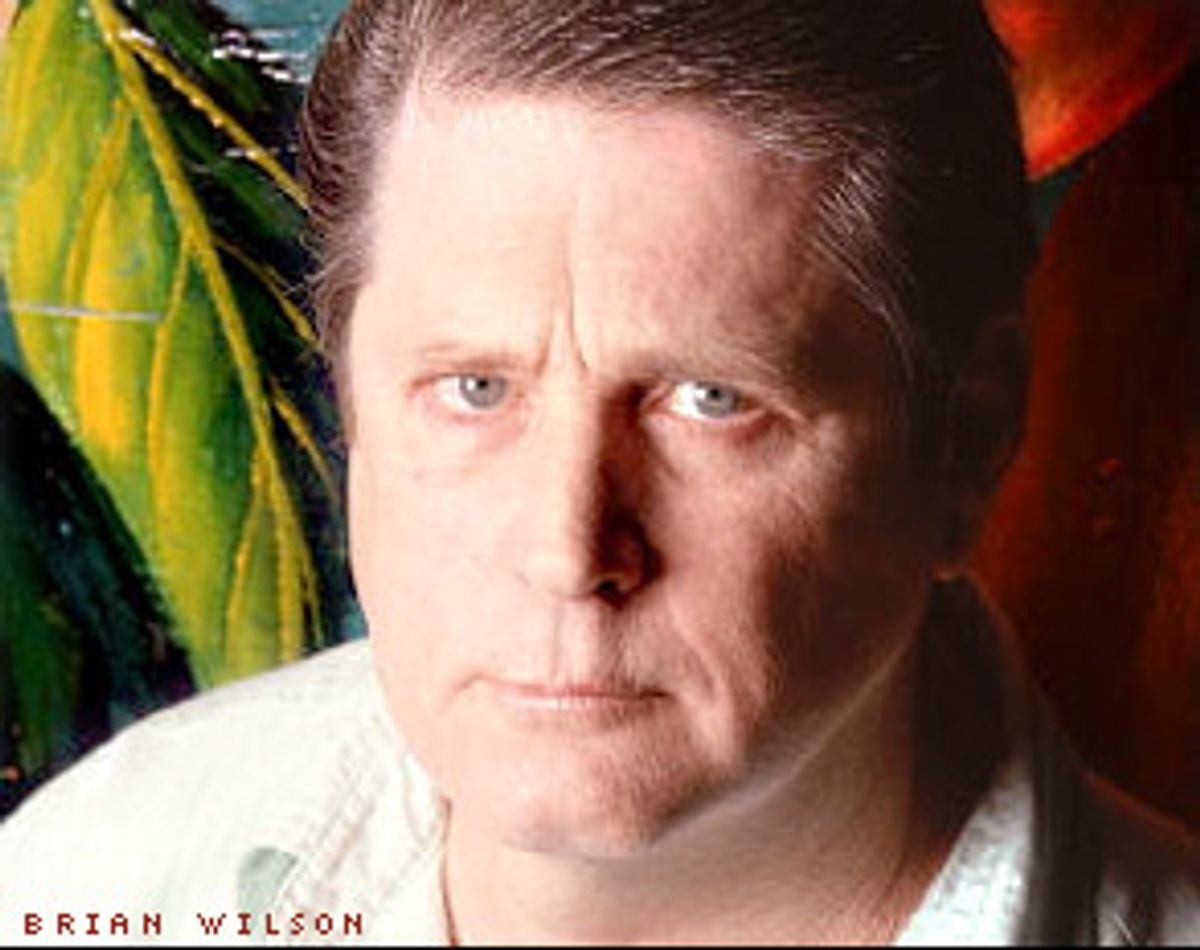 No writer will ever fully understand Brian Wilson. The former Beach Boy is a cagey interview, giving clipped and conflicting answers to questions both pointed and banal. He generally makes it clear to interviewers that he would rather be somewhere else -- and that's when he's feeling good. His state challenges his interpreters to explain what is essentially an unanswerable question, perhaps even for him: Why is Brian Wilson, a man whose fragile emotional condition forced him off the road at 22, touring now to perform the Beach Boys' "Pet Sounds" -- a 34-year-old album considered simultaneously a commercial flop and one of the greatest achievements in all of pop music? Why would it happen now?

Rumor 1: "His wife, Melinda, made him do it." Yes, she's been pushing Wilson to tour. But it's hard to imagine this woman, who by all accounts has created stability for him after he suffered years of neglect and mistreatment, worst of all by his father and then his personal doctor, would want to push her cash-cow husband onto the road against his will. Which leads to the second theory.

Rumor 2: "He's in it for the money." Nope. The right time to tour "Pet Sounds," in business terms, was 1997, when Capitol released its three-disc sessions box set. If Wilson wanted to maximize his tour profits, he would use the Beach Boys name -- which is currently used by a sham nostalgia act fronted by cousin Mike Love and a gang of interlopers -- play just hits and go out with a smaller band.

My theory hinges on the uncharacteristically symbiotic relationship Wilson has with his fans. I think he's doing it because it makes them happy, and at this point, that makes him happy. As evidence, I present a point earlier this summer when Wilson began posting messages on his official Web site.

This wasn't just a greeting or two. In more than a dozen messages, Wilson discussed a range of subjects: the Traveling Wilburys (wouldn't want to join them), bootlegs (stop buying them), the latest Beach Boys lawsuit (don't blindly jump on Mike Love) and confirmed that, yes, a few years ago he met with High Llama Sean O'Hagan ("... a real sweet guy, but I didn't think I needed him to show me how to do the things I had already done 30 years earlier"). Wilson reportedly even telephoned one fan after e-mailing for his phone number.

These initial posts, while fascinating, weren't necessarily a shock. Lots of artists, emboldened by the controlled nature of an online relationship, have used the Net to communicate with fans. The oh-so-Brianlike portion of my story occurs when a fan tried to impersonate Wilson. Whoops. The site administrator temporarily shut down the message board. When it was back up, the pissed-off readers went after the imposter. A guy named Dave ended up apologizing profusely, even confessing that his judgment was clouded by personal problems. Some accepted the apology, others scolded him for driving out their hero. But Brian Wilson wasn't gone.

"Hey Dave," Wilson wrote on the board, "when I get upset or things are goin rough, sometimes I just go in a room put a pillow over my face and scream. It really helps man. You might want to try it. I feel for ya man, so hang in there."

Charmingly heartfelt, slightly out of kilter and completely unguarded, the posting was the kind of thing you might expect from Christina Aguilera's kid sister, not a 58-year-old occupant of the Rock 'n' Roll Hall of Fame. That, however, is why Brian Wilson is so beloved. Those who have remained -- through years of inactivity, Beach Boy feuds, subpar solo productions -- will stick with whatever Wilson chooses.

By touring, his choice appears to be reclaiming his music from Love's never-ending Traveling Medicine Show. This is no small feat. That Brian is the lone living Wilson brother (Dennis drowned in 1983; Carl died of cancer in 1998) is surprising. His decision to spend the summer playing "Pet Sounds" is worthy of the rock history books. This is Syd Barrett putting down his trowel for a "Storytellers" gig or J.D. Salinger calling up Barnes & Noble to ask if they can "throw a little readee-poo together."

Which is why a few loyal fans have had mixed emotions about the tour. It's the unstated compromise we have all made to support Wilson over the years: When he doesn't hit his notes, when his words slur, when he comes off on TV as the ultimate icon of '60s burnout, the loyalists launch into the usual spiel. We talk of the childhood beatings at the hand of his father, Murry, or the breakdown that kept him from touring even at the Beach Boys' peak. There is the time he spent in bed battling drugs, obesity and his own family during the '70s. There is the virtual takeover by Eugene Landy, the disbarred shrink with an eye on the pop charts. There is his overslick second solo album, 1998's "Imagination," the title track a collaboration with a former wrestler (Joe Thomas) and local disc jockey (Steve Dahl).

Finally, we -- the loyalists trying to explain a particular sour note or strange appearance -- get to today's Brian: loving wife, pair of adopted daughters, the right mix of antidepressants. Knowing this heartwarming comeback tale, we demand that outsiders should make just a few allowances. We never think of whether this compromise is fair to our hero, whose greatest works emerged from a thirst for perfection.

The best part of the "Pet Sounds show" -- I caught a performance in Birmingham, Ala. -- is that it usually transcends the trappings of Wilson lore. Sure, there were signs that we weren't watching the greatest showman since James Brown. (He stared at the teleprompter during "California Girls," and he gazed zombielike at the soloists to make sure he started singing again at the right time.) But it was encouraging to see that Wilson seems, on the surface, to be relatively comfortable in front of a crowd. Wearing a crimson 'Bama shirt and blue Vans for the second set, he looked to be on the lighter side of his lifelong weight battle. His stage banter could be stilted but there were moments when his childlike charm came through, especially when he flubbed the start of "The First Time" and asked the band to restart. "Sorry guys," he said, "I was looking at a bug about to go in my eye."

Has he become so self-aware that he, not one of his advisors, decided to play the Barenaked Ladies' tribute song "Brian Wilson"? Probably not. He does sing it beautifully and, as on the Internet-only release "Live at the Roxy," the song glides into a gorgeous, vibraphone-heavy version of "'Til I Die."

Much of the credit should go to his 10-person band, which is a blend of hipsters (Los Angeles' Wondermints) and seasoned studio hands. Paul Mertons, formerly of Poi Dog Pondering, plays flute, clarinet, saxophone and perfectly hit the improvised bass harmonica solo on "I Know There's an Answer." Jeffrey Foskett, a longtime Beach Boys touring guitarist, helps with stage banter and, most importantly, takes over the falsetto parts on a number of songs, including "I Get Around," "California Girls" and "In My Room." Wilson isn't masking his live vocal limitations; he's simply orchestrated a show to fit the band's strengths. This is the very same philosophy that led him to record "Pet Sounds" with the best session players available while the Beach Boys toured the country.

The only way to truly understand the goodwill surrounding these shows is to experience it. Instead of the usual summer rock crowd -- sloppy drunks, chattering spouses, request-shouters (the type that show up at the State Fair Beach Boys revivals) -- the audience emotes the feel of a support group. It is as if we understand that the object of our affection is always going to be a little off, even on his best days. How can we complain? We are watching Brian Wilson perform "Pet Sounds." It is a privilege. The band seems to share in the joy. Instead of Love's bikini-clad, wannabe Hooters girls, the "Pet Sounds" unit includes singers Scott Bennett and Taylor Mills. Without pretense and from the back of the stage, they couldn't resist a slow dance during "Be My Baby."

The real attraction, of course, is the "Pet Sounds" set. It comes after an hourlong Beach Boys sampler that mixes the artsy ("This Whole World," "'Til I Die" and "Add Some Music") with the hits ("California Girls," "Help Me Rhonda" and "I Get Around"). On many dates, Wilson hires a local orchestra to accompany the band and perform an instrumental medley composed by "Smile"-collaborator Van Dyke Parks. Not on this rainy, Alabama night.

After hearing the touring unit play through, it's hard to understand how the orchestra could improve the sound. The album is re-created in full, right down to the bicycle horn honks near the end of "You Still Believe in Me," the theremin during "I Just Wasn't Made For These Times" and the flute riffs on "God Only Knows." The instrumentals were also stunning, in particular the spy mambo of the album's title track. And after "Caroline No," a pre-recorded train rolled through Birmingham to mark the end of "Pet Sounds."

Wilson's biggest flubs came early in his sets, which might explain his chilly performances on Letterman over the years. Maybe he just needs to warm up. On "This Whole World," the second song of the night, Wilson started slightly off key and never corrected himself. The "Pet Sounds" section opened with him missing his cue for "Wouldn't It Be Nice" and coughing his way through the second verse.

But Wilson recovered. On "Don't Talk (Put Your Head on My Shoulder)," he hit each of the high notes, sliding effortlessly into falsetto. He knew how much this meant, jabbing the index finger of his right hand toward the sky with each climbing note.

It was an inspiring moment, but the real test will come this winter, when he has talked of reentering the recording studio. This time around, there won't be any ex-wrestlers, disbarred shrinks or second-rate shock jocks to distract him. There won't be any record company jerks pushing for a hit. Only Wilson and the sort of selfless, multidimensional working unit he hasn't had at his disposal since the "Pet Sounds" days. Who knows what they might create.

Geoff Edgers is a writer at the Raleigh News & Observer and a frequent contributor to Salon.