Trick of the light

Scientists broke the speed of light -- or so we were told. Did the press keep us in the dark, or was it the scientists? 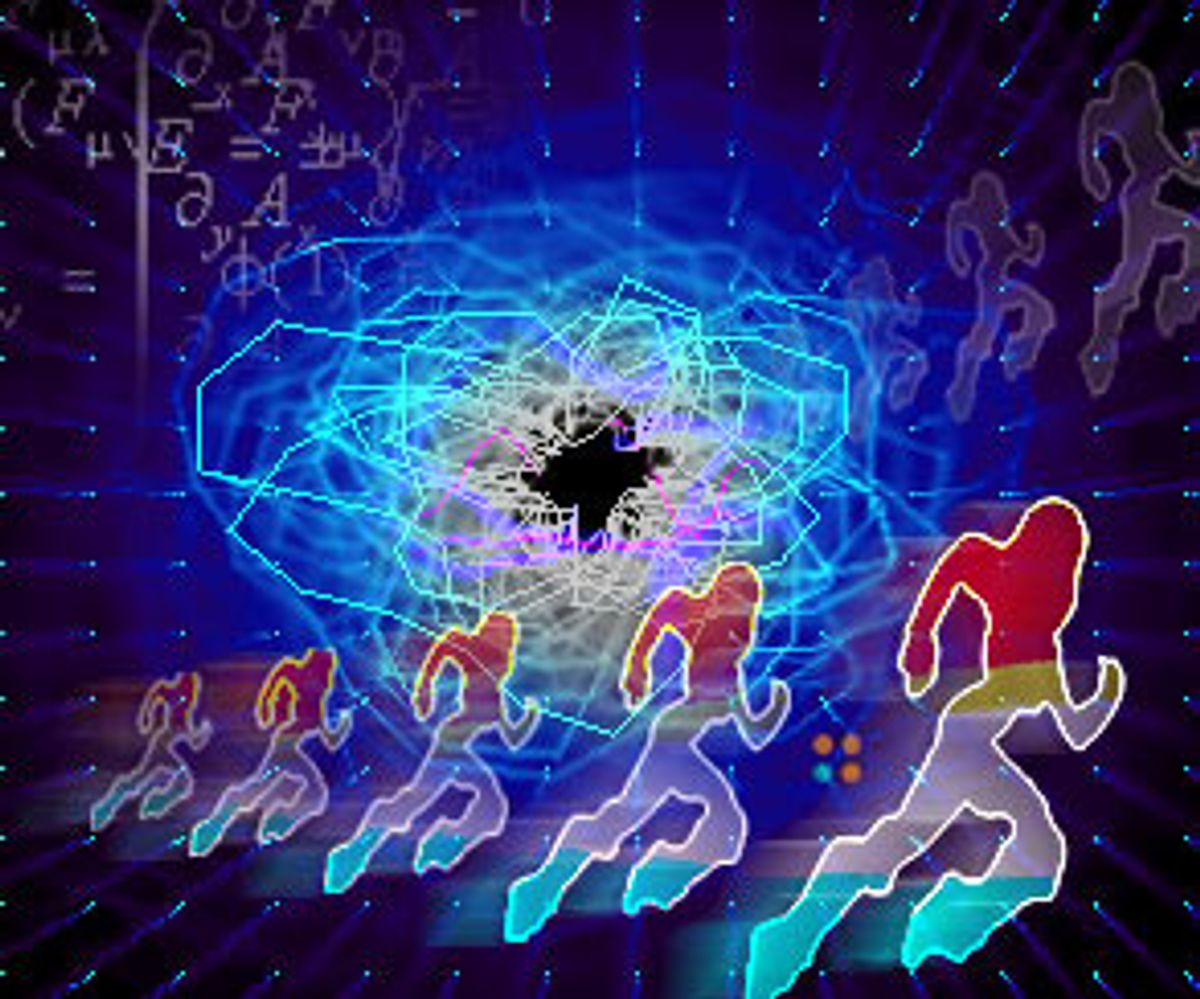 A funny thing happens when you shine a light on certain scientists. Unfamiliar with the complex formulas for fame, the logarithms that ensure one's footing, now and then the underexposed teeter before sudden media attention. Some do not flinch -- your Carl Sagans and your Stephen Hawkings glimmer like test tubes -- and yet when others mix with minor celebrity, weird things happen. Maybe it's just chemistry.

On July 20, most major U.S. newspapers reported that researchers at the NEC Research Institute in New Jersey had coerced a laser into breaking the speed of light. This was front-page news at the Washington Post and other dailies, as it should be: Violating a basic principle of the universe -- one of the few we can all get our minds around -- changes just about everything and chases such news out of the science journals and into the headlines.

And now the chief researcher on the NEC project, Lijun Wang, hangs up on journalists.

Wang's partners, Alexander Kuzmich and Arthur Dogariu, wouldn't comment either, and Dogariu said, "I am not allowed to speak to the press."

Probably, but that's not why they're being snippy. It seems the papers had it wrong: Not only does the speed of light remain unsurpassed, but Wang's experiment wasn't even about that.

What Wang wanted to do -- and succeeded in doing -- was much more banal. Far from challenging fundamental rules of nature, the team developed a method of manipulating the wavelengths of a beam of light, thereby altering the way it arrives at its destination. Because short wavelengths become longer and long ones become shorter, the natural fanning outward that marks a light pulse is eliminated; consequently the shape of the pulse at its destination appears the same as at its origin.

This effect, called anomalous dispersion, had never been produced in a transparent medium. The novelty of the experiment was not in the manipulation of the pulse -- physicists have been doing this for years and long ago observed that a certain band of frequencies within a group of waves can arrive at its destination before the rest, even at a rate greater than the speed of light. No, the novelty lay in the 6-centimeter, cesium-filled, clear chamber that hosted this activity. Historically, anomalous dispersion had only been arranged in opaque media.

This is big news for an institute funded by a major telecommunications company -- improved performance in optical fibers could prove valuable -- but no news at all for the average Post reader.

If the recent drama at the institute (the hostility, the rigid refusal to comment) suggests that some of these scientists have seen "The Insider" too many times, the stakes are indeed high in at least one arena: Everything that comes out of the research facility belongs to NEC USA. NEC USA, in turn, belongs to NEC Corp., a vast Japanese technology corporation that competes with Sony and IBM.

The reporting of Wang's experiment generally included none of this information. Strangely, though, nearly every article included a puzzling assurance from Wang that Einstein had not been refuted in any way. The inclusion of this assurance, however correct, made no sense. No explanations were offered, and readers were left to reconcile this promise with the remainder of the report, which did contradict Einstein.

The Dallas Morning News finally got hip to the error on July 25. Tom Siegfried pointed out that the breaking of the speed of light was both inaccurate and nothing new. As recently as May, Italian researchers claimed to have used a mirror to manipulate the flight of microwaves through empty space. The effect was a slightly faster-than-light speed for the microwaves over distances of 1 to 2 feet. The Italian results were attributable to the same phenomenon seen in New Jersey: The light didn't speed up, but rather the peak of its pulse shifted, thereby changing its intensity.

James Chadi, vice president of the science division at the institute, agreed to talk. Beginning the conversation with the diplomacy of a manager -- he regretted Wang's refusal to comment -- Chadi soon lapsed into an impatience of his own, and would say little about the original newspaper reports.

Between extensive explanations of optic fibers and anomalous dispersion, Chadi sketched a picture of negligent reporters, so zealous, he contended, that they didn't read the researchers' report firsthand (published July 20th in Nature), or even talk to them over the phone (during that window of time when the scientists weren't hanging up).

It's not hard to imagine the eagerness that would guide a newspaper reporter past key details. Splashy, readable science stories arrive once a light-year at best, and when they do, they're corralled onto the front pages in a hurry.

And having imagined this eagerness, one might move on to questions about the state of science in general: Does it suffer the same inattention as the arts, as international news, as women's basketball? Forced to compete with "Survivor" and Puff Daddy, the scientific community must rewrite the universe if it wants to be noticed.

And this might not even sound like overstatement, were it not for the problem of the NEC press release. Issued by the Corporate Communications Division in New York (rather than by the institute itself, in Princeton), the four-paragraph statement begins with a headline that would have any reporter on the phone: "NEC Success in Superluminal Light Propagation Proves Light Can Travel Faster than its Speed in Vacuum."

It was something of a bait-and-switch, except that NEC forgot the switch part. The press release uses the same language that appeared in the papers -- light traveling "faster than its acknowledged speed," etc. It says that the research work "may result in significantly faster information transfer speeds across networks and in computers." This is true, but misleading: The transmission of information could conceivably improve, but it would have the anomalous dispersion, and not a new speed of light, to thank. Information, Wang admits, will never travel faster than the speed of light.

The statement even deploys the same incongruent disclaimer about Einstein: "Despite exceeding the vacuum speed of light, the experiment is not at odds with Einstein's theory of relativity and is explainable by existing physical theory."

In a subsequent interview, Chadi conceded that the press release was overblown.

"This is quite well known," he said of the finding that certain light waves can appear to exceed the speed of light. "The physics here is not new."

Chadi said that the original report was "more carefully written" and contained "no extraneous claims." He would not say why the press release -- to which Wang contributed -- came out so differently. He would not comment on whether there was pressure to make headlines from NEC, which posted a profit of $101 million in fiscal year 2000, following heavy losses the previous year.

Wang has a right to be mad at the mainstream press. Not only did it take him away from his research long enough to correct all the erroneous reporting, but it forced him to issue a possibly frustrating correction: The real findings had nothing to do with revising a fundamental law of physics, and for that he should never have made the papers in the first place.

This is speculation; Wang's not talking. But all the recent wrangling in his life exposes a few facts about science and the media that are hard to miss: Standard science articles are legless. People resist slogging through the dryness because there's no payoff -- every single story ends the same: Maybe. Maybe we'll walk on Mars, maybe our cars will run on algae, maybe time travel awaits us in the future. "Maybe" is a lousy kicker and our eyes glaze.

And in these same publications, nothing plays like a gadget story. People step into traffic reading about robots that can fry eggs, and the gleam on the chrome must lead the occasional theoretical physicist to avert his eyes -- or get carried away hyping his own work.

Monday's Los Angeles Times, for example, ran a 1,418-word tech story on the new toys we can get for our cars. DVDs, video games, flash memory cards, computerized address books -- the article was undeniably more compelling than an explanation of anomalous dispersion in light pulses.

Articles like these know what we want done with Scientific American and other monthly deserts: We want the science part forwarded to the development people, who do the understanding and walk away with an actual device -- hand-held, if possible.

Between the torturous science article and the showy gadget log opens a chasm the size of a universe, a chasm so wide even light -- traveling at light-speed, no less -- can barely make its way across. When it does arrive, all bluster and vim, we remind ourselves to mention it at a party that night, but pretty much live our lives unshaken.

Anomalous dispersion in a transparent medium will never grab imaginations like the latest talking car. Abstractly, we may like the idea of science without application -- it's like a person taking a walk but not buying anything -- but in practice, we demand material consequence of our scientists. They can keep their pursuit of knowledge to themselves; we want flying cars, Einstein spanked. If the beaker doesn't explode bright red when you add the powder, why bother adding the powder?

And so finally, because there is only one solution, and one way to conclude this article: The truth, as told by Lijun Wang, Arthur Dogariu and Alexander Kuzmich in their Nature article. Follow the link, which moves just under the speed of light. This what we should've read all along -- the original report, unstrained by the tug of newsprint. It's no fun to read, but it's science.