A kinder, gentler Papa Smurf tries to reach out to those left out, laments the failed potential of President Clinton and knocks Al Gore upside the head. 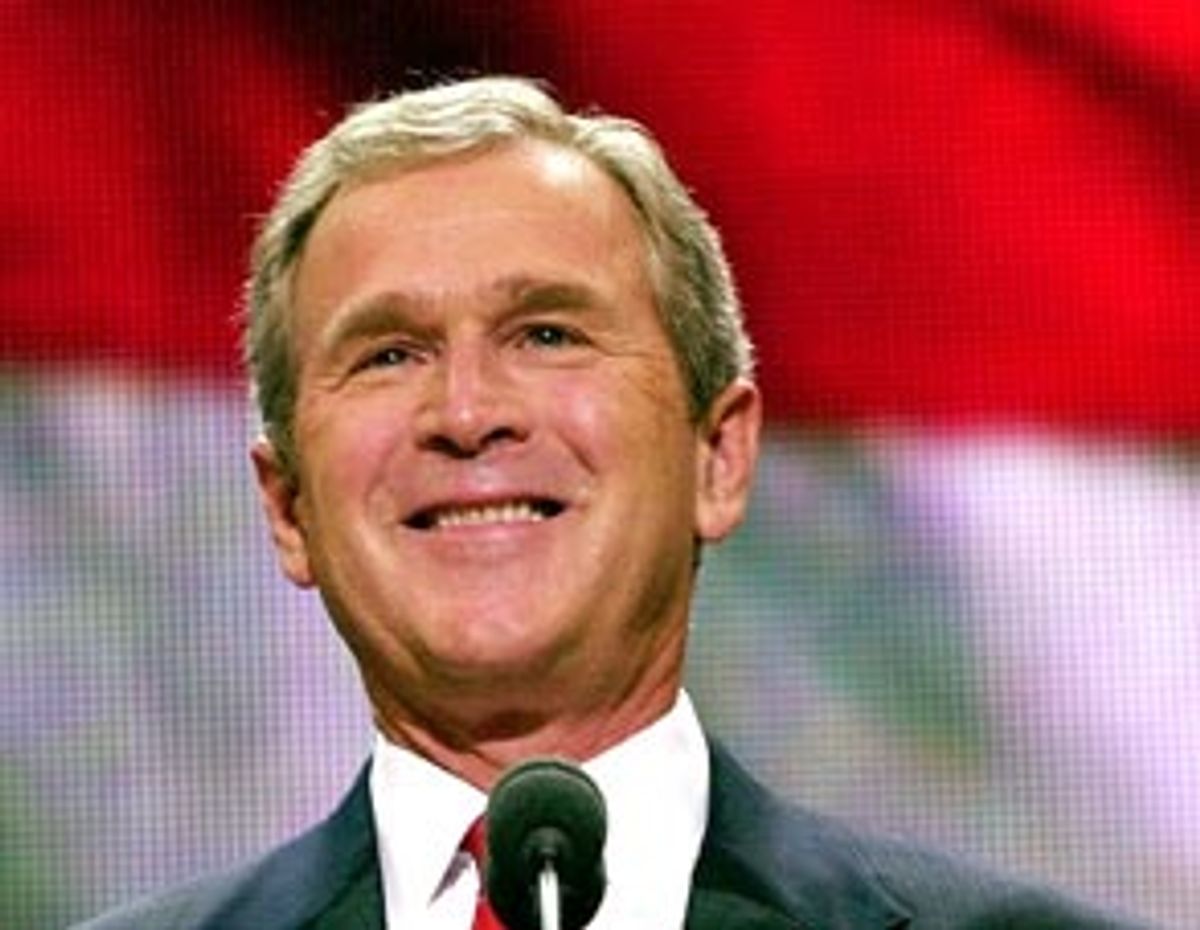 Though the convention halls were filled with second- and third-tier celebrities like the Rock, Ted Nugent and Ben Stein, it was Gov. George W. Bush who was the real superstar here, on the closing night of the Republican Convention. All the more so after feeding the crowd an image of himself as a man of both steely conviction and open love -- kind of like a yuppie Papa Smurf.

Slamming the Clinton-Gore administration for a lack of ethics, for squandering American world leadership, as well as wasting opportunities to reform the Social Security and educational systems, Bush promised the salivating crowd that "we can begin again."

Somewhat strangely, he said that prosperity "can be a tool in our hands ... or it can be a drug in our system -- dulling our sense of urgency, of empathy, of duty."

Prosperity may well be a drug, but it's one every president has pushed on the country whenever possible -- and the reference called to mind Bush's own remarkable campaign-trail promise that he hasn't used drugs ... at least in the last 25 years.

Throughout the four-day convention, the rougher edges of the GOP and Bush's politics have been largely relegated to the sidelines, and Thursday night's 53-minute oration was no exception. Bush -- the man repeatedly slammed for appearing at Bob Jones University and for never expending one iota of political capital to condemn any of his various racist allies -- painted himself as a racial healer.

He said that racial progress "is still too slow." He used "We shall overcome" as an applause line. He called for after-school programs that teach that "bigotry disfigures the heart."

In perhaps the most moving moment of his speech, Bush recalled a visit to a juvenile prison where a teenage African-American boy asked him, "What do you think of me?" Somewhat boldly, Bush said he interpreted this to mean, in part, "Do you, a white man in a suit, really care what happens to me?"

In keeping with his billing as a "new kind of Republican," Bush -- instead of denigrating the poor -- expressed understanding of them. "Children without fathers in neighborhoods where gangs seem like friendship, where drugs promise peace and where sex, sadly, seems like the closest thing to belonging -- we are their country, too," he said.

He made his share of new-Republican promises. Head Start -- a program that his running mate, Dick Cheney, voted against funding while in Congress -- should be made "an early learning program," Bush said. In fact, kids and children were mentioned 18 times; "the unborn" only once. And even then, he allowed that "good people disagree on this issue," an observation that was rejected by the GOP platform committee.

Between the lines of his exhortations lay his conservative views. The plethora of gun shootings in the country was the fault of a failure to "finally and strictly enforc(e) our nation's gun laws." The one specific tax rate he called to lower was the bottom one, from 15 percent to 10 percent. Though "every bracket" would see a lowering, he noted -- not quite acknowledging that 60 percent of the cash in his tax cut proposal would go towards the richest 10 percent of the country.

And while making implicit sneering barbs at the Lewinsky scandal -- for having "disillusioned" children -- Bush tried to act as if he hadn't had a horse in the impeachment mess. "I don't have enemies to fight," he said. "And I have no stake in the bitter arguments of the last few years. I want to change the tone of Washington to one of civility and respect."

Bush spoke of himself as "optimistic, impatient with pretense," being able to work with Democrats, as an individual who "believes that leadership is a process of addition, not an act of division."

"I will not attack a part of this country, because I want to lead the whole of it," he said.

Bush then attacked a part of this country -- a small part, granted, just two guys -- Clinton and Gore. "They had their chance," he said of the two. "They have not led. We will."

Significantly, he discussed the two men in markedly different ways.

Clinton was the man of failed potential. "So many talents," Bush said. "So much charm. Such great skill. But in the end, to what end?"

Gore, conversely, was portrayed as an attack-dog hack, with an "outlook typical of many in Washington -- always seeing the tunnel at the end of the light." Revealing the nastiness he reserves for those who stand in his way, Bush mocked Gore's rhetorical attacks of Bush's "risky tax scheme." He belittled Gore's "politics of the roadblock, the philosophy of the stop sign."

"I do not reinvent myself at every turn," he said.

Generally, however, Bush kept it as clean and lofty as a Space Shuttle sink, borrowing much more language from George McGovern than George Wallace.

After showing a video clip that included Ronald Reagan's famous call ("Mr. Gorbachev, tear down that wall!"), Bush painted a picture of another wall. On one side was wealth, technology, education and ambition; on the other, poverty, prison, addiction and despair.

"And, my fellow Americans," Bush said. "We must tear down that wall."

That would be done, he said, not only by reforming education -- through vouchers, though he never mentioned the divisive "V" word -- but by promoting faith-based charities and preaching abstinence.

Bush even touched a bit on his deeply personal reasons for his faith in faith. "At times we lost our way," he said of his generation. "But we are coming home." Toward the end of the speech, he preached that he believes "in grace, because I have seen it; in peace because I have felt it; in forgiveness, because I have needed it."

Other issues were touched, of course -- Medicare, low-income housing, and Social Security. It all sounded very, very nicey-nice. But words are not deeds, and of course the Gore campaign sent out a press release not even 20 minutes into the speech pointing out that Bush has yet to lay out a Medicare plan. In Texas, the housing department under Bush has been disastrous. And there are details in Bush's plans that even he doesn't deny will cut Social Security benefits for future recipients.

Bush wants to keep the rest of the election this pretty. And if he can, he'll win. But he can't. There's a record that shows Gore will attack, and he should attack. And when that happens -- no matter how preordained Bush's inauguration seems right now -- his popularity will fade. It's the beginning of the school year right now, and Bush is pledging: "This year's gonna be different! I'm going to be nice to everyone! I'm going to be the person I want to be!"

But reality always intrudes, doesn't it? According to a SpeakOut.com tracking poll of 450 voters, though Bush's speech was received fairly well, every time he bashed Gore, voters were turned off. So why did he do it? Because he's savvy, and he knows that he has to.

He has to slam Gore, because internal polls are telling him that this is still up for grabs, appearances to the contrary. Bush might win, but as even he acknowledged tonight, "this will be a tough race, down to the wire."