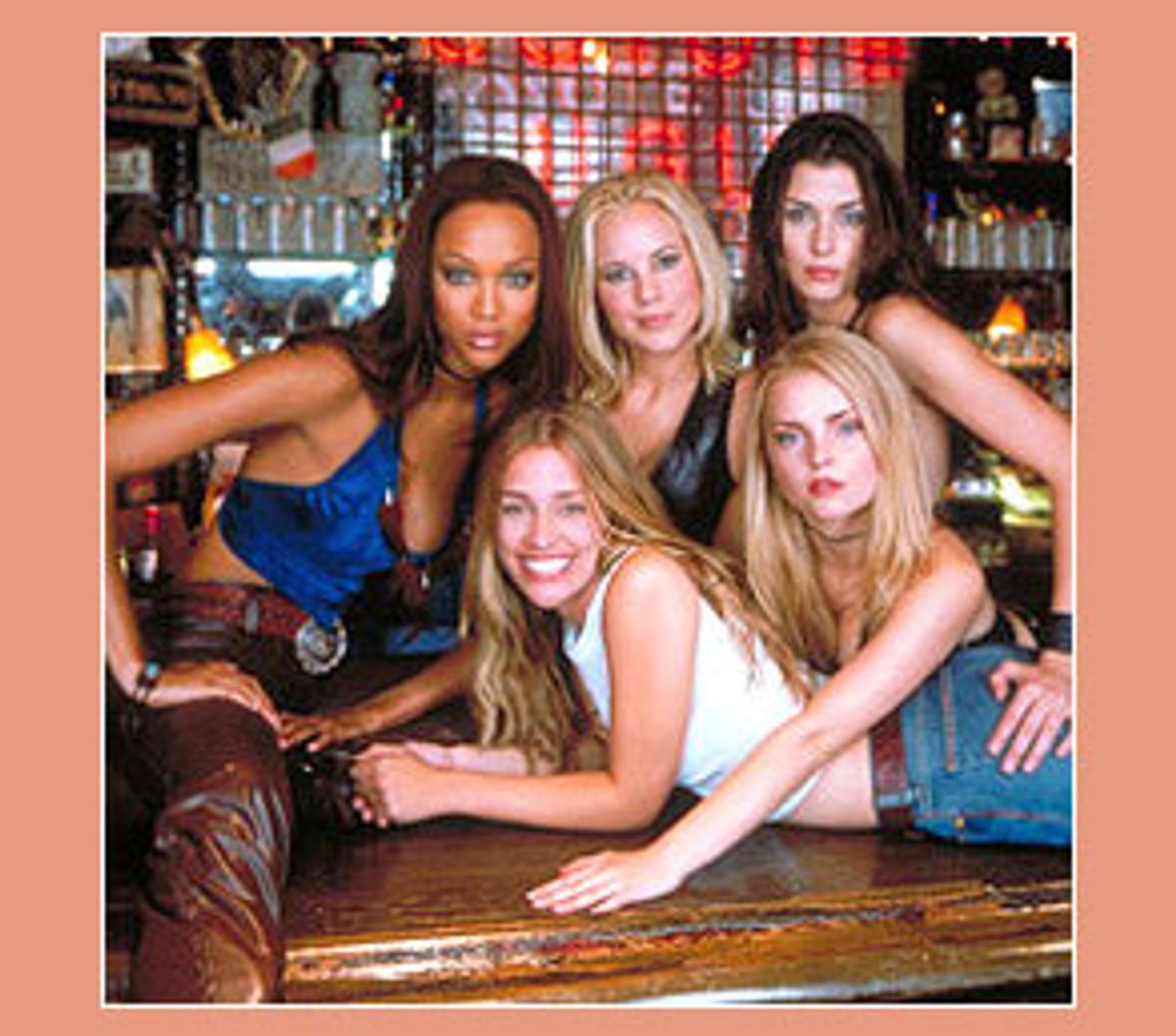 If you're planning to see the Jerry Bruckheimer-produced "Coyote Ugly" just to get an eyeful of leggy beauties dancing across a whiskey-slick bartop, you should know that this is really a prudish, glassy-eyed movie about dreams coming true in the heart of the cold, cold city. Really. In that sense, "Coyote Ugly" may be the most disappointing movie of the summer: I went in hoping for shameless exploitation and all I got was a handful of crappy Diane Warren songs. It just doesn't get grimmer than that.

Lissome young Violet (Piper Perabo) has left her home in suburban New Jersey to try to make it in New York as a songwriter. She's too frightened to sing, but boy, can she write. The only problem is, she's broke. A chance encounter leads her to a pseudo-Western bar called Coyote Ugly, where the great-looking female bartenders (Bridget Moynihan, Izabella Miko and Tyra Banks) hop up on the bar and dance, in a mildly raunchy manner, for the customers whenever the spirit moves them. Their moves are mostly along the lines of country line dancing, although they do make it a point to wear skimpy tops and tight pants.) Soon enough, Violet takes a job. She feels awkward at first, but soon she gets the hang of it. Later, her stage fright is cured.

Somewhere in there she meets a nice Australian boy (Adam Garcia) and survives a crisis with her father (John Goodman). But in between, there isn't nearly enough dancing on that bartop, even though ostensibly, that's what we've dragged ourselves into the theater to see. Sure, the women talk about dancing, about how in control they are, about how much fun they have, about how much money they make. But there isn't even a whole lot of plain meat-and-potatoes gyrating. (That's because the picture is rated PG-13. But doesn't that kind of defeat the purpose?) When the women finally do get up to dance, it's mostly a melee of legs, cut so fast that you're not sure whom they belong to (not such a mystery when you look deep down in the bowels of the credits and see that all the women had dance doubles). Even with the ringers, the dancing isn't particularly salacious, nor is it even saucy or entertaining.

What's worse is that "Coyote Ugly" tries to be progressive in the way that Paul Verhoeven's "Showgirls," thankfully, wasn't. That movie was so nakedly honest about its outer-stratosphere level of exploitation that it ended up coming off as almost comically innocent. In "Coyote Ugly," there's clearly some kind of wobbly empowerment message being telegraphed, but it's so damn encoded that I couldn't crack it. Once in a while there's a moment of clarity. When we (and Violet) get our first glimpse of the Coyote girls, they've gathered for an after-work breakfast at a greasy spoon. Laughing and brandishing an issue of "Playboy," they're waving wads of cash around and placing bets on the playmate of the month's favorite movie. It's a nice touch. It's supposed to signal how unashamed they are of what they do, but it actually does a pretty good job of showing us the pleasure they take in their own sexiness and in that of other women. It's also an acknowledgement of the kind of game-playing that's involved in projecting sex appeal.

But despite the women's freewheeling giddiness about their line of work, Coyote Ugly the bar doesn't look like much fun at all. Run by Lil (Maria Bello), a 40ish tough talker who's like Mae West crossed with Debbie Harry, it's the kind of citified place where overgrown urban frat boys get to pretend they're actual rednecks, where they can hoot and holler and get beer sprayed all over them. Cheers fill the air when the Charlie Daniels Band's "The Devil Went Down to Georgia" comes on the jukebox -- it's like a Disney World redneck bar, akin to those European locales at Epcot that have been re-created so one doesn't have to deal with the messiness of plane travel and actual foreigners.

Director David McNally, in his feature debut, tries very hard not to make the goings-on at Coyote Ugly look like exploitation -- though why any woman would want to dance on a bartop when the patrons are free to grope and grab and the bouncers are nowhere in sight is beyond me. And there's something more than a little schizophrenic about a picture that first asks you to believe that these women are empowering themselves (and personally, I'd make the argument that they are), only to have one of them quit in large part because her father and her boyfriend disapprove. Beneath the supposed progressiveness of "Coyote Ugly" lurks a weirdly judgmental message.

But then, I didn't go to "Coyote Ugly" looking for logic; I went looking for hot booty action, and I guess I'm disgruntled that I didn't get much. There are a few bright spots. John Goodman is lovely as Violet's turnpike-tollbooth employee dad. He uses his jolly, deadpan wit to make even the dumbest stock lines funny: When Violet calls to check up on him, he reassures her he's eating a Lean Cuisine dinner when really he's about to plunge his meaty hand into a tub of fried chicken. Melanie Lynskey ("Heavenly Creatures"), as Violet's Jersey-girl pal Gloria, is like a bridge-and-tunnel Betty Boop, full of google-eyed charm (and if there's ever going to be a movie about Monica Lewinsky, Lynskey is the actress for the role). Decked out for her tacky wedding, she smiles cherubically when Violet tells her the groom seems nice, replying brightly, "I think he's the perfect choice for my first marriage!"

But the rest of the characters, especially the leads, don't seem to be sure what movie they're in. Banks, who, in the kind of TV appearances and interviews that supermodels make always comes off as entertainingly boisterous and likable, gets a total of about five minutes of screen time here (her character has quit the bar to go to law school). When we first see her, doing a spontaneous shimmy in that coffee shop, "Coyote Ugly" springs to life for a few moments. As for the other Coyote women, Miko and Moynahan, screenwriter Gina Wendkos hasn't given them parts so much as templates. One has a hot temper; the other is a flirtatious gigglepot; they might as well be the Spice Girls.

As Violet's love interest, Garcia (who resembles a young John Travolta) is reasonably appealing, but he doesn't have enough spark to carry both himself and Perabo. It would take a truly ironclad actress to play Violet with any dignity, and Perabo just can't manage. As her character's written, Violet is supposed to be a mix of innocence and innate smarts: She calms a riot in the bar (in which one of the dancers is dragged away, looking distressed, by a group of sailors) by picking up a mike and singing along with the jukebox. The patrons suddenly turn their attention to her like sleepy snakes, all the testosterone wheedled out of them by her rousing rendition of Blondie's "One Way or Another." (Works in every bar I've ever been to.) Other times, she's retreating to the rooftop of her rundown apartment building, twiddling with her keyboard and warbling her putrid little songs, for which scary middlebrow songmeister Warren alone must take the blame.

Yet not even those songs can distract us from the fact that there's just not a real character behind those lanky blond locks. Worse, Perabo is sorely in need of a vocal coach: Her speaking voice has a brittle, unpleasant edge to it. Giving Violet better material to sing, or better dialogue, might not have been enough to save "Coyote Ugly." But making it trashier just might have done the trick, and it also would have resulted in a much more honest movie. As it is, beneath its veneer of good-timey harmlessness, the picture makes a distressing assertion: It's perfectly OK to use your sex appeal to make money, but of course, if possible, it's preferable to make an "honest" living writing terrible songs. Even as an alleged entertainment, "Coyote Ugly" is a weaselly little thing.