Paul Verhoeven churns out a feast of breasts and gore. I haven't had a worse time at the movies this summer. 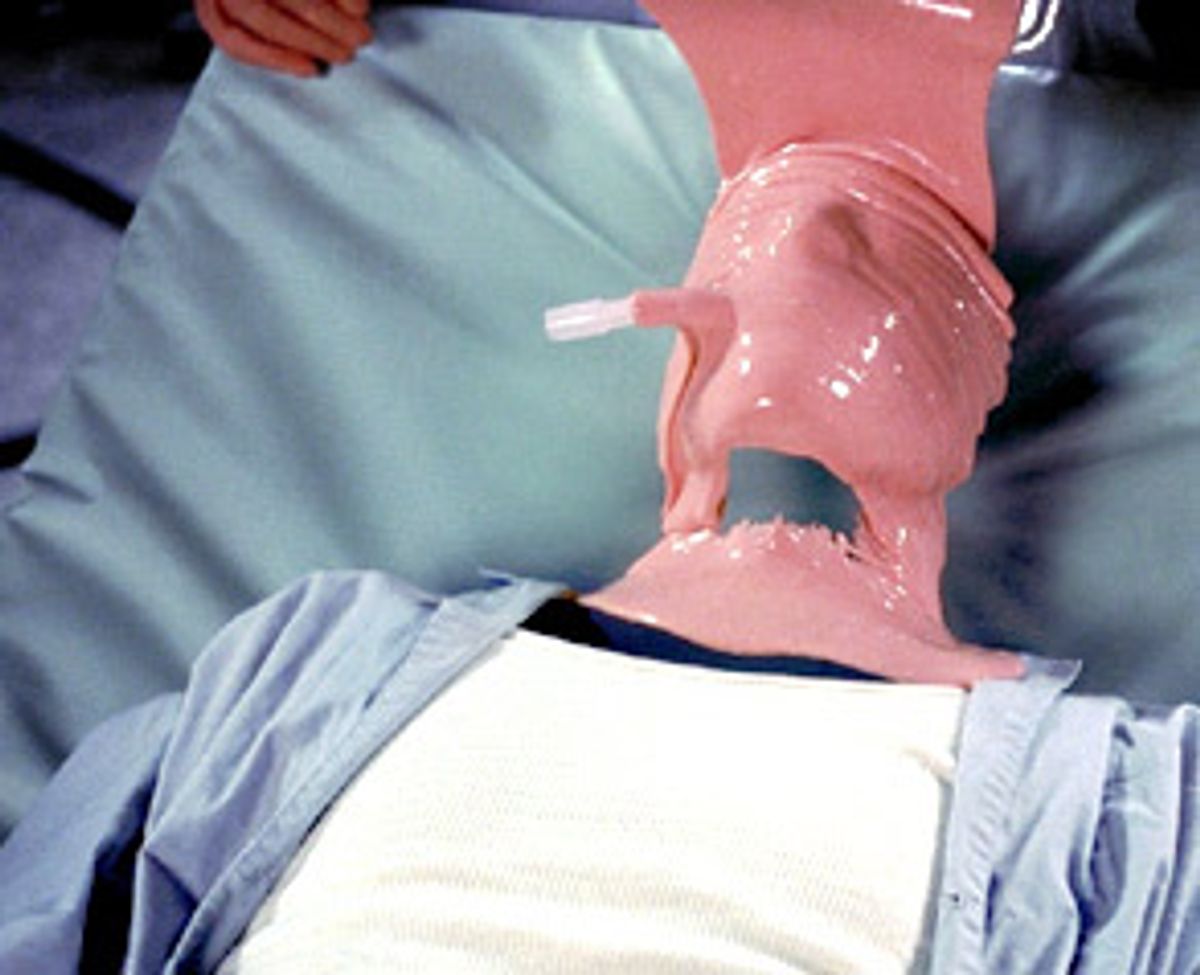 There are two types of Paul Verhoeven movies: the ones that provide a trashy, semi-pornographic good time, like "The Fourth Man," "Basic Instinct" and "Showgirls," and the ones like "Starship Troopers" or "Total Recall" that, as Terrence Rafferty said in his review of the latter, leave you feeling "as if the life had been pounded out of you, and you never want to go to the movies again."

Verhoeven's latest picture, "Hollow Man," doesn't fully reach that point until the last half hour or so (though there's plenty of unpleasantness beforehand), but when it does it reaches it with a vengeance. Here's a statement you won't see quoted in the ads: I haven't had a worse time at the movies this summer.

Like the ability to stop time in Nicholson Baker's novel "The Fermata," invisibility is a natural springboard for a great dirty joke, a chance to indulge the sort of voyeuristic sex fantasies that Verhoeven has never been able to resist. (Let's face it, if most of us could stop time, we'd rob a bank. And if most of us could be invisible, we'd be peepers.) At the beginning of "Hollow Man," when Kevin Bacon's driven scientist gazes hungrily out his apartment window at his pulchritudinous neighbor -- who, of course, obliges by stripping in front of fully lit windows -- Verhoeven is winking at the audience like a carny barker providing a tease and promising to deliver the full goods later on. He does, but repellently. There's nothing wrong with a filmmaker who's an honest whore, but Verhoeven's ministrations have become cruder and more mechanical with each picture. In his earlier films, you could feel his naughty-boy thrill at shocking the audience. Now he shows the audience a practiced old tart's contempt for those who avail themselves of his services.

The movie proceeds by the hoariest sci-fi clichis. The Pentagon bigwigs funding Bacon's invisibility project demand results, so, without their knowledge, he volunteers to be its next subject, announcing to his co-workers, "You don't make history by following the rules. You make history by seizing the moment." I giggled at that, but I don't think Verhoeven intends it to be funny. The exposition scenes are numbingly square because Verhoeven can't wait to get to the sex and gore shock scenes.

The descendants of Dr. Frankenstein who people sci-fi and horror films have traditionally been good men driven mad by their quest for knowledge. Perhaps Verhoeven thinks he's reversing a namby-pamby clichi by making Bacon's Sebastian Caine an unscrupulous bastard from the start. But dramatically it's a miscalculation. There's no suspense in watching a worm become a prick. And there's nothing to care about either. Sebastian delights in tormenting the veterinarian (Kim Dickens) who's been assigned to monitor the animals he experiments on. "Hollow Man" signals its intentions so obviously that the vet and the beasts might as well have red bulls-eyes on their heads. When we find out Bacon's second-in-command (Elisabeth Shue), who's also his ex, is keeping her involvement with another scientist (Josh Brolin) on the project secret, we've got a pretty fair idea they're not safe either.

For someone who's essentially a slick, clever exploitation filmmaker, Verhoeven gets taken awfully seriously. Artforum selected "Starship Troopers" as one of the greatest artistic achievements of the '90s, and the magazine recently conducted a respectful interview with the director. Earlier this week, Salon ran an essay by my colleague Andrew O'Hehir praising Verhoeven's career as a study in "ambivalence." The sex and violence he loads his movies with, Verhoeven is quoted as saying, is essentially no nastier than the secret tastes of a century that showed the Nazis as one extreme of human possibility. You've got to hand it to Verhoeven; as sleazemeister rationales go, that's one of the fanciest.

In "Hollow Man," as in "Starship Troopers," Verhoeven's "ambivalence" is the classic old exploitation technique of pretending to condemn the things you serve up to titillate the audience. He opens the movie by showing a rat being bitten into a bloody mess. Then he follows that with a procedure to make an ape visible that features the tormented animal (visible only by the straining outline of its veins and muscles) nearly dying of cardiac arrest. Ah, but you see, this is only to show us how the scientists' pursuit of their goal has deadened them to suffering. So whose sensibility has been deadened later on, after Bacon has already proven himself a maniac, and we're shown (via heat-sensitive photography) him bashing a dog's brains out?

Verhoeven's, of course. (Maybe I'm sentimental about animals, but harming a defenseless creature who has no idea what's going on is just about the lowest a filmmaker can sink to provoke an audience reaction.) Chiding an audience for the reactions you've elicited is always a chancy proposition. Hitchcock pulled it off time and time again (especially in "Rear Window," the whole point of which is to make us realize the ramifications of voyeurism). But you have to have some purpose beyond a special-effects spook show if you're going to ask an audience to be ashamed of what you've provided for their delectation. You have to give the audience some emotional stake in the characters. And you certainly need better lines than ones like, "I'm tired of all this sneaking around, Lisa. You're going to have to tell him eventually." Verhoeven's instinct for shocking the audience has gotten coarser and uglier from picture to picture. Essentially, in "Hollow Man," he's asking us to be ashamed that he's lost his taste, style and wit.

The sexual side of the movie is especially ugly. Verhoeven has sometimes been accused of being a misogynist when he doesn't deserve it. But here, as in "Total Recall," his idea of treating the female characters equally is to have them beaten up as badly as the men. I resented seeing Shue, whose sunny skepticism is nearly the one human element in the movie, getting bashed bloody. And Verhoeven's contempt for Kim Dickens, whose anger at Bacon translates as resentment at being stuck in this crappy picture, is almost equal to his invisible maniac. Dickens is the object of Bacon's first bit of invisible shenanigans. (He unbuttons her shirt and caresses her breast as she dozes.)

The scene is another example of how Verhoeven wants to play it both ways. By de-eroticizing the sexual scenes, by making them as ugly as possible, he can claim a higher purpose than if he'd given us the promised adolescent sex fantasies of the opening and shown Bacon using his invisibility to satisfy the male desire to gawk at naked women. But what's wrong with providing enjoyable sex fantasies? There's nothing inherently hostile about the urge to peep. (It's not threatening in Woody Allen's "Alice" when Joe Mategna uses his invisibility to sneak into Elle McPherson's dressing room.) All Verhoeven has done is to add an element of real hostility to scenes that could have been amusing turn-ons.

If his aim is to address misogyny as an element of power, then why does he cop out in the movie's ugliest scene, when Bacon enters the apartment of the neighbor he's been peeping on. Since it ends with the screaming woman being thrown down on the bed, it's safe to assume that Bacon rapes her. Who'd want to watch that? But by cutting away at that point, Verhoeven can provide the titillation and avoid the nastiness of its logical conclusion. He doesn't show us the rape, so he can deny that one takes place.

Some of the effects here are nifty, like the invisibility process that strips the subjects layer by layer so they look rather like those 3-D models from the '60s. ("The Visible Man," I think they were called.) But mostly, "Hollow Man" is a miserable experience. I've had more than my fill of pulp that tries to justify its brutality by telling us it's reflecting the hidden darkness inside us all. There are probably plenty of moviegoers willing to be up-front about their taste for disreputable sexy, violent entertainment. Verhoeven may be right that we all carry a hidden darkness inside of us. Personally, mine comes out when I'm promised a good time and wind up getting the hell beaten out of me.