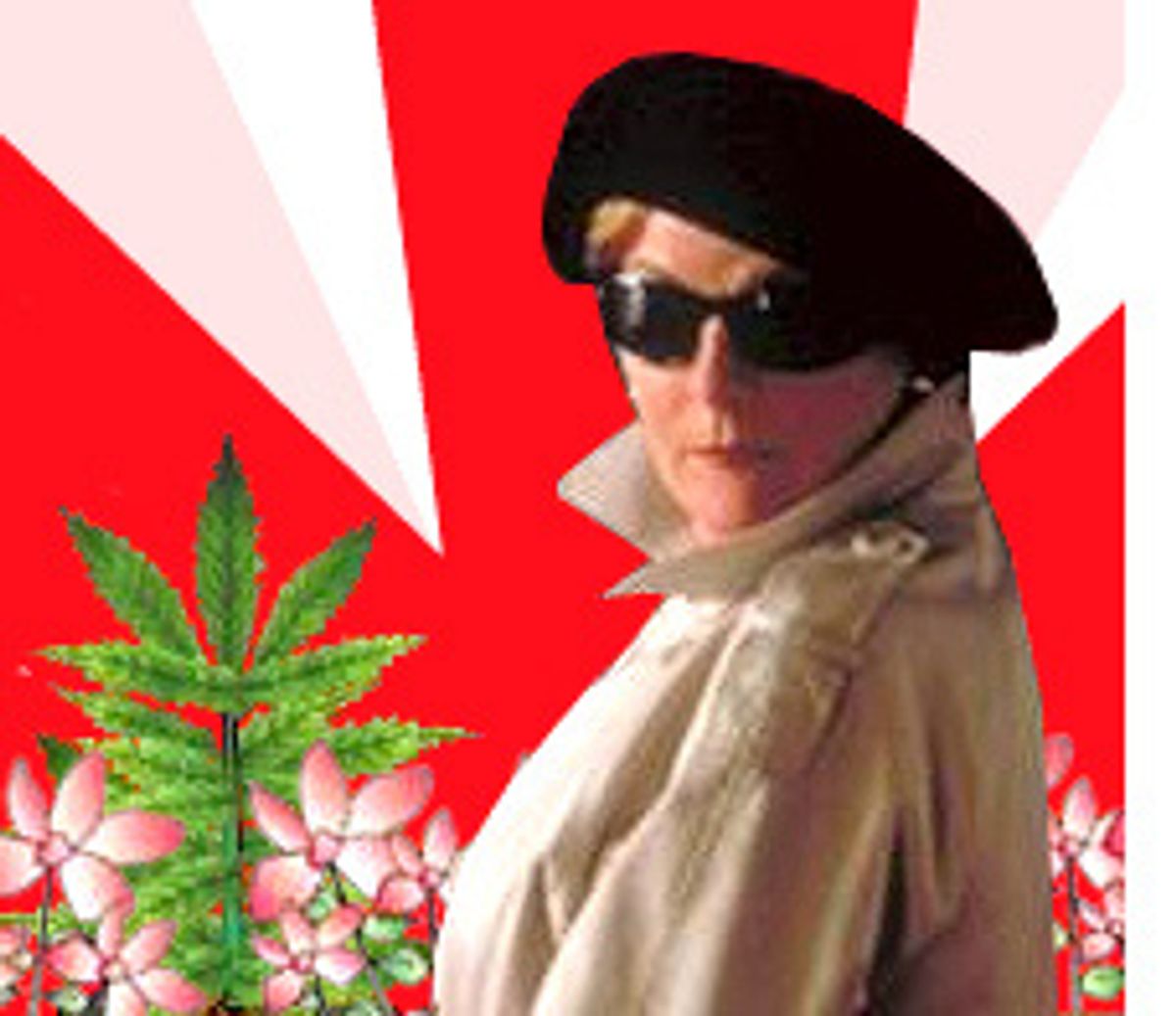 In purely conceptual terms, there's nothing less funny than the idea of straitlaced old people getting high. It's the kind of joke that was tired even in the '70s, when you'd see oldsters trying to swing with the young 'uns in bad TV sitcoms. But Nigel Cole's "Saving Grace," about a proper country Englishwoman who turns to growing marijuana in order to save her family home, manages to sidestep most of the obvious pitfalls. It's a breezy and entertaining little charmer that works because it's not rendered on too precious a scale. Even though it's set in Cornwall, the perfect picture of ruggedly gorgeous English coastal beauty, it's less like a ditsy country print than a happy tropical floral.

Shortly after Grace (Brenda Blethyn) buries her husband, she learns he's left her with a mountain of debt as the result of secret business dealings gone bad. (He's also dallied with a mistress named Honey.) Grace keeps her cool when her husband's creditors start showing up to remove the furnishings from her rambling house, but it's clear her situation is dire. When her groundskeeper Matthew (Craig Ferguson), whom she can no longer afford to pay, asks her to have a look at the limp and ailing marijuana plants he's raising in secret, she immediately discerns what kind of plants they are. Still, she briskly takes the sickly little things under her wing. "I'm a gardener -- these are sick plants," she says crisply, like a doctor on the battlefront.

After reviving one of the droopy invalids in her greenhouse, using a bright light and a doohickey that looks something like an IV drip, she and Matthew realize they could make a small fortune, enough for Grace to save her house, by employing a seemingly miraculous quick-growing method called hydroponics to raise a whole army of healthy plants -- and buds. She and Matthew set to work rigging up the greenhouse with mega-wattage light fixtures. Growing the plants is adventure enough; then Grace insists on going to London herself to sell the final product, where danger lurks.

Of course, it's not really very dangerous danger -- "Saving Grace" just isn't that kind of movie. Cole has noted that his picture owes a debt to the tradition of English comedies, particularly Ealing comedies like the 1949 "Whiskey Galore!" -- also known as "Tight Little Island" -- about a ship loaded with scotch that gets wrecked on a parched Scottish island. (Cole received permission from the British government to use real pot plants in his film, but the buds, alas, are fake.) In "Saving Grace," we get the obligatory scene of Grace getting high for the first time: She's sitting with Matthew, overlooking the ocean, and she begs him to let her try it so she'll know what she's selling. Predictably, she gets giggly. But Cole doesn't stretch the scene out beyond the weight it can carry, and at least we have that jagged coastline and vast pearly sky to contemplate while we're getting through it. (The whole picture, shot in Cornwall and London by cinematographer Sue Gibson, looks terrific.)

Cole also shows a light touch with the eccentric locals, the place a less-deft director would be most likely to go wrong. There's a vicar (Leslie Phillips) who retreats to his chambers to watch Hammer horror films at night, and a young doctor (Martin Clunes) who has a cheerfully progressive view of the nonmedicinal uses of pot. Most memorable are the two elderly ladies, Margaret and Diana (Phyllida Law and Linda Kerr Scott), who run the local general store, the kind of place where rigid-looking girdles and torpedo bras are still displayed on a countertop mannequin. It should be noted that Margaret and Diana also -- inadvertently -- sample some of Grace's product. They dissolve into giggles after offering a couple of would-be customers some of the cornflakes they're munching on ("They're heavenly!"), but they're so silly that it's hard to resist giggling with them.

Ferguson, who also co-produced and co-wrote the movie, has a dozey kind of charm, frequently looking as if he's just been shaken awake. (Then again, he is the movie's chief pothead.) Although the romantic subplot involving him and his fisherwoman girlfriend, Nicky (Valerie Edmond), feels forced and overly cute, he ends up being a reasonably appealing foil for Grace.

But more than any other character, Blethyn's impeccably mannered, vaguely prickly Grace is the one who keeps the movie from going soft. Blethyn brought a salty, mournful undercurrent to Mike Leigh's "Secrets and Lies," but was needlessly over the top and shrill in "Little Voice." Here, she strikes the perfect tone, and her timing is right in the pocket. In an early scene, we see her scrabbling through a drawer of dish towels to lay her hands on a hidden package of cigarettes. She lights one, desperately, and grabs a framed picture of her late husband from the shelf. A soft smile plays around her lips as she gazes at the photo, and she allows herself -- just as she's allowing herself that cigarette -- one moment of pure tenderness. In the next beat, she flicks her ash on the surface of the glass: "Bastard!" The word carries an undertone of frustration and anger that overtakes her feelings of affection, but that's as it should be.

But Blethyn is suitably gay when, dressed in a ghastly white, wide-lapelled, '70s-era pantsuit (clearly the proper country lady's idea of a drug dealer's outfit), she heads to London to hawk her wares. There she's drawn into a comically sensual tango with the allegedly ruthless drug lord Jacques Chevalier (Tchiky Karyo, who purrs his way through his scenes like a sexy tomcat). When he warns her that he's scum, she bristles, shooting back with typically English familial pride, "I take exception to that. I come from a long line of scum." Of course, he falls in love with her instantly -- what self-respecting scum wouldn't? She's genuine hipness masquerading in Wellies and a cardigan, and she doesn't have to take a toke to prove it.