George W. Bush is betting Americans will prefer a prodigal son to a dutiful one. 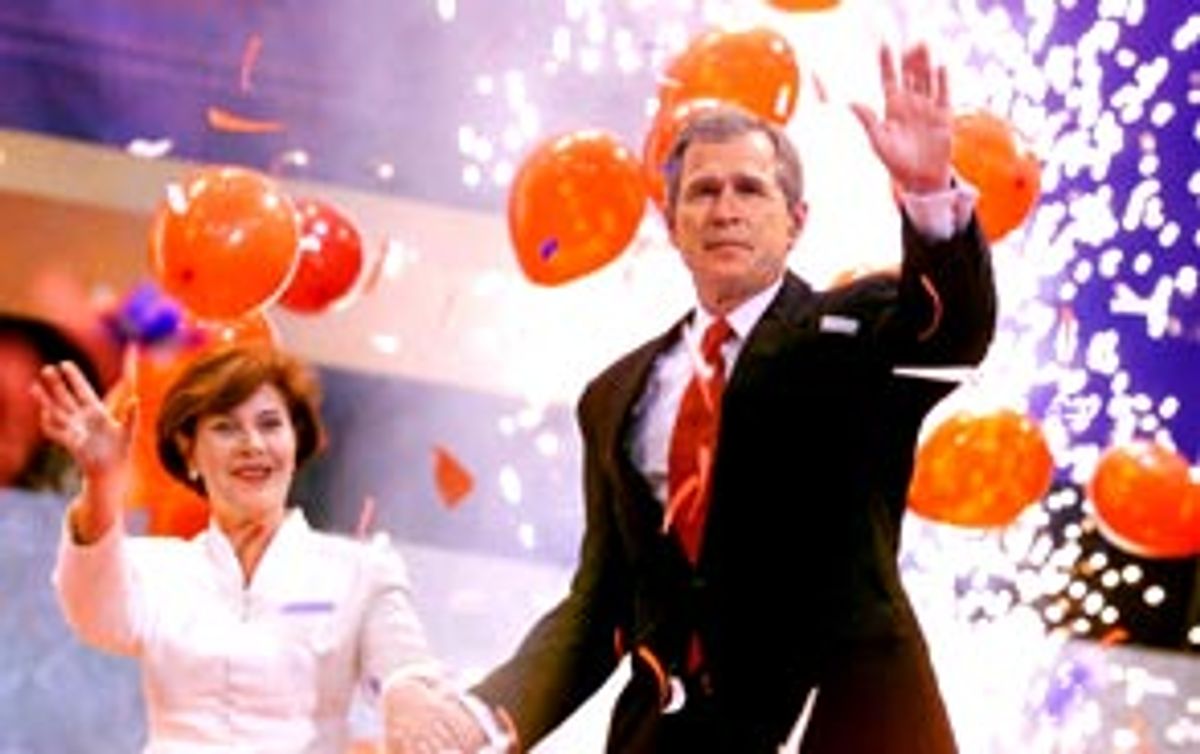 Diversity may have been the watchword of the Republican Convention, but George W. Bush's real campaign theme was not unveiled until the brief biographical film just before the nominee took the stage.

Splicing family interviews between conversations with the candidate behind the wheel of a pickup, the film recalled his Midland, Texas, childhood, moving swiftly from baseball cards to the death of his sister when he was 7, and the burden he felt as a child for maintaining his mother Barbara's spirits.

Then suddenly it is 1977. George meets Laura in Midland and they have twin daughters. "I realized I was responsible," intones the voice in the pickup. Everything between age 7 and 1977 goes unspoken: Yale and the famously wayward youth, the safe Vietnam-era commission in the Texas Air National Guard, the well-into-midlife decades of partying and drinking.

"I realized I was responsible." In careful synergy between film and speech, that phrase provided the backbone for Bush's acceptance script. He never overtly acknowledged his young and irresponsible years, though in the speech's opening moments he hinted at confession -- his mother "gave me love and lots of advice. I gave her white hair" -- and awe at his father's solid World War II generation. And in the speech's penultimate moments he returned to that late-dawning realization upon the birth of his children. "We must usher in an era of responsibility," he declared -- repeating "responsible" or responsibility" seven times in as many minutes.

Bush smoothed the soft edges of ideology in the speech because he wants the country to see his own journey from dissolution to leadership as a metaphor for the baby-boom experience. "We started as the 'if it feels good, do it' generation," he says in the film -- keenly aware that he's trying to succeed a president many believe never matured beyond that stage.

Against Al Gore, this may seem at first glance a questionable strategy. Despite the vice-president's dodgy moments Gore is, after all, an individual who married young, saw Vietnam combat, fathered a family and prayed for the life of his dying child, all during the years that Bush was trying to learn what responsibility meant.

But Bush is banking on the profound American love of personal rebirth, which transcends the liberal-conservative divide: a faith noted by de Tocqueville in the 19th century, reflected today across the cultural spectrum from "Amazing Grace" to AA. "We can begin again," Bush promised, repeatedly tying his own personal rebirth to the country's political fortunes. Al Gore never had a wayward youth to recover from -- and that, Bush hopes, is the vice president's loss.

Likewise, Bush is hoping that the Republican Party can be reborn as a moderate majority party (without sacrificing its fanatic ultra-right base). Just as Clinton stole classic GOP riffs with devastating success -- law and order, welfare reform, free trade -- Bush and his convention tried to wrap themselves in Democratic icons. After retired Gen. Norman Schwarzkopf gave his address Tuesday from the deck of the retired Battleship New Jersey, the first voice the convention heard was FDR. The Bush biopic featured clips of John F. Kennedy and Martin Luther King Jr. Bush's speech paid passing tribute to both the civil rights movement and feminism, both bjte noirs of the Republican mainstream.

Did such gestures throughout the convention herald Republicanism reborn, as Bush's rhetoric implied? We'll know more in November. For all Bush's talk of community and responsibility, it could not go unnoticed how many of his proposals Thursday night were in fact about withdrawing from the responsibilities and risks of real community. Turning Social Security into private investment and public-school funds into vouchers ("our dollars" and "our children," as Pennsylvania Gov. Tom Ridge put it Thursday); eliminating an inheritance tax paid only by a fraction of the wealthiest families; abrogating nuclear arms agreements in favor of a unilateral missile system (Bush: "Now is the time not to defend outdated treaties, but to defend the American people").

This appeal to atomized individualism is a classic Republican theme, despite Bush's rhetoric of renewal and responsibility. A middle-aged man can, perhaps, "begin again." For a political party, rebirth is a much longer road.