I was a guinea pig for a plastic surgery study. 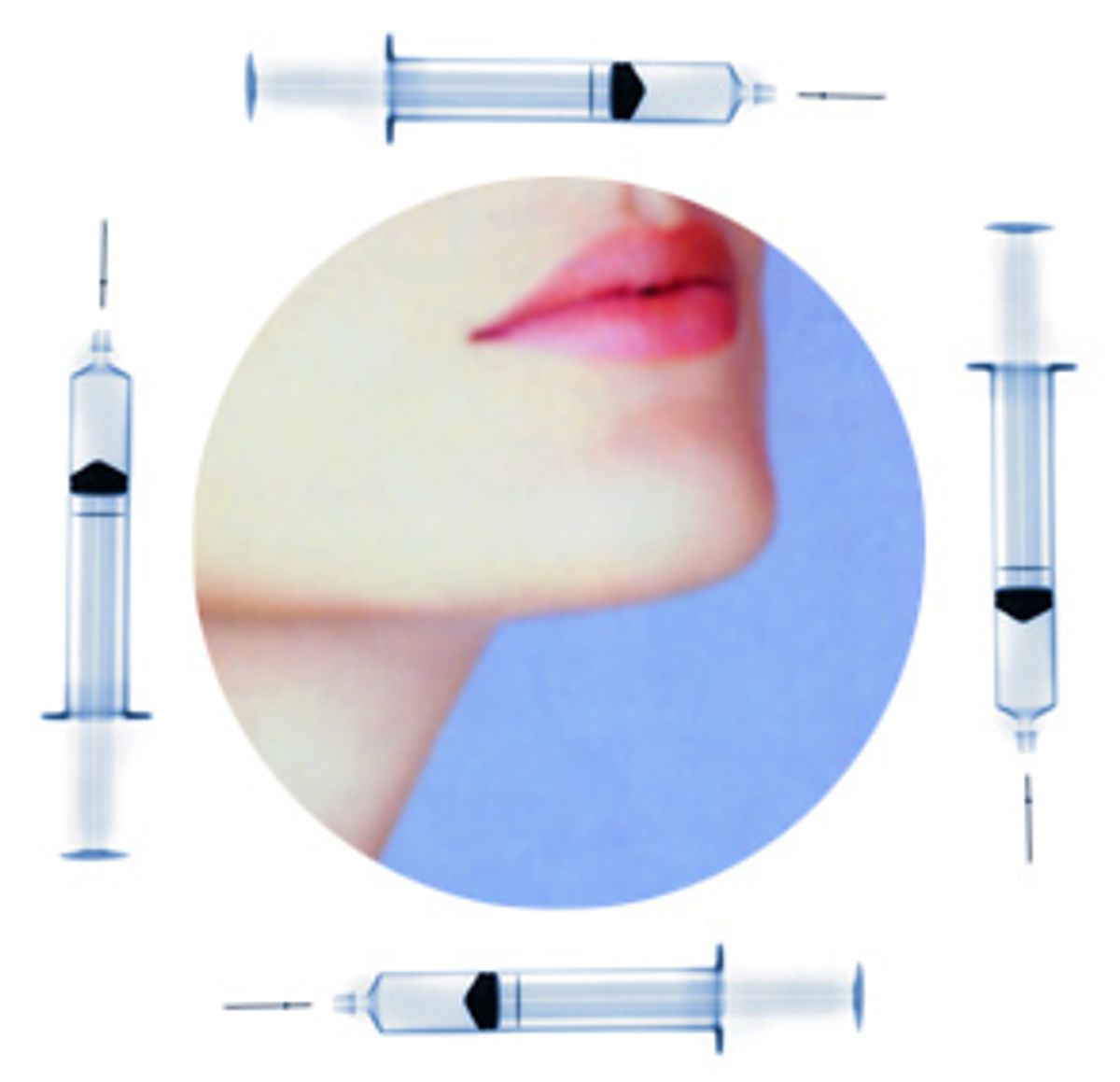 The door opened and two suits carrying black attachés stepped into the waiting room. I dove into denial about the Saran Wrap taped all over my face by fixing a gaze at the yellow stamens of some Oriental lilies which sat in a crystal vase across the room. It occurred to me that I once had a bikini of that same yellow hue. The two men were blond and flawless, and obviously didn't need the services of a plastic surgeon, yet they sat in the French provincial armchairs and flipped through pamphlets on liposuction and breast augmentation. I continued my catatonic stare at the lilies, while from the corner of my eye I could see the men glance knowingly at the Saran Wrap while speaking to one another in German.

After several minutes of this weirdness, during which time the yellow stamens had been burned into my consciousness forever, a cell phone rung, and the younger of the two men fumbled for it in his attachi. As he conversed, a woman's gum-popping, nasal whine leaked out of the phone. All I could make out was, "and the attorney said blah blah blah about the patent..."

After putting away the phone, the suits talked excitedly, then got up and, winking at me, disappeared behind the door to the examination room. I felt a jovial male rumble vibrate through the wall, and a moment later Dr. James Romano appeared, beckoning me in.

Surreal? Sure, but what did I expect? As a guinea pig in an FDA-approved study on a new plastic surgery called Artecoll, I had no illusions that I was doing something sane. But I had not been prepared for the dreamlike circus of science and commerce that accompanied this federally approved experiment.

Even in a green surgeon's shirt, Dr. Romano, one of 10 plastic surgeons in the U.S. chosen to participate in the study, was the epitome of suavity. The first time I met him in his 26th-floor downtown San Francisco office, I noticed how his complexion glowed almost radioactively. His shaven head was buffed to a high-gloss finish, and his smile assured me that he was the keeper of the keys. To where? I couldn't say exactly, but perhaps it didn't matter. If he had them, I was willing to go, only slightly uneasy at my lemming-like behavior.

I had set out on a journalistic quest to check out the newest cosmetic surgery sensation, but I knew part of my motivation was to indulge in a little narcissistic play. Although I was notoriously casual about my beauty routine, with most elements occurring biannually, if at all, I wasn't opposed to the idea of sweetening my potential as eye candy a little.

These days, my face sported remnants of too many reckless smiles on the beach where the only sunblock worn was my bikini. Coming into my 40s, I was developing a rather neo-Tantric appreciation for the divine qualities of the physical; it was dawning on me that it might be a good idea to appreciate the ol' bod before it deteriorated any further. Enhance it a little? What the heck. I wasn't interested in cultivating big drama here, like a torpedo boob job or killer bee-stung lips, just a little subtle, gradual -- how do the plastic surgeons say it? -- augmentation.

I'd deal with major gravitational shifts when their time came.

But the fact is, I hate needles. How I found myself sitting back in a reclining medical chair with four suits whose smooth tanned faces hovered mere inches from mine while Romano prepared to stick me a multitude of times, I do not know. Somewhere in the haze of the recent past I had decided to participate in a six-month double-blind study to assess the safety and efficacy of a cosmetic surgical product, invented by a German scientist and plastic surgeon, Gottfried Lemperle. (The two blond gentleman in the waiting room turned out to be none other than Mr. Lemperle and his son, Martin, in the U.S. to supervise the study.) Artecoll is being tested for cosmetic surgical use in the U.S., but has been used successfully, to great fanfare, for years in Europe, under the name Arteplast. The function of Artecoll is similar to that of the injectable collagen used by plastic surgeons for smoothing out lines and plumping up kissers, but with a difference that makes this baby the hottest thing to happen to narcissism in decades: Its effects are permanent.

Unlike injectable collagen, which is absorbed by the body over a few months' time, Artecoll consists of microspheres of a "biocompatible" substance called polymethyl methacrylate, which is held in a 3 percent collagen suspension and ultimately stays put where you put it. As the collagen is gradually absorbed by the body, tiny webs of the body's own collagen fill in the space it had occupied, cementing the microspheres forever into the epidermis. Polymethyl methacrylate is the same substance used to make Lucite and Plexiglas. If Artecoll is approved, as it seems destined to be, injectable collagen's days are numbered.

As one of a handful of guinea pigs, I was given a numbing compound, and instructed to slather it on "as thick as cake frosting," and cover the whole mess with Saran Wrap for two hours before showing up at the office. After Dr. Romano peeled off the plastic wrap, I sat back while he prepared his weapons and I listened to Mr. Lemperle and his son speak with the other suits.

"Ja, and I vas detained at the airport because I had syringes in my bag," said the elder Lemperle. "The police made me sit in their little interrogation room until my son faxed my surgeon's permit. I almost missed my plane."

"So," said the son, gracefully changing the subject, "shall we say Artecoll is for furrows or folds?"

"Furrows, I think," the father said.

One of the suits, of an FDA persuasion, threw his $100-an-hour two cents in, pointing out that furrows were, in the U.S., anyway, generally thought of as the wrinkle between the eyebrows, while folds were the rolls of flab you had left over from the winter holidays. Generally, he said, Americans tend to think of wrinkles as, well, wrinkles.

"Ah, then," said the inventor, "in the promotional campaign ve vill say Artecoll is for vinkles and furrows, but is not indicated for folds."

I suddenly realized that I would be witnessing this great moment in history.

Artecoll's permanence is what makes it so seductive. Like most other plastic surgery techniques, its intention is to facilitate skating as close to physical perfection as possible. By erasing the evidence of aging, Artecoll shamelessly intends to create an illusionary postponement of that inevitable backward slide into oblivion.

As I continued to lie in the prone position of a submissive experimental subject, my mind swerved off the road of lucidity and into the dark woods. I imagined some future time in history when what's left of my corporeal self would be deep under the earth, and microspheres of Artecoll would lie in my coffin along with my bones. If I chose to be cremated, would the poly material make a burnt-plastic smell?

It occurred to me that life as we know it continues to mutate daily, with the division between human and technology becoming increasingly blurred, and people grow ever more close to the machine. But it's harder and harder to keep this fact in focus. The word "bio" has been co-opted as a prefix by major corporations to connect their stranger-than-science laboratory concoctions to some kind of natural life. And the government seems to think that we don't need to be informed that we are Living Better Through Chemistry, as evidenced by its recent "why mention it?" decision regarding foods that have been "bio-engineered" and genetically altered.

As I lay back and ruminated in a very clean room on the 26th floor of a San Francisco building, I felt myself being sucked into a vortex of fantasy where Julia Butterfly admonishes me from atop Luna for not smoothing my wrinkles out with hemp oil. It was then that I began to wonder: does plastic have a soul?

I opened my eyes as the depth of my wrinkles were compared to a scale represented by photos of women's faces, from "pinch-and-spring-back" (zero) to "at-this-point-why-bother?" (eight). I was somewhere in the three range. Then Dr. Romano hauled out a camera with a gargantuan lens and shot pictures of my face from an illegally close range.

Then came time for the needles. Almost hyperventilating. I squeezed all the blood out of the hand of Linda, Dr. Romano's assistant, while he covered my eyes with a damp cloth. Highbrow German was tossed back and forth over my head, as my flesh was gently grabbed and stabbed. Romano said, "I'm sorry, dear," every time I flinched. After five "sorrys" I told him one "sorry" would stretch to cover all the jabs. He jabbed me again, and said, "Sorry, dear."

All along, superlatives sprang up in smooth male voices, floating and hovering above me. "Lovely! Oh, that's nice! Perfect, perfect. Ah, yes!" Every so often, Artecoll's inventor advised on technique.

When it was over, the whole passel of males complimented me on my new look, sans the mark of time. Romano handed me a mirror.

I glanced at my reflection. Where the lines had been were rows of little red needle tracks. I was told that the redness and swelling would soon disappear, but not the smoothness. That is, if it were Artecoll, and not collagen, the control substance in the experiment. I wondered, would all these suits waste their time on me just for a routine collagen injection?

As I stepped out of Romano's gilded Art Deco office building and back into the world of gravity, poverty and imperfections, I wondered whether I had made a terrible mistake. All of a sudden, I felt as though a hideous scarlet letter V for Vanity had been branded onto my forehead for the whole world to see. How could I tell anybody I had just had plastic injected into my face?

Just what kind of card-carrying narcissist was I anyway? I drove home in a kind of postpartum depression. I had given birth to a new image of myself and I was crashing. On the way back, I stopped by the video store and rented "Gandhi" and "The Elephant Man," planning a massive overdose of guilt.

I drove up the hill to my mountain home. As I fed the cats, a breeze cooled my face. It was still my face, after all. Later, as I brushed my teeth, I inspected the "work" in the mirror. I just looked a little less stressed out. Maybe now that I looked more relaxed, I would be more relaxed, like I was 25 and still had several years to blow. Maybe.

As sat on the couch watching David Bowie as the Elephant Man crying, "I am a man! I am a man!" I realized that the molecules of plastic in my skin would find some affinity with the rest of me, and I would prevail. Artecoll, this weird artificial substance that lay just under my skin, couldn't compete with this feeling. I knew that the following morning, I would pick my daughter up from Grandma's, and we would go down to the river and practice rock skipping. Even with smoother skin, there wasn't any stopping, as Jay Farrar puts it, "the traveling hands of time," but dang if I wasn't going to try and find meaning and enjoyment as each moment came and went, skipping away forever.

Miranda Lee is a freelance writer in Northern California.