Is there a difference between slasher films and gory tales from the E.R.? A spate of tell-all books by doctors gives us what we crave: Gruesomeness with a purpose. 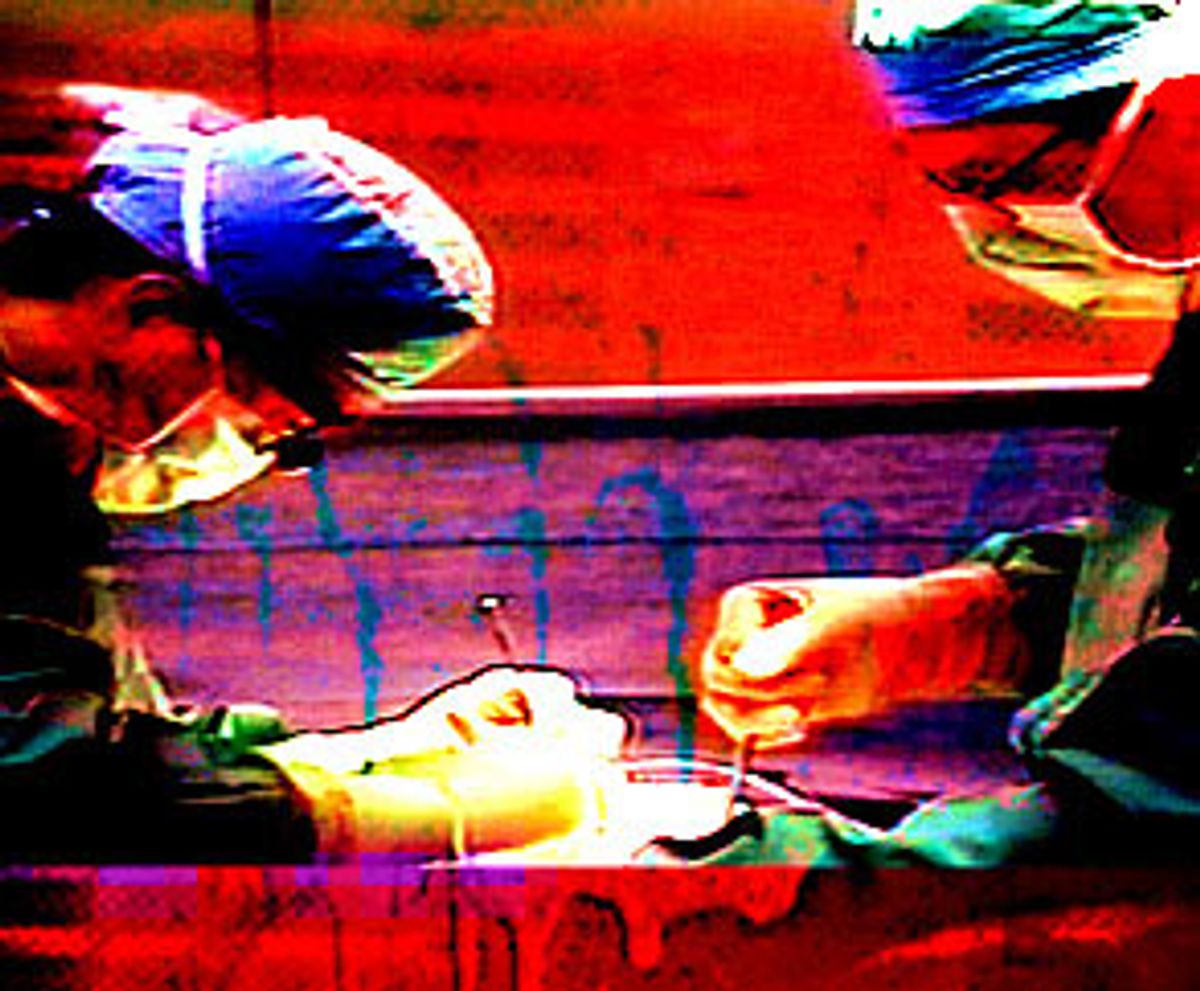 So there I was reporting from the scene in the operating room of a Moscow hospital, staring with creepy fascination as the surgeons prepared to give Oksana, a Russian transsexual, the vagina she'd always craved. First they extracted two plump masses of dark red pulp -- her testicles, I gathered -- and tossed them right by me into a bloody trash bin. Then they deftly whittled the penis away layer by layer, peeling down thin slices of skin as if it were an onion, leaving the flaps of flesh attached at the bottom of the dwindling shaft for use in constructing Oksana's new genitalia ...

Has anyone clicked off yet? Probably, but I'll bet many more -- grossed out though they might be -- would gobble up any further details I chose to divulge.

Gore is hot these days. I'm referring, of course, to the dripping-blood-with-bits-of-flesh-and-internal-organs variety, not the deathly wooden presidential wannabe. We'll leave the vivisection of that particular corpse to the Republicans. But real gore seems to be a vernacular of increasing obsession; lately it's been oozing out all over the place, from slasher movies and rap lyrics to medical dramas and cop shows.

Now the success of shows like "ER" and "Chicago Hope" has spawned a whole literary genre: the blood-soaked memoirs of emergency room and intensive care doctors. Out last month was Pamela Grim's "Just Here Trying to Save a Few Lives: Tales of Life and Death From the ER," and "Intensive Care: A Doctor's Journal" by John Murray, an attending physician at San Francisco General Hospital. William Bonadio's "Julia's Mother: Life Lessons in the Pediatric ER," was published this spring, and last year's "The Blood of Strangers: Stories from Emergency Medicine," by Albuquerque physician and poet Frank Huyler, is due out in paperback in October.

These four books approach their subjects in different ways, but blood, sputum and decaying or bullet-ridden body parts play a central role in all of them. By turns harrowing, tender, sardonic, informative, funny and emotionally draining, they offer enough horrific tales to sustain the interest of even the most morbidly inclined readers. In the past few days, I've learned more about the sound a chest makes when it's cracked open to reach the heart, the corrosive long-term effect of vomiting on a bulimic's esophagus and the smell of burning flesh produced by defibrillation than anyone (aside from a health care professional) would want to know. Yet I couldn't stop reading.

Somehow this sort of information never made it into the antiseptic, feel-good hospital dramas of my childhood, like "Medical Center" and "Marcus Welby, M.D." Those shows treated medical professionals with the hushed reverence reserved for Catholic priests in the pre-pedophile era. Doctors knew everything then; life -- and death -- were under control. That's a far cry from the adrenaline-fueled, blood-splattered, AIDS-haunted, bullet-addled, smack-happy universe of "ER," "Just Here Trying to Save a Few Lives" and "Julia's Mother."

Take this passage from "Just Here to Save a Few Lives," in which Grim -- and what an apt surname that is -- is treating a teenager shot in the chest: "Blood splashes against your goggles and all over your jacket. You've unloosened a torrent of blood that quickly fills the chest cavity and overflows onto the floor ... You are up to your coat sleeves in the blood in this boy's chest. The blood has cascaded down onto the floor. There are two inches of blood where you are standing. Your shoes are soaked with it."

What's going on here? We clearly crave having our faces shoved into guts and chest cavities and other bodily orifices. Maybe we're so comfortably cocooned these days in our cappuccino worlds that the reality of decay and death seems a distant echo, and these works allow us to indulge our ghoulish tastes while feeling like we learn something in the process. This is gruesomeness with purpose. Guilt-free gore. Morally sanctioned rubbernecking. When I watch "Halloween Hatchet Murders on Elm Street: Part 11," I feel the need to take a three-hour shower afterwards and purify myself with PBS documentaries about macrame workshops in Appalachia. But after reading these books -- four of them in a row, in fact -- I can lounge back on the couch and sip my espresso, thinking deep thoughts about life and death and the wisp of fate that separates them.

Certainly the publishers claim that their offerings deliver something better that Peeping Tom pleasure. According to the jacket of "Julia's Mother," readers will "share in the nobility of a parent's unending search to find meaning in tragedy." The cover copy for Grim's book informs you that it will "lead you to appreciate the resilience of the human body and human spirit as never before"; "The Blood of Strangers" touts its "lyrical meditations on the world of ER medicine -- and the world at large." Intensive care apparently offers more prosaic benefits. A press release from the publisher assures that you will receive "a comprehensive understanding of what an ICU is, what it does, who gets admitted, and how doctors and nurses make decisions concerning life-threatening medical problems."

Some of these claims are more accurate than others. The books do offer epiphanies and insights, but they are not necessarily what the publicists tempt us with. "Just Here To Save a Few Lives" is a well-written, often-riveting account of emergency medicine by a conscientious doctor who has seen it all, and then some. Bitchy, honest and brutally funny, Grim is a cross between Anne Lamott and Dr. Kildare. But I'm not sure where the moral uplift comes in. At one point the good physician feels so depressed and burned out that she considers leaving emergency room medicine for the soft Muzak world of hair transplants, although we suspect she ultimately won't.

Grim does reveal moments of transcendence, but even those are shot through with a haunting self-knowledge, like her emotions after the hellish birth of a crack baby: "Right now the baby is alive, moving, wiggling those little hands in the air. A live baby. And what they say is true, you do feel like God -- no, not God, really -- just like a manifestly great human being. Carol, the pretty nurse, looks beautiful now and she is glowing at you. Even Helen, the nurse who hates you, is glowing a bit, though not specifically in your direction."

The most striking element in that passage is the author's ironic awareness of her own grandiosity and her gnawing sense that the power she suspects she holds over life and death means almost as much to her as the healthy delivery of this specific baby. And that aching ambivalence and uncertainty, perhaps, is what gives the books their special hold on the imagination. It's not the triumph of the human spirit we're witnessing, as rewarding as that might be, so much as the struggle to comprehend the essence of life -- and the human role in it -- through a total immersion in the most intimate anatomical processes.

"In Intensive Care," Murray immerses himself in this world in a different way. If he has screamed at crack users in frustration the way Grim has, we won't learn about it from him. Whereas Grim's language shoots off sparks at every juncture, Murray's is measured and dry. "The budding yeast in the first samples of his sputum and peritoneal fluid are Candida albicans, a ubiquitous fungus that commonly causes superficial infections of the skin (diaper rash) or internal membranes (oral thrush, vaginitis)," he writes of one patient. "Similar organisms are growing in the two newly submitted specimens from his lung and belly, and also in his urine."

This is great stuff for medical students who want to understand what ICUs are like. It's great for ethicists and public policy wonks who study the factors impacting health care decisions. But a page-turner it's not. The average Jill wants drama; she wants the edification alongside the hardcore stuff, not instead of it.

Yet not even the clinical tone of a work as earnest as "Intensive Care" can offer the comforting illusion of control over physical processes. Our bodies are in free fall every moment of our lives. Murray and the other docs know that, and so do we all. This invites the question: If I die because blood gushes out from a bullet hole, does my life really amount to more than that blood? Is it more than the appendix that just ruptured or the liver destroyed by hepatitis C? If I soak up images of gore and disaster from a safe enough distance, can I learn anything at all about what's going on? Can I understand life better by dwelling on death? When these books work best -- at least for me -- is when the doctors grapple with that dilemma and allow us to witness their awe, fear or fascination at the incomprehensibility of it all.

"It's eerie, to look down and see your hands lost deep working inside a human body cavity," William Bonadio writes of dissecting a cadaver in his medical school anatomy class. "Exposing the internal mechanism to the light of day for the first time, like an archeologist shining a torch on a cave wall filled with hieroglyphics." Although I've never had my hands where he has, this sounds about right to me. So do the questions that his exploration of the cadaver's body organs make him want to ask the woman it used to be: "How did it all turn out? If I could ask her, what would she say was the most important thing? Her biggest regret? Tell medoes any of it really matter, after it all passes?"

Those are not questions the all-knowing Dr. Welby -- or even my father, a retired physician who once ran the intensive care unit at a county hospital -- would ever have asked. But they would certainly occur to Frank Huyler. "The Blood of Strangers" is an eerily seductive account of emotionally disconnected E.R. doctors and their quirky patients, and the brief vignettes that compose the volume read like perfectly constructed short stories.

Spare in tone but richly observed, the tales convey the requisite graphic details in homespun language that heightens the effect. Here is Huyler on shaving flaps of healthy skin off a burn victim so they can be grafted elsewhere: "When you do it right, there is a curious pleasure there, the skin rising, curling up like a slice of cheese from the blade." In the case of a car accident victim, "his head, the bones of his skull, felt loose, like gravel and warm bread." It's surely no accident that the title of his book would be equally fitting for a biography of a serial killer.

Refreshingly, Huyler does not disguise his own squeamish interest in bodily decay. When a nurse beckons the medical team to view what she declares is "the grossest thing" she ever saw, they gather round as she shines a flashlight into a patient's mouth.

"His mouth was like a little pink cave," writes Huyler. "Inside were dozens of tiny white worms. As we watched, they began to move, to retreat into the darker recesses, away from the light ... The room erupted. We were horrified, but also excited, exhaustion washed away ... We took turns, switching off the light for a minute or two until the maggots came back, then illuminating them, transfixed by their retreat into the dark."

Riveting? Yes. True and funny in a dark and really disgusting sort of way? Absolutely. A portrait of the triumph of the human spirit? Gee, I'll have to get back to you on that one.