Reproductive as a rabbit, abstinent as a nun

Between fertility treatments, pregnancy and parenthood, my husband and I have no time to score. 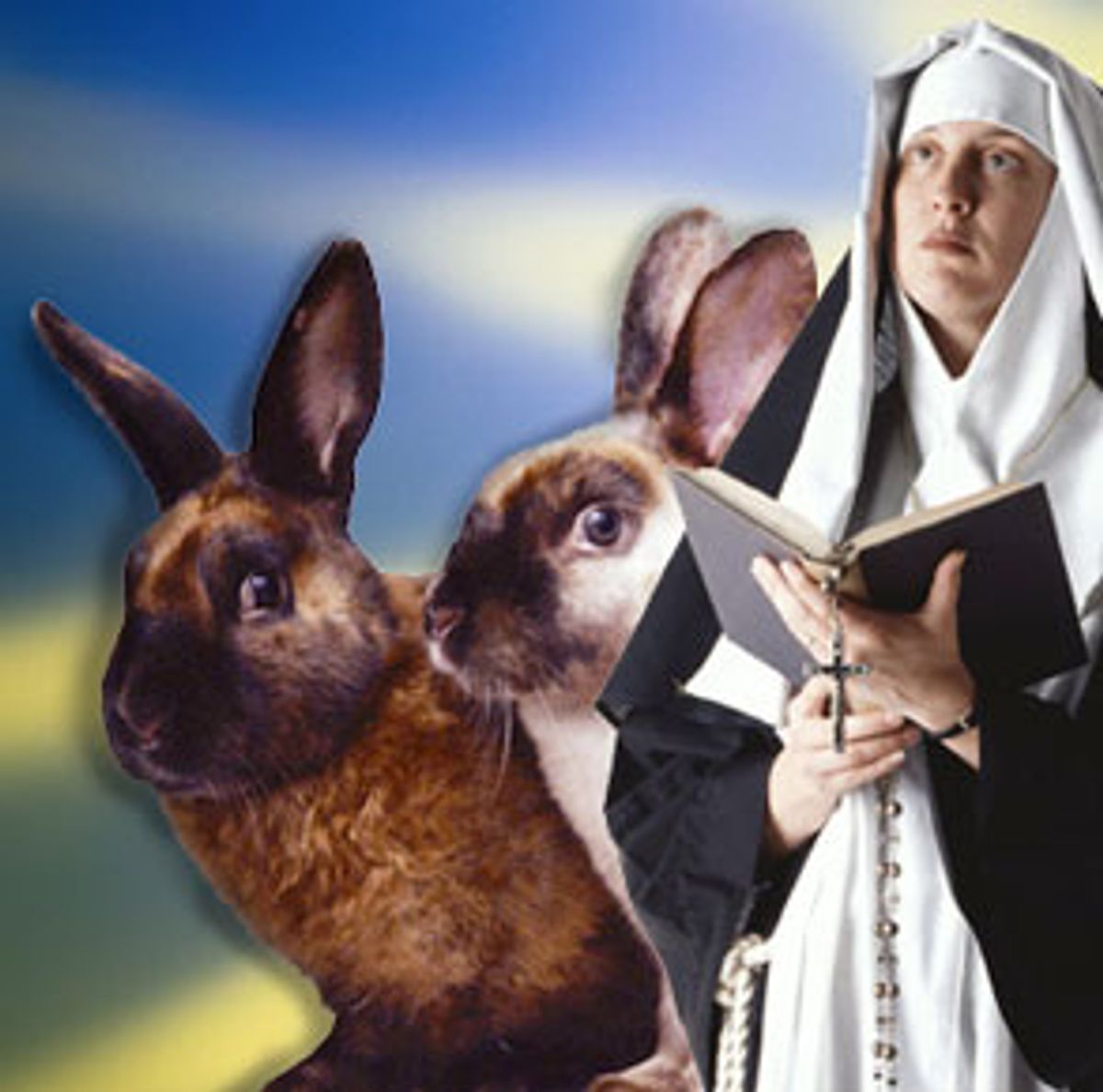 It's a cool Florida winter night. My husband has always had a certain cold weather allure. A tall, lean fellow, Bill looks great in flannel pajamas and a terry cloth bathrobe. And there he lies in both, available, appealing -- and reading Penelope Leach on toilet training.

I'm reading about VBACs (short for vaginal birth after cesarean), trying to find a comfortable position for my bulging belly and feeling distracted. The next morning promises another wardrobe showdown with our 2-year-old, Isabelle, and the book "Toddler Taming" that's sitting on my bedside table may be just what I need to ensure peace and tranquillity. But it's 11:30 p.m. We turn off the lights and crash.

Maybe tomorrow night, I think, I'll get to "Toddler Taming."

My husband and I used to have sex on a regular, romantic basis. For years we weren't trying to make a baby. We would just be in the mood. One thing naturally led to another. I didn't even mark the event on my calendar.

Fertility treatments, pregnancy and parenthood changed all that, putting us on a sexual roller coaster more unpredictable than anything I've experienced since adolescence. Lately, I'm having either too much sex or too little, as reproductive as a rabbit one month and as abstinent as a nun the next. Wildly fluctuating hormones and crash efforts at late-in-life reproduction explain some of this variation. Parenthood explains the rest. My husband may look fetching in flannel, but he's now the fellow I spar with over diaper duty, negotiate with over family finances and meet with to schedule the painter, the plumber and the roofer. The leap from logistics to lust can be a long one. And then to find a time when we are both in the mood and awake and able to be alone together -- now that's timing.

It has become difficult to think of having sex for its own sake. Our fertility efforts put us on a strict monthly schedule: Every 48 hours. Every 36 hours. Every 24 hours. Ready, set, reproduce! For almost two years, sex was an item on my to-do list, along with grocery shopping and banking. No longer simply a woman with an appetite, I was suddenly a woman with a mission. Mood had little to do with anything. And humor, not lust, was the essential ingredient. What else can get you through when your man is holding a long needle filled with Pergonal, describing the shape of your butt over the phone to a medical assistant to ensure proper aim? "But you don't even cook!" I protested, laughing amid tears as he jabbed the needle in (with amazing dexterity, thank God).

When all that purposeful sex resulted in my first pregnancy, it seemed odd at first to even consider having an unscheduled romp. Why? What for? And what a relief not to! Hormones being what they are, that didn't last. Briefly, before my belly got too big and sex became more funny than sexy, Bill and I reverted to our old romantic ways. For a few months things were "normal," that is, sexy, sweet and, best of all, unplanned.

Then Isabelle arrived. Suddenly sex had to compete with the one thing we really couldn't get enough of: sleep. In those first months it wasn't even a contest. I chose sleep. This wasn't good. Newborns bring enough stress into a marriage without adding sexual tension to the combustible domestic mix. I'm sure Bill and I would have fought less as new parents had we made love more. But when you have to get up at 2 a.m. to feed the baby, having sex seems like the stupidest thing you could possibly do.

Yet after a year we were riding those roller coaster heights again, trying for baby No. 2, using a formula a friend swore by, which consisted of having sex every 36 hours. I plotted out the month's sex schedule on my calendar. Prime time coincided with a law conference Bill had in Vermont, so Isabelle and I went with him. At first the prospects for a successful mission looked bleak. Then the session on international tax law adjourned, Isabelle napped and -- presto! -- we launched baby No. 2, no doubt a little lawyer, now in utero.

If timing has proved one challenge to our sex life, geography has been another. Sex, once largely an exercise in seduction, after pregnancy involves a significant amount of damage control, and Bill has had to learn to negotiate unpredictable and treacherous terrain. There were those enlarged breasts from nursing, alluring to the eye, yes, but when it comes to caresses -- ouch! There was that bright red C-section scar that ran across my lower abdomen, tender and about as inviting as a stretch of barbed wire. And now my belly rises like a large mogul on a ski slope, inviting a wipeout. I'm not the woman I was two years ago -- or even last week. I'm an obstacle course with ever-changing markers. One misaimed caress and you're out. Bill learned this lesson one night when, to his astonishment, I burst out crying after a little innocent foreplay because -- well, I just don't know why.

It's enough to make two adults in their 40s feel like fumbling adolescents. This isn't all bad, of course. There's more than one way to conquer the mountain and I haven't enjoyed making out so much since high school. And after five years of marriage it's nice to see my husband smirking like a teenage boy who has gotten away with something when things do work out.

Anyway, for now, maybe how much sex we have and how we have it aren't the point.

Recently, I started dreaming about seducing a fellow with thick, dark hair and full lips. The dreams all ended in frustration. Every time I got close to scoring, some relative or small child interrupted. I couldn't get my dream man alone.

Awaking from one of these dreams at 3 a.m., I felt frustrated and restless. I considered waking up my husband. But Isabelle rises early and during my pregnancy Bill has been getting up with her. He's tired. And now that my belly is the size of a beach ball, I wasn't quite sure what I would do with him, anyway.

But to be partnered and sexually frustrated -- how ridiculous! Isn't convenient sex supposed to be one of the great boons of marriage? No need to dress up, find Mr. Right and show him how to get down your particular set of slopes. This is worse than being single, I thought. I've got the guy, but I can't do a thing with him.

But hey, I do have the guy! My dream man may be unattainable for now, but he also happens to be old sugar lips sleeping right beside me -- the man who does the morning shift and smells like exhaustion, the fellow who keeps asking me whether we should buy steel or aluminum hurricane shutters. I'd be lying if I said I always dream about Bill. The smell of baby spit-up can be a powerful anti-aphrodisiac, and sometimes Liam Neeson makes for good fantasy fodder without the messy domestic complications. But mostly, I'm lusting after my mate, which sure beats chasing the fellow on the next barstool.

Perhaps it's the old saw: We women always want the guy we can't have. And in a neat Catch-22, the domestic demands of parenting can incite lust by making one's spouse deliciously unattainable, even if those same demands make it more difficult to consummate the attraction. The fact that Bill is less available for a romp with me because he's getting up early to be with our daughter has a definite appeal to a lady now in her ninth month. When he bought new tires for the car this week, I fell in love all over again.

Who cares if we get to home base as long as we get to the hospital?

Jennifer Bingham Hull is a Miami writer who reports on women's issues and international affairs.