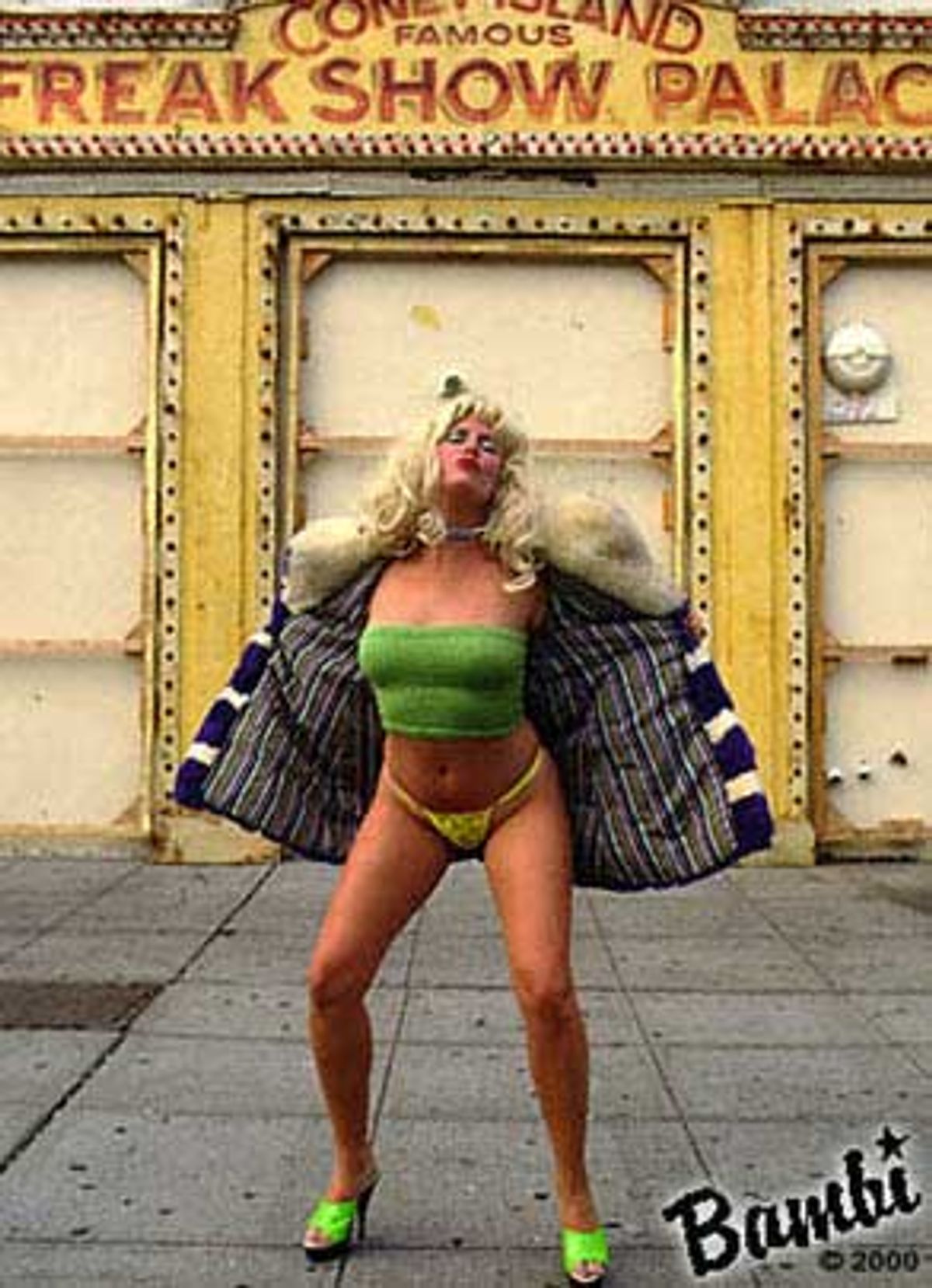 Bambi the Mermaid and her husband, Indian Larry, are show people. He does motorcycle stunts and the bed of nails at Coney Island; she snake charms and does a geek act dressed as a mermaid. In her act, for which Bambi wrote the script, she says she "got washed up in Coney Island, beckoned by the Wonder Wheel and the bright lights ... My friend Lynn is my Wild Ocelot Girl, raised by ocelots. I say I brought her back from Fiji; she brings out live goldfish and plays with them like a cat until she catches one and I eat it. Then she brings out a Chinese food carton full of live worms and I eat them with chopsticks."

Bambi and Larry live in a large studio in New York's Lower East Side with a tiny white dog named Velvet Underpants, a ferret, two cats and three albino Burmese pythons. Because there's not enough closet space, Bambi's collection of mermaid tails and feather boas and platform shoes lives out in the open like another pet or a member of the family.

Bambi's a Midwestern gal, voted "most preppy" in the Class of 1984 in her St. Louis high school. "But it was a fashion trend, not a lifestyle," she hastens to explain. The whole time she was wearing Shetland sweaters and Topsiders, she really wanted to be a cheerleader. She didn't want to date football players or run with cheerleaders or learn back flips. "I was just obsessed with the uniform, to be able to wear that little, flirty, cute skirt with the panties underneath and the saddle Oxford shoes, I wanted that so bad."

But when she tried out for the squad, she froze. She also tried out for the debate team, "but I got all red-faced and stammering." Her first success on a stage was a best-legs contest in a Tallahassee, Fla., bar during college. "I got a totally '80s 'Flashdance' outfit together; I think I danced to 'Maniac.' And I won! I was completely not nervous or afraid, I felt like I ruled the room ... Even my goody-goody sorority sisters were proud of me."

Since then, Bambi's followed her exhibitionism into sex work and performance art, wherever the outfits are sleazy-cute. Though her clothes fetish is not tied to sex directly -- like, say, the client who would rather have sex with Bambi's shoe than with Bambi -- her aesthetic rules her work and life. Dressing like cheerleaders, mermaids, strippers, bikers or carnies may be an ironic affectation for some of her downtown friends, but for Bambi it's self-actualization. "I think people should know they can live their dream. I did. I wanted to be a mermaid ever since I was little, and now I am." Bambi tends to bend facts and fables to fit Bambi -- she doesn't see a mermaid as Hans Christian Andersen's frustrated lover or a creature luring sailors to suicide. Indeed, the ocean is a cornfield in her cosmology.

"Mermaid to me means trying everything and being curious ... The whole idea of leaving this underwater life is an allegory for me, an ordinary girl born in the Midwest, where I was supposed to stay and raise children, but that wasn't good enough. Instead I went to as far extremes as I could." Not at all incidentally, she looks great in a fishtail and pasties.

She also fed her uniform jones and erased the tryout trauma by starting the performance troupe Pantyless Cheerleaders with some girlfriends. They perform lewd pom-pom routines at burlesque nights in bars and nightclubs, granting quick peeks under the flirty skirts.

Bambi studied photography in college and tried that side of the camera when she moved to New York 10 years ago. "All I wanted to shoot was girls dressed like babies or with their lipstick smeared all over their faces, but my work would be shooting a guy at his desk, some vice president. It was so stressful and awful." She stumbled into doing make-up for video and photo shoots, and that remains her primary source of income. "Money from domination is purely fun money, I just buy shoes with it," she says.

In 1992, she got a week-long gig doing make-up at a huge strip bar in Queens. At first she was awestruck: "I'd always thought strippers were superior to me ... Then I got in there and found out these girls were naive, or stupid, or poorly educated or not even that cute or [had] not even that great a body. They talked about the most inane stuff and had these horrible boob jobs ... And they'd come down to the dressing room and unload these mountains of money!"

The first night on the small stage was "very gratifying. I'm so into myself, and there's all these mirrors. I looked so good." But she left after a week because the club was "very rigid about dress. I had to wear pumps, which I hate, and a neon bikini, nothing funky or with any style. Then they asked, 'Is there any plastic surgery you're thinking about having?'" The club, it turned out, had its own surgeon. The management would have a girl "done," then dock her pay for the fee.

Next Bambi tried a lap-dancing club in Manhattan. She didn't mind the gyrating, but she found the solicitation "humiliating and awful. You have to go around asking these gross people who you'd never talk to in a million years, humbly, if they want you for a lap dance so they'll give you 20 bucks. It's like begging."

Then she found "stripping Mecca, one of the best places I've been in my whole life." It was a dive bar back in Queens "where anything goes. I could wear costumes; there were old girls, fat girls, girls who couldn't speak any English ... The clientele was so blue-collar they didn't have any expectations, and I was younger and prettier than the other girls who worked there, so I was really popular. My friends would come from Manhattan, and I started pushing the limits. I'd wear animal masks and do interpretive weird animal stripping and the regulars were never fazed."

Being in men's magazines was even more thrilling than stripping, the culmination of a childhood dream. Bambi first became fascinated with her father's Playboy magazines when she was a toddler. "I loved those women, I thought they were so beautiful and powerful, to me it was almost like the Bible ... When I was 5, they asked me what I wanted to be when I grew up and I said 'a hooker.' It was the influence of '70s TV: The hooker got all the attention and wore the outfits and drove the convertible Corvettes ... while these women in beige were working at the bank."

Bambi says "beige" like Dr. Laura says "homosexual" or Ralph Nader says "corporation." It is the force she's devoted her life to battling. Every woman wants to be sexy, goes the Bambifesto, so they should all put on a boa instead of "just marching along in this big beige line, wasting their lives."

It's easy enough for a knockout to preach, 'Be a sex goddess!' but what are the plainer birds to do? Bambi's clearly heard this before and answers with a sigh, "It's true, I'm thin and pretty ... but still, why should you give up because you're overweight and not technically pretty? OK, if you're fat and your only dream is to be a fashion model, you're going to have to reevaluate, but you don't need to be oppressed by everyone saying 'fat is bad.'"

Bambi's getting excited, as she always does when she preaches her gospel of glitz. "And if you're fat, why in the world would you march around in a forest green sweatsuit?!? Why don't you wear a sequined green dress and a pink wig? There are so many ways to express yourself and be beautiful without just overcoming your flaws. Who has more fun than drag queens?"