How I bought into a sucker's scheme. 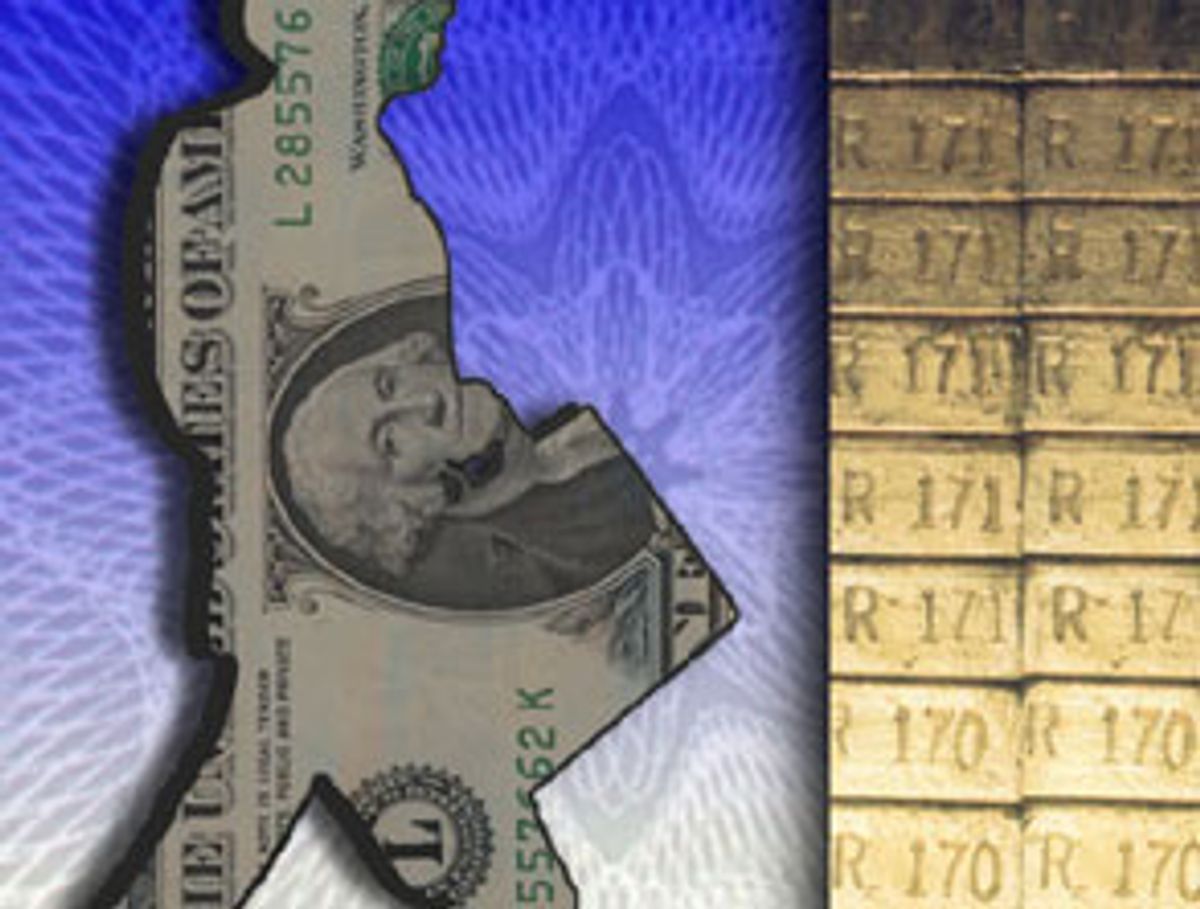 I blame some of it on myself. But I blame the rest of it on the government. Inflation has arrived, but no one will admit it.

Even as we continue to read data that indicates the economy is slowing, the I-word goes officially unuttered, and the Fed withholds its option to raise interest rates. Commander Alan Greenspan placates a frazzled Wall Street with a reassuring message that new hikes do not appear necessary.

This is why I continue to lose money.

Historically, gold is a great bet against inflation. Last February, when inflation seemed imminent, Placer Dome, the world's fifth-largest gold producer, joined others in the industry with an announcement that seemed to open up a primo investment opportunity.

For years, wholesalers bought gold from gold companies at a higher price than the market, anticipating that over the long term, the price would rise. This practice, called hedging, becomes profitable to gold companies when prices fall. But if gold prices rise, the companies get stuck with the lower price.

Placer Dome, in Vancouver, B.C., said there would be no more hedging. And gold rallied nicely. I jumped in and purchased a chunk of Placer Dome shares. Unfortunately, the rally fizzled within days. My decision turned out to be a big mistake.

So what went wrong?

The Gold Anti-Trust Action (GATA), a lobbying group in Dallas, believes the gold market is being manipulated. I do, too.

When I first started looking into the matter in February, I wasn't convinced; today, something suspicious indeed seems to be going on. GATA chairman Bill Murphy, who's worked in the gold industry for 30 years, says the U.S. government is conspiring with the Exchange Stabilization Fund and some bullion banks to hold down the price of gold for political and financial gain. (The ESF, under the jurisdiction of the secretary of Treasury, was formed in 1934 to provide exchange rate stability in the foreign exchange market.)

Annual gold demand and prices have been rising but the government's Producer Price Index (PPI) and Consumer Price Index (CPI) haven't shown much upward movement. Some in the media, including New York Post business writer John Crudele, have questioned the government's official inflation reports. Even Greenspan sometimes relies on private data to access the state of the economy. Murphy attributes the refusal to acknowledge inflation to the coming election -- a time when no one wants to put a damper on the good times.

But look at oil prices and it's clear there's reason to be concerned. Last year, crude oil traded at between $14 and $15 per barrel; it's currently trading at $30 per barrel -- a 13-year high. Inflationary pressures from high oil prices are significant, though often dismissed by Wall Street as not being part of the "core" inflation rate. Yet, world finance ministers at a July meeting in Japan said high oil prices could hinder global economic growth.

Commodity prices and wages are rising. With demand so much greater than supply, the price of gold should be rising.

So how is this alleged manipulation being carried out? GATA describes the process like this: The world's central banks have large reserves of gold, which are loaned to bullion banks, and which, in turn, are sold to jewelry makers and others. Central banks charge a low interest rate -- say 1 percent on the borrowed gold.

When bullion banks sell gold short, they have an obligation to replace the borrowed gold. (Selling an investment that you don't own is referred to as selling short.) If the price goes down, the gold can be purchased at a lower price and returned to the central bank at a profit. If the price goes up, the bullion banks lose money because they have to pay a higher price to replace the gold.

Meanwhile, Murphy says, bullion banks invest proceeds from the gold sales at a much higher rate than the 1 percent they are charged to borrow the gold.

Gold analyst Frank Veneroso claims world gold loans to bullion banks at present are as high as 12,000 tonnes (a ton equalling 1,000 kg). Not every analyst agrees with his figure, but there is growing concern about the large amount of outstanding gold loans.

GATA says a financial crisis could occur if investors start buying lots of gold. Heavy buying would spike the price of gold and bullion banks would be forced to quickly buy back the gold they have borrowed ... at a much higher price. Murphy believes that under those conditions, the selling pressure would not be strong enough to offset the frenzied buying. The bullion banks would lose a lot of money.

Gold now sells at about $281 an ounce. Veneroso believes the price would be closer to $600 if the manipulation of the gold market stops. GATA has met with Speaker of the House Denny Hastert, R-Ill., and handed out a 100-page document called "Gold Derivative Banking Crisis," detailing the alleged manipulation to the Senate Banking Committee. Since then, the Senate subcommittee on Technology, Terrorism and Government Information has requested copies of the document, and GATA has asked for a full investigation.

In September 1999, the European Central Bank signed the "Washington Agreement," which limits gold sales for five years by 15 central banks to 400 tonnes per year. This signaled a lower available gold supply. Heavy selling ensued and another rally fizzled.

If this story is true, then I have bought into a rigged market -- a sucker's rally. I am hardly alone in my frustration. What am I going to do with my Placer Dome shares? For now, I'll hold on. I think inflation is very much alive, if not accurately reported. The stock market's volatility is a big concern; I am worried about the U.S dollar bubble. If things go sour, gold could go to $600. It all comes down to patience.