With Sampras and Agassi aging, men's tennis hopes to excite fans with a fresh crop of young men and a ballsy new ad campaign. 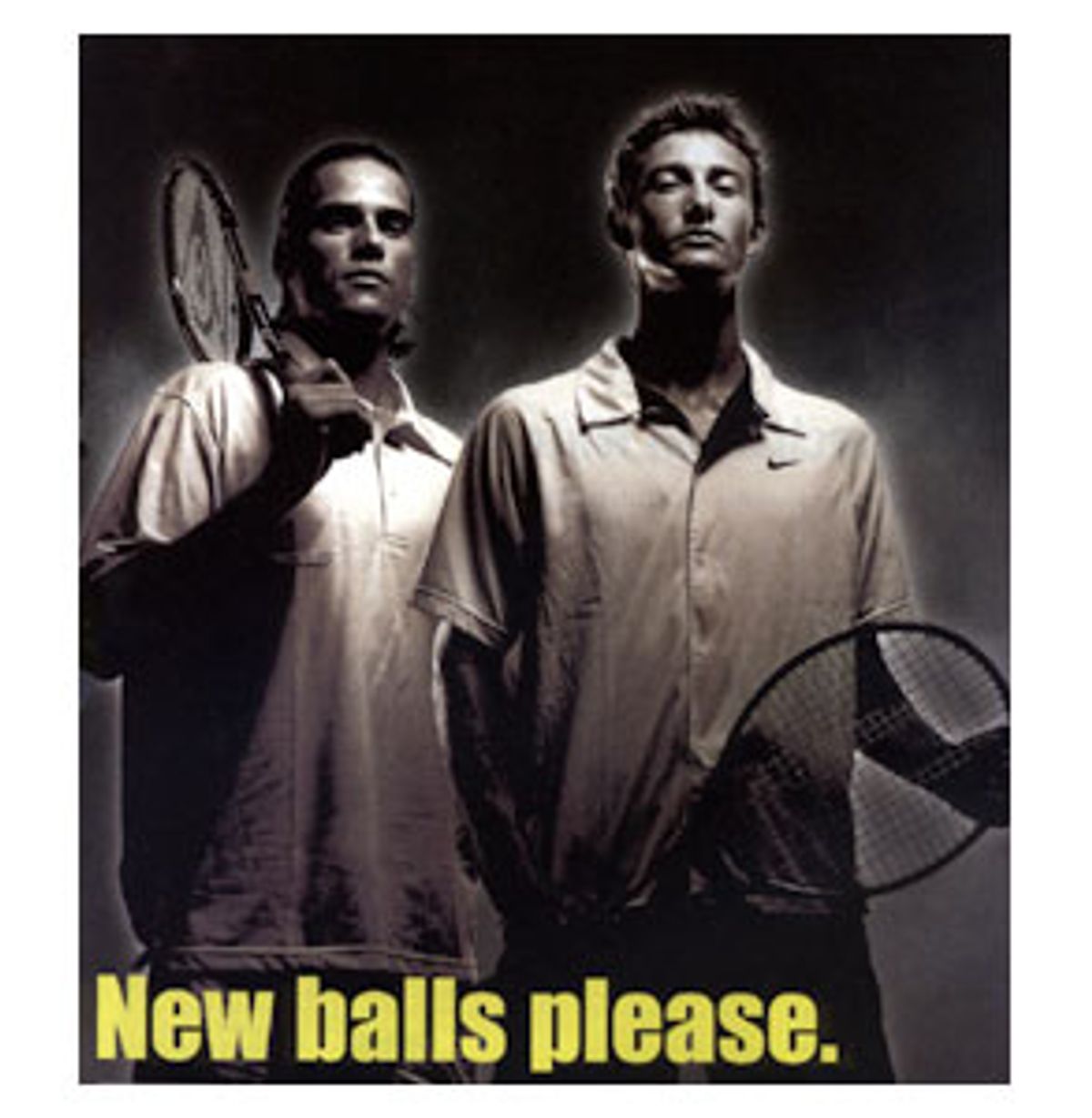 Maybe you've seen the ads, the black-and-white photos of chisel-faced tennis players gripping their rackets in gladiator-like poses. But unless you're a serious tennis fan, these athletes -- Gustavo Kuerten, Lleyton Hewitt, Juan Carlos Ferrero and Tommy Haas -- might not register as hot, up-and-coming stars.

Men's tennis desperately needs that to change. The two brightest lights of the game's old guard, Andre Agassi and Pete Sampras, are aging, and so far, no one else on the men's tour has achieved their magnitude of appeal. The problem is particularly worrisome in the United States, where tennis already is overshadowed by other sports, and TV audiences tend to tune in only when big names are smashing serves.

That's why the ATP Tour, which oversees the men's tour, is trying to "celebritize" its next generation of top 10 players with a splashy new ad campaign, fittingly headlined "New balls please."

"Research has shown that the public wants to learn more about the young players, so our goal was to show the strong attitudes of the new blood, and to try to make them slightly godlike -- like gladiators in a duel," says Ailana Kamelmacher, a spokeswoman for Burson Marsteller in London, which created the campaign.

The marketing push comes at a critical time for the ATP Tour -- which last year raked in an estimated $62.5 million from tournament ticket sales, television contracts and sponsorships. That's up from $55 million in 1997. With so much money at stake and a slew of sponsors to please, the tour can't afford to let interest in the men's game slip. Last year, it signed a $1.2 billion deal with ISL Worldwide, granting the Swiss sports marketing firm 10 years of marketing, broadcasting and licensing rights to the ATP Tour, its prestigious Masters Series tournaments and the world championships. And ISL already has attracted impressive international sponsors such as Mercedes Benz, Fila and Newsweek -- all of which are betting men's tennis will lure even more fans in the next few years.

The slogan of the ATP Tour's marketing push may be a tad sensational. (Sampras, for one, sniffed that it's not his "cup of tea.") But the ads now appearing in Newsweek, USA Today, CBS and ESPN already have generated buzz.

At last week's Masters Series tournament in Toronto, hundreds of fans lined up for autographs from tennis's new stars, who were glorified on billboards throughout the city. And during ESPN's coverage of the event, commentators continually talked about the feisty young players making their way up the rankings. "Last night was a major changing of the guard," chimed ESPN commentator MaliVai Washington, referring to 20-year-old Marat Safin's quarterfinal victory over Sampras in three sets. "It shows that these young guns aren't afraid to take on the big guys."

But what happened in Toronto early in the week also reflects the challenges the ATP Tour faces as it unveils its new, high-profile marketing campaign around the world.

Although Safin, a hard-hitting and hunky Russian, claimed the trophy, most of the 11 other players featured in the campaign -- including Kuerten, Ferrero, Hewitt, Magnus Norman, Nicolas Lapentti, Nicolas Kiefer, Mariano Zabaleta, Roger Federer and Mark Philippoussis -- crashed out in early rounds. And aside from Kuerten, who recently won his second French Open, none of these "new balls" has won a Grand Slam tournament, the only events that truly capture the world's attention.

"It's no longer possible for someone to make it to the finals and semifinals every week," says ATP spokesman Graeme Agars. "The men's game has gotten so deep that a number of different players could win any given tournament."

That may be true, but it's confused members of the public, which savors battles between the same top warriors. Last year, the rivalry between 30-year-old Agassi and 28-year-old Sampras was rekindled when they competed for the Wimbledon final (Sampras won) and the ATP World Championship in Hanover, Germany, where Sampras won again. But aside from their memorable semifinal meeting at this year's Australian Open, where Agassi prevailed, the aging tennis stars have been plagued with injuries all year. After more than a decade on the tour, their bodies are breaking down, and every time either of them steps on the court, fans now have to wonder whether they'll leave the match without wincing in pain.

The ATP Tour can't afford to have Sampras and Agassi fans fade away from the game. Star power is at least partly responsible for a jump in ATP tournament attendance from 2.1 million in 1989 to 3.7 million last year. And the difference between a full capacity crowd at a tournament and an empty one can add up to big bucks, since ticket prices at some ATP events can be as high as $100. The only choice the ATP has is to market the heck out of the new breed. But it'll be a challenge, especially with finicky U.S. television audiences who tend to watch only familiar, big-guns play.

NBC's Wimbledon coverage of Sampras' historic victory this year was the highest rated men's singles final since 1995, while the USA-Czech Republic Davis Cup tie involving Sampras and Agassi was ESPN2's highest-rated tennis event ever. By comparison, the French Open final between Kuerten and Norman turned into a ratings bust for NBC, even though it was a thrilling match.

That's not to say there's no hope. Overall, pro tennis is on an upswing. Both the men's and women's tours reported double-digit attendance increases at last year's tournaments, and heartened by its Davis Cup coup, ESPN has added another 20 hours of tennis coverage to its 2000 schedule. But the men have been somewhat out-flashed by women players in recent years, with the Sanex WTA Tour successfully promoting players like Venus and Serena Williams, Martina Hingis and Anna Kournikova. Not only have these young divas made the covers of major magazines like Sports Illustrated, GQ and Forbes, but they're drawing droves of new fans to come watch them play.

"The men's tour is mimicking what the women did to get attention," says Joe Favorito, a spokesman for the United States Tennis Association. "People in the industry have liked the new campaign, but it has gotten some criticism, too. If anything, it has people talking, and that's good for the game."

After a "gazillion" meetings, Agars says the ATP Tour and Burson Marsteller came up with the concept for the "new balls" campaign, which debuted late last month. "One of the things we're trying to do is broaden tennis's appeal by showing off its new look, as opposed to promoting Sampras and Agassi, who are at the business end of their careers," Agars says. The ATP Tour won't say how much it spent, but Agars admits it's one of the tour's biggest marketing campaigns ever.

For their part, the dozen players selected for the spread readily agreed to play gladiators for their photo shoots, and overall, they seem to like the attention. "I think it's a good idea on the ATP Tour," says the 20-year-old Hewitt of Australia. "You have sort of the high guys up there, the [Patrick] Rafters, Agassis, the Samprases, and then the new guys 23 and under sort of coming up, sort of biting at their heels."

So what does the old guard think of the campaign?

Agassi diplomatically commented that it's "good to introduce the players to the public or the public to the players." But Sampras, who did acknowledge that marketing young players is a good idea, was a bit more critical: "They could probably find a better slogan."