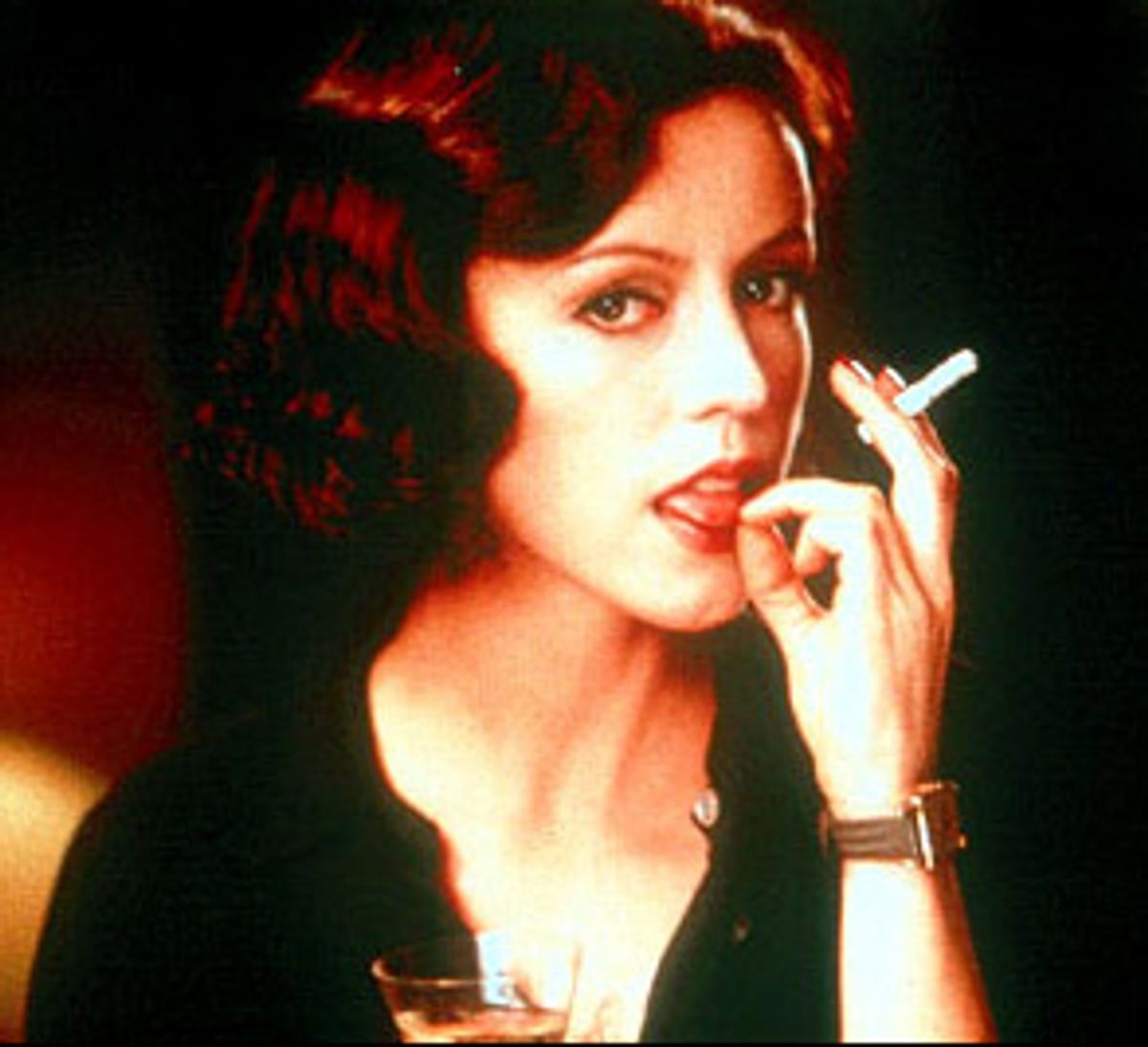 "Aimie & Jaguar" has a solid, compelling subject. It tells the true story of a Jewish woman passing for gentile in Nazi Germany who falls in love with the wife of a Nazi soldier. (The title comes from the nicknames the lovers give each other.) The film, a debut from German television director Max Fdrberbvck, isn't up to the complexities the story raises, but it's a consistently engrossing piece of work.

The story first came to the public's attention in 1994 when Lilly Wust, the German woman who was "Aimie," told her story to writer Erica Fischer, who turned it into a bestseller. (Wust, who's now 86, still lives in Germany.) Fdrberbvck has chosen to tell the tale as romantic melodrama, focusing on the love story more than the historical background. The danger of using melodrama for real-life tragedy is that the heightened emotion of melodrama, which is so compatible with the appeal of movies, risks turning historical events into soap opera. It can be done effectively. Regis Wargnier's current "East-West" uses melodrama to depict the horrors of the Stalinist USSR. But Fdrberbvck hasn't learned the narrative command Wargnier shows, and "Aimie & Jaguar" isn't nearly as satisfying.

Still, Fdrberbvck's missteps never trivialize Nazism. An early scene shows Berliners hiding in bomb shelters during an Allied air attack. It's impossible not to have sympathy for people being bombed from the skies. And yet I confess to the scene making me initially uneasy. Was this going to be one of those movies where Germans are innocents caught in the madness of their leader? Thankfully, no. Almost immediately, amid the rubble, Fdrberbvck shows Jews being rounded up for transport and any thought of German innocence vanishes.

The movie's greatest strength is Jaguar, the real Felice Schragenheim. She's played by Maria Schrader, who combines the downturned mouth and world-weary eyes of Jeanne Moreau with the nearly birdlike physique that the young Jessica Harper had in pictures like "Suspiria" and "Pennies From Heaven." There's nothing fluttery about her, though; she's an iron-willed sylph. Posing as a gentile for a Nazi newspaper's anti-Semitic editor (Peter Weck), Felice gets a kick out of being a daredevil, even assisting with his most virulent editorials. She hasn't been untouched by the war; her parents have been taken away. But she's one of those people who come to life fully under risk.

There's a special kick in stories of Jews who fooled Nazis into thinking they were gentiles, the thrill of seeing Hitler's crackpot racial theories turned into hash. In Agniezska Holland's "Europa, Europa," the teenage Jewish hero living in a school of Hitler youth is called before his class by a teacher who absurdly pronounces that he possesses the dimensions of the perfect Aryan skull. That's the kind of idiocy Felice's boss subscribes to. He inveighs against Jews while having nothing but praise for her capabilities and charm. (Fdrberbvck is smart enough to portray this big-shot Nazi as a human monster: He's kind to Felice and frankly admires her beauty without leering.) Schrader is too subdued at times, but the ironic smile that plays around the corner of her mouth tells you she enjoys fooling this man. And that desire to put one over is the core of her initial attraction to Lilly (Juliane Kvhler).

Being a Jewish lesbian means, of course, that Felice is doubly at risk with the Nazis. She's the boldest of her friends, who are all also Jewish lesbians. None of them can lay aside her fear in the way of Felice, whose bravado is never far from the surface. (But as Felice's friend Kldrchen -- Klara in the English subtitles -- German television personality Heike Makatsch, with her ripe, generous features and thick sensuality, makes a stronger impression as an actress than anyone else in the movie.) Felice meets Lilly through her girlfriend Ilse (Johanna Wokalek), who works as Lilly's housekeeper and who has told Felice that Lilly has claimed she can "smell Jews." Teasingly, Felice sets her sights on drawing Lilly into her circle and seducing her. She doesn't count on falling in love.

Lilly Wust had been honored by the Nazis for producing four Aryan boys; her husband, G|nther (Detlev Buck), is a soldier at the front. But Lilly's dedication to the German cause is skin-deep, if that. Felice defends Lilly by saying, rightly, that she married young and never gave a thought to anything beyond being a wife. She supports her husband when he goes to war because that's what wives do (though it doesn't stop her from having an affair with a German officer).

Kvhler has some fine, funny moments of shock during a birthday party Felice and her girlfriends throw for her. But Lilly is the movie's major flaw. In the opening sequence, a framing device for the entire film, Inge Keller plays an older Lilly. Yet the movie never resolves how the silly, shallow, young Lilly could develop the strength of character visible in the face of the older woman. The tension of the film derives from the way Felice, lost in love, puts her life needlessly at risk, and how Lilly, never thinking beyond the joy of her sexual and emotional liberation, endangers Felice. (When G|nther discovers the affair, Lilly blithely announces she's going to get divorced, never thinking how it would put Felice at risk to be named in a suit.)

Kvhler is true to the movie's conception of Lilly, but that means being as bland as a Weimar version of a '50s TV mom. It's never clear why Felice falls for her, and the disparity between the awareness and courage of these two women gets in the way of our emotional involvement. Lilly doesn't grow as a character. She remains utterly oblivious to the danger she causes Felice. We don't want to see that brave marvelous girl throw herself away for this chipper little house-frau.

There are other problems. The movie needs more of the flavor and details of the everyday life of Nazi Germany. Though this is a story about two people using love as a refuge from the world, Fdrberbvck's failure to include that information makes him seem, at times, as blinkered as Lilly. The trembling apprehension of the pair's first lovemaking is surely emotionally accurate. But Fdrberbvck presents the scene with a solemnity that overwhelms any sensuality.

He's also a careless storyteller. We see Felice passing information to a man who is never identified, and the movie never addresses the extent of her involvement in the resistance beyond showing that she knows how to secure false passports for her girlfriends. I wish Fdrberbvck had found some way to include Lilly's later sheltering of three Jewish women toward the end of the war. That's exactly the kind of emotional development the character cries out for.

But there are surprising flashes of humor. At the beginning, when the older Lilly is shown to her new residence at a retirement home, Fdrberbvck shows her eyeing the rump of the comely young thing who's escorting her there. And there's a choice gag during a bombardment at the symphony, when terrified musicians scramble for shelter and the tyrannical conductor announces, "No one leaves in the middle of a movement."

The virtues of "Aimie & Jaguar" may be more a matter of what Fdrberbvck doesn't do wrong than what he does right. Though this is a stumbling film, it's not a negligible one. It's a small reminder that nearly 60 years after the fact World War II doesn't seem near to yielding up all the stories it has to tell.