John Waters exploits the Patty Hearst story for a billet-doux to movies good and bad, schlock and art. 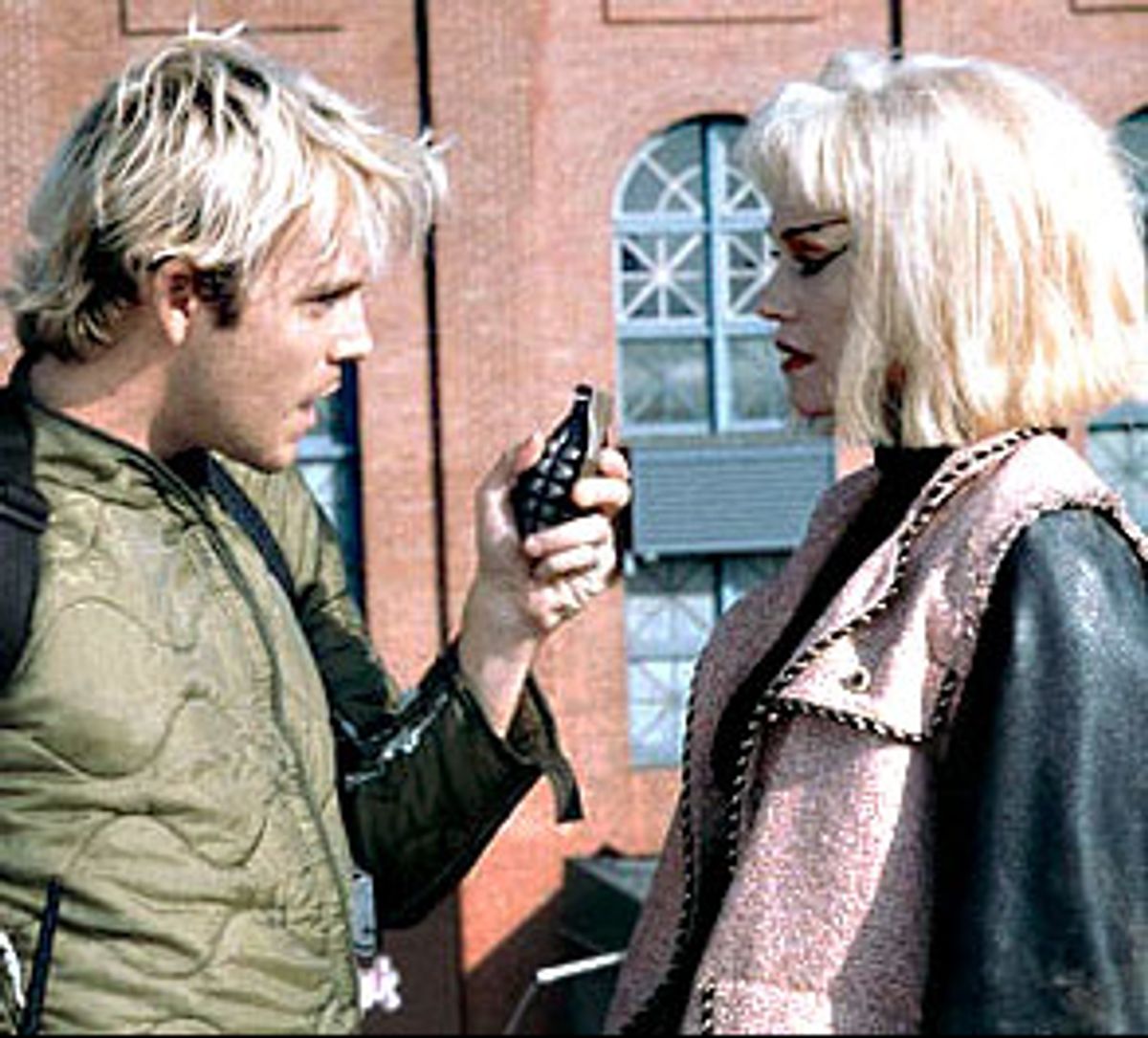 Sometimes you have to wonder how he does it. It should be in shockingly bad taste for John Waters to make a movie about a kidnapped starlet that's modeled on the still-touchy Patty Hearst case. Then again, Waters, although he has always been proclaimed otherwise, isn't really about bad taste. He isn't so much an arbiter of tackiness as a walking, talking answer to the question of what happens when you cross bad taste with openhearted, unadulterated, go-for-broke love.

In "Cecil B. DeMented," a gang of underground-film kids led by Mr. DeMented (Stephen Dorff) captures stuck-up movie star Honey Whitlock (Melanie Griffith) and forces her to star in the kids' no-budget movie. Dorff, who has "Otto Preminger" tattooed in Gothic script on his forearm, is a rebel nut case who's ready to sacrifice his life to bring down mainstream cinema, which Honey represents in a big way. "One day you'll thank me for saving you from your bad career," he tells her, a howlingly obvious echo of the way the Symbionese Liberation Army tried to save Hearst from being a tool of the establishment by making her a tool of its own.

But "Cecil B. DeMented" isn't in poor taste at all -- well, OK, that's if you discount the scene in which a porn star coos with delight as a gerbil wriggles up her ass. "Cecil B. DeMented" may look like "Natural Born Killers" with movie cameras and clapper boards instead of guns, but it's cheerfully free of nihilism and despair. This is a sweet-spirited movie about a nice bunch of kids having good clean fun (only one of them ever shoots up), something like Waters' own "Hairspray" reimagined by Quentin Tarantino if he had a better sense of humor. It's just like Waters to write and direct a billet-doux, and "Cecil B. DeMented" is nothing if not a billet-doux disguised as a garish exploitation flick decorated with glimmers of sex and violence.

Before we go any further, it's important to note that the Hearst parallel is milked with such excessive good humor that by the picture's end it registers as anything but tacky. (Hearst has appeared in several of Waters' films, and she has a role in this one as well.) The Hearst conceit, beautifully executed as it is, is just a framework for Waters to hang his devilish ideas in. "Cecil B. DeMented" is clearly Waters' homage to the meat grinder of good movies and bad, schlock and art that made him what he is today.

Waters, a Baltimore native who got his start making movies on the run with virtually no money and even less shame, treats Cecil's outcast posse, known as the Sprocket Holes, like a group of gifted runaway teens. They all live together with Cecil in an ultramod Baltimore pad, decorated with tattered film memorabilia and other objets -- it looks like a cross between the Beatles' house in "Help" and the set of the "Banana Splits." And they're all hardcore movie fans, each one marked with a tattoo proclaiming an affinity for a director. Raven (Maggie Gyllenhaal), the cheerful Satanist makeup artist (she wears a T-shirt that reads "I [heart] Satan"), has "Kenneth Anger" marching across her sternum. Porn star Cherish (played with dazzling, gutter-mouth charm by Alicia Witt) is adorned with "Andy Warhol" (though "Russ Meyer" would have been an equally good choice). Lewis (Larry Gilliard Jr.), the staple-gun-obsessed art director, sports "David Lynch," written out with one letter on each knuckle ` la "Love/Hate" on Robert Mitchum's hands in "Night of the Hunter."

The in jokes for movie nerds fly fast and furious, and Waters -- despite the fact that his timing often tends to be lax -- works them so broadly that just about every one of them sings. One of the characters in the gang's movie-within-a-movie is the owner of an art house cinema who's too excited about his retrospective of a famous Italian director to countenance the idea that his theater is facing bankruptcy. "What?" he asks rhetorically with unvarnished anguish and bewilderment, "Pasolini's playing and we have an empty theater?"

Waters (working from his own script) is shameless in the way he lampoons not just the stupidity of Hollywood fare but also the sanctimoniousness of the indie-film community. Dorff, wandering around his movie's set in a modified straitjacket, its sleeves and straps dangling, makes for a very cheerful and charming cult leader -- he's got just the right moonbeam glint in his eyes. The fact that he doesn't care if his artistic statement makes money, or even if he dies in the process of making it, is coded not so secretly in his Charles Manson-like proclamations: "I'm a prophet against profit" and, my personal favorite, "We believe technique to be nothing more than failed style."

The movie is most entertaining in its first half, when Waters has a ball reeling off the bad-boy bons mots and reveling in pandemonium as Cecil and the Sprocket Holes invade various settings for their film, dragging with the the reluctant and ever-snippy Honey Whitlock, who's slowly but surely being converted to their ways.

Waters can't sustain the same level of intense but freewheeling energy in the second half -- the action there becomes a bit too manic. But "Cecil B. DeMented" never drags, partly because you just can't wait to see who or what Waters will go after next: Will it be suburban theaters that book only wholesome family pictures or the Motion Picture Association of America? He piles on one wacky notion after another, and somehow they stack without toppling. At one point Cecil and his clan storm the set of a Hollywood picture that's being made (where else?) in Baltimore, a sequel to "Forrest Gump" called "Gump Again" and starring Kevin Nealon, who appears as himself. Blood and mayhem erupt. No one will be allowed to leave the theater during the terrifying Teamster-stapling scene.

Best of all, Waters knows just what to do with the once-delightful ("Working Girl," "Something Wild") Griffith, who in recent years has barely managed to survive a string of dreadful movies ("Crazy in Alabama"), not to mention some bad encounters with a collagen syringe. She's freer and funnier here than she has been in ages, winning us over from the first frame: Pre-kidnapping, her Honey Whitlock has been brought to Baltimore for a benefit/movie premiere of her latest ultra-Hollywood effort, "Some Kind of Happiness," and she can't be bothered with the gauche tastes of the locals. When a white limo pulls up instead of a black one, she lashes out at her trembling assistant (Ricki Lake), "Do I look like goddamn Liberace's boyfriend?" Clad in trim movie-star dresses, her body looks terrific, but her face, divided by a gash of plum lipstick, gives her the appearance of an aging actress who's fading fast and holding on tight.

Of course, once Satanic makeup artist Raven gets ahold of her, she looks even worse -- until you get used to the shiny psychedelic arcs that used to be her eyelids, and you realize she actually looks better this way. She's suddenly full of life, as if she'd just gotten a bride-of-Frankenstein jolt of juice. In "Cecil B. DeMented" Griffith wears the most outlandish looks well (you can't beat a pink Chanel tweed jacket with the sleeves ripped off, worn over black leather), and it's a clear case of confidence radiating from within.

And like the rest of the cast, she's funny as hell, calling in bloodcurdling tones for Jack Valenti (head of the MPAA) as Cecil's henchmen cart her off, kicking and screaming, to their lair. But if you think that, like a bad trailer, I've given away the best jokes in "Cecil B. DeMented," you're, well, demented. I haven't even begun. And for those who still haven't stopped wadding their hankies over "Cinema Paradiso," I nominate "Cecil B. DeMented" as one of the tenderest love letters to cinema ever written. From his heavenly perch, Sam Peckinpah (whose name graces the arm of the D.P. in "Cecil B. DeMented") is surely looking down on it with pride and pleasure -- although he may be wondering why Waters didn't use more squibs.