Stephen Dorff and Alicia Witt discuss the lens licking and depth of "Cecil B. DeMented," John Waters' most recent lunacy. 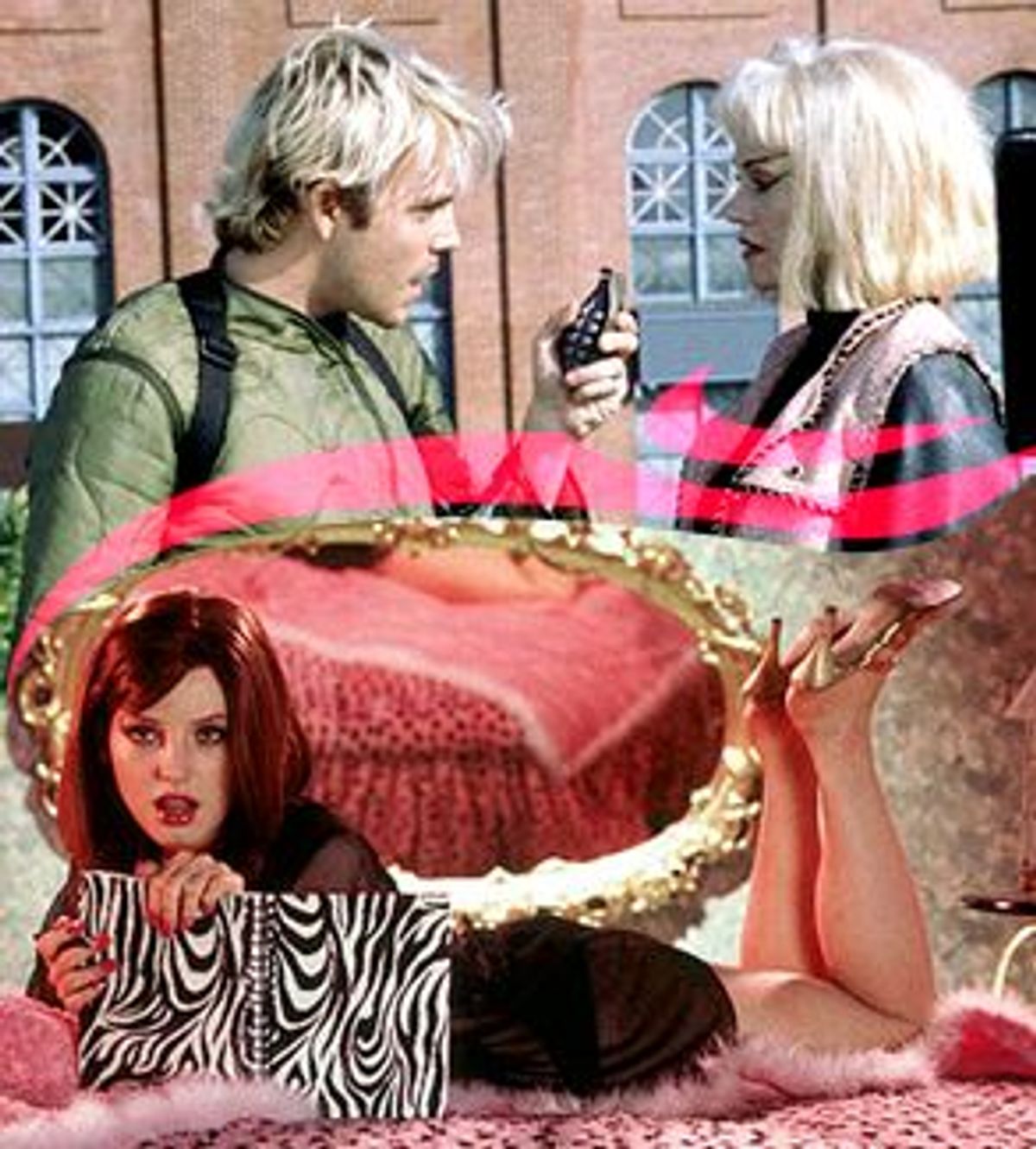 Stephen Dorff is ashing his cigarette into the orchid pot and talking about how you don't get rich starring in films like "Cecil B. DeMented." It's the first leg of the movie's press tour and the much-maligned young star is living up to the dubious reputation he established with his first interview ever, in which he claimed his superiority to most of his contemporaries -- and then went on to name names.

Take a good look at Dorff's track record and you'll find that, at 27, he not only has worked with some of the best actors around -- Jack Nicholson, Harvey Keitel, Susan Sarandon -- but has consistently taken interesting and risky roles, most notably with his performance as transvestite Candy Darling in "I Shot Andy Warhol." When he tells me he does these films not for the money but because they challenge him, it doesn't sound like the usual actor's rhetoric.

There is something charming in the earnest way he tilts his head as he speaks, in the flush of his cheek, in the way he sits eagerly at the very edge of the linen-covered couch as he talks excitedly about his new role. Under the hard-shelled veneer of 10 years in the Hollywood gristmill, I glimpse something that looks surprisingly like innocence.

It must have been just this mix of pomp and sincerity that John Waters spotted when he was forming Cecil, which the director wrote with Dorff in mind. Playing the leader of a group of radical cinema terrorists, Dorff shines as the movie's title character, a man driven by a rabid passion for cinematic purity and an unstoppable lust for the perfect shot. "Cecil" promises to put pie in the eye of anyone who scoffed at Dorff's talent. And the girls are sure to swoon because, damn, the man looks great in jodhpurs.

How was it working with John Waters?

He's awesome. I met him four years ago and he always said he liked me. And then I was making "Blood and Wine" with Jack Nicholson and he offered me Cecil, and I wanted to do it. But it ended up falling apart; I think he wanted $20 million to make it. I would see him once in a while and he would say, "We're going to make it!" He was just really loyal to me; he said he wrote it with me in mind.

The character of Cecil is really funny. The challenge was to not make it camp, but to believe in everything I said. I really got a kick out of it. Some of my representatives were a little nervous, but I think most of those people aren't very creative. They're probably better at putting deals together.

How do you feel about big Hollywood films?

What's great about John is that even when he trashes a film like "Forrest Gump" or "Patch Adams -- The Director's Cut," he instills such humor in it, I think the filmmakers would understand it.

John is the first person to admit that he loves Hollywood movies. I think "Magnolia" was John's favorite movie last year. If it weren't for Hollywood, he wouldn't be able to make this movie.

Were you familiar with the directors that each member of the gang [in "Cecil"] has tattooed on their bodies?

No. I knew the obvious ones, Almodóvar, Spike Lee, Peckinpah. The one I wasn't familiar with was the one I wear: Otto Preminger. I had never seen any of his movies. I asked John who he was and he said, "He was a dictator; he used to beat his actors!" And I said, "Oh, OK."

One thing in the script, which I was a little weird about, was licking the camera. And that's the ending shot in the trailer, the whole look for the film. When I first read that in the script I was like, "You want me to lick the camera?" and John said, 'That's right, I want you to lick the Panavision logo and then give a demented look." And I was like, "OK. Can I get some Windex?" But he had this image in his head and he really wanted me to do it. I actually like it now.

Had you seen John's other films?

I had seen "Pink Flamingos" and "Hairspray" and all the later ones. [Waters'] whole story is amazing ... John's parents financed his first films. They believed in him and supported him, even though he was making the craziest shit anybody had ever seen, coming up with the most brilliant stuff ever.

I enjoy making movies for people like that. I mean, you don't get rich from this kind of stuff, but that's not what's important to me.

They'll just hire anyone to be in movies these days, where before it was the same five or six guys you'd always go up against. It would be me, Leonardo, Ethan Hawke, a few other guys. Now there are 18 billion kids from the WB. Great actors, like my friend Joaquin Phoenix, who I think is one of the best actors around -- we're both losing parts to kids we've never even heard of. Things have changed. But at a certain point you have to sit back and look at what you've done and have faith that the directors that you want to work with will want you.

Alicia Witt, who plays Cherish in "Cecil B. DeMented," made her film debut in David Lynch's sprawling sci-fi flick "Dune," and has gone on to a stint on "Cybill" and several other quirky roles in well-made independents. In lean years, Witt made a living playing the piano at the Beverly Regent.

The 25-year-old has chosen her characters carefully, steering clear of the false vulnerability and delicate manipulation routines -- quite a feat considering the limited roles Hollywood deigns to offer young actresses. Instead, Witt has held out for parts with depth, gumption and a little outrageousness. Perhaps the most memorable moment of her recent career was "Fun," which featured Witt experimenting with lesbianism, killing people and refusing to apologize for either.

It was amazing. It was such a fun, free, amusing experience. John's so intelligent and he's the sweetest, nicest person on the set. He took genuine interest in everything that was going on with us.

I was also surprised because I hadn't seen many of his films and I thought he was going to be one of those directors who are very specific in their direction. But he wasn't like that at all. He did a rehearsal progress and made it clear what sort of characters we were playing, and from there, he just really let us run with it.

How did that differ from what you're used to?

It was just easy. It was just having a good time and telling a fun story. And John seemed perfectly relaxed, although I know he had a million things going on and it was probably the most complicated movie he ever made.

It's wonderful and in many ways I think it's a real culmination of his past films. It echoes his own experiences in a way, although I know he hates people reading autobiography into his films.

I think this film probably depicts that. It shows what he jokingly says is what he would have become had he not had the support of his parents when he was first starting out. It takes the idea of having a vision and being passionate about your vision one step further into a cult mentality.

I can imagine that as an actor the solid roles are few and far between.

I read so many things. I have no desire to play the typical girlfriend/sidekick role. Those characters exist to move the story along and that's it. And I don't care how much back story you invent in your own mind to bring something special to the character, it's just not fun to play a character that isn't realistic, that's one-dimensional. I like playing characters that are unusual and that challenge people.

Are there certain directors you'd like to work with?

John has been on my list forever. To me it was very lucky that I ended up in the movie at all, because when John was here auditioning, I was out of town. So I went on tape. The first time I met him face to face was when I went to Baltimore to begin shooting. So it was something about that tape. I was so happy.

I really want to work with Carl Franklin. He directed "One True Thing" and "Devil in a Blue Dress" with Denzel Washington. He's a very gifted director. I had an amazing meeting with him and I was so impressed with the performance he got out of me the hour that I spent with him in his office -- this incredible energy I felt inside myself, like I snuck outside of my body. I just have to work with him someday.

I would love to work with Woody Allen because he's just a legend. His films are so funny and sad at the same time. He hits upon some fundamental truth. I would love to work with Martin Scorsese and Joan Chen. And Leonardo DiCaprio. People don't give him the credit he deserves. It's all been overshadowed by the teen idol status, but he's so good; he's subtle and real.

Were you familiar with the directors John places in "Cecil"?

Not all of them. I didn't feel as though Cherish needed to be familiar. She's by far the most superficial of the group. I always felt like Cherish was worried that her boobs didn't look quite right or her nails were going to chip ... I just had so much fun with that character. Everyone was into their characters. Hopefully, on film, it comes across as a big group of bizarre and deep characters. I loved playing Cherish.