It's Splitsville in Long Beach

The short-lived marriage between Perot loyalists and Buchanan supporters is officially annulled at the Reform Party Convention. 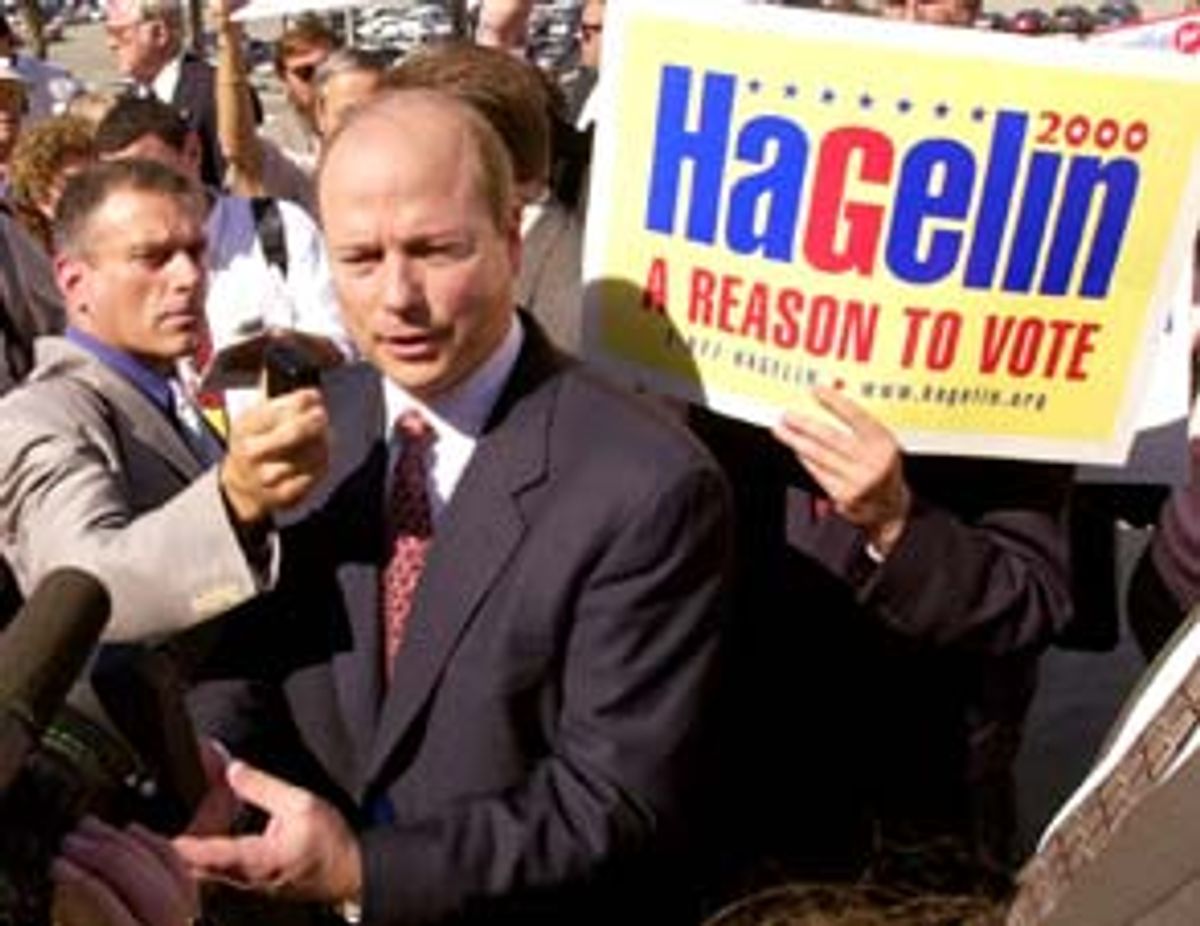 Reform Party leaders gathered in Long Beach Thursday to nominate their presidential candidate, but instead they officially split their party in two. Now, the people who once followed Perot are asking the Federal Election Commission to put this mutant, Humpty Dumpty of a party back together again.

Watching the mitosis of Texas billionaire Ross Perot's political brainchild isn't pretty. But it's not hard to see why these two groups don't get along. The troops supporting Pat Buchanan are all the folks whose absence the media bemoaned at the Republican Convention in Philadelphia, where the culture wars were shelved in favor of George W. Bush's spoon-fed message of inclusiveness. One delegate proudly waved a Rebel flag; another preached in the hallway that "lost people, when they die, go to hell." The party chairman pointed to a Costco warehouse store across the street and bemoaned the presence of "communist Chinese on U.S. soil."

The other side is composed of Perot loyalists and Natural Law Party refugees who would seem more at home in bohemian Venice Beach than Long Beach. Many of them, including John Hagelin, the presidential nominee they are pushing as an alternative to Buchanan, are past or current followers of the Maharishi Mahesh Yogi. Others are independent-minded political crusaders who say they are fed up -- either with the two-party system, Buchanan's right-wing positions, or both.

But in some ways it makes sense that these two posses are housed under the political roof designed and constructed by Perot. Buchanan can be seen as the heir to Perot's sound-bite-ready political oration, his irascible personality and much of his egomania. Hagelin represents Perot's flightiness, his political naiveti and the rest of Perot's egomania.

The split between the two groups became official Thursday when old-guard Perot loyalists -- led by Reform Party national secretary Jim Mangia, Perot spokesman and former national party chairman Russ Verney and Hagelin -- marched into the Long Beach Convention Center with 200 or so supporters in tow and demanded to be seated as delegates.

When national party chair and Buchanan loyalist Gerry Moan rejected their request, the group marched out and set up shop around the corner, preparing a parallel convention. So while Buchanan formally receives the Reform Party nomination at the Long Beach Convention Center this weekend, John Hagelin will also formally receive the Reform Party presidential nomination at the Long Beach Performing Arts Center.

"We've never had to do anything like that before," said FEC spokeswoman Sharon Snyder. "This would be a precedent-setting event for the commission."

Moan says that the Buchanan party at the convention center is the real deal. "The problem the other side seems to have is a problem with democracy," he said. "In a democracy, whoever has the most votes wins, and they don't seem to like that."

"If the FEC held up these funds after we fought, bled and died to build this party ... then they will be passive conspirators in the denial of democracy in America," Buchanan said.

Buchanan forces were thought to control at least 70 percent of the convention delegates before the Hagelin faction stormed out. But Mangia says Moan and Co. ran roughshod over Reform Party rules, and illegally credentialed Buchanan supporters as delegates to ensure the conservative television commentator had full control over the convention.

But Mangia says the group at the Performing Arts Center is the true Reform Party. "We tried to get in, and they wouldn't let us in," he said. "And I'm the national secretary of that group." Mangia said his Reform Party has unanimously elected him national chairman.

With all the back-room maneuvering and behind-the-scenes intrigue, the party's mail-in primary seems to be little more than an afterthought. Both sides have said the process is flawed, but for very different reasons. Hagelin claims that Buchanan sent ballots to his past donors, who were not eligible to vote in the Reform Party primary. Buchanan forces have cast suspicion on the way the mail-in primary process was handled, providing their candidate with wiggle room to overturn the election results should Hagelin pull off an upset. Under Reform Party rules, the ballot result can be overturned with the support of two-thirds of the convention delegates.

"I think we're going to win that ballot, but I have heard that it's been a bizarre process," Buchanan said in a press conference here Thursday. "There have been some stories of people receiving two or three ballots. I'd like to leave it up to the convention to decide what to do."

But Hagelin's allies are clinging to the mail-in ballot, hoping their candidate will pull off an upset victory and further bolster their claim with the FEC. "The primary results are the one wild card the Buchanan people can't control," said Lenora Fulani. "We're here to ensure that the democratic process of the Reform Party is protected." Fulani, who is supporting Hagelin, took her 32-member delegation to the Buchanan convention to try to force his group to release the election results.

But Thursday the Buchanan troops unseated Fulani and her crew. And by mid-morning, much of the drama had already faded. The two sides seem to have agreed to remain separate for most of the weekend, with neither conceding the legitimacy of the other. When the opening gavel fell at the Performing Arts Center, it felt more like a poorly attended high school assembly than a presidential nominating convention. And as the event finally got underway Thursday afternoon, about 200 people sat in the first few rows of a hall built for more than 2,000. They applauded politely when they heard something they liked, but there was none of the hooting and hollering that typically marks a political convention. The place was so empty, in fact, that as speakers addressed the hall, the P.A. system echoed.

Meanwhile, Buchanan called an afternoon press conference where he distributed the text of a taped speech that will be played at the Buchanan faction's convention this evening. The speech focuses on America's "moral decline," referencing abortion and homosexuality, and quoting Ronald Reagan, Harry Truman and Alexis de Tocqueville.

"Rampant homosexuality, a sign of cultural decadence and moral decline from Rome to Weimar, is celebrated as our First Lady parades up Fifth Ave. to share her 'pride' in a lifestyle ruinous to body and soul alike," the speech reads. "The Democratic Party does not even perceive a moral crisis, while the Republicans slip silently out of the Camp of Life to seek a separate peace with the Log Cabin Club."

But Thursday's formal Reform Party was calm by what has become the party's standards. Earlier this week, there were physical altercations between the two groups, and nasty bouts of taunting and name calling. Not so Thursday, as Hagelin supporters marched in to a subdued chant of "Reform!"

Buchanan supporters, under strict orders from Moan, also remained subdued for the most part. "Where are your carpets at?" asked one man in a "Go, Pat, Go" T-shirt, tormenting the Hagelin faction. "You guys are supposed to be floating, or levitating."

The Hagelin forces say privately that the two Reform Parties are like runaway trains headed for each other on the same track at full speed. But Buchanan had a slightly different analogy. "John Hagelin is a log that has been thrown on the railroad tracks of a runaway express train," he said. "There's no way they can stop this thing."