The sexy part in life, and films, is the intersection of fact and fiction. 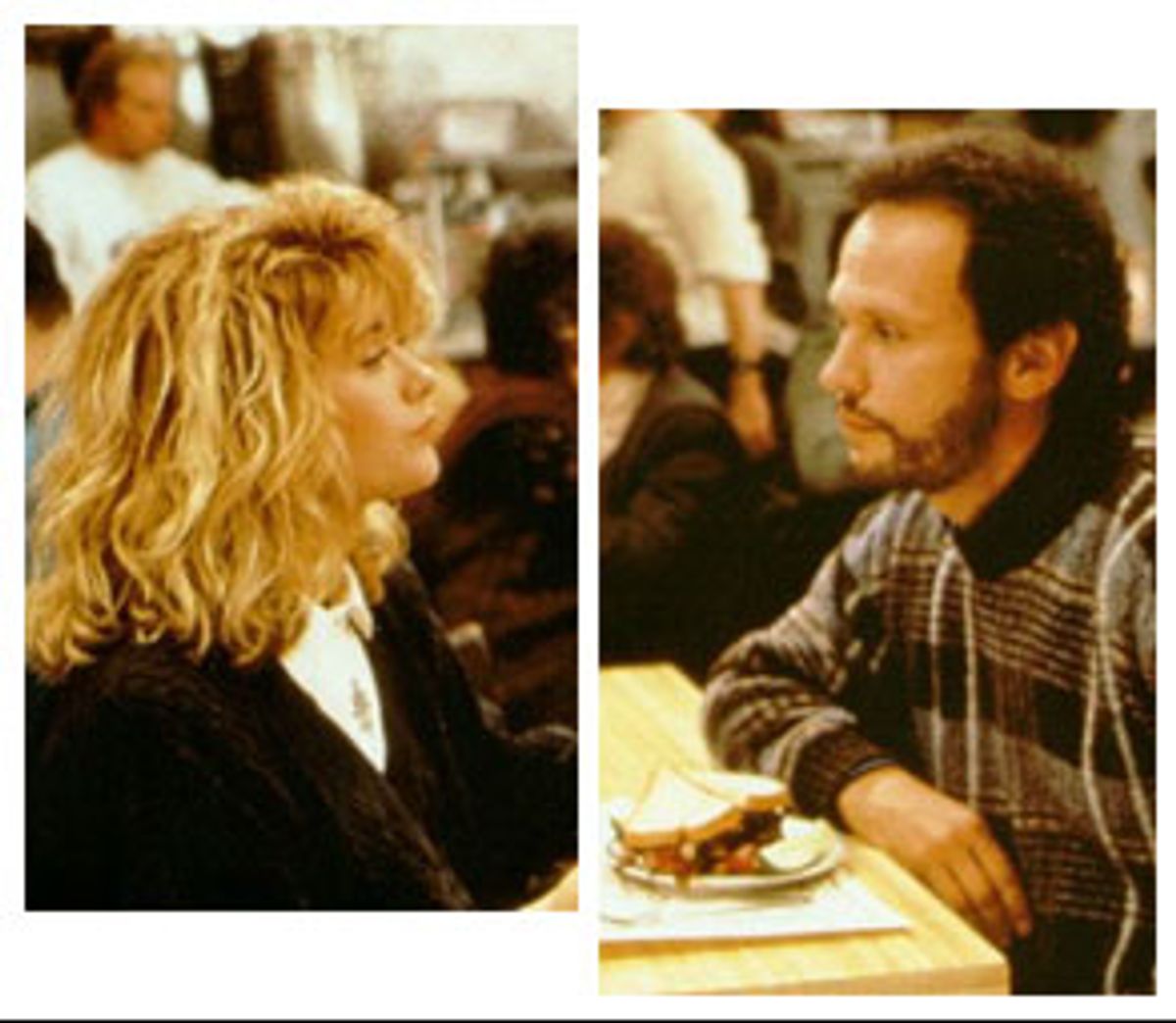 Last week, talking about "Girl on the Bridge," I mentioned the curious prologue to the film in which the female character is "interviewed" -- or is it the actress herself, Vanessa Paradis, talking about the character? I said then that I thought there was something very sexy and modern in that small confusion or overlap. Sexy because it's like being teased by twin sisters when you can't remember which one you're married to. And modern because in an age when the celebrity interview has become so common a form, we have all been affected: We talk to ourselves as if we were being interviewed.

Well, one thing led to another, and I thought of that scene in "When Harry Met Sally." They're in a crowded delicatessen and the subject of the female orgasm comes up. Harry (Billy Crystal) says there's no fooling him -- he's quite confident that his conjurings have prompted the real thing in women. Oh, really, says Sally (Meg Ryan), and she goes into a full, simulated, shapely orgasm, in front of everyone. Her point is that, plenty of times, women are faking it. Which leads us back to my first question -- are you in love with a real person or an actor playing the part?

And which would you prefer?

There's a lot in our upbringing and our faith in divine, spontaneous nature that cherishes the "real" thing. But what is the real, authentic way of having an orgasm? Watching Ryan again in the movie (no hardship -- I've always liked her, and she looks so young and pert here, so full of hope), I saw that she delivered what you might call a consensus, user-friendly orgasm. If you took a poll of 100 people and asked for the noises, the rhythms, the words, the whatever, that signify coming, you'd get what she does. In other words, it's a touch formal and impersonal.

I'll guess that Ryan didn't want to give away something she does -- some squeak, some groan or prayer, or something far more unexpected. After all, you hear stories of men who cannot come without farting, breaking into Schubert lieder or doing the signature song of the Michigan marching band. And do you really want that soundtrack every time?

Or is the orgasm actually a display we put on for others -- to reassure them that we have been pleased? A kindness, a mark of good manners? Shouldn't it be what everyone reads as an orgasm, to avoid doubt or dismay?

Where does spontaneity, or helpless reaction, sit in all of this? Of course, very few of us have had a sufficient variety of orgasms to match a poll's finding. But polls don't ask, "What do you do when you come?" Is this because it's too private? Or supposedly too far beyond control or description?

Are we "abandoned" -- deserted by our sense? Or is coming for most of us a set of friendly, generous signals, an attempt to indicate the extremity of being unfettered? You say it varies? All well and good. But I suspect we go to bed with actors and actresses. Just as, the rest of our time in life, we are with people who are trying to tell us a story. It's when we slip from one to the other, from fact to fiction, that I get excited. As the onlooker says in the delicatessen when Ryan's rendition has subsided, "I'll have what she's having."