A little off the top, please

There are certain things in life that are too painful to think about, like the day I got a circumcision at age 34. 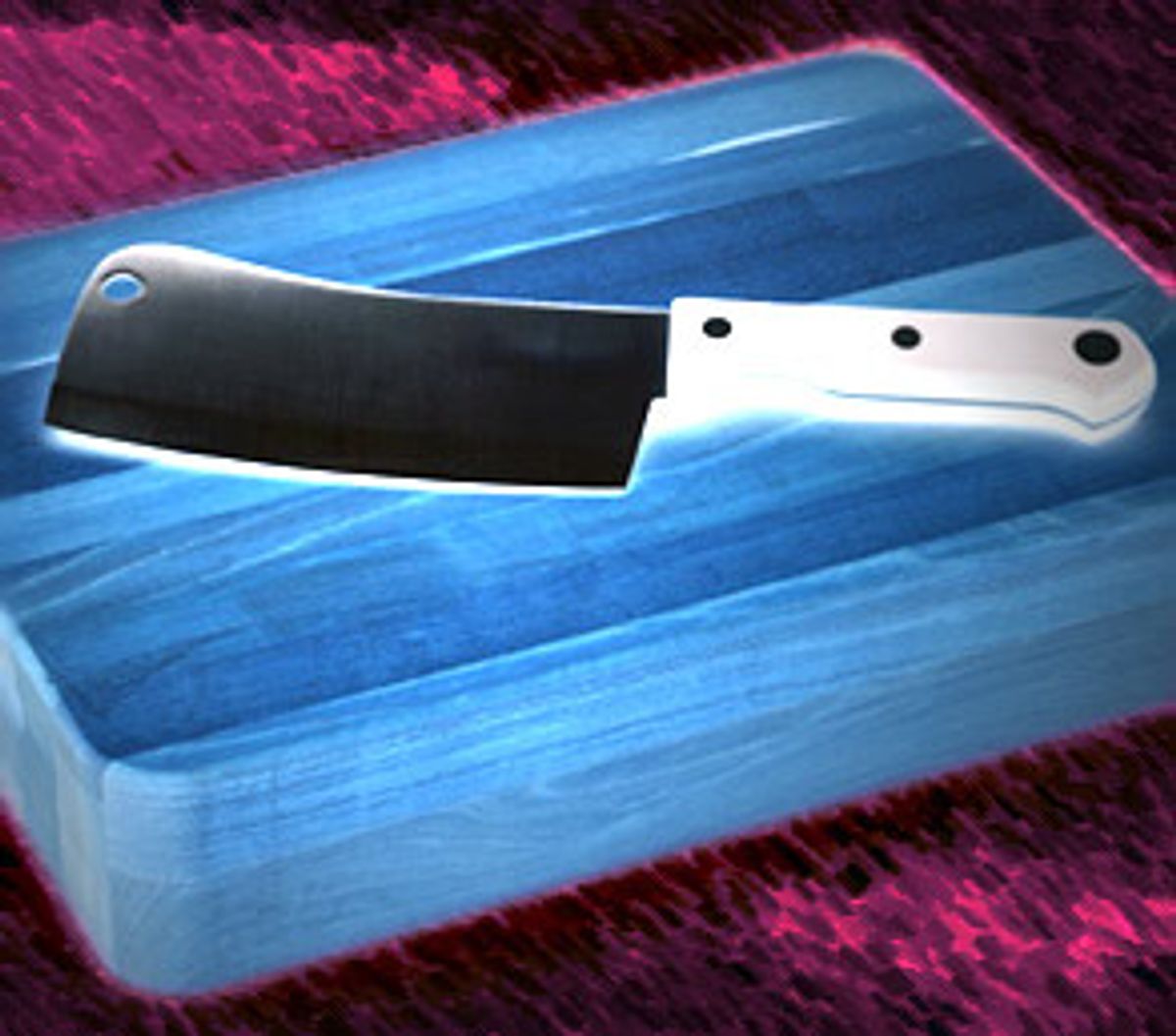 "What type of operation are you having?" my friend asked. "Nothing serious I hope."

It's an innocent question from someone who cares. A common one. People are naturally going to ask you about an operation when they find out you are having one. I want to calm my friend's fears and let him know that it's just "day surgery," that I'll be "in and out." I use key words and nonchalant phrases to lessen the importance of the procedure, to get him to think, "Oh, day surgery, it must be simple removal of a bump or a tonsillectomy or minor carpal tunnel surgery. He'll be fine."

But I didn't have any of those procedures. Last month, at age 34, I was circumcised.

Oddly enough, I had found out just a few weeks earlier that I did, in fact, have bad carpal tunnel syndrome, and should have that operated on as well. Then I found out I needed a circumcision. So I weighed both options. Which should I have first? I decided it didn't matter. Whether the first surgery was on my right hand or my penis, my sex life would be put on hold either way.

Many people become confused when I say I "needed to have a circumcision" because they've been programmed to think that this foreskin-removing procedure is either a) a choice made by parents for reasons religious or related to hygiene or b) there is something drastically wrong like infection or cancer. But I fell into a third category: I wasn't circumcised as an infant, and have never been able to retract the foreskin properly. I hadn't had any major problems like infection or pain or bleeding, but my doctor said I should have the operation while I'm still young because later it could progress to the point where I wouldn't be able to retract the foreskin at all. That means not being able to clean, and risking an infection.

Members of the pro-circumcision camp will use my case as an example of what men will have to go through -- ah, the pain and agony -- if they don't have the procedure done as babies. But the truth is that only a small number of us have to get it done as adults. (And my mom died a couple of years ago, so I can't ask her why I was spared the surgery as an infant.)

Although there are no reliable national statistics, according to Dr. Edgar Schoen, a clinician and researcher with Kaiser Permanente in Oakland, Calif., about 10 percent of all uncircumcised adults at Kaiser have circumcisions for medical reasons. Usually it's because of hygiene, infections or sexual-related problems. Very few adults have circumcisions for cosmetic or religious reasons.

After all, why would men voluntarily give up their foreskin? If you like the synthetic lubricants, you should see what a foreskin can do, only naturally. No rawness, no ultrasensitivity. Before my procedure, the only thing that crossed my mind from time to time was the question, "Should I be able to clean under there, and is that going to cause any problems?"

In the "is circumcision necessary" debate, my scenario is almost always overlooked. When I researched online, I found many discussions on whether circumcisions are necessary for personal hygiene or painful to the infant; I also found long-winded rants on (yikes) foreskin restoration, which is basically the same procedure, only in reverse. But there was no information about others like me.

But I did discover that while, yes, problems like penile cancer are rare (around a few hundred per year -- still too many for me!), out of those rare cases, 99.9 percent of them are on uncircumcised men. That will get a guy thinking.

But I had other fears. Was there any chance of anything going wrong during the operation? (The answer was no -- problems are rare, and my doctor had performed a couple hundred of these procedures.) Would there be any side effects from the medication or sedative? (Answer, very rarely.) And, most important, would I lose any of my size? And if you think the latter is bragging, please note that I'm 5-foot-5 with thinning hair, so this is the one thing I have going for me. Would length or thickness be compromised? He told me that on all counts, everything would be fine -- though I should be prepared not to have sex for several weeks. Which was fine. I was preparing for that anyway.

My urologist said that he is seeing more adult men and teens looking into circumcision, and that if I had come to him while I was in high school, he would have suggested I get it done then. (Interestingly enough, boys under 14 account for half the number of circumcisions performed post-infancy at Kaiser. This is usually because of infections, pain or phymosis, a condition in which the foreskin cannot retract and that makes erections painful.)

But my doctor told me not to worry, that I was at a good age and not too old. Translation: Some older men can become squeamish about the procedure. And he said there really was not reason to get all worked up. The whole thing would take about an hour, three hours if you include prep/recovery time. During the operation, I could be given a local or a spinal, or be knocked out completely. I thought, "Hmm ... get a local and be acutely aware of the cutting and removal of vital body parts, or be completely knocked out and not remember anything?" Decisions, decisions.

He also told me that there would be a woman in the room during the operation. Is that OK? "Sure," I thought to myself, "as long as that woman is Jennifer Aniston."

Now, there are certain combinations of words that just do not make sense. Words that you don't expect to see in the same sentence, such as "rap" and "music," or "Pauly Shore" and "Oscar," or "verdict" and "guilty," if you are the one on trial. You can add to that list the words "penis" and "cutting."

On the day of the procedure, I wore sweat pants. I wanted to feel loose down there, knowing that much pain and bandage were in store for me. Going to the hospital for a circumcision is a surreal thing. The moment I got there, I knew all the nurses were thinking, "Oh, yes, you're the man with the penis." Sure, the guy in the corner had his foot operated on, and there was a young boy next to me asleep after a minor operation, but I was the guy with the penis. All the women there were talking about it, but not in the way I had ever imagined.

After discussing options with my anesthesiologist (I went with the triple team approach: I.V. sedative, a spinal and a local), and answering questions about next of kin, my religion, my allergies and how I thought the Red Sox were going to do this year, I was wheeled into the operating room.

The spinal was smooth and quick, and my entire lower body instantly became completely numb. Then the sedative that I had earlier started to take effect. The last thing I remember hearing was the nurse say, "Now I'm going to shave you a little bit."

My memory of the rest of the surgery is pretty blurry; I vaguely remember my anesthesiologist standing next to me, repeatedly looking at my penis, then looking at me. I recall the faint sounds of medical instruments clanking together, and the loud jazz music, elephants and balloons falling from the ceiling. Oh, wait, maybe the sedative was stronger than I thought.

The next thing I knew, I was being wheeled to the recovery area, my favorite organ wrapped tighter than the handle of Mark McGwire's baseball bat. The nurse said I would stay there for a couple of hours and then she would call my sister, who would give me a ride home. The nurse asked me if I wanted some ginger ale, and I wondered whether it was the official drink for Adults Who Have Circumcisions. I was thirsty so I drank up. Big mistake, downing lots of liquid when you've just had your member operated on. I walked to the bathroom to see if I could even do my business. It was bloody. That's what I remember most, the trail of blood I left from the bed to the bathroom. Oh, that and the nurse lifting my gown up to check how things were, without warning me that she was going to do it -- my own little "Marilyn Monroe standing over the subway grate" moment.

At home I was walking at a speed usually reserved for 70-year-old women with walkers, my face locked in a permanent grimace. The next three weeks were hell: I couldn't exercise, I couldn't lift anything and I had to remember to take an antibiotic three times a day, and then to rub antibiotic cream on the incision. I had to be careful of what I wore because some material felt like sandpaper against my body. Every morning in the shower I had to change the dressing and wash myself gingerly. It was a three-hour process.

Drying myself off, putting a new dressing on and moving around the house reminded me of the scene in "Mission: Impossible" in which Tom Cruise is dangling from the wire in the computer room. I had to move slowly, strategically. I screamed in pain more than once, flesh brushing up against gauze and clothing. This is why God made Percocet! But I never took any. The Advil was more than fine. If I stood still, I was fine. But if my robe or my underwear or the tape or a towel hit it ... wow.

The solution: I became a temporary indoor nudist!

Side note to new or soon-to-be-parents out there: As an adult who has been on both sides of this issue, I ask that if you are choosing to not have your son circumcised, please think about this. Sure the baby is going to feel pain, but it will be temporary. It's a lot easier to deal with as an infant than it is as an adult, where so many other aspects of your life are put on hold. At least as an infant, he gets to lie around all day, and he won't remember it later in life.

As for me, I feel reborn! The discomfort is gone, my penis has healed and it's even, dare I say, handsome? It now has quite profile. Where the old me was just this piece of dangling flesh, the new me is streamlined and classic. Elaine once remarked to Jerry Seinfeld that that the penises of uncircumcised guys "have no personality." I'm beginning to understand what she meant.

Now I just can't wait to use the damn thing.

Bob Sassone is working on his first novel and a book of essays/short fiction. He lives north of Boston.