Picking daddy from the mail

It's hard to choose the wrong sperm donor. 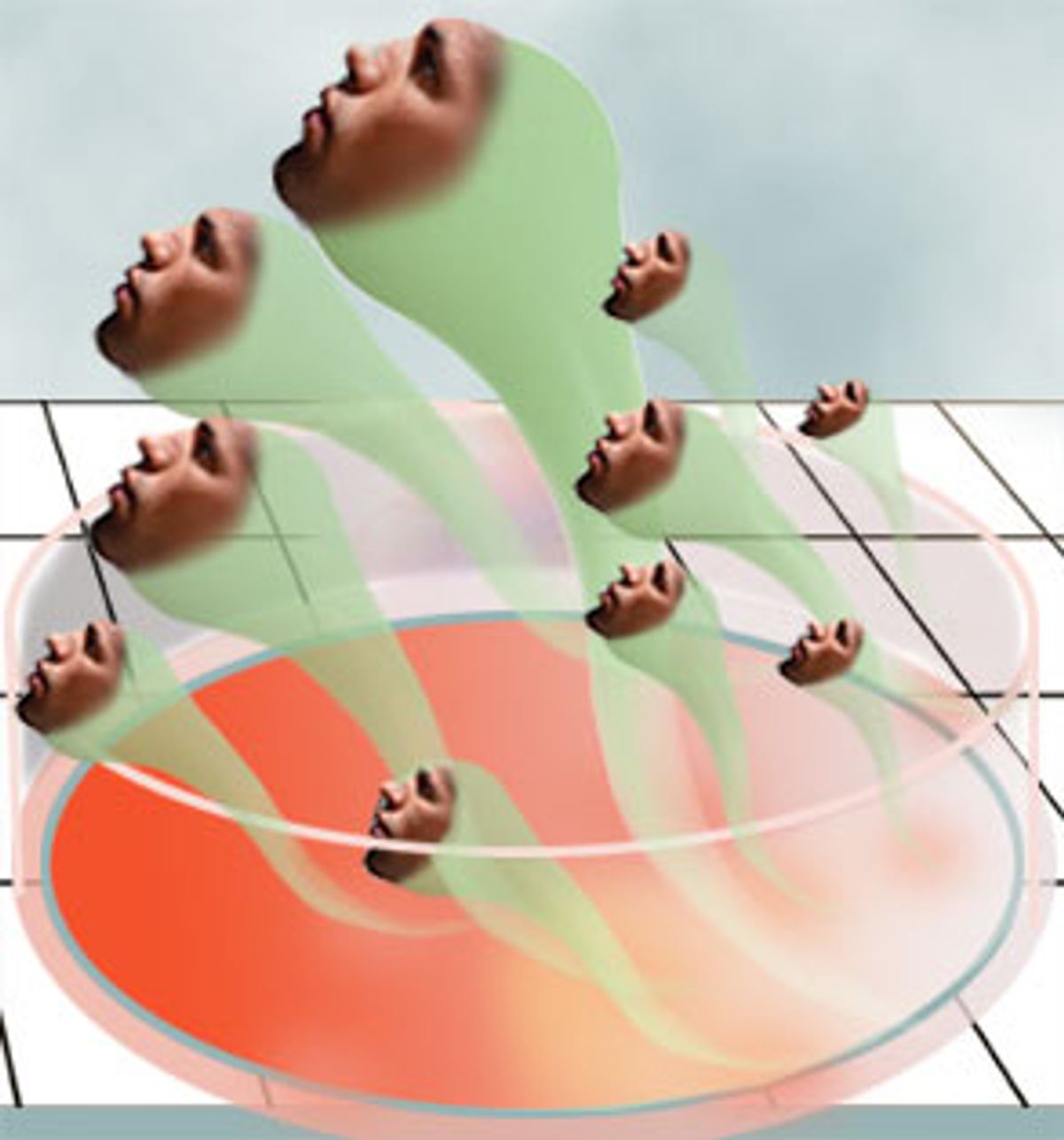 Seven years ago, heart pounding, I told a story to a group of strangers at a storytelling class. It was about something so raw and personal that telling it was like drinking a straight shot of vodka. It made my eyes water and my hands shake. When I was finished I felt flushed and free and slightly dizzy -- even a little giddy.

Every two months, a letter arrives for me in the mail. It isn't much to look at on the outside. Just a standard business envelope with a computer-generated label in the center and a rubber-stamped address at the top left corner.

Inside, there's one sheet of paper. It is gray. On it there's a photocopied list of about 30 lines. Each one reads about like this one:

Each line describes, in the most superficial way, a man. A man whom I know nothing about.

I don't know what he's like in the morning. Will he be mad if I want to read the comics first?

I don't know if he'll do the dishes when it isn't his turn.

I don't know how he shaves. Will he use shaving cream from a can? Or will he use that old-fashioned cake soap and a badger brush? Will he use a razor or an electric shaver? Maybe he has a beard.

What would he be like on a long car trip? Could he keep his sense of humor on the east side of the Sierra in the spring, as night falls and a dust storm kicks in and we have to stop for the night, but we can't find a hotel room because there's a marathon in Lone Pine the next day that we didn't know about?

What makes him happy? Would he laugh at "The Simpsons"?

What makes him cry? And how does he cry? Controlled single tears that trace a clean, straight line down his cheeks? Or huge, wracking, wretched sobs that make his back undulate like a wave?

Does he love his mother? Honor his father? Love his siblings?

Can I trust him to pick me up like he said he would, on a rainy dark night when I'm scared, and tired?

There's so much that I don't know about the men on that piece of paper. I'm not dating them. I won't be sharing dinner or spending the night or the morning, with any of them. I'll never meet them at all.

But I will be sharing the rest of my life with part of them. I'll bear the child; my husband and I will love the child. It will be our child. And one of those men will be the biological father of that child.

That is one of the things that I don't know.

When I wrote that story, choosing a sperm donor seemed like a momentous choice. A mystery. The list seemed like a talisman. An oracle. I studied it for clues. I saved the letters that came every other month. It seemed important to save them. I thought maybe if I found the right combination of letters and numbers that I'd know what to do, when to do it.

But it didn't work like that. Instead, after a few years, when we were done grieving for the child we would never make together, we just decided to make a baby. And, somewhat cavalierly, with a certain amount of "isn't this the weirdest thing" levity, we just picked three men off a list and went from there.

I wanted the donor who was both part Dutch and part Japanese. I thought, "Why not go Pacific Rim? Sounds like he'd make beautiful children." We played haunted house with the dry ice the sperm came packed it. We enjoyed picking up the sperm in our tiny little icebox made for six-packs of beer. We joked that we'd tell our future child that we brought her home when she was "very little."

I came to look forward to waiting in the sperm bank lobby and meeting all the other proud and anxious women who were there to pick up their sperm too. We found ways to make using a syringe vaguely sensual. I heard myself tell my obstetrician that I wasn't a high-risk pregnancy -- that we were just like any other couple, except we had to order takeout.

And now, our daughter is 4. Everyone thinks she looks just like her dad. We decided early on to just say, "Isn't that amazing!" and giggle at our own private joy that it is true. She's all ours -- I recognized her elbows the moment she was born. Her dad's voice was the only one that stopped her infant cries; as I write this she's curled around him on the couch like a vine and they're both fast asleep. She gets our jokes. We get hers.

We're starting all over again -- the tiny icebox, the dry ice, the phone calls, the testing, the timing, the waiting. We're using the same donor as last time, using sperm that has been stored on ice for five years.

We had to choose whether to have that option before our daughter was even born. I remember eating burgers, drinking beer, checking our savings account and wondering whether we'd like the first kid, wondering whether it would be worth it to buy ahead and pay for storage. Five-year plans are just not part of our family's coping skills. It was quite a conceptual stretch, on every level.

I was right when I told the story of choosing Mr. Right to my storytelling class all those years ago. It is a mysterious choice, made with minimal information and monumental consequences. But I was wrong too. Picking the right donor wasn't really the point, because the child you get makes that choice "right" every time.

Elizabeth Henry is a pseudonym for a writer living in California.