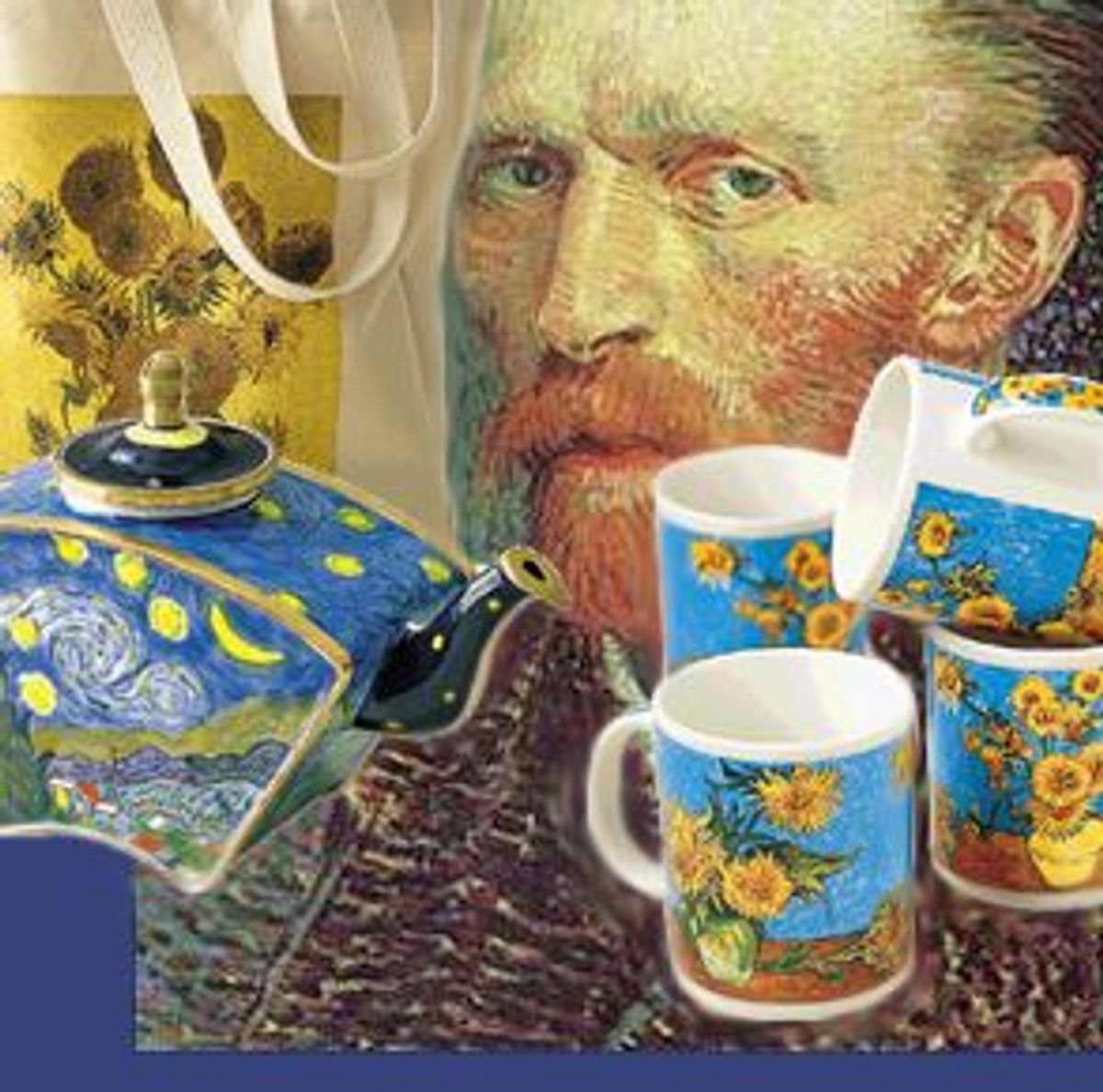 Salesman Finds Artist's Mummified Ear in Nebraska Attic! "Larry Reibater thought an old box in his dead grandmother's attic contained nothing but worthless junkuntil he looked inside and found a priceless treasure: the lost ear of painter Vincent van Gogh!" Now the 45-year-old used furniture salesman is sitting pretty -- the leathery ear is expected to rake in a staggering $1.2 million at auction. Art dealers from around the world are clamoring to bid on the legendary body part. -- The Weekly World News, March 11, 2000.

Though the preceding tale is obviously a joke, there's nothing funny about the mania for van Gogh merchandise. From respectable museum curators to imaginatively crass profiteers, many have learned that the insatiable demand for all things van Gogh means piles and piles of money.

This summer, as art lovers flock to see "Van Gogh: Face to Face," an attendance-breaking exhibit devoted to the full range of the Dutch master's portraiture, the action is hot in the galleries and the gift shop. "We sold 316,000 tickets, which is huge for us," says Barbara Van Vleet, a spokeswoman the Detroit Institute of the Arts, where the traveling exhibition originated on March 12. "And our museum store grossed over $2 million in 13 weeks." The figure, she adds, represents the most money the store has made in DIA's 115-year history.

On July 2, "Face to Face" opened at the Museum of Fine Arts in Boston. Within the first two weeks, more than 140,000 tickets had been sold. (The Philadelphia Museum of Art, where the exhibit will travel to later this fall, likewise expects a strong turnout.) Along with crowds showing up to view the art, sales at MFA's temporary exhibition shop (decorated in Provengal blue and sunflower yellow) had already reached $400,000 during the exhibition's first few weeks, far exceeding the museum's projections. The MFA store is offering a startling selection of 350 different must-have van Gogh objects. On the menu: Van Gogh tea; a rug with "Starry Night" woven into it; a fashionable replica of the artist's straw hat from one of his self-portraits; silk sunflowers; tiny collectible enamel teapots painted with replicas of van Gogh masterpieces, and from the "Van Gogh for the Home" collection, tempered glass cutting boards of several van Gogh masterpiecesdishwasher safe.

And then there is the ubiquitous severed appendage -- which seems to be available everywhere, except at the MFA, which refuses to sell any item it believes demeans an artist's reputation.

"People always zero in on van Gogh's ear," explains Ellen Woodoff of the Columbia Museum of Art in Columbia, South Carolina, whose gift shop -- like most museums that exhibit the artist -- offers the "Pin the Ear on van Gogh" game.

Bad taste? Perhaps. But some van Gogh profit makers manage to take the high road. "It was a brilliant move by our owners many decades ago to name one of their product lines after van Gogh," says a humble Jeff Neumann, product manager for the van Gogh paint line at Royal Talens, a century-old Dutch company that introduced its van Gogh paints about 50 years ago. The line has since become one of the world's leading paints for artists. "The name has only grown in brand recognition," Neumann says.

Given that van Gogh died 150 years ago, broke, ill and unknown, it's ironic to contemplate dishwasher-safe collectibles in his name (not to mention the $82.5 million sale of van Gogh's "Portrait of Dr. Gachet" to a Japanese industrialist, the highest price anyone has ever paid at a public auction for a painting). What could possibly account for this Vincent mania, and the cottage industry that follows in its wake?

"Van Gogh's mass cultural appeal may have been ignited in 1934, when 'Lust for Life,' Irving Stone's bestselling novel about van Gogh, was published," says Joy Kenseth, an art historian and professor of Renaissance and Baroque art at Dartmouth College. "But it was probably the movie version of the novel [which premiered in 1956] starring Kirk Douglas as van Gogh that really propelled him as a popular culture figure -- an icon."

Kenseth credits the late John Canaday, a New York Times art critic and author of the book "Mainstreams of Modern Art" (1959) for being one of the first in the art world to say that this pop culture embrace of van Gogh was based more on the artist's life story than on his work. In his book, Canaday wrote: "Thousands of people find van Gogh an accessible and sympathetic person while during his life, craving love and offering it everywhere, he was only able to find a handful of friendships and half of them were disastrous."

Says Kenseth: "Triumph-over-adversity stories are an integral part of this culture. Van Gogh suffered, but he overcame his pain for a while, and made many gorgeous paintings even as he was going nuts. He's made to order for America."

While sitting in a gallery as workmen hang van Gogh's renowned portraits of the Roulin family, George Shackelford, the Boston MFA's chairman of European art, adds that the recognizable quality of Van Gogh's work makes people feel more comfortable. "People love him because his work is great no matter how commercial it becomes." Shackelford cites the many books, novels and films that have documented the painter's tragic existence. "The intimate details of his life are there for everybody to read. How much does anyone know about the inner thoughts of Monet or Renoir?"

What would van Gogh make of Atlanta's Ricky and Robby Heisner, the two singer-songwriter brothers who founded a rock group called van Gogh? "My brother and I both have muscular dystrophy," says Robby Heisner. "We're both in wheelchairs. When we named our group in 1991, we knew we needed an artsy, classy, colorful name. Van Gogh's story really caught us." On tour, the brothers perform in sunflower yellow wheelchairs; Ricky wears a bowler hat, Robby wears a top hat, both are festooned with cloth sunflowers. The band has four CDs and a fifth to be released later this summer. The title song on the duo's fourth CD, titled "van Gogh," was written by the Artist Formerly Known as Prince. An admirer of the Heisners, Prince gave them the song for their new CD. "Loving you is like loving a rare van Gogh," goes a line in the chorus.

Holland native David van de Velde was stunned by this passion for van Gogh when he saw the lines that "Van Gogh's van Goghs" generated when it came to the Los Angeles County Museum of Art (LACMA) in January 1999. (The show went on to become the world's most highly attended museum exhibition that year, according to The Art Newspaper of London.)

"When I saw the people waiting day and night, that's when I had a brainstorm," says Van de Velde, whose Luctor International of Reno, Nev., brought Ketel One vodka to America: Vincent vodka and Van Gogh gin. "I knew I would need a 'wow' concept to get people to buy a new vodka or gin in this overcrowded market. People want to say 'I drink Van Gogh.' Image is everything. There's a reason why there are 52 trademarks with van Gogh's name on them."

Van de Velde admits that he had never had any strong feeling for van Gogh until the explosive reaction at the Los Angeles exhibition (which drew over 800,000 ticket holders and injected more than $120 million into the Los Angeles economy). In the eleventh hour of the exhibition, which was extended by six weeks, crazed fans were so desperate to gain admission that the museum opened its doors around the clock in what it billed a "63-hour marathon of masterpieces," with reduced ticket prices for viewing times between midnight and 7 a.m. On its van Gogh "farewell weekend," LACMA even opened a cash bar called Club van Gogh, which featured the "van Gogh martini."

"Growing up in Holland, we were taught that the real Dutch painter was Rembrandt, that he was the better painter and the better person because van Gogh was crazy and he associated with prostitutes and other characters," Van de Velde says.

The Dutch may have been mistaken. Since van de Velde created his Van Gogh gin and Vincent vodka last year, Luctor has been deluged with e-mails and phone calls. High-octane chef Emeril Lagasse did a vodka tasting on his TV show and, taken with Vincent vodka's 3-D packaging, paid special attention to it, spinning the bottle around to make sure his viewers could see the view through the little window etched into the bottle's frosted glass, where five van Gogh paintings form a sort of mini-museum that unfolds as you swivel the bottle.

How long can the Vincent hoopla last? Experts in the art world are unsure. One threat is a surging interest in contemporary art among younger people. "Van Gogh appeals largely to older audiences," says Richard Kendall, an independent curator and the author of "Van Gogh's van Goghs," the companion book to the van Gogh Museum's traveling collection. "Besides, how many van Gogh shows can you do?" Waning or not, Kendall calls the van Gogh marketing phenomenon "extraordinary, amusing and sickening at the same time," adding, "People are fascinated by a man who many claim was foul-mouthed, crazy, unhygienic, antisocial and rude. But they buy charming, sweet, frilly junk that recalls his sun-filled Provence life. In the end, the real man van Gogh, an intelligent, sensitive, delicate man, is neutered and recast as he is made commercial."

The next few years leading up to 2003, the 150th anniversary of van Gogh's birth, seem to indicate that the worldwide demand for time with van Gogh will continue to rise. Between now and the summer of 2002, major art museums in Switzerland, Paris, St. Louis and Chicago will all hold important van Gogh shows. And as we march toward Vincent's birthday, rumors are circulating that the already popular pilgrimages to the house where van Gogh died in Auvers-sur-Oise, France, will multiply in the same way still-grieving fans flock to Graceland to honor Elvis. Will there be booths set up to sell Van Gogh paraphernalia?

If a Seattle company, Accoutrements: Outfitters of Popular Culture, has its way, one of its more popular products will be offered: a slimy, slithery rubber ear wrapped in a plastic and cardboard holder. On the back of the package is a description of the product and its many uses. "What can you do with van Gogh's ear?" the package asks. "Stretch it, squeeze it, squash it or smash it and it will return to its original shape. Throw it against a flat surface, such as a window or mirror, and watch it crawl down by itself. Van Gogh's ear is non-toxic, but don't eat it. Dirty ears (even yours) can be cleaned with soapy water."

"I guess I should be shocked by that," Kendall says. "But I'm not. Everyone else is cashing in What's one more opportunity to sell more junk?"

Barry Raine has written for Men's Journal and several British newspapers. He is now completing a nonfiction book.