Police tactics get bellicose and protesters shrill on the first day of demonstrations in Los Angeles. 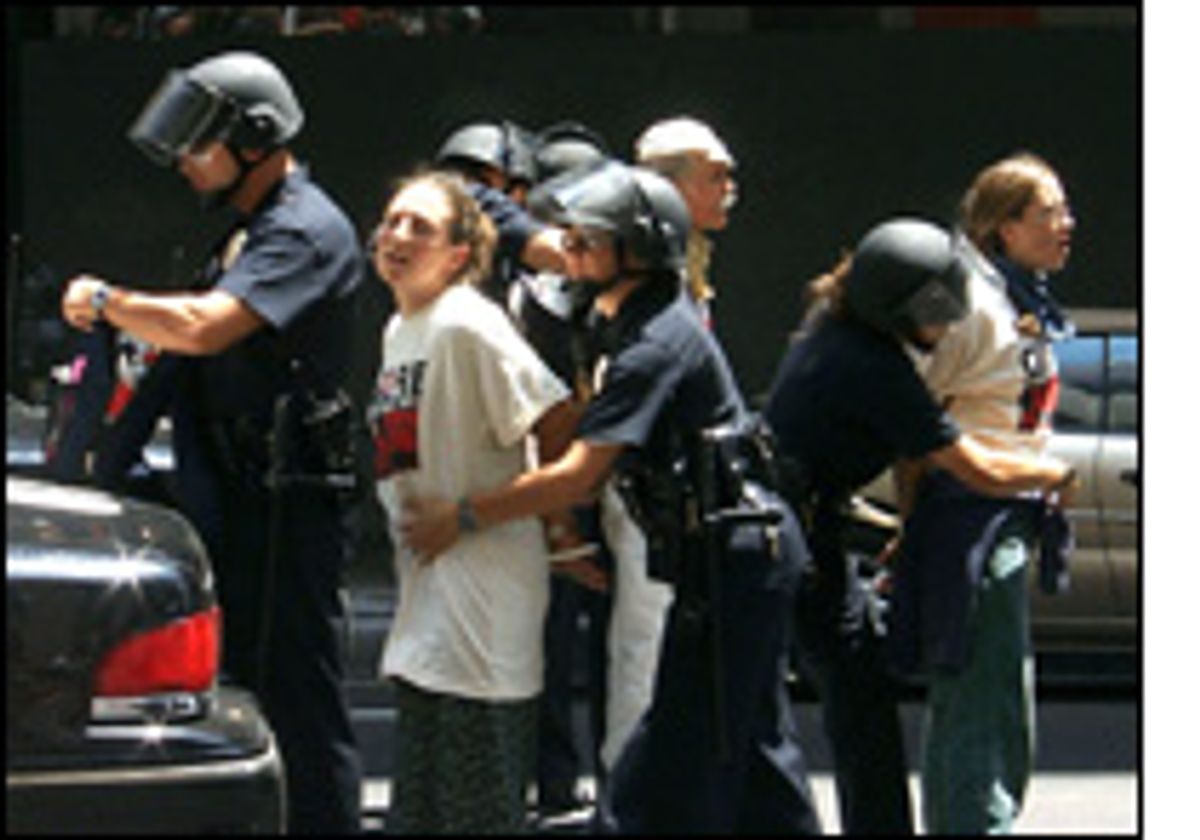 Things got ugly at the first protest on the first day of the Democratic National Convention.

Though there were only a handful of arrests, the tone of the demonstration was many decibels louder than any of the protests in Philadelphia -- where cops lounged on barricades, laughed and smoked cigarettes from the sidelines and protesters, for the most part, marched in orderly fashion down predetermined routes. In Philadelphia, police only donned helmets or drew their batons on a few occasions.

Cops here swarmed downtown by the hundreds Monday -- on bicycles, in squad cars, running in formation. They grunted and chanted as they ran, made hand signals to each other, used bullhorns and blared sirens.

At 9 a.m. Monday, several hundred activists gathered in Pershing Square and marched the mile or so to Staples Center, where the convention was taking shape. Unlike Philadelphia, where protesters were kept a safe distance from the convention center, Los Angeles has a designated protest area just footsteps from the Staples Center, on Olympic and Figueroa. When the marchers arrived, they were met with dozens more cops, and a quick performance by Bonnie Raitt, who sang Buffalo Springfield's classic protest tune "For What It's Worth."

As the marchers prepared to head back to Pershing Square, protest liaisons were alerting police that some demonstrators planned to get themselves arrested by blocking traffic at the intersection of Sixth and Flower streets. As the crowd with its oversized puppets, bucket bangers and sign holders approached the intersection, a swelling cheer rose. But those cheers were met with police in riot gear and cops on bicycles who converged on the scene.

As the march turned onto Sixth Street, the encroaching police divided the protest in half. A handful of activists chained themselves together in the center of the intersection. The rest of us -- protesters and media alike -- were pushed back by cops, who seemed as unsure of themselves and as nervous as the protesters at times. Police jabbed those of us at the front of the protest with their batons. Those behind us scurried in retreat.

I'd never been at the front lines of a scene like that before, and it frightened me. It was frightening to see hundreds of kids running in retreat. Frightening to see cops marching deliberately, batons at the ready. Tear gas guns were locked, loaded and cocked. Police warnings to disperse were chanted through bullhorns.

"This is an unlawful assembly," came the warning. "If you do not disperse, you will be subject to arrest or further police action."

It's hard to know what to fear more -- the confusion of the middle of the pack of protesters, seemingly lost without its head, or the pack of advancing police officers, face-shields down, batons in hand.

Slowly, the marchers were driven down Sixth Street as the lobbies of downtown office buildings flooded with curious bystanders. As the shopkeepers on Sixth got a glimpse of the tense scene, one after the other scurried to lock doors. As the protesters were driven back, at least two arrests were made. There were reports of dozens of others at the other half of the protest. But by 1:30, cars were moving down Sixth again, just in time for the start of an anti-World Trade Organization protest.

Two events last week seemed to intensify the tensions between protesters and police. The LAPD lost the two preliminary rounds in trying to keep protesters from disrupting downtown traffic. First, their decision to keep protesters away from the Staples Center was overturned. And Friday, a federal judge prohibited the cops from raiding the headquarters of D2K, the umbrella group organizing the protests.

Whether the protesters responded to the more bellicose approach of the Los Angeles Police Department, or the L.A. activists are simply a more confrontational bunch is difficult to say. But if the sheer energy of Monday's protest is a harbinger of things to come, it's going to be a long week for both.