Oops, she did it again 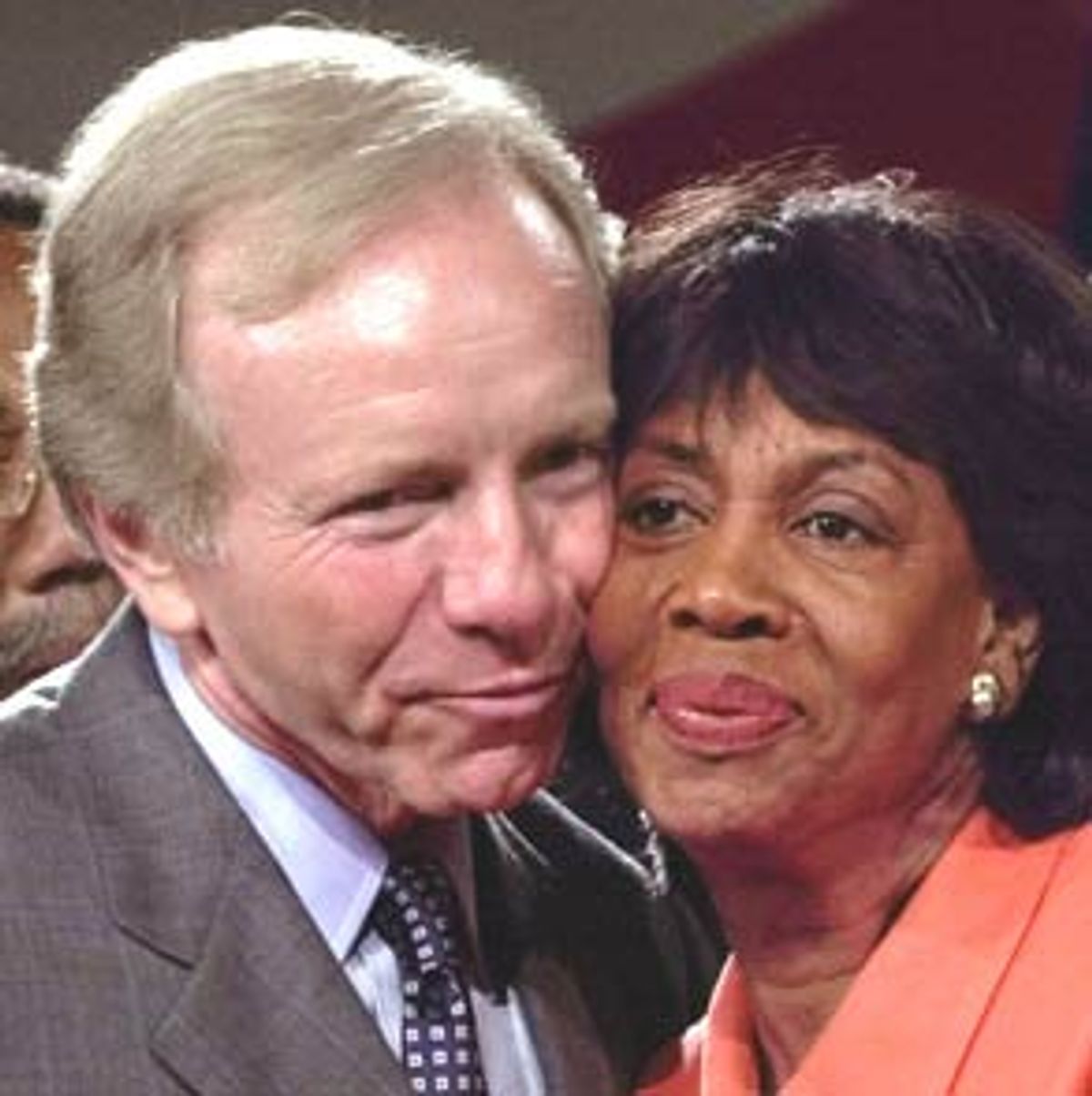 Joseph Lieberman may have sullied his reputation for truth-telling at a meeting of the Democratic National Committee's black caucus on Tuesday.

"I feel very comfortable here," he said during a workmanlike speech before the group, where he seemed anything but.

Luckily, Lieberman didn't have to be the marquee player at the crucial meeting, which came amid reports that African-American delegates were in revolt over his nomination. Rep. Maxine Waters, D-Calif., was happy to take the starring role, and she gave Al Gore's running mate a preview of his future playing second banana.

Waters made herself the big story of the dull convention's second day by telling the Los Angeles Times that she might not endorse the Democratic ticket because of Lieberman's stands on affirmative action, school vouchers and criminal justice. Her stance pushed African-Americans ahead of the entertainment industry and unions as the must-mollify Democratic constituency of the moment.

By the time Lieberman showed up at the black caucus meeting at the Westin Bonaventure Tuesday, the gathering threatened to be the convention's dramatic climax.

Though the nominee was scheduled to arrive at 10 a.m., the vast hall remained nearly empty at 10:30, except for reporters shuffling paper and grumbling about delays. Then the cameras flickered to life with the arrival of Labor Secretary Alexis Herman, Gore's lead black Lieberman defender, according to an article in the Washington Post. Her appearance kindled a brief, hopeful buzz that Lieberman was on the way, but soon Herman drifted out again, renewing complaints about the perpetually tardy Democrats.

Little did the complainers know that Herman's departure was the opening scene of the day's true top act. Instead of grabbing a cup of coffee outside the ballroom, Herman promptly grabbed the arm of the just arriving Waters, ushering the malcontent into a nearby conference room for some on-the-fly reeducation on Lieberman. Bored scribes trailed after them, only to be stopped at the conference room door by security.

When the ladies emerged, Herman insisted the encounter was little more than a friendly chat, but Waters wasn't so diplomatic. "We have been discussing that I am unclear about where Mr. Lieberman stands on affirmative action, vouchers and criminal justice issues," Waters volunteered, going on to complain that she'd been left out of the loop.

"I never had the opportunity to talk to anybody about it before he was decided on as the vice presidential choice," she told reporters. In her harshest statement, the California congresswoman threatened to sit out the campaign entirely if Lieberman didn't dance to her tune. "I would seriously sit out an election if, in fact, the issues that I've worked on all of my life are undermined," she said.

Ever the steel magnolia, Herman continued to accentuate the positive, vowing that Lieberman would give Waters a thorough account of himself. With the assistance of the ubiquitous security officers, Herman then pulled Waters away from the press to a more remote spot in the hotel where Lieberman could grovel in privacy.

Meanwhile, the black caucus event limped along without Lieberman, Herman or Waters, covering health issues affecting the African-American community. While the now-large audience paid careful attention to Reps. Barbara Lee, D-Calif., and Edie Bernice Johnson, D-Texas, as they proposed solutions for everything from AIDS to osteoporosis, oblivious reporters played with their notebooks and cellphones, waiting for the main event.

Finally, an hour and a half behind schedule, security agents crowded an exit and caucus members prepared for the Lieberman show. First Herman, then Washington delegate Eleanor Holmes Norton ascended the stage. The task of introducing the guest of honor fell to Norton, who'd known Lieberman since their days as Freedom Riders.

Perhaps she'd have done a better job with a stranger. After explaining at length that Lieberman was a true liberal hero, bringing a smattering of claps but a whole lot of silence, she said to Lieberman, "You da man!"

Though there were a few conspicuous still hands, "da man" got a standing ovation when he took over the podium, and the crowd remained dutifully enthusiastic throughout. At moments, he even broke through the ice, especially with a meandering joke about a minister, a cursing kid and a faulty toy wagon (you had to be there).

But Lieberman never managed to keep the flow going. "You're not only looking at a senator and a vice presidential candidate, but also a frustrated preacher," Lieberman said at one point. It was easy to see the source of his frustration, as Lieberman sing-songed the high points of the Clinton administration's record in the affably dull tones of a college professor.

In fact, several of his biggest applause lines came second-hand, as the crowd roared at his periodic praise of President Clinton, and at his oft-repeated promise to defer to Gore in any matters under dispute.

As if aware that his demeanor might leave the crowd searching for a backup star, Lieberman voluntarily turned the spotlight back to the scene-stealing Waters, wishing her a happy birthday from the podium.

She stood up and gave a royal wave as the audience leapt to its feet, spontaneously crooning "Happy Birthday." To make the queen for a day motif complete, a young caucus aide rushed over to her seat with a birthday bouquet.

But Lieberman ended the magic moment by retaking the mike. "A few questions have been raised about my record since I began this remarkable experience," Lieberman said, preparing to explain his impure political thoughts. "I want to address them right now."

He then did as he had promised, launching into a tortured explanation of an off-the-cuff statement he had made five years ago in support of an anti-affirmative action initiative in California. He completed the redemption cycle by heartily endorsing good, non-quota-based affirmative action, much to the audience's delight.

Lieberman repeated the process with the next issue that put him on the black caucus' hit list, apologetically admitting his support for school vouchers while couching his position in an effusive defense of improved public education. The audience rewarded him again for the half turnabout, and gave him another standing O for his trouble.

He came, he saw, he ate his words, and everyone seemed relieved and happy. Yet there was little time to soak up the moment before Waters was back in front of a mike, this time on the podium, ready to give her benediction. Speaking to both the audience and Lieberman, Waters alternately slapped and caressed the veep wannabe.

"We had a meeting, we have talked and I said to him, 'You have got to make your positions clear ... it is time for you to come before the black caucus of the Democratic National Committee here and now.'"

Waters made it clear that Lieberman had satisfied her on most issues, but he'd better be quicker the next time. Happy that Lieberman and Gore had learned their lesson, she graced them with her endorsement.

After the press and the newsmakers melted away, some wondered aloud what the big deal had been in the first place. Those with long memories recalled that Waters made a similar stink in San Francisco in 1984, when she threatened to withhold her endorsement of the Walter Mondale-Geraldine Ferraro ticket because the Democrats had not considered a black woman on their list of potential female VP nominees -- and then backed down.

Rep. Bobby Rush, D-Ill., said that while Lieberman needed to address concerns about his record, it was a friendly invitation and that Lieberman acquitted himself well.

"Some questions were raised about Joe Lieberman's support for affirmative action. He addressed those directly. If you look at his life experience, starting with marching for civil rights in the 1960s to the votes he cast in the 1990s in favor of affirmative action, it was clear that he supports it."

Hilary Shelton, director of the NAACP's Washington bureau, vouched for Lieberman's voting record, and disputed the idea that the Lieberman pick came as a shock to black leaders. "The Gore campaign sent us a list of six candidates before he made his choice," Shelton said, adding that Lieberman had a 100 percent rating from his group. "There were some other statements he made that we were concerned about, but he answered those concerns today."

While he lamented what he considered an invented drama, Watt wouldn't name the inventors. As for Waters' complaints that black leaders were left out of the loop, he said that she wasn't the spokesman for the black caucus on Lieberman. "I think that Maxine is speaking for herself."