In quest of the perfect pet

Yutaka Saito, creator of Seaman, has been dreaming since childhood of an animal that talks back. 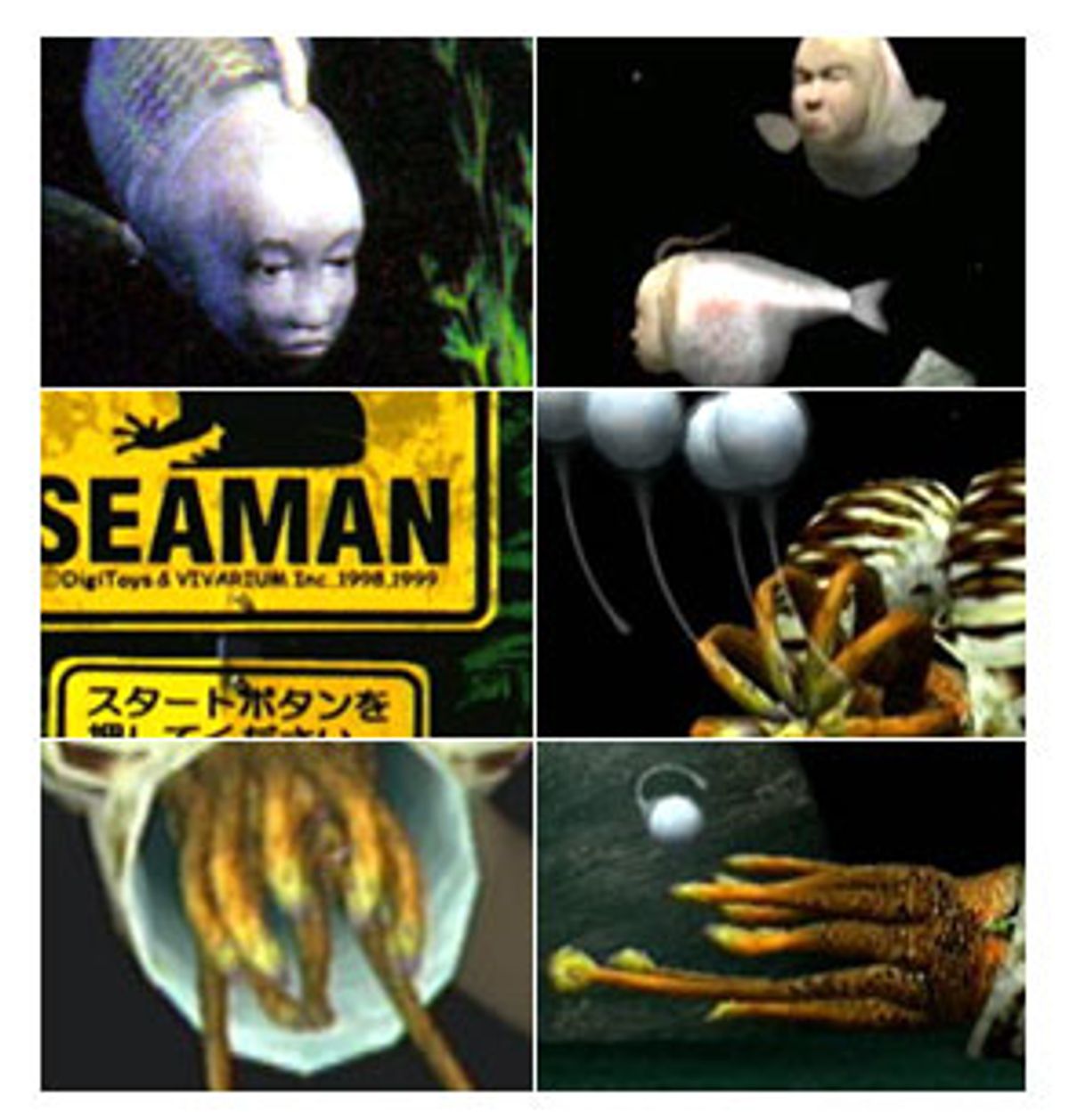 And just at the far end of the tanks, at specially manned stations, lurked a very different kind of sea creature: Seaman, the half-man half-fish star of the latest Dreamcast console game to hit American shores, and Saito's latest progeny. Unlike the poor octopus, Seaman has been endowed with an AI engine and voice-recognition technology, and can sass its owners back.

Saito's Seaman game has turned him into a bona fide gaming celebrity in Japan, where it has proven the most popular Dreamcast game ever. But Saito has a long history of popular simulation games: He was the creator of popular mid-90's games like Sim Tower and Yoot Tower. Salon cornered him near the tiger-shark tanks and asked him a few questions about his surreal new character. Most questions he answered in English, only occasionally turning to his translator.

What made you want to create a game about a creature that was half-man, half-fish?

From my childhood I had a dream to create a weird pet who speaks back to a human being. As a kid, I used to wonder what would they speak back if they had a mouth? That's what I wanted to do -- create computer software to do this.

Why do you think the game has proven so popular in Japan?

That's a hard question -- I'm not a marketing guy. It's a bizarre thing. It has a piece of intelligence, and most of the users of Seaman in Japan are not gamers. They have to buy the Dreamcast to get Seaman -- so Seaman costs them $250.

They aren't gamers? Who are they?

It's really a broad range.

What appeals to them about it?

I think this kind of thing has never existed before. They wanted to experience that -- a conversation with a weird pet. Seaman is intelligent -- in talking, he learns how old you are, your sex and age, your job, a lot of things. And he'll mention it in conversation. Role-playing games are led by the same script, the answers are the only things they have. But Seaman is fully interactive and flexible, so it varies.

Do you think he would pass the Turing Test?

No. Seriously speaking, artificial intelligence can never be perfect -- even voice recognition software can never be perfect. It'll never reach 100 percent. Human beings can't even achieve that in conversation -- we are always suffering from miscommunication, and if miscommunication vanished, I might have to kill somebody. Voice recognition? Even I can't be that perfect. A computer doesn't have a body, or a central desire; they can't have fevers, or make love. So they can't even be perfect as a human being.

Seaman, to be honest, is a fake. We cover that imperfection with very analog-like approaches. The question was how to recover from errors. Most of the [other AI software] suffers from badly written voices. If Seaman did it like most computer agents do -- "I'm sorry, I didn't recognize your voice, please try again!" -- or like on voice messages -- "Thanks for your patience!" -- it wouldn't work. So instead of doing that, Seaman just [swims] away and gets angry. Humans have to come down to the level of Seaman so that he can understand them.

How would you compare Seaman to The Sims?

The Sims line of products always have a viewpoint like God -- seeing things panoptically. Seaman is focusing on absolutely one thing. Both are simulation games, but they are opposite: micro and macro. Sim Life, Sim Ants, Sim City -- in these you are like God. In Seaman, Seaman is going to be like the God. Seaman plays you.

Do you worry that simulation software is just a second-rate reality? Should people be running home from work and school to go nurture a creature on a screen, instead of raising a real pet or talking to a friend?

To be honest, I wish everyone had a real pet, rather than exploring digital worlds, simulated worlds. I wish everyone could go explore the Amazon -- instead of just Amazon.com. But in Japan, it's a very small country with a lot of people in it. There isn't much space, and everyone is crowded -- they don't have space for large families or pets. By creating a computer where people can take interest in having pets, maybe it will interest them enough to someday get a real one.

Of course, a real pet won't be able to talk to you and tell you how it feels -- but that's the interesting thing about having a real pet.