The sinking of the Kursk raises questions about the safety of Russia's nuclear submarines. 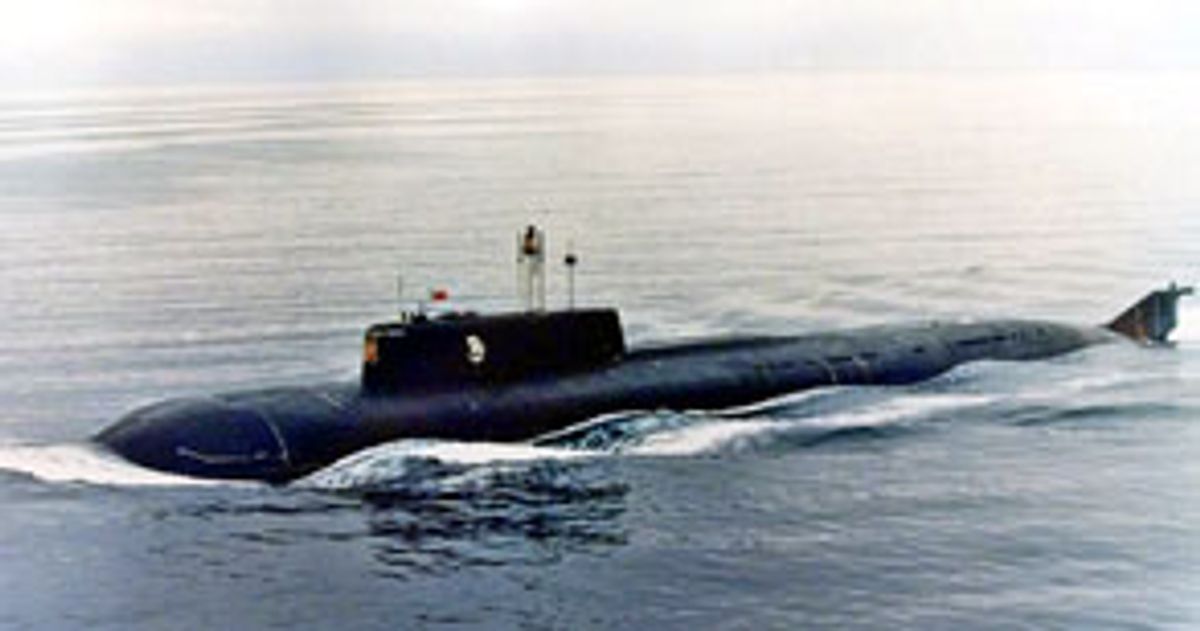 Nuclear-powered submarines, which still ply the world's waters armed with nuclear warheads, are a potent reminder of the Cold War era. Earlier this week, the Russian Kursk nuclear submarine sank off the coast of Norway, leaving 116 crew members to contemplate their fate inside a sealed coffin on the seafloor, 350 feet beneath the arctic waters of the Barents Sea. The accident raises fresh questions about just how safe nuclear submarines really are.

News reports have focused on the harrowing effort to rescue the crew: The Russian navy made repeated efforts Tuesday to lower a submersible to rescue the stranded crew -- whose plight is compounded by a dwindling supply of oxygen expected to last through Friday. And, sadly, Russian navy chief Adm. Vladimir Kuroyedov has dismissed the odds of rescuing the sailors as "extremely grave," saying the chances of the crew's survival was "not very great."

But beyond the question of the fate of the Kursk's crew are bigger questions about the safety and viability of Russia's nuclear fleet. A 1992 report issued by Greenpeace said there were 121 "serious" accidents on Russian nuclear subs from the time the fleet was inaugurated in 1956 until 1991. And experts say as many as 500 have been killed in Russian nuclear submarine catastrophes.

Though Russian officials say the Kursk is not carrying any nuclear warheads, the presence of a nuclear reactor onboard and the accident's close proximity to Scandinavia evoke stark memories of the Chernobyl disaster, which had devastating and widespread environmental consequences. With its precarious financial situation, does the Russian military have adequate resources to maintain its nuclear subs? Does it take reasonable safety precautions to protect its sailors? And does an accident like the Kursk's present an environmental hazard to the Scandinavians or to delicate marine life?

Salon spoke with Elizabeth J. Kirk -- program director for Europe and Central Asia at the American Association for the Advancement of Science in Washington and the author of the NATO book "Decommissioned Submarines in the Russian Northwest" -- about the Kursk accident and the environmental risks of nuclear submarines.

Why are we so fascinated with undersea tragedies? We have practically a canon of literature and film devoted to the subject -- from "20,000 Leagues Under the Sea," to "Das Boot" to "Gray Lady Down." As a culture, we seem obsessed with sinking submarines and ships.

The deep, deep sea and space are two of the least understood frontiers. And science can offer us so much understanding, but it's still fascinating to try to figure out what happens in the deep sea. But it's also an unfortunate thing that even with all our modern technology, it's still very difficult to rescue people in submarines in deep seas.

Do you think there's something in the American psyche that leads us to believe that water-based accidents are more horrifying than, say, a car crash?

Only because they are not as well understood and because there have been so many fatalities -- over 500 Russian sailors have died in submarine accidents -- and no one's there to tell the story about what happened.

How common are nuclear submarine accidents?

They're not common at all, if you think about all of the time they spend at sea. Apparently, the Oscar class can spend four months at a time and at least part of the fleet is out there all the time. Given that, these accidents are pretty uncommon. There may have been a few dozen in the history of our nuclear fleets in the world. The sinking of the Komsomolets [in 1989] was the worst -- there have been fires, people have died when ships have gone down. There have been a few accidents involving nuclear ships in the U.S., but not as serious as in Russia.

What have you learned in your research about past nuclear submarine accidents?

The U.S. started a whole program on deep sea exploration after the USS Thresher sank in 1963. We were asking the question: What happens when a submarine goes down and what happens when a Soviet submarine goes down? How can we find it and learn from it? That spurred a lot of our deep sea exploration, which then spun off into a lot of other exciting things going on now in oceanographic research, like the exploration of the thermal vents in the deep sea crevices and the plants and bacteria that are living there that may have medicinal value, and deep sea creatures.

What are the greatest perils involved in navigating a military submarine?

Running into other boats. U.S. and Soviet submarines ran into each other while trying to chase each other. Or they ran into things like Norwegian fish trawlers.

On the Kursk, for example, if something happened when they tried to shoot weapons from the missile tube and there was an accident inside -- it misfired or it didn't fire -- that's one hypothesis about what the problem was. Another would be if something did go wrong with the nuclear reactor. You could've had a loss of coolant, or a fire where the thing started malfunctioning. Those are all perils.

But what kind of nuclear danger do these ships really pose -- assuming they're not carrying nuclear weapons?

Nothing on the scale of Chernobyl. But if there was a collision, for example, there could have been a fire or some damage to the mechanism that caused a loss of the coolant water, which would cause a meltdown -- the most critical accident that could happen. Even if they did shut down the reactor, there's still a lot of radioactivity there and people could have been exposed to it inside the submarine.

Nuclear submarines have radioactive material on board. If there is a slow leak, after a while this material will get into the ocean. But even with the Komsomolets [a Russian submarine fire off the coast of Norway that resulted in the deaths of 42 sailors], which is considered to be the biggest nuclear submarine accident yet, they say there will be slow radioactive contamination of the water and the fish will be exposed. But it's not an extreme danger to human health. It would take decades, a long time for that to happen.

And the real environmental danger isn't necessarily with operational submarines. In Russia, there have been about 100 submarines that have been decommissioned -- because they are too old or because of provisions in the START II treaty -- and the spent fuel and fuel rods are still on the submarines or on floating barges or land bases that are poorly maintained. The danger to people would be greater if the ship were on land because you would have the danger of [radiation] being carried by air, faster. You would have both land and water contamination. Something has to be done to clean up these messes and put them in safe storage.

Has concern grown in Scandinavia about these ships since the end of the Cold War?

It's a big problem for the Scandinavians because any kind of contamination on land would affect Norway, Russia's close neighbor. The Norwegians and others have been very active in a lot of research and monitoring and practical issues, involved in getting rid of the spent nuclear fuel and other kinds of waste in the region. There are huge nickel plants in Russia and other kinds of factories belching out a lot of chemical contamination that add to the acidification of soil and deforestation, as well, of Scandinavia.

Even with Chernobyl, there was an effect on the ground in Norway. A lot of the native peoples in the region eat things like the mushrooms and the caribou that the natives eat eat the lichen. There's a direct food chain of radioactive and other kinds of contamination that would affect the health of someone in the long run. But it's really difficult to track. There's now an 11-country research program, and they're beginning to look at the effects on health. But until now, there wasn't much data.

Do you think the public should be seriously concerned about this accident and others like it that could happen with the Russian nuclear fleet?

In terms of environmental impact, we'll take a wait-and-see attitude toward the northern fleet. That region is one of the worst as far as radioactive contamination by past or present risk. I think Greenpeace would take a stronger environmental stance than I would, but in terms of catastrophe, there haven't been any major ones.