Who cares about old guys and young girls? This handsome romantic slop finds other problems. 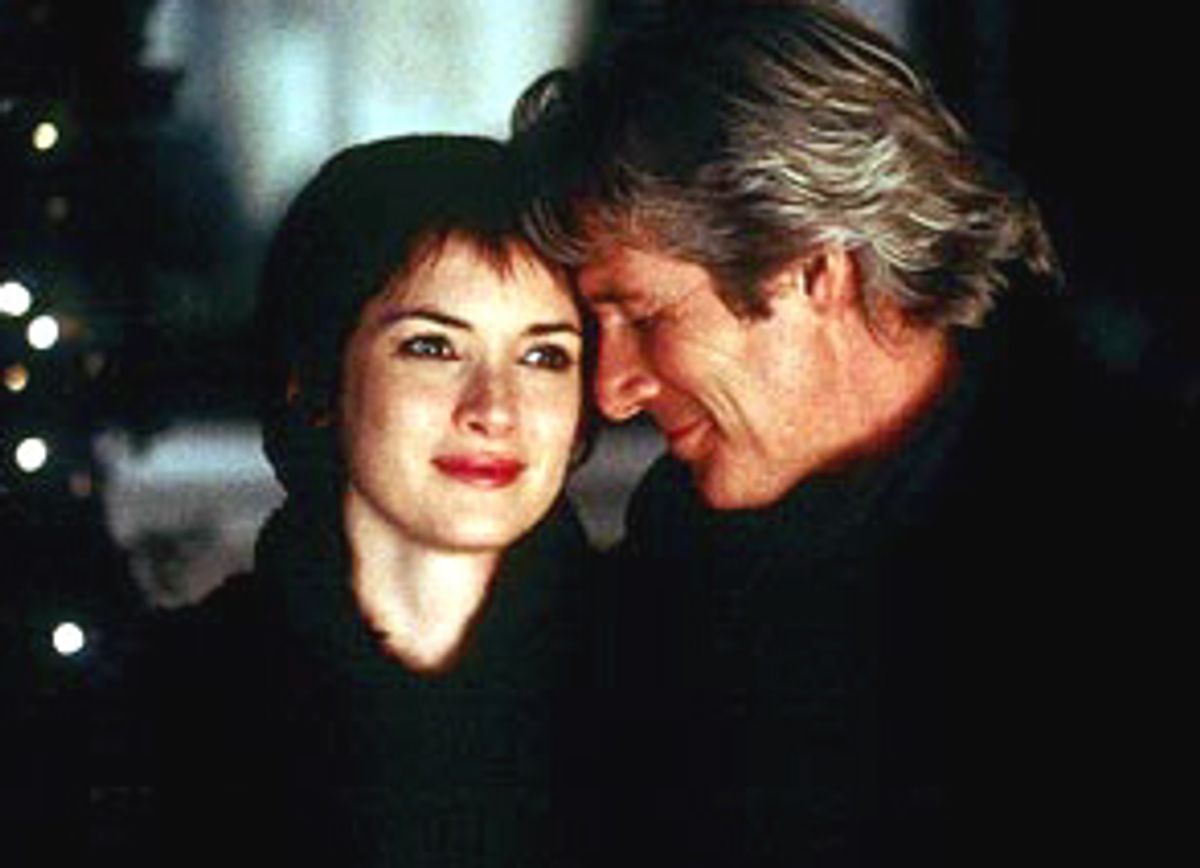 A couple of weeks ago, the tabloid news show "Inside Edition" featured perhaps the most absurd report on the hot-button topic of movie matches between younger women and older men. Hailing the pairing of Michelle Pfeiffer and Harrison Ford in "What Lies Beneath," the show claimed that this may be the start of a trend in which older actors costar with women close to their age. The kicker was the report's final line: "Michelle Pfeiffer is 42. Harrison Ford is 58." Try to imagine "Inside Edition" being as enthusiastic about this pairing 20 years ago, if a 38-year-old Ford had turned his attentions to a 22-year-old Pfeiffer.

The only relevant question to ask about any romantic pairing is, "Does it work?" And the answer is sometimes it does (Pfeiffer and Sean Connery in "The Russia House," Ford and Anne Heche in "Six Days, Seven Nights") and sometimes it doesn't (Woody Allen and Julia Roberts, or Helena Bonham Carter, or Mira Sorvino ... you get the idea). Age shouldn't be an automatic barrier to pairing actors who might strike sparks any more than any other arbitrary thing, like race, or gender for that matter. And certainly it is a hypocrisy that younger men are not often cast with older women (though the current French film "An Affair of Love" is a pretty good argument for why they should be), but that's irrelevant to whether older men and younger women can sometimes strike sparks with each other.

What's fascinating about "Autumn in New York," which was written by a woman (Allison Burnett) and directed by a woman (the actress Joan Chen), is that the first half of this romance seems to delight in rubbing the audience's nose in just this sort of movie pairing that drives some people mad. Now, this is a different distinction. Is it rubbing those of us who believe this shouldn't happen in real life, or those of us who think that it shouldn't happen in the movies?

In the film, 50-year-old Richard Gere plays a womanizing restaurateur whose becomingly graying head is turned by 28-year-old Winona Ryder, a vaguely well-to-do sweet young thing who appears to spend most of her time designing silly hats and fussing with the beaded curtains in her dreamy dreams boudoir. Some characters chastise Gere as being too old for this creative cupcake (like Ryder's grandmother, Elaine Stritch doing yet another of her phony boozy-old-broad routines) but the audience, which has come to see a love story, knows to reject those naysayers as the enemies of romance. From the first shots of New York done up in its fall colors while Gabriel Yared's mood music tinkles prettily on the soundtrack, the audience settles in to sigh and sniffle.

For a while, it's hard to blame them. I didn't see Joan Chen's first movie "Xiu Xiu: The Sent-Down Girl" (and I hope her move to directing means we won't be deprived of her glamorously enigmatic performances, like in the little-seen Australian film "Turtle Beach"), but "Autumn in New York" is handsomely produced romantic slop. This summer movie season hasn't provided any love stories or romantic comedies yet, and though MGM released the movie last Friday without screening it for critics, the weekend grosses suggest they've got a hit.

Seeing "Autumn in New York" during August in New York, at the end of one of those steaming summer weeks that makes living in the city feel like a curse, it was a treat to watch montages of golden leaves and imagine walking a half a block without needing a shower. Lushly shot by Chang Wei Gu, the film pulls off that old movie trick of making Manhattan look like a succession of tree-lined streets, vast green parks and spacious apartments. Nobody has any money worries and the pace of city life has apparently not interfered a jot with their comfy indolence. Daydreaming should be one of the functions of movies and "Autumn in New York" lets you fantasize that you're lingering in some tastefully swanky restaurant while the pianist plays one well-chosen standard after another.

Especially because it has the thing that almost never fails to sell love stories: incurable disease. "I'm sick," Ryder reveals to Gere after their first night together, and you know that it's only a matter of time before Kleenex is being fished out of pockets and handbags all over the theater. But Burnett and Chen put Ryder's tragic ailment (that particular brand of movie sickness, so offensive to any of us who've actually watched someone die, where the person gets more radiant as they get sicker) to some very interesting uses. It becomes something like punishment for Gere, the thing that will make Ryder the one girl a womanizer can't get over.

When did movie romances become so anti-sexual? It's not enough for Gere's character to be a Lothario who happily gives up his wandering ways when he finds true love. He's unhappy, though he doesn't know it. But is he? There's a subplot involving Gere's reconciliation with his grown daughter (Vera Farmiga), and we're told that Gere broke the heart of Ryder's deceased mother (though the two were not lovers). The movie offers no evidence that Gere's character does any harm. He's much more the pursued than the pursuer. The women who seek him out at his restaurant are all trendy, shallow young things who want to bag an eligible bachelor who's made the cover of New York magazine. And having done so, they'll probably move on to their next conquest. But in terms of the moralism that has taken over movie sex, "Autumn in New York" takes it upon itself to teach us that someone whose relationships are devoted to sexual pleasure is leading an empty life.

The strategy backfires, not just because the women around me were swooning over Gere from the moment he came on-screen, but because "Autumn in New York" winds up making a much stronger case for older men than it does for younger women. That's chiefly because middle-age suits Gere so much better than youth did. He's handsomer now and more relaxed on camera. He doesn't feel the need to impress us with the phony intensity that was his stock in trade. Gere isn't as casually likable as he was in last year's "Runaway Bride"; there's only so much an actor can do in a role that requires him to stand around looking heartsick and bereft. But he's a far more appealing presence than Ryder, whose performance is the most narcissistic display from any young actress in recent memory.

What happened to the marvelous actress of "Beetlejuice," "Mermaids" and "Little Women"? Being adored has not done wonders for Ryder. She's approaching that dangerous Jodie Foster territory where your reputation as a serious actor goes up as your performances get blander. (Though she's yet to equal the amazing self-aggrandizement of that shot in "Contact" where crippled children assemble on the steps of Congress to gaze at Foster.) If "Autumn in New York" had been a different, tougher movie, it might have examined why middle-aged men fall for young girls like this, the type whose complete self-involvement they mistake for winsome charm. Chen makes that same mistake. And so as Ryder winkles and twinkles and giggles her way through the part, as she toys with her little projects in the manner of a kid at the trendiest arts-and-crafts camp imaginable, as she attends a Halloween party dressed as Emily Dickinson (surely Sylvia Plath would have been a more appropriate choice), as she prances through the movie batting her big dark eyes, we're cued to think she's just as adorable as she does. It's a princess performance. When we learn that Ryder's character has instructed that no heroic measures be taken when she becomes ill, I began to suspect that she'd figured out the perfect capper to her princess fantasy. What becomes a sprite more than an early, tragic death? Now, if Ryder would just figure out what becomes an actor, we might see the charm she once didn't have to fake.