The scientist who first theorized that our planet is a biological organism, not merely a rock, discusses life on Earth and the possibilities for its future. 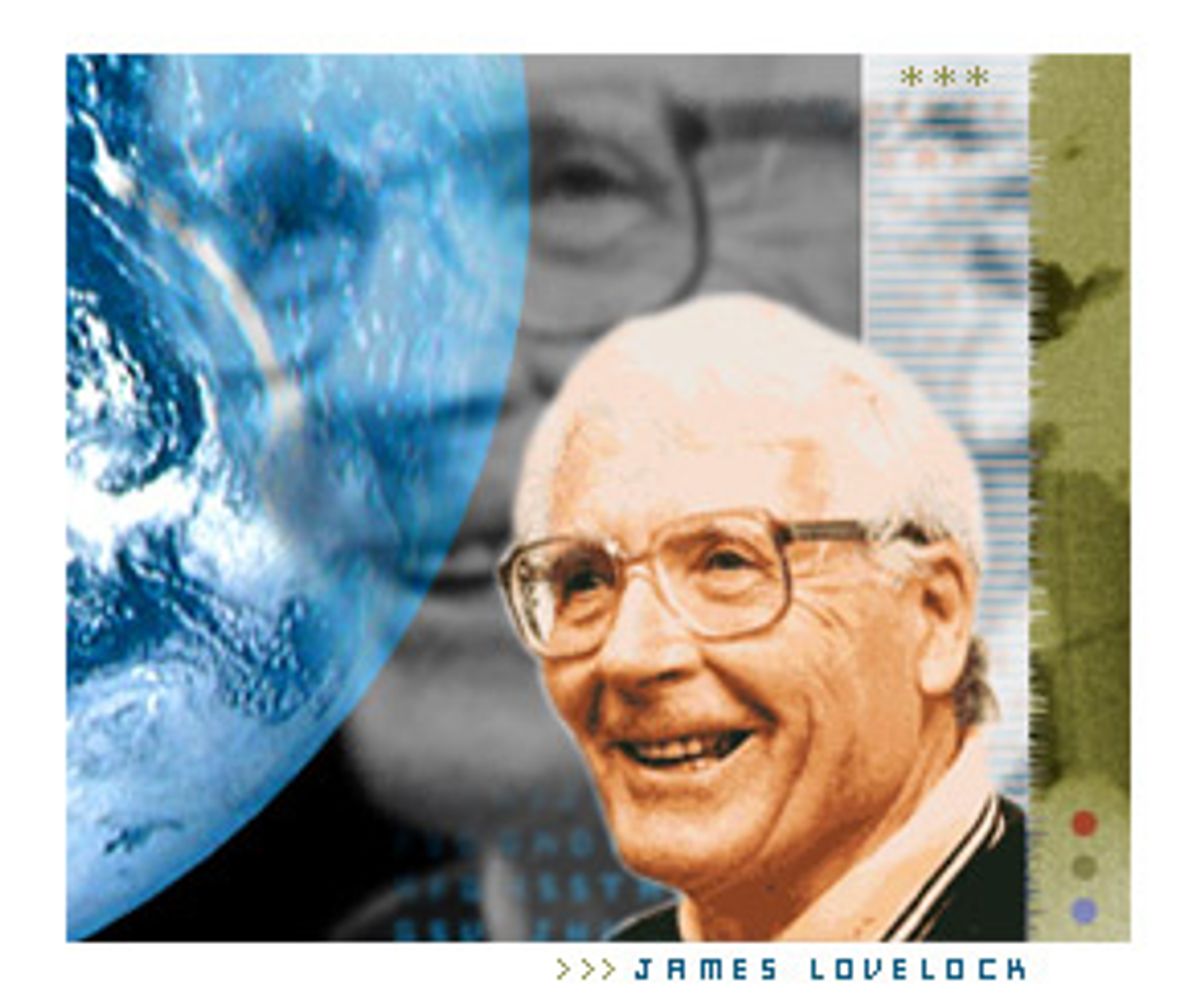 James Lovelock is an independent atmospheric scientist who lives and works deep in the English countryside. He has a knack for making discoveries of global significance. Lovelock is the inventor of the electron capture detector, a palm-size chamber that detects man-made chemicals in minute concentrations. In the late 1950s, his detector was used to demonstrate that pesticide residues were present in virtually all species on Earth, from penguins in Antarctica to mother's milk in the United States. This provided the hard data for Rachel Carson's landmark 1962 environmental book, "The Silent Spring," which launched the international campaign to ban the pesticide DDT.

In the late 1960s, Lovelock sailed from Britain to Antarctica and with his detector discovered the ubiquitous presence of CFCs (chlorofluorocarbons), man-made gases now known to deplete the stratospheric ozone layer.

Today, Lovelock is best known as author of the "Gaia hypothesis," named after Gaea, Greek goddess of earth. The hypothesis states that the global ecosystem sustains and regulates itself like a biological organism rather than an inanimate entity run by the automatic and accidental processes of geology, as traditional earth science holds. In essence, Lovelock's hypothesis sees the surface of the Earth as more like a living body than a rock or a machine.

He first conceived the Gaia hypothesis while working at the Jet Propulsion Laboratory in Pasadena, Calif., in the mid-1960s, where he was designing life detection instruments for NASA's Mars Viking probes.

How, Lovelock asked himself, if he were on Mars, could he tell there was life on Earth? By the Earth's atmosphere, which defies all natural expectations. Free oxygen accounts for 20 percent of the atmosphere, when the laws of chemistry say that this highly reactive gas should combine and settle down. How fortunate for life, most of which depends on oxygen for survival.

Lovelock concluded that life -- microbes, plants and animals constantly metabolizing matter into energy, converting sunlight into nutrients, emitting and absorbing gas -- is what causes the Earth's atmosphere to be so, well, lively. By contrast, the Martian atmosphere is essentially dead, settled into a low-energy equilibrium with little or no chemical reactions. So he recommended that NASA save its money and scrub the Viking mission. Carl Sagan, his officemate, did not agree but Sagan's then wife, microbiologist Lynn Margulis, took Gaia to heart.

Lovelock and Margulis, considered coauthor of the Gaia theory, soon discovered other bits of "good fortune." Although the sun has strengthened steadily, the Earth's surface temperature has stayed comfortable for life for hundreds of millions of years. The same for oceanic salinity, which remains far below the saturation point and well below concentrations lethal to aquatic life, even though millions of tons of salt run off into the oceans and seas each year.

In 1988, the American Geophysical Union sponsored a highly controversial international scientific conference on the Gaia hypothesis in San Diego, and since then, scores of articles on Gaian science have been published in Nature, Science and other scientific journals, as have dozens of books.

Today, Margulis is one of the most honored scientists in the world; she received the President's Medal of Science in 1999. Lovelock, now 81, has gone from outsider to grand old man, receiving a slew of environmental and scientific awards and honors in the United States, Europe and Japan. He is an honorary visiting professor at Oxford University. This past June in Valencia, Spain, I caught up with him and his wife, Sandy, at the second AGU conference on the Gaia hypothesis.

Your first book, "Gaia: A New Look at Life on Earth," was a bestseller, embraced by radical environmentalists, goddess worshippers and New Age philosophers -- but not scientists, most of whom dismissed your ideas. Do you think that if you had named it the "Lovelock Hypothesis," or the "Biogeochemical Hypothesis," things would have gone smoother?

Undoubtedly, though I don't regret the name Gaia for a moment. It was suggested by William Golding (Nobel Prize-winning author of "Lord of the Flies"). Gaia embraces the intuitive side of science as well as the rational. It makes the theory a personal presence, more accessible to the nonscientist. Vaclav Havel, who's considered something of an intellectual saint here in Europe, has embraced Gaia philosophically.

Still, it has been a bruising battle. I've devoted most of my working life to Gaia. Most of my research has been self-funded. I could never get a grant. No surprise, though. If you start any large theory, such as quantum mechanics, plate tectonics, evolution, it generally takes about 40 years for mainstream science to come around. Gaia has been going for only 30 years or so.

In your new book, "Homage to Gaia," which will be published this fall, you write that after first viewing photographs of Earth taken from space, you came to see our planet "as much more than just a ball of rock moistened by the oceans or a spaceship put there by a beneficent God just for the use of humankind. I saw it as a planet that has always, since its origins nearly four billion years ago, kept itself a fit home for the life that happened upon it and I thought that it did so by homeostasis, the wisdom of the body, just as you and I keep our temperature and chemistry constant." Is this still your vision of Gaia?

Yes. Life clearly does more than adapt to the Earth. It changes the Earth to its own purposes. Evolution is a tightly coupled dance, with life and the material environment as partners. From the dance emerges the entity Gaia.

Oxford University's Richard Dawkins, author of "The Selfish Gene," has condemned Gaia theory as a "profoundly erroneous" heresy against Darwin's "survival of the fittest" theory of natural selection. That's because Gaia theory holds that animals, plants and microbes not only compete but also cooperate to maintain their environment. However, Dawkins' mentor, William Hamilton, the distinguished evolutionary biologist who coined the phrase "the selfish, spiteful gene," recently proclaimed you "a Copernicus awaiting his Newton." Why the turnabout?

Bill Hamilton and I fought like cats. It was a very difficult association. Eventually, Bill, whose untimely death I mourn, said, "You've convinced me that the world does self-regulate. But that could not happen via [Darwinian] natural selection." Then he and my student, Timothy Lenton, published a paper together, "Spora and Gaia," exploring how these regulatory mechanisms might develop. Bill came to see the ideological battle between Gaia and the selfish gene as pointless. In a sensible world, we need them both.

You've said, "Natural selection favors the improvers." What exactly do you mean by that?

I mean that nature favors those organisms which leave the environment in better shape for their progeny to survive.

At the Gaia 2000 conference, someone asked, "What would happen if the Sahara Desert were replaced with vegetation?" The answer, in a nutshell, was more rainfall, cloud cover and cooler weather in Egypt and, especially, western Africa. Some rainfall might be drawn away from the Caribbean. Now, this was simply a thought experiment, but what if someone actually did try to forest the Sahara, or some other desert? There's lots of talk these days about massive tree plantings to offset global warming. Do you think that's a good idea?

Doesn't work. The French tried that sort of thing at the turn of the last century. Sadly, it's much easier to create a desert than a forest. There's evidence that portions of the Pakistan desert were forested in biblical times. It appears that much of the Australian outback was once forested, lost to the dreadful tradition of fire-drive hunting. Now it's desert as well. The tropical rain forests in the Amazon and Malaysia do not respond well to deforestation and are going to desert. This is because those rain forests make their own rain, rather than benefiting from the rainfall that would occur, say, from ocean breezes sweeping up a mountain range, as, for example, is the case with the Costa Rican rain forest.

Your doctorate is in medicine, training that has led you to regard the Earth's body as having "vital organs" -- key regions that, if debilitated, could imperil the health of the global ecosystem as a whole.

Yes. The tropical rain forests are a telling example. Once cut down, they rarely recover. Rainfall drops, deserts spread, the climate warms.

Perhaps genetic engineering will save the day. For example, genetic engineers now feel that rubisco, the enzyme primarily responsible for photosynthesis, could eventually be tinkered with to work 1,000 times as fast. Trees might sprout up in weeks, not years. Do you see that sort of thing as a boon to our future, or a threat?

I don't really know; you'd have to ask Lynn Margulis. I suspect any worries about genetic engineering may be unnecessary, from a Gaian perspective. Genetic mutations have always happened naturally, anyway. Of course there may be short-term problems, but as far Gaia goes, it's a minor event.

Of course, from the human perspective events might not be so minor. Are we, as a species, in danger of extinction?

Human beings are very tough and will survive -- have survived for at least a million years. Civilizations, though, are fragile. Thirty or so have come and gone in the past 5,000 years. And there's no reason to assume that ours is permanent. Indeed, there is little evidence that our individual intelligence has improved through recorded history.

Has the global environment improved or deteriorated over the past 30 years?

It has deteriorated considerably.

Then global warming is truly a problem?

Yes, its grim effects will become apparent later on in this century.

Do you oppose nuclear power?

No. If a power station were to be built down the road, I'd prefer a nuclear plant over an oil burner, and definitely over a coal burner. We simply have to lessen our consumption of fossil fuels. Take the automobile, that dreadful invention that we can't seem to do without -- too many people driving too many cars and burning too much fossil fuel.

E.O. Wilson has called for a spiritualization of the environmental movement. He says we need to invest some of the passion now reserved for traditional religion into caring for our environment.

I agree wholeheartedly. I am a great admirer of his. I especially like Wilson's characterization of human beings as unfortunate tribal carnivores that have acquired intelligence.

But Wilson is an atheist. So isn't he saying, in essence, "Here's what everyone else should believe?"

I'm a scientist, not a theologian. I don't know if there is a God or not. Religion requires certainty. Revere and respect Gaia. Have trust in Gaia. But not faith.

What is our duty to posterity?

To leave the right message behind so that our successors can correct the mistakes we've made.

Lawrence E. Joseph is the author of "Gaia: The Growth of an Idea." He lives in New York.