Clinton's last shot was a sexy, cinematic one. 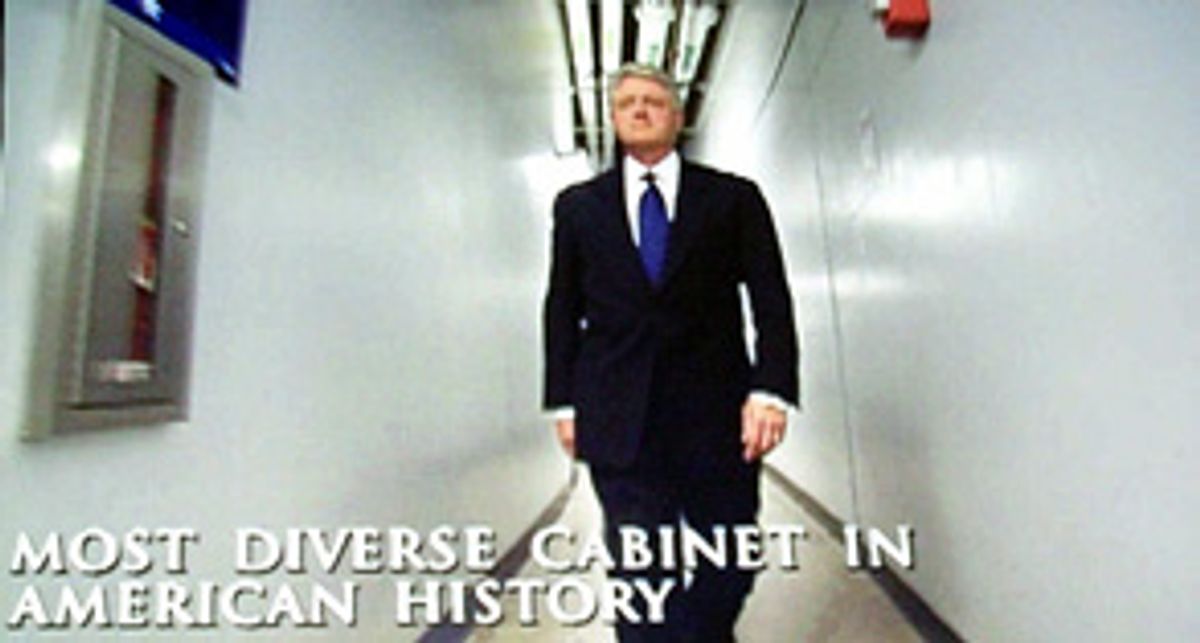 Anyone with a sense of cinematic occasion knew to watch President Clinton's Monday night speech to the Democratic National Convention. This was likely the last great occasion Clinton would have for talking to the nation. It was the moment at which he was supposed to hand over the reins, or the lead role, to Al Gore -- no matter that that was like Elvis doing warm-up for Gregory Peck. And the whole thing was happening in Los Angeles -- at Clinton's insistence -- so that he could audition for his people. He'd actually wanted to speak on Tuesday, eroding Gore's space a bit more, but the managers persuaded him to do Monday so he'd get the bounce from the football game (a rematch of the last Super Bowl).

So, were you ready for a real turn-on? No one could have dreamed up his entrance -- no one but Clinton himself, that is. For there he was, apparently half a mile from the stage, with a long, tight corridor to advance down. Did he advance? He strode toward a low-slung camera tracking back as fast as it could to keep out of his way. And this driving shot went on and on, with rousing music, the president's air and aura seeming to force back the fluttery membrane of the white corridor walls, the passage ... are you getting the message?

It was a shot worthy of Stanley Kubrick, and a damn ridiculous way for a speaker to get to the stage -- unless it had been planned and shaped and executed in every detail. In other words, this strange, carnal passageway had been built and created so that the irresistible probe, the Bill, the dick, could thrust through it. Somehow, he made us open our legs. He wasn't just auditioning as an actor, he was showing his stuff as set designer and director!

All of which may give you a hint of how contrite Clinton is about Monica Lewinsky. I'm not saying that he worked it all out in cold blood so that it was he and his Willard (as Joe Eszterhas has put it) pushing back the walls and then bursting out into the blazing light of adulation. No, he's not that coldblooded. That's just the way he thinks about his love affair with the people. He wants to fuck us (in the nicest way), and that's what he got to do Monday night. And that's why he still looks as cheeky, as confident and as hard-on as the comeback kid. He's cock-a-hoop now because he knows we know he could get a lipstick babe like Monica on her knees and any other way he could think of. He's had the cheerleader -- so cheers mean all the more to him.

What we saw (and submitted to) Monday night in his terrific entrance was pure seductive mise-en-schne, the natural expression of someone who dreams in movie shots and who has entirely absorbed the affinity of public presentation and sexual attitude. Given the rest of his life, Gore wouldn't dare think of an entrance like that, let alone do it, carrying it all the way without a flicker of shame or irony.

When you think about the self-delight in the chronic horniness of Clinton, it's clear we got off lightly with just Monica, Gennifer Flowers and Eszterhaz's dream of Sharon Stone. But now we face the main event: Civilian Bill -- the Movie. Can he match that one shot? Or does he have a whole show in mind?