Venezuela's president is playing with fire

By David A. Wernick 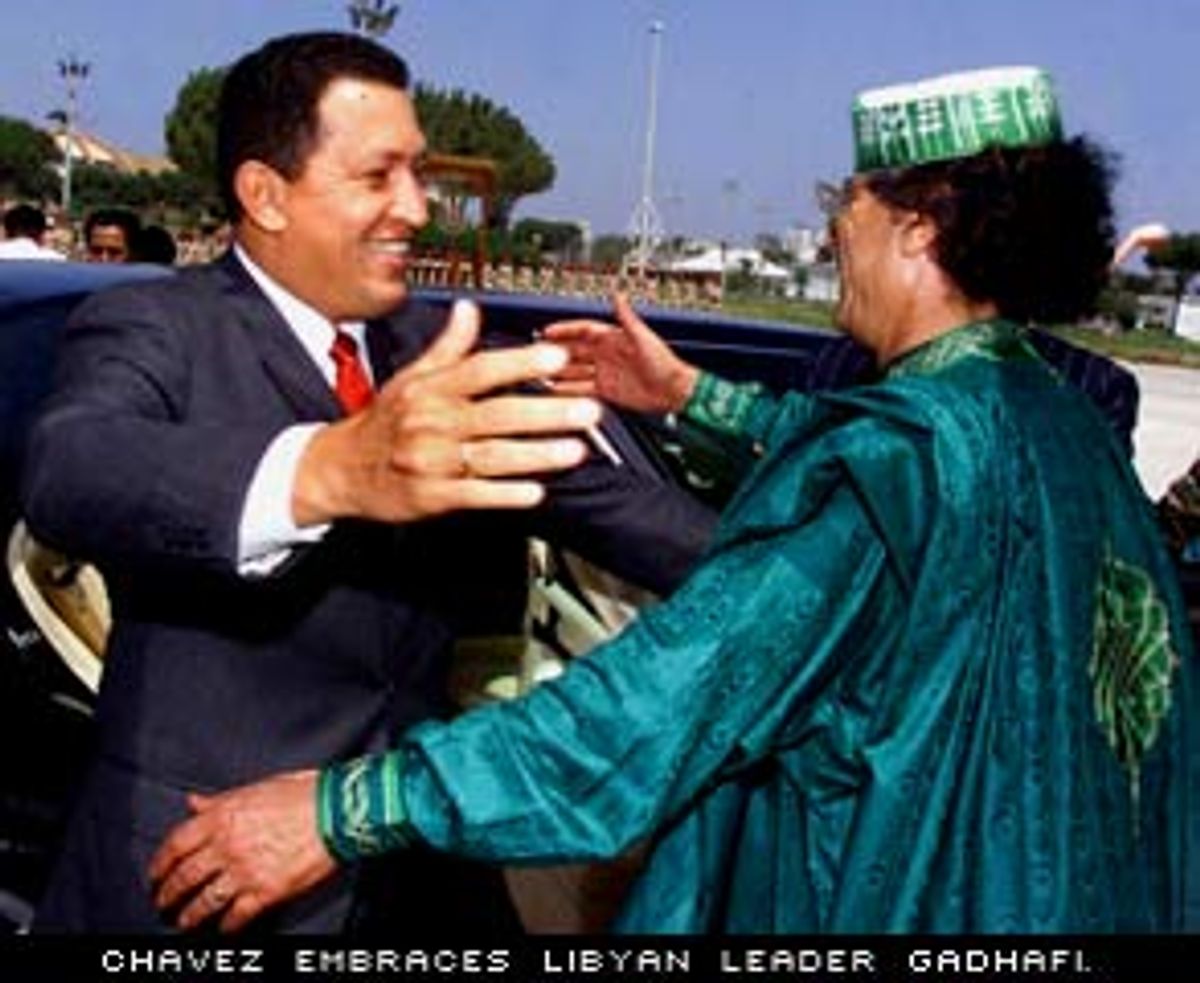 One thing about Venezuelan President Hugo Chavez is certain: He's got chutzpah. Last Thursday, the charismatic 46-year-old former paratrooper waltzed into Iraq, in defiance of U.S. wishes, becoming the first democratically elected head of state to visit Baghdad since the 1991 Persian Gulf War. While in Baghdad, Chavez supped with Saddam, toured the city in one of his chauffeured limousines and denounced the U.S. for intervening in Venezuela's sovereign affairs by suggesting that he call off the visit.

After a brief stopover in Jakarta, Indonesia, where Chavez called for an end to U.N. sanctions against Iraq, he flew on to Tripoli, Libya, for a weekend meeting with Libyan strongman Col. Moammar Gadhafi. Chavez used the occasion to take another jab at the United States by calling Washington's 1986 bombing of Tripoli and the port city of Benghazi a "criminal act."

Chavez's anti-American broadsides come as no surprise to observers of Venezuelan affairs. "El Commandante" has thumbed his nose at Washington on more than one occasion during his first year and a half in office. He's traveled to Havana and pitched a baseball game against his idol, Fidel Castro, denied U.S. anti-drug planes permission to use Venezuelan airspace for reconnaissance flights and initiated informal contacts with leftist guerrillas in neighboring Colombia. Chavez's decision to visit Iraq, however, is his most daring gambit to date, putting his bilateral relationship with the United States in jeopardy and alienating the investors whose dollars he needs to fulfill his "peaceful revolution."

Why is Chavez picking a fight with his nation's biggest trading partner and its largest source of foreign direct investment?

Peter Hakim, president of the Inter-American Dialogue, a Washington think tank, speculates that the answer has something to do with Chavez's personality. "The Venezuelan leader craves the limelight. He loves being feted by the Chinese leadership and third-world dictators," he says.

"Chavez is a showman and his foreign adventures are part of his populist shtick," agrees David Becker, a professor of government at Dartmouth College and a specialist on Andean affairs. Becker says cozying up to people like Hussein and Gadhafi in order to "stick a finger in Uncle Sam's eye" is all part of Chavez's act.

Oil may also have something to do with it. Crude exports account for about 80 percent of Venezuela's exports and one-third of its gross domestic product. By patching up its tattered relations with its OPEC partners (relations deteriorated under previous Venezuelan governments due to allegations of quota busting), Chavez believes he can help control supply and thereby keep prices high. He aims for a floor of $25 per barrel, which would provide enough revenue to fund his domestic social agenda without forcing his government to resort to unpopular belt-tightening measures that have been implemented elsewhere in the region.

Another theory is that Chavez's globetrotting is an attempt to deflect attention from the fact that Venezuela's economy continues to perform poorly. Last year, despite a tripling of oil prices, gross domestic product shrank by a staggering 7.2 percent. This year has seen an improvement, but nothing on the order of what Venezuela needs to combat unemployment and eradicate poverty, which afflicts 80 percent of the nation.

"Chavez is obviously trying to provoke a strong reaction from the U.S., to fire up nationalist sentiment at home and get people's minds off the fact that he hasn't delivered," says Mark Falcoff, a senior fellow for Latin America at the American Enterprise Institute in Washington.

Up until now, the U.S. has taken a very low-key approach to the Venezuelan caudillo in hopes of encouraging Chavez to play by the democratic rules of the game and embrace market-oriented policies. That may change if Chavez continues his provocative behavior.

Indeed, some analysts say such a change is already underway. "Chavez's trip to Iraq reinforced the position of those within the U.S. government who view the Venezuelan president as irresponsible, antagonistic and perhaps not in control of all of his faculties," says Hakim. He predicts that relations will cool in the coming months.

Some observers foresee a possible increase in bilateral tensions after the November U.S. presidential election if Texas Gov. George W. Bush wins the White House. Among them is Bernard Aronson, a former assistant secretary of state for international affairs in the Bush administration. Aronson, who is now managing partner at Acon Investments in Washington, notes that congressional Republicans have been highly critical of President Clinton's counter-narcotics strategy and Chavez's refusal to grant over-flight rights to U.S. anti-drug aircraft. They may be less willing to "roll with the punches" with one of their own in the Oval Office.

What's more, Aronson points out that several of Bush's closest foreign policy advisors have been very outspoken in their criticism of Hussein's regime and hinted that the Texas governor, if elected, might actively seek to overthrow it or at least destabilize it. This could complicate Washington's delicate relationship with Caracas, given Chavez's budding friendship with Hussein.

But not everyone thinks the row between the U.S. and Venezuela is likely to escalate into a more serious breach.

"Rhetoric aside, the fact of the matter is that Chavez has been very pragmatic on economic policy and investors realize this," says a high-ranking U.S. diplomat. He notes that Chavez has slashed Venezuela's bloated bureaucracy, established a petroleum stabilization fund to recycle windfall oil profits, scrupulously upheld contracts with foreign oil companies, opened the gas and petrochemicals sectors to private capital, introduced a world-class, market-oriented telecommunications law and signed a bilateral tax treaty with the United States. "While Chavez's antics have been foolish, there is simply no basis for a hostile U.S. response."

And Chavez's oil strategy could protect him. Susan Kaufman Purcell, vice president of the Americas Society in New York, argues that Venezuela's position as one of the United States' top foreign oil suppliers gives Chavez tremendous leverage in his dealings with Washington. As such, she expects U.S. policymakers to continue handling Chavez with extreme care while trying to avoid a blowup at all costs.

Besides, she says, any decision to lash out against Chavez -- for example by imposing unilateral sanctions or revoking his visa -- could end up strengthening the aura around him as a nationalist hero engaged in a David vs. Goliath battle with the colossus to the north. "Nobody wants to create another Castro," she says.

Ultimately, most analysts believe that level heads will prevail and that the U.S. and Venezuela will find a modus vivendi given the United States' interest in dependable oil supplies and stability in the volatile Andean region -- and Venezuela's need for U.S. trade, investment and technology.

Few, however, rule out the possibility of a more serious falling out in the future, given Chavez's quasi-messianic complex and penchant for political grandstanding. "At first, Chavez wanted to convince people that he was the second coming of Simon Bolmvar, the great liberator of South America. Now he wants to be known as Chavez of Arabia. Unfortunately, it seems that neither Gandhi nor Mandela is in his repertoire," says former Venezuelan Ambassador to the United Nations Diego Arria.

David A. Wernick is New York-based writer who specializes in Latin American business and political affairs.

MORE FROM David A. Wernick