Say what you will about Al Gore's clunky acceptance speech. He gave it his darnedest. 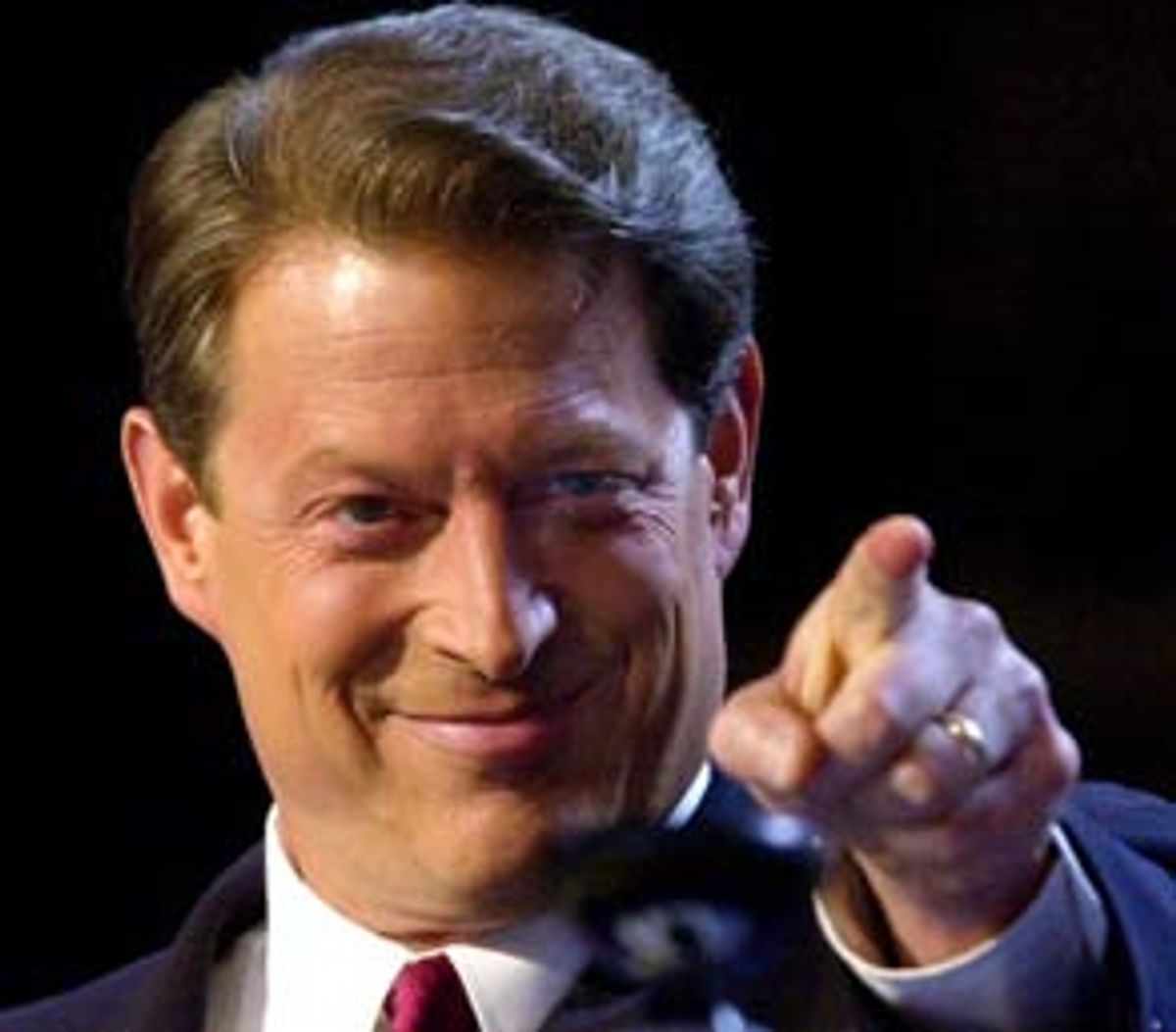 Vice President Al Gore's horoscope in the Los Angeles Times Thursday, the most auspicious day of his political life, read: "New opportunity presents itself. Show confidence, you are going places. Circumstances will begin turning in your favor. Leo figures prominently."

After Gore was introduced at the Democratic National Convention Thursday night by his wife Tipper -- a Leo -- he did his darnedest to set this astrological prediction to work.

Gov. George W. Bush's speech at the Republican National Convention two weeks before was full of rhetorical flourish, literary allusions and complete and utter misrepresentations of what Bush actually thinks. (Bush's kind words about President Clinton, for instance, masked a complete and total resentment.) Even Bush's fabled smirk was muffled, stifled with all his psychic energy into the depths of his gastrointestinal system.

Gore, conversely, decided to be Gore tonight. He even wrote the speech himself, and you could tell. The former just-the-facts cub reporter for the Nashville Tennessean spoke a work of rote pacing and flat language.

Seeming comfortable in his skin, he even alluded several times to his aggressiveness, attempting, like he did during his primary battle with Sen. Bill Bradley, to elevate his combative nature into an image of Gore as a Fightin' Man -- fighting for you, fighting for working families, fighting against the special interests.

But being Gore -- as opposed to being whatever the hell Bush and the GOP were pretending to be in Philadelphia -- is a for-better-or-for-worse-kind of deal. Smart, but long-winded. Serious, but, well, way too fucking serious. Still not quite able to use the word "love" without it sounding a tad contrived. After an hour's worth of traditional Democratic campaign promises -- offset occasionally by some biographical information that a shocking number of voters remain unaware of -- Gore himself even acknowledged his problems as a candidate.

And in doing so -- perhaps in the same way that his running mate, Sen. Joe Lieberman, gets away with being such a wonky dweeby dad-figure since he embraces the wonky dweeby dad he is, rushing toward it, embracing it, loving it, laughing at his own bad, dad-like jokes -- Gore attempted to even remind us that the presidency shouldn't be about the superficial qualities Bush has and he lacks.

The presidency, Gore argued, "is a day-to-day fight for people. Sometimes you have to choose to do what's difficult or unpopular. Sometimes, you have to be willing to spend your popularity in order to pick the hard right over the easy wrong ... If you entrust me with the presidency, I won't always be the most exciting politician. But I pledge to you tonight: I will work for you every day and I will never let you down."

The Fight Club theme was sparingly used, but when he trotted it out, it seemed fairly effective. Mentioning a handful of honest, God-fearing Americans whose problems he had heard about on the campaign trail -- problems that Gore said he could solve through policies or government programs -- he took aim at "powerful forces and powerful interests" (read: corporate America and the Republican Congress) standing in the way. These are powers, not coincidentally, that have lined up behind Bush.

Gore even called them out. "Big tobacco, big oil, the big polluters, the pharmaceutical companies, the HMOs," were his rogue's gallery, like a roster of antagonists from a succession of John Grisham novels. The victims included Jacqueline Johnson from Missouri (swing state!), a senior citizen who eats mac and cheese every day so she can pay for her prescription pills, for whom Gore promised a prescription drug benefit. Designated bad guys Gore will fight: pharmaceutical companies who are currently "run[ning] up record profits."

There was George and Juanita Gutierrez from Texas (ouch!), whose daughter Caterina attends a crumbling elementary school. Designated bad guys Gore will fight: Bush, and those who won't agree to pony up the $130 billion Gore wants to devote to education.

And of course, there was Ian Malone from Washington (swing state!), the little boy whose HMO denied him coverage until Gore championed his cause on the campaign trail. With modesty, or defensiveness because of his long record of self-puffery, or perhaps just the knowledge that folks like me who know the story would give him the credit, Gore didn't say that he had anything to do with the HMO's capitulation on Malone's coverage. "But no family should have to go on national television to save their child's life," he said. Designated bad guys Gore will fight: HMOs.

Bad guys thrown in there without any anecdotal hard-luck victims: tobacco companies that market "to our children," those like Bush who want "to strip one out of every six dollars from the Social Security trust fund and privatize the Social Security that you're counting on," and of course, Bush and others who want to give away "a huge tax cut for the wealthy at the expense of everyone else and wreck our good economy in the process."

Under Bush's plan, Gore said -- without naming Bush even once -- "for every $10 that goes to the wealthiest 1 percent, middle-class families would get one dime and lower-income families would get one penny." The average family would only get enough cash "to buy one extra Diet Coke a week," Gore said. "About 62 cents in change. Let me tell you, that's not the kind of change I'm working for."

The audience went wild at this, his one joke. "That's the difference in this election," Gore said. "They're for the powerful, and we're for the people."

Stealing the catch phrases of both business and labor, he pledged both free and fair trade. Because he's a New Democrat, he made sure to mention that he's one of the few Democrats (along with Lieberman) who supported the Gulf War. A welfare reformer. A man who wants to "challenge a culture with too much meanness and not enough meaning."

Gore's own mean streak reared its horned head during the primaries, and so tonight he explained the heart within fightin' Al Gore, the one America has yet to really meet. Biographical snippets were thrown in hither and yon. He volunteered in 'Nam, worked as a police reporter at the Tennessean, became a crusading anti-toxic waste congressman -- but only after having a daughter who convinced him that he "could not turn away from service at home -- any more so than I could have turned away from service in Vietnam." (Unlike certain others.)

Tipper's introduction of her husband was replete not only with her alarmingly arhythmnic dancing but also, fittingly, an Erich Segal-esque saccharine biopic and the disco hit "Turn the Beat Around."

"Only a vice president of the United States gets a second chance to make a first impression," quipped former White House press secretary Mike McCurry. "Politically, he became his 'own man' tonight."

Indeed, he did. And in case you missed it, he even said at the start of his speech that he was "stand(ing) here tonight as my own man." After his deflated climax, Gore was joined on stage by Tipper, then Lieberman, then a whole bunch of Democrats who've been part of this interesting, disjointed, disorganized, unpunctual convention, where growing pains creaked.

"It must be frustrating for my Democrat counterparts trying to manage the message these days," John Czwartacki, spokesman for Senate Majority Leader Trent Lott, R-Miss., e-mailed me the other day. "Nightly news and morning papers teeming with the sad and pitiful story of an entire vessel sunk with almost no hope of rescue. All because a political leadership -- thought reformed from their rejected ways -- cannot escape its old guard instincts that are so offensive to citizen onlookers.

"Then there's the story of the Russian sub."

That might be a bit much, but Gore certainly laid out his campaign message tonight. And, as with the "I stand here tonight as my own man" bar mitzvah speech excerpt, in case we missed it, they replayed it on the TV as the balloons fell and the music pumped. An instant replay of comments Gore had made just minutes before.

"SO I SAY TO YOU TONIGHT," he bellowed, "IF YOU ENTRUST ME WITH THE PRESIDENCY, I WILL FIGHT FOR YOU."